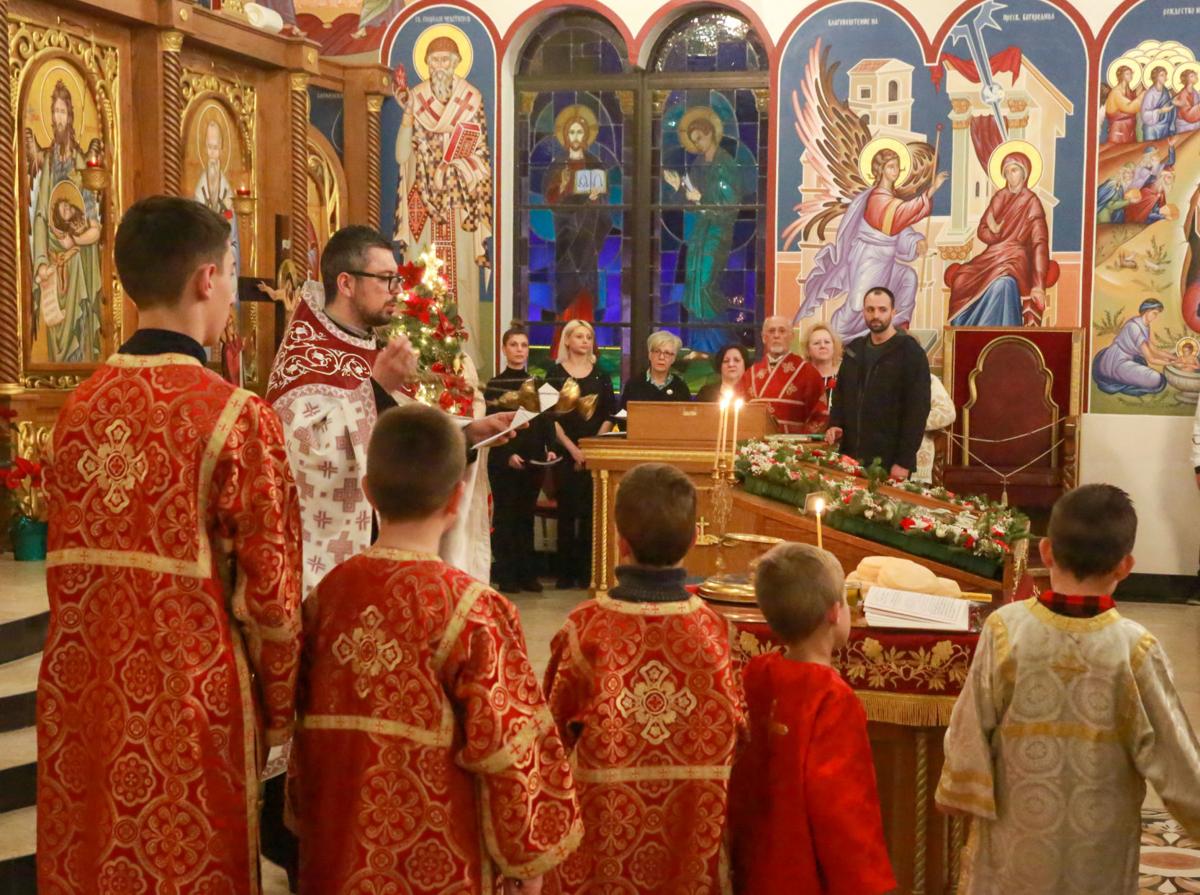 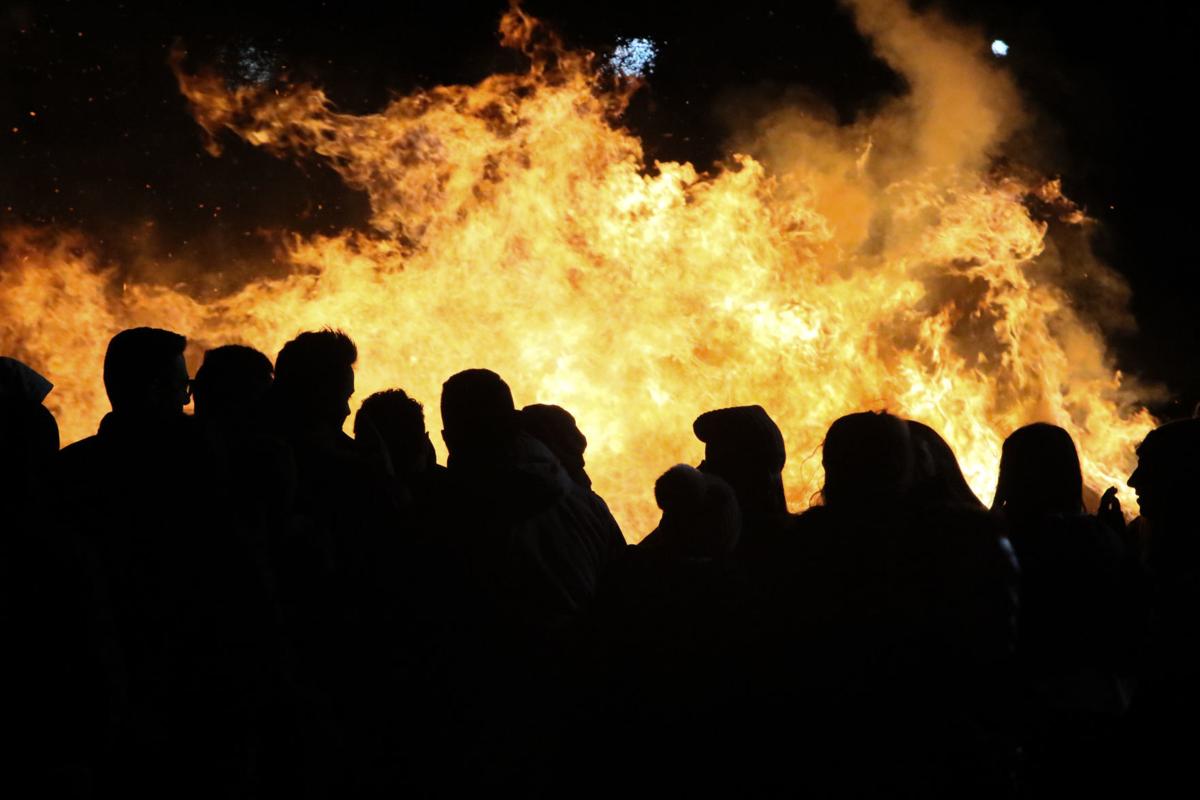 The SS Peter and Paul Macedonian Orthodox Cathedral congregation gathers Jan. 6 outside to view the badnjak, a bonfire of burning Christmas trees. 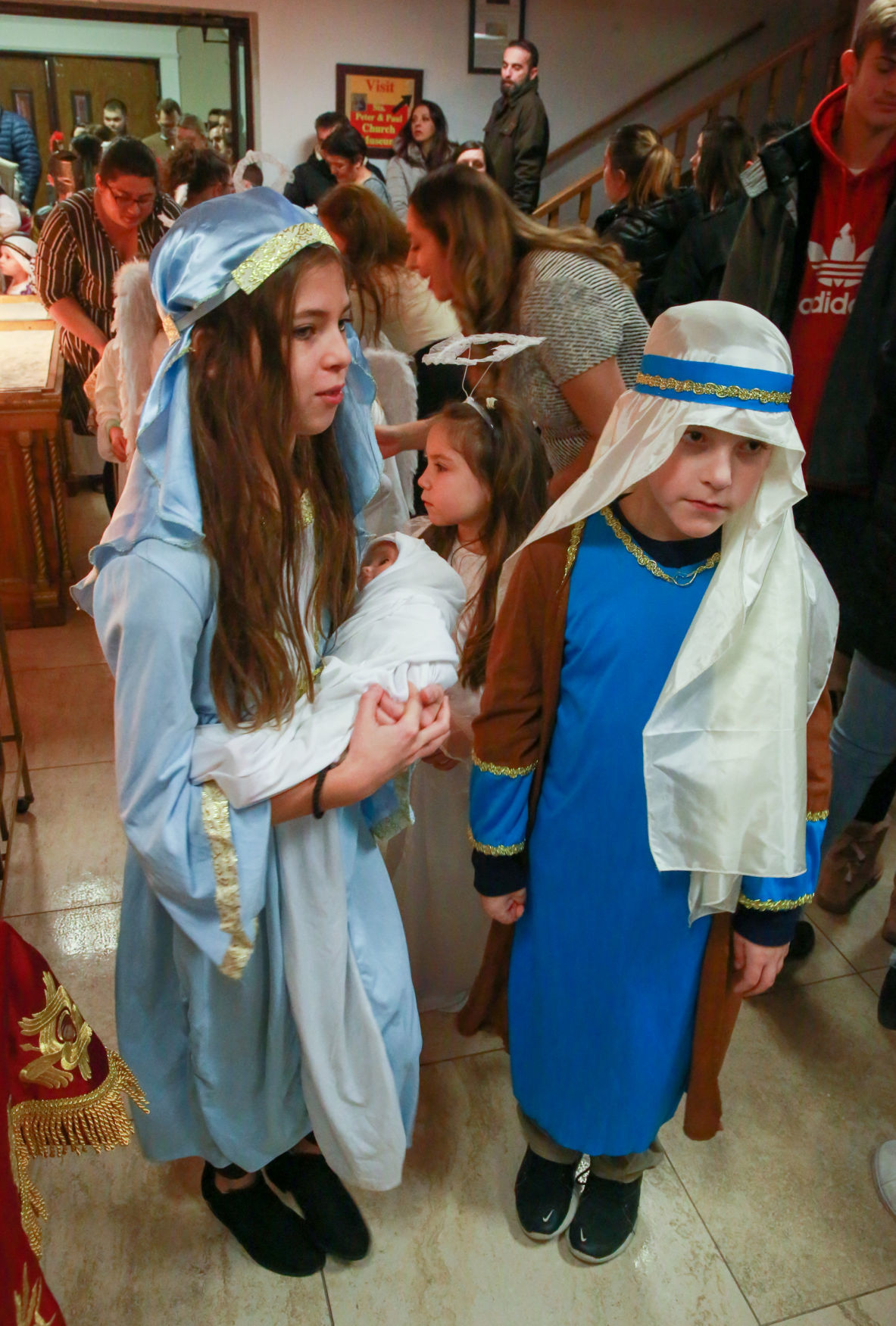 Natalia Aleksovski, 10, and Lucas Jovanoski, 9, as Mary and Joseph prepare to lead the way into the SS Peter and Paul Macedonian Orthodox Cathedral sanctuary Sunday for Christmas services. 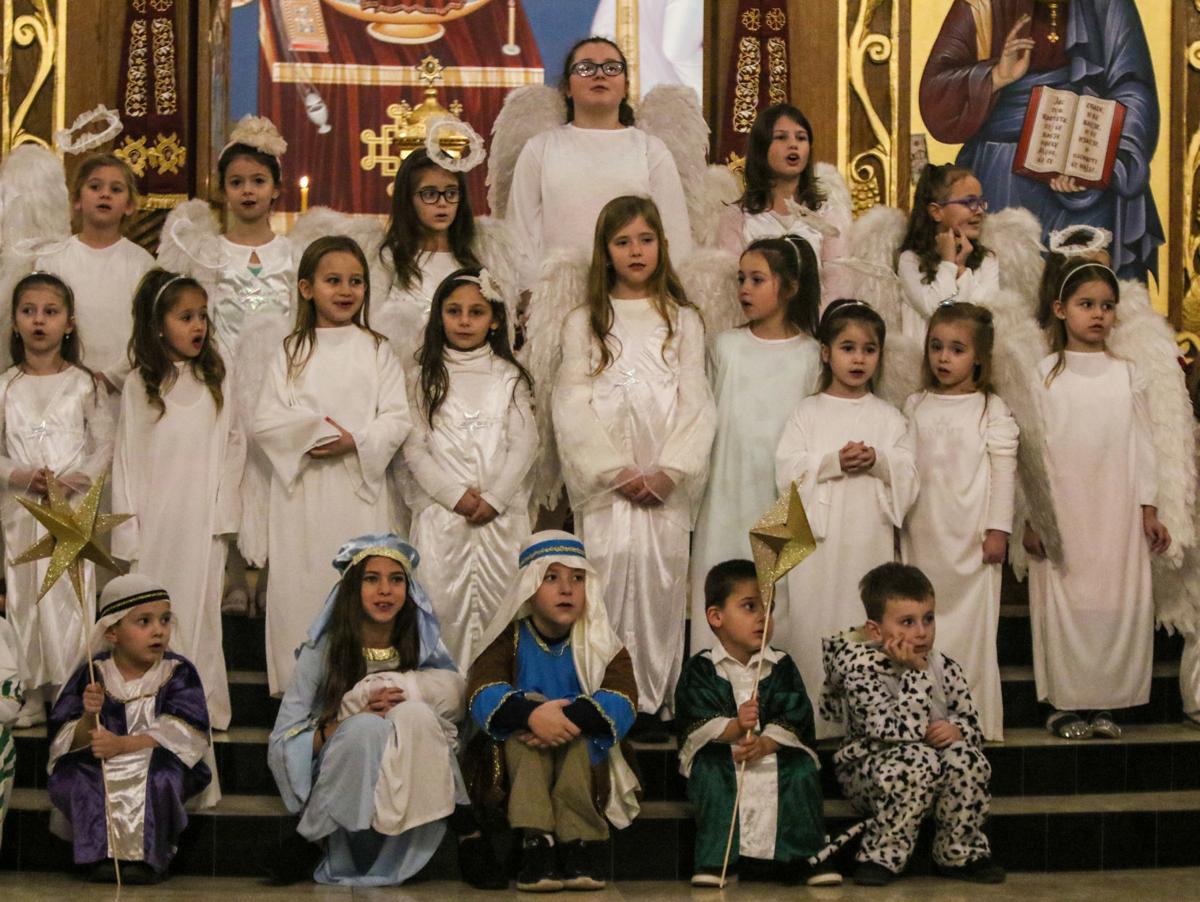 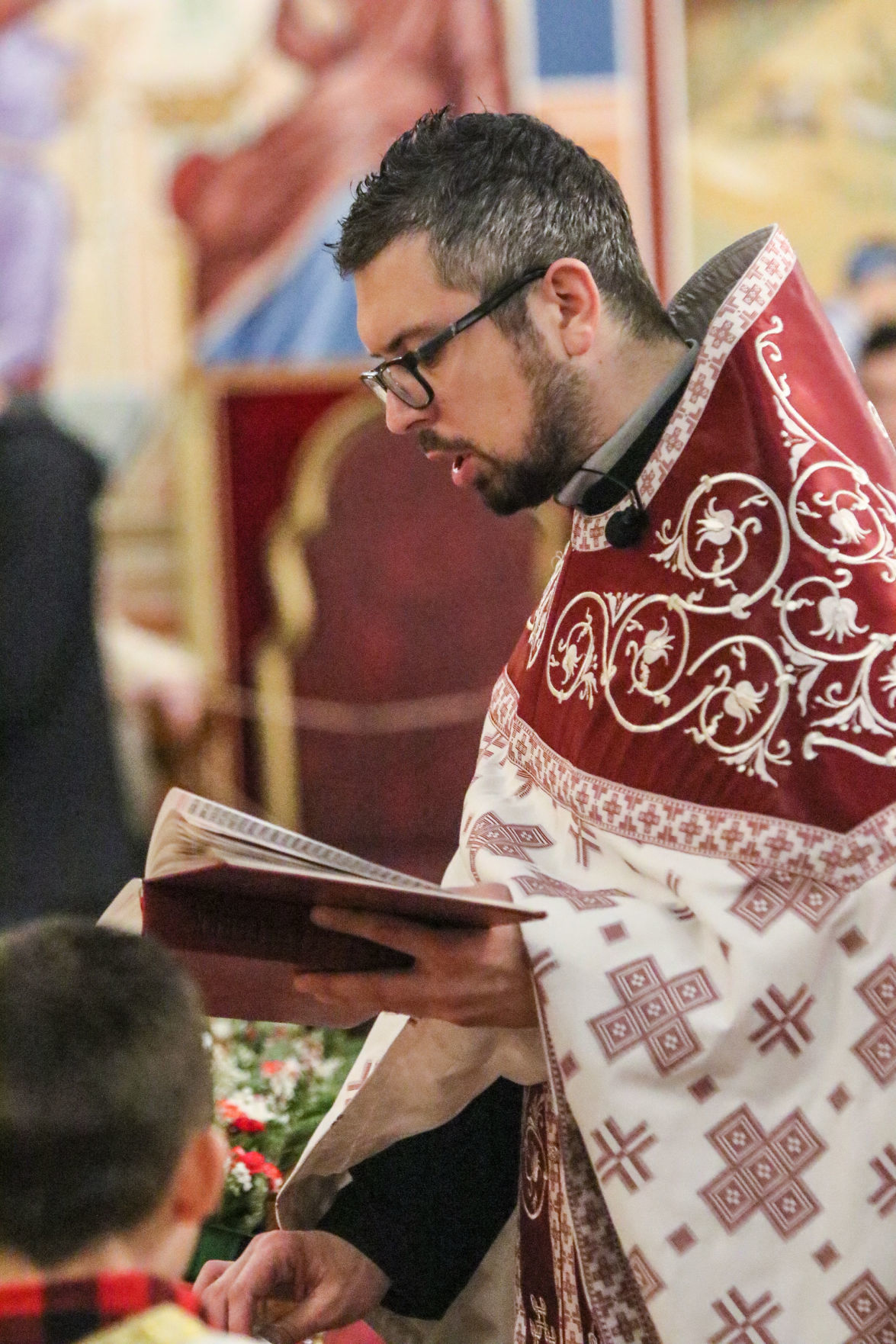 CROWN POINT — Marjan Trajkovski was just a young boy when his family immigrated to the United States from Macedonia in 1970.

Yet Trajkovski has fond memories of those old country Christmas Eve or Kolede traditions he and his family have continued through their Orthodox Christian faith at Saints Peter and Paul Macedonian Orthodox Cathedral.

"The young children would walk house to house and sing carols and each household would give them gifts of candy and nuts," Trajkovski said.

Trajkovski and fellow parishioners on Sunday gathered at Saints Peter and Paul for church services at 6 p.m. followed by a children's play then fellowship in the hall and a yule-log burning outside the hall in preparation for Orthodox Christmas on Tuesday.

Fellowship inside the hall included a visit by Santa, a portrayal Trajkovski has done for the last 15 years.

Similar to the Christmas Eve tradition in the old country, Trajkovski also handed out small bags of candy, nuts and bread to the children of the parish.

"I enjoy doing this. It makes me happy to see the children's faces light up when they see their gifts," Trajkovski said.

The Rev. Georgij Gligorov, parish priest at Saints Peter and Paul, said most Macedonians, as well as Serbians and some other Orthodox Christians, celebrate Christmas on Jan. 7 because they are following the Julian calendar.

That calendar was revised in the 15th or 16th century to the Gregorian calendar, changing the date of Christmas by 13 days.

"We follow the calendar which wasn't revised," Gligorov said.

It was some time in the 20th century that at least some Orthodox Christians, including the Greeks, began following the new calendar which places Christmas on Dec. 25, Gligorov said.

Tanja Talevski, of Winfield, arrived at the church on Sunday night pushing her 3-month-old son, Anthony, in a stroller.

Talevski, who is married and the mother of two other young children including Dominic, 3, and Jana, 5, moved to the United States from Macedonia 17 years ago.

She admits that her children get to experience both Christmases with Dec. 25 more about opening gifts and less about religion.

"I do it for the children; it's more about the fun part of the holiday," Talevski said.

The children's play, including the birth of Christ, was spoken by youngsters in the Macedonian language and two of the three Christmas songs, were sung in Macedonian.

"My daughter, who will be six in March, speaks both languages," Talevski said.

Traditional foods also play a part in the Christmas festivities with a light supper of beans, bread and salad served on Christmas Eve.

"We are still fasting for 40 days," Talevski said.

Following morning church services on Christmas Day, the fast will be broken and the Orthodox Christian faithful will gather with their families to dine on such foods as roast pork, said Thomas Traycoff, of Valparaiso.

Traycoff said that in the Orthodox religion, Christmas and Easter are the most important holidays.

"We're always looking forward to tonight, which builds up to Christmas," Traycoff said.

There's only been one time in the nearly 60-year history of Saints Peter and Paul that parishioners weren't able to hold Christmas services, and that was about seven years ago when the weather was so bad a declared emergency made roads impassable, Traycoff said.

Nick Nochevich, of Crown Point, a first generation American whose parents and grandparents were from Macedonia, called Orthodox Christmas a "special time" in regard to religious services and the gathering of family.

Gusty winds, sleet and rain in the forecast; Region under flood watch

Strong, gusty winds, coupled with the chance for sleet and rain on Friday and Saturday, is in the forecast for the Region this week.

The SS Peter and Paul Macedonian Orthodox Cathedral congregation gathers Jan. 6 outside to view the badnjak, a bonfire of burning Christmas trees.

Natalia Aleksovski, 10, and Lucas Jovanoski, 9, as Mary and Joseph prepare to lead the way into the SS Peter and Paul Macedonian Orthodox Cathedral sanctuary Sunday for Christmas services.