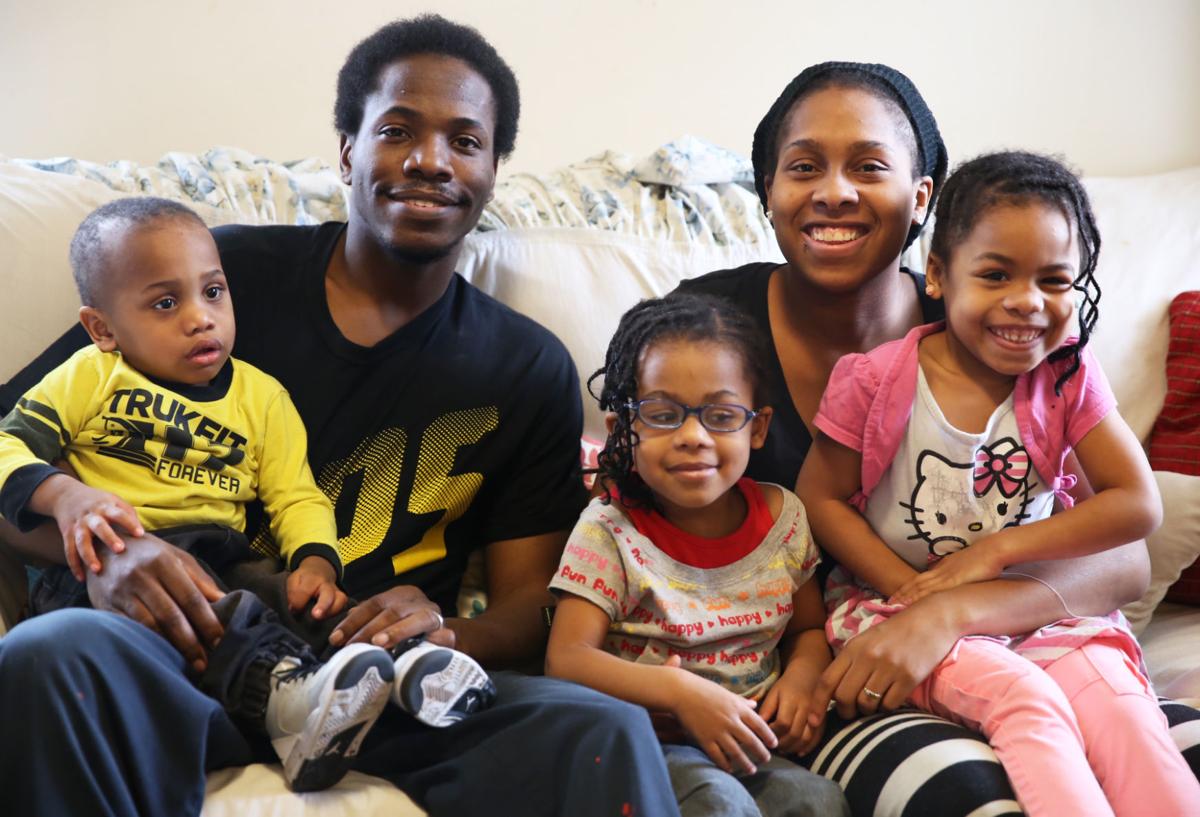 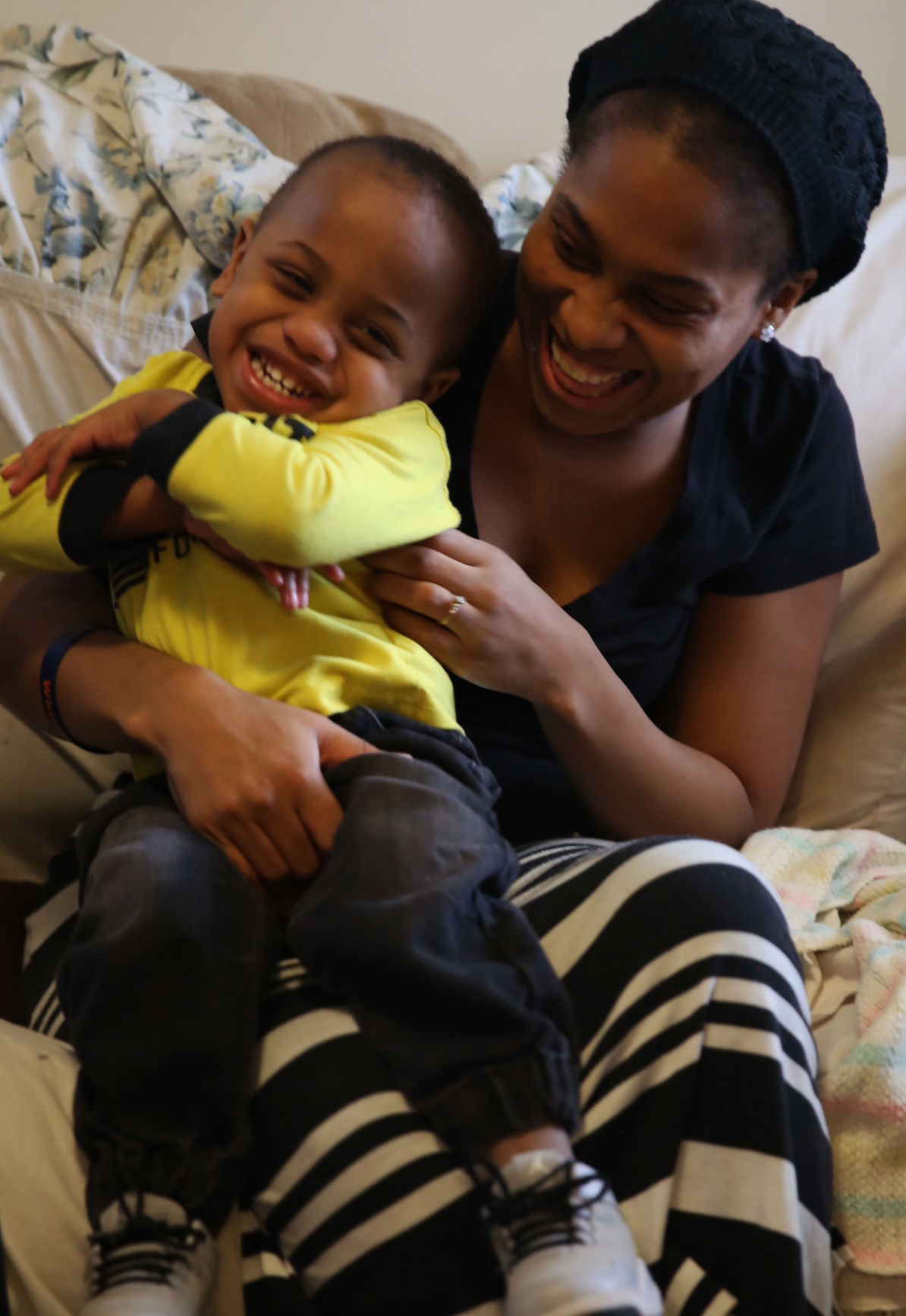 Ebony and Robert are all smiles as they play Thursday evening. 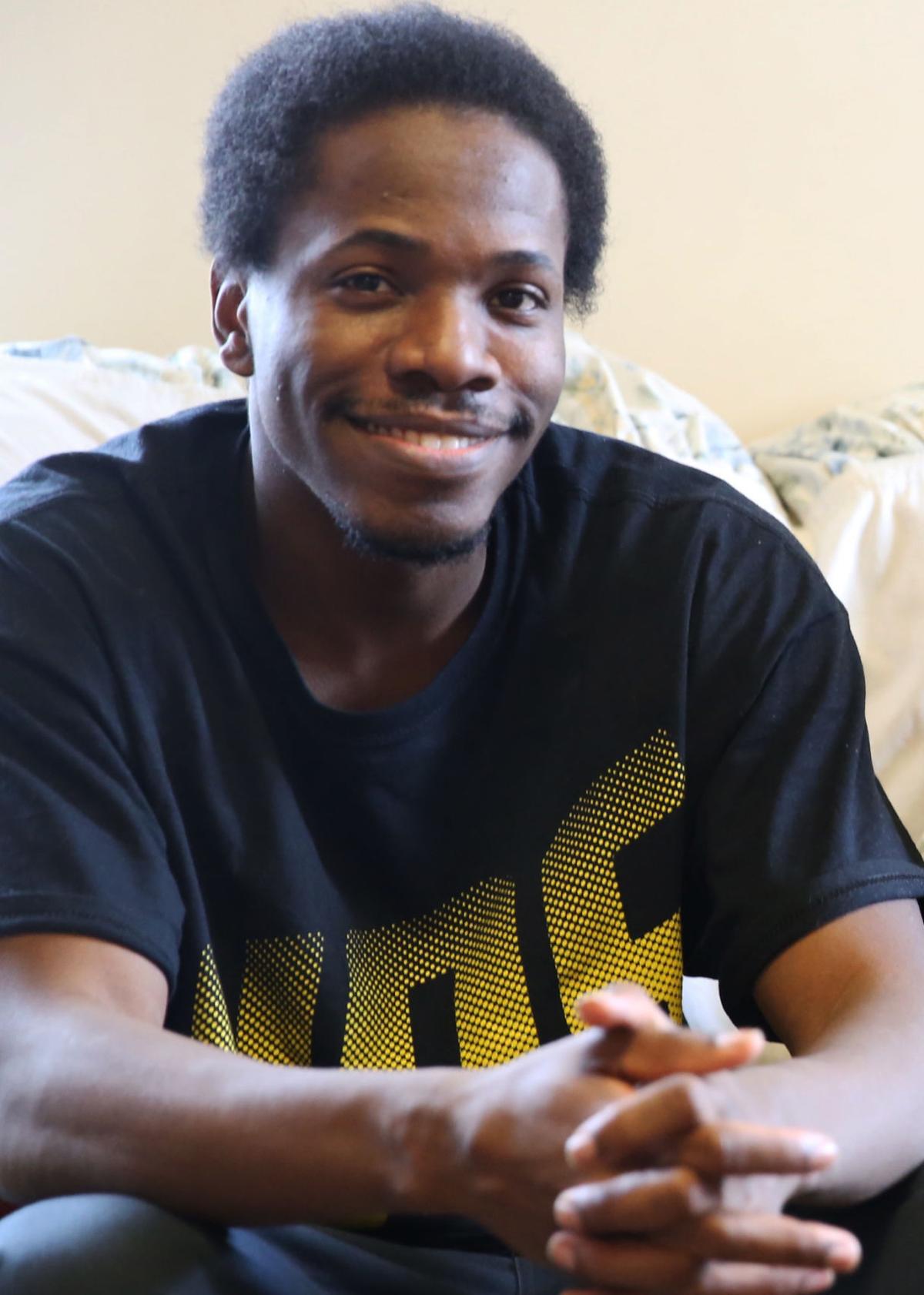 Robert Edmond, completely deaf since birth, is doing his best to keep his family together working part-time at UPS. 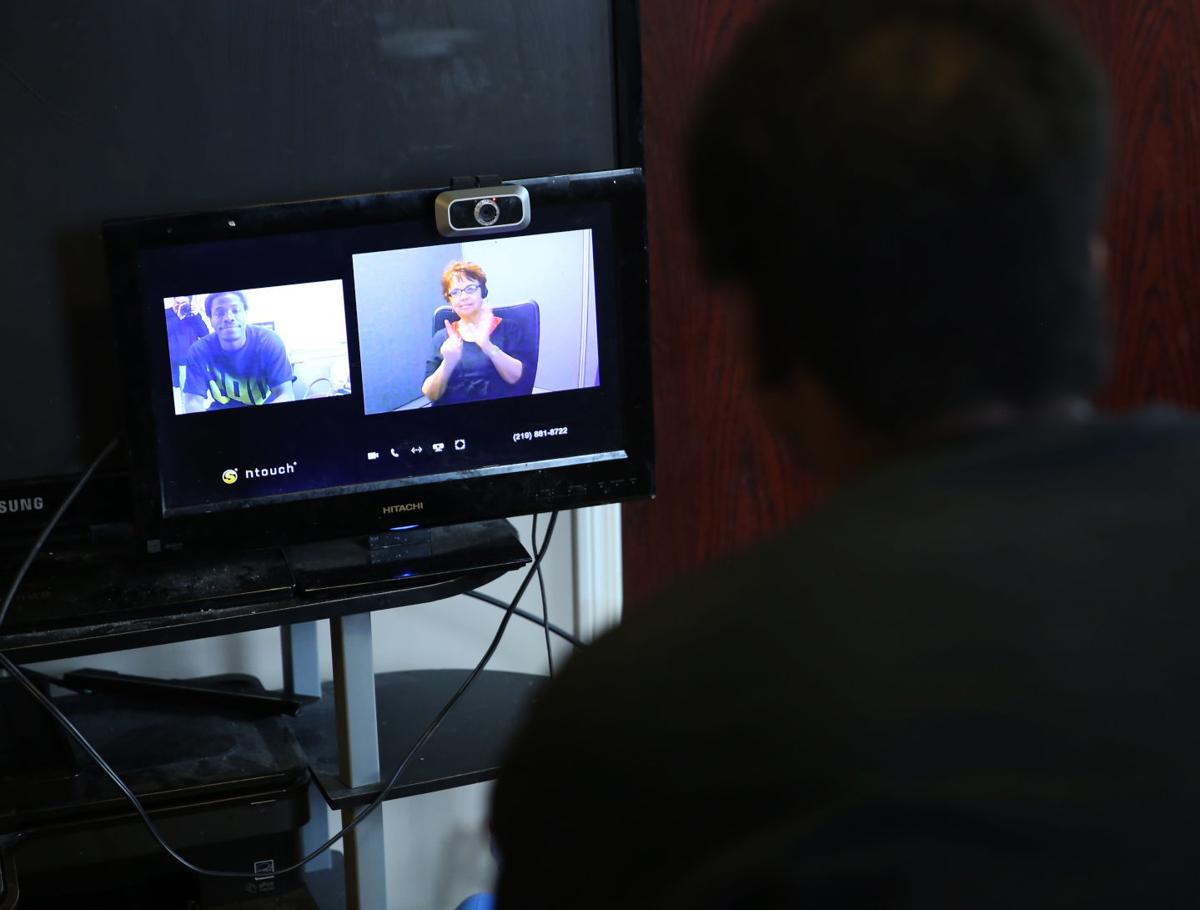 Robert Edmond talks with his mother over videophone with the aid of an interpreter. 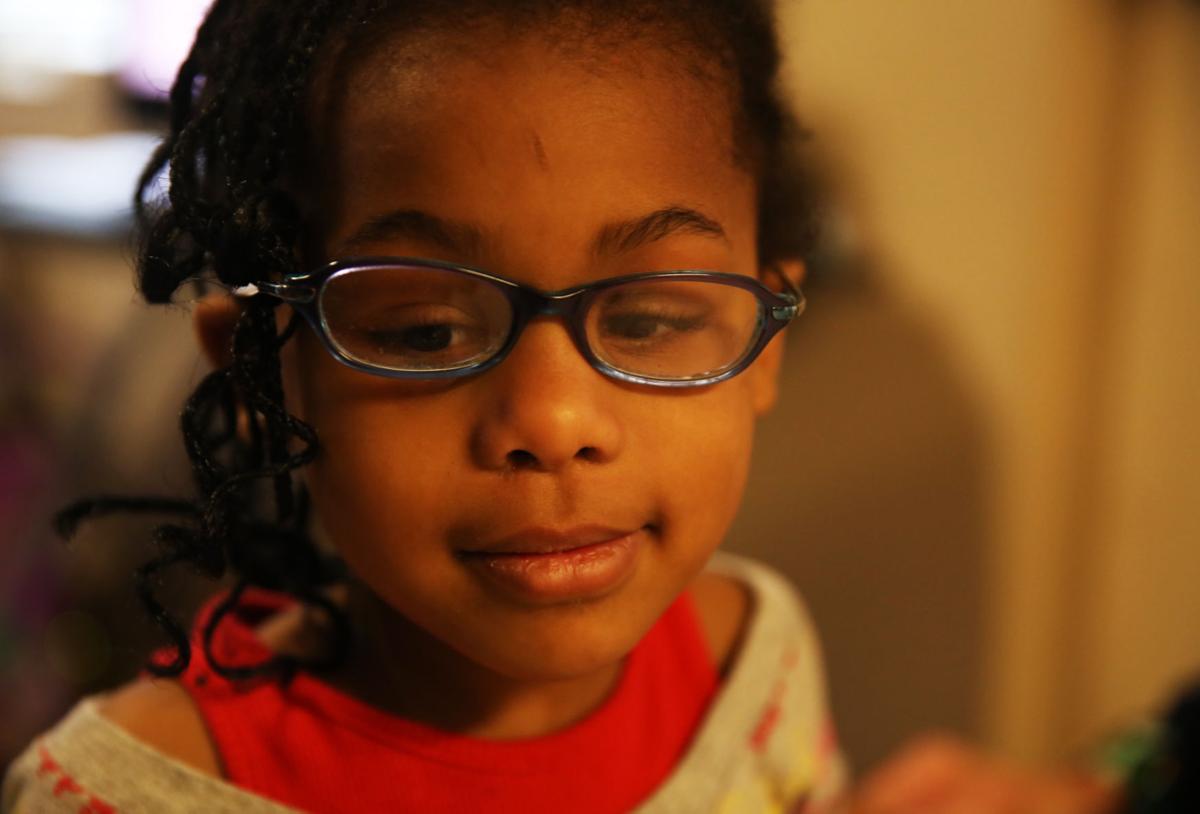 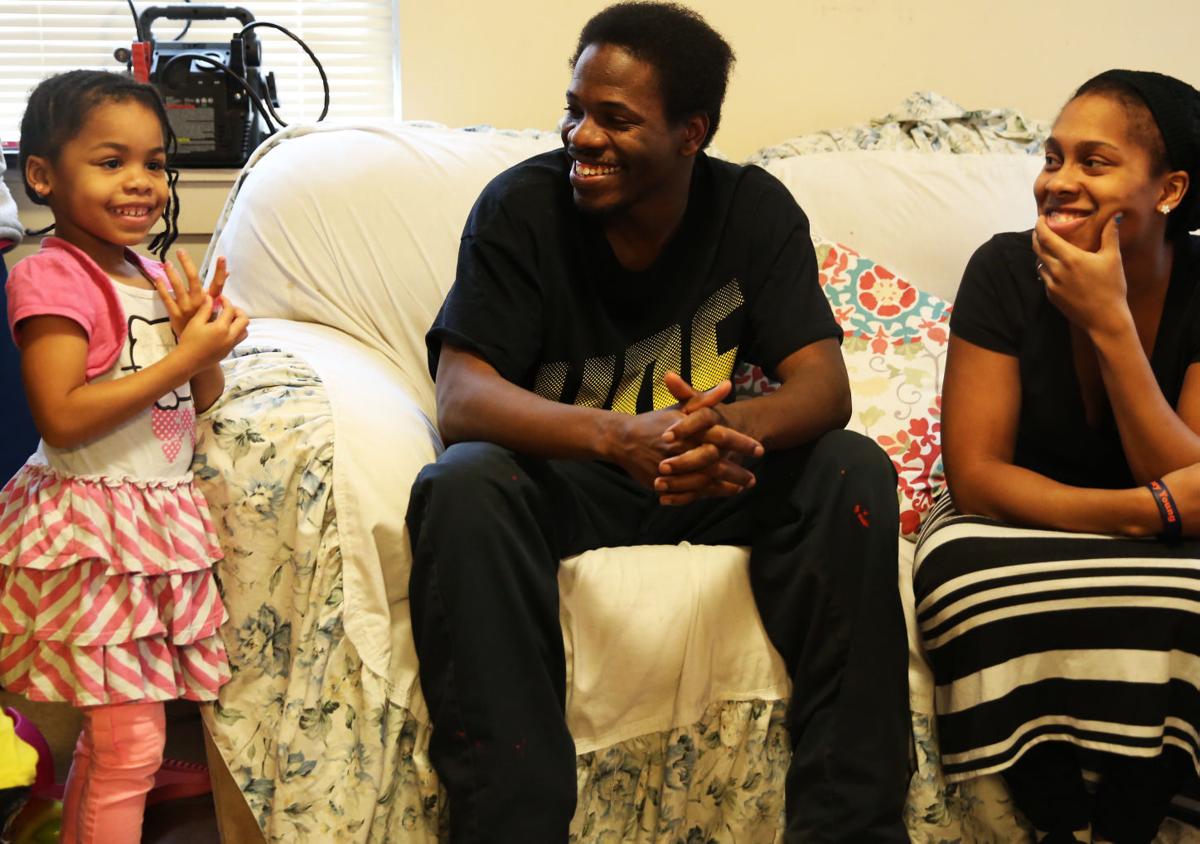 Editors' note: This is the fourth and final story in a series profiling the working poor in Northwest Indiana.

HAMMOND — It's not easy to see the pain and uncertainty behind the ear-to-ear smiles of Robert and Ebony Edmond.

The couple, in their late 20s, were born deaf.

They are doing their best to raise their three children, 5-year-old Dasia, 4-year-old Jayanna and 18-month-old Robert, in a loving and stable family.

But it's a task that gets more challenging each day.

The family, which lives in a modest housing complex in Hammond, are an example of Lake Area United Way's Edge of Survival campaign to assist families struggling to afford basic everyday needs.

Robert Edmond has been working part-time at UPS in Hodgkins, Illinois, for almost two years as a material handler. He beams when he talks about his work, from handling large packages to the small, very detailed ones. And while his employer has offered him a full-time position, he can't take it because it would mean losing his disability benefits.

Communicating by sign language through an interpreter, Robert Edmond's smile fades when he talks about his family's struggles.

"We want to show our kids that we are hard workers and good parents that want the best for our kids like everyone else," Robert signed. "It's hard enough for people that are down on their luck, but factor in that we are disabled, there aren't many opportunities for us to get ahead."

His wife, Ebony, has been seeking employment for years to no avail.

"It's hurtful when people won't even give you a chance because they are so worried about the communication factor," Ebony Edmond signed. "They don't even give us a chance, and it's very painful because we want to contribute."

Ebony Edmond would love nothing more than to find employment, but the child-care cost remains an issue for them. Her family is in Park Forest; Robert's is in Gary and they are without transportation.

"It's so frustrating because food stamps aren't enough," Robert Edmond signed. "Clothes are so expensive and food (costs) for our entire family will keep rising as our children get older."

Robert Edmond remains hopeful. He was able to set up an interview for his wife. But landing a job will come at a cost.

"She's had a hard time getting a job in Lake County, so I was forced to take things into my own hands," Robert Edmond signed. "It's going to be a challenge as I would have to work the first shift and Ebony will have to work the fourth shift so that we could share the responsibilities of caring for our children. That is very important for us."

Communication between husband and wife is natural, and at times surprising, like when Robert left the room to look for a remote. When Ebony found it first, she flickered the lights indicating for him to return to the living room.

The two girls, Dasia and Jayanna, attend Jefferson Elementary. The Edmonds are grateful for school uniforms, cutting down on clothing costs.

Her parents said Dasia is an independent thinker and gets her schoolwork done with minimal help.

There are concerns about the educational development with the three children. As they get older and the work more challenging, Robert and Ebony Edmond find it harder to help. Their youngest, Robert, attends speech and physical therapy twice a week through a program offered by Tradewinds. His parents said he would benefit from full-time services, but financial and transportation issues make it impossible.

"Our biggest challenge is simply survival," Robert Edmond signed. "Now with the kids growing, they have more needs. We want to remain independent, but it's so hard to get ahead."

The Edmonds can write and communicate effectively, but "it's getting the chance that's so difficult." They are continually asked so many questions about their challenges. Many "are not appropriate and often embarrassing."

"The unemployment rate is so high for those with disabilities," Ebony Edmond signed. "We just want to be treated normally. We are able."

The family is thankful for Deaf Services and resources such as Tradewinds and the United Way that have helped them with services. Robert and Ebony Edmond communicate to others through a videophone with the help from an interpreter on the other end.

The Edmonds do all they can with their children, including family visits and trips to the park. Robert Edmond said that money is always an issue, but they try and take advantage of free or nominal-fee activities.

"Robert and Ebony are excellent parents that are very inspiring," said Debbie Pampalone, Deaf Services Inc. director. "They are very hardworking and show great commitment to their family. It's very tough for people with disabilities to get opportunities and even though we have come a long way, we still have so far to go yet."

The Algerian making his own instruments

World's largest cruise ship to hit the seas in 2022

World's largest cruise ship to hit the seas in 2022

Ever wonder how sinkholes are formed?

Ever wonder how sinkholes are formed?

WASHINGTON — The U.S. economy added 151,000 jobs in January, a slowdown from recent months but still a sign of a solid job market. Employers r…

Huddled under a Lakeshore Drive bridge on Chicago's north side, Joseph and Maria Murray awoke to 18-degree temperatures and the familiar hollo…

LINCOLN, Neb. — Nebraska is desperate to stop the runaway growth of its prison population, but doing so depends a lot on people like Ronald Ti…

SLIDESHOW: Profiles of the working poor in Northwest Indiana

Federal poverty threshold guidelines say that a single person who makes $11,670 or less annually and a family of four who makes $23,850 or les…

This interactive infographic provides a deeper look at poverty in Northwest Indiana and beyond.

Ebony and Robert are all smiles as they play Thursday evening.

Robert Edmond, completely deaf since birth, is doing his best to keep his family together working part-time at UPS.

Robert Edmond talks with his mother over videophone with the aid of an interpreter.