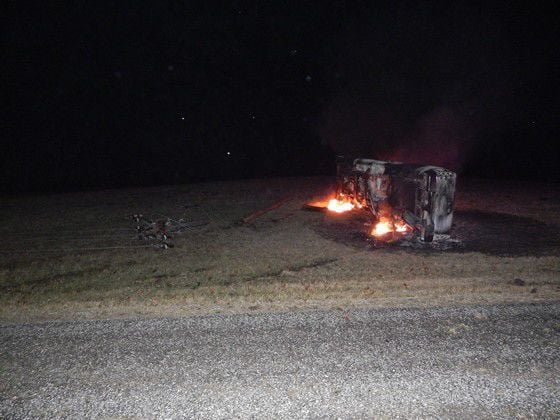 The scene of a drunken driving crash that killed a passenger on Jan. 12.

Andrew Kepchar, 29, faces charges of causing a death when operating a motor vehicle while intoxicated, a level 4 felony, and reckless driving at an unreasonable speed, a misdemeanor, according to Newton County court documents.

Thomas Richardson, 30, of Morocco, was identified as the vehicle passenger who died as a result of the crash, police said.

State trooper Brian Runyon responded about 9 p.m. Jan. 12 to a single-vehicle crash along County Road 400 West near Morocco, according to Indiana State Police.

A preliminary investigation found Kepchar's Silverado left the roadway and struck a utility pole, rolled onto its passenger side and caught fire, police said.

When Runyon arrived, the power lines were knocked down at the scene, hindering first responders' ability to access the vehicle.

While waiting on the utility company to arrive, Kepchar allegedly came up to Runyon and said it was his truck on fire.

"He stated that he was a passenger in his truck because he had been drinking and didn't want to drive. He stated that his friend ... was driving," Runyon wrote in charging documents.

Kepchar claimed he attempted to get Richardson out of the vehicle, but ran away once he noticed the truck had caught fire, records state. While on scene, Kepchar was taken to an ambulance to get checked out.

It took Runyon no time at all to piece together the alleged lies in Kepchar's story once he noticed markings on the left side of Kepchar's neck from a seatbelt, indicating he was the driver, and not a passenger, police said.

"I went into the ambulance a short time later and saw a mark on the left side of Kepchar's neck. I asked him to remove his shirt to which he did. I then asked him how he got the marks on the left side of his neck and chest. He stated that it was from the seatbelt. I then asked why the seatbelt marks were on his left side if (he) was the passenger. Marks from the passenger seat would be on the right side. Kepchar then stated that he was driving," Runyon wrote.

Kepchar refused transport to the hospital and a field sobriety test, saying he was "told not to do so."

Runyon then informed him Indiana's implied consent law, which requires that persons arrested on suspicion of drunken driving are giving "implied consent" to a chemical test, records state.

Kepchar was taken to Franciscan Hospital of Rensselaer, where he consented to a certified blood test for alcohol consumption, police said.

The results of that blood draw are pending.

Kepchar was then arrested and transported to the Newton County Jail.

The crash remains under investigation by the Indiana State Police's Crash Reconstruction Team.

He has been tentatively charged with operating while intoxicated causing death, a level 5 felony, according to police.

Her boyfriend is accused of telling her to stop counting how many lashings the girl received and to "hit her till she gets it."

She was fired from the job after the owners found funds were missing from about 75 accounts, court records state.

Man reports he was bound and beaten at friend's house, police say

The victim said he managed to escape but the men caught him running away outside and attacked him again, police said.

Special prosecutor to handle case of crash that killed cop

A special prosecutor will handle the case of a suburban Chicago police officer who was involved in a traffic crash in which another police officer riding with her was killed.

The passenger rail agency had told Chicago-based Access Living its policy was to charge extra to reconfigure train cars to accommodate wheelchair users.

The scene of a drunken driving crash that killed a passenger on Jan. 12.