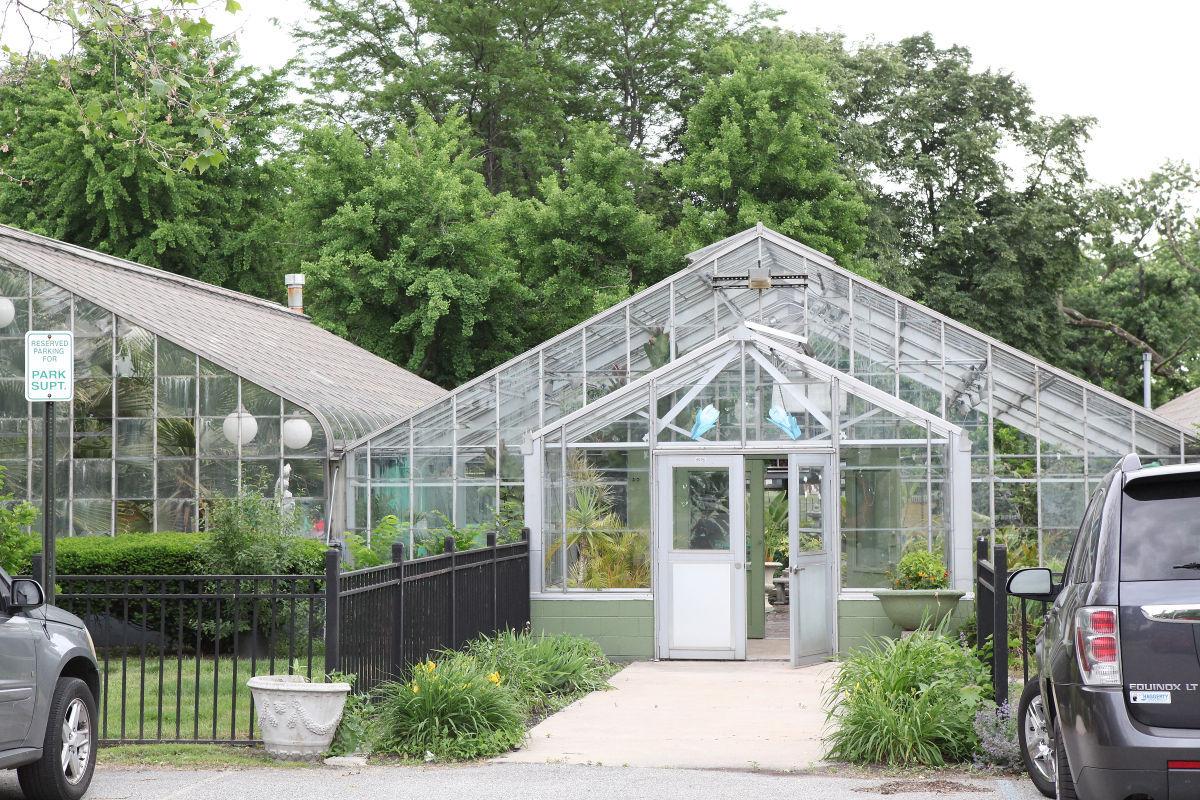 East Chicago has collaborated with Ball State University’s sustainable farming project to create an aquaponics garden in the historical greenhouse at Washington Park. 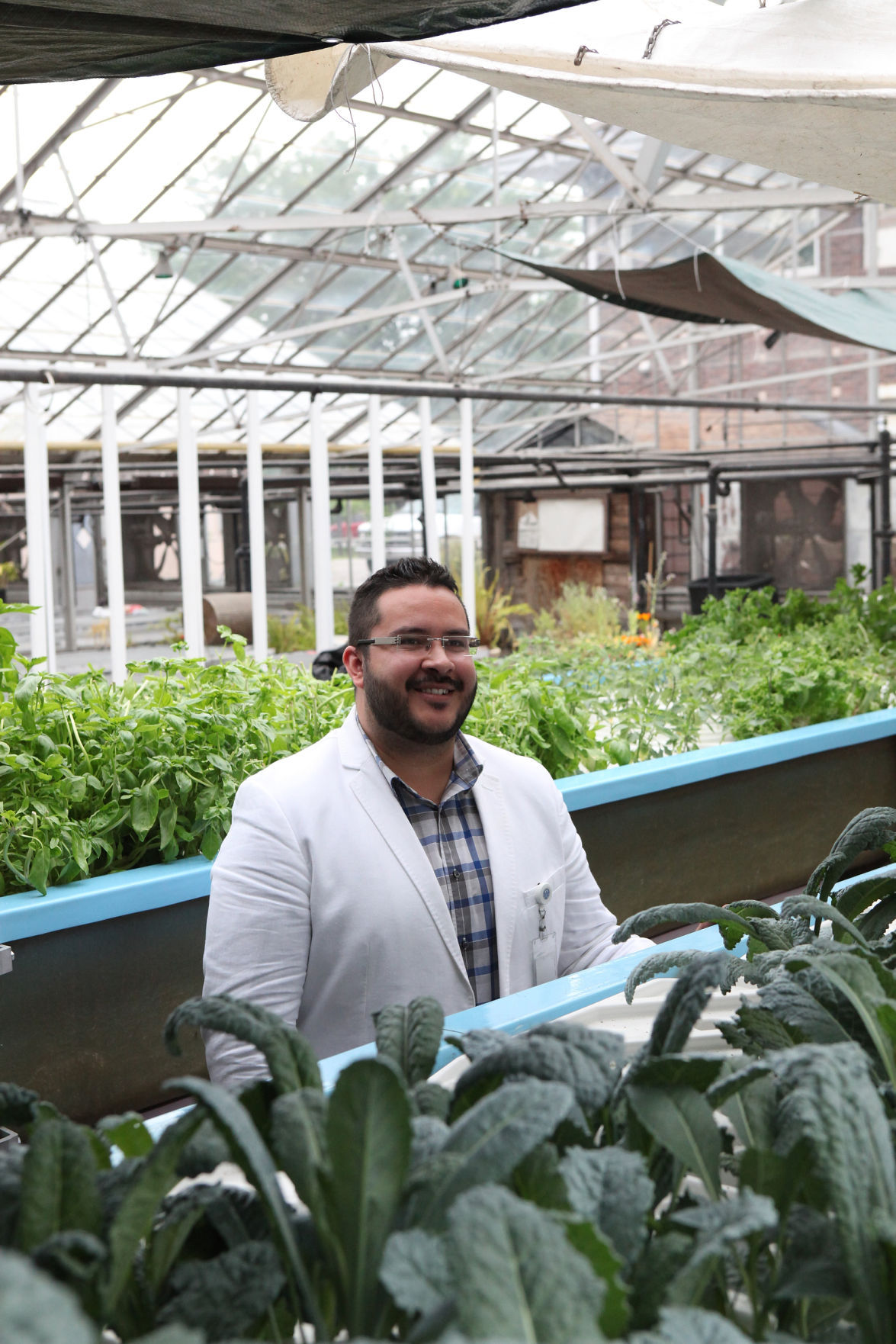 While others see a food desert in East Chicago, Marino Solorio sees an oasis ready to grow. 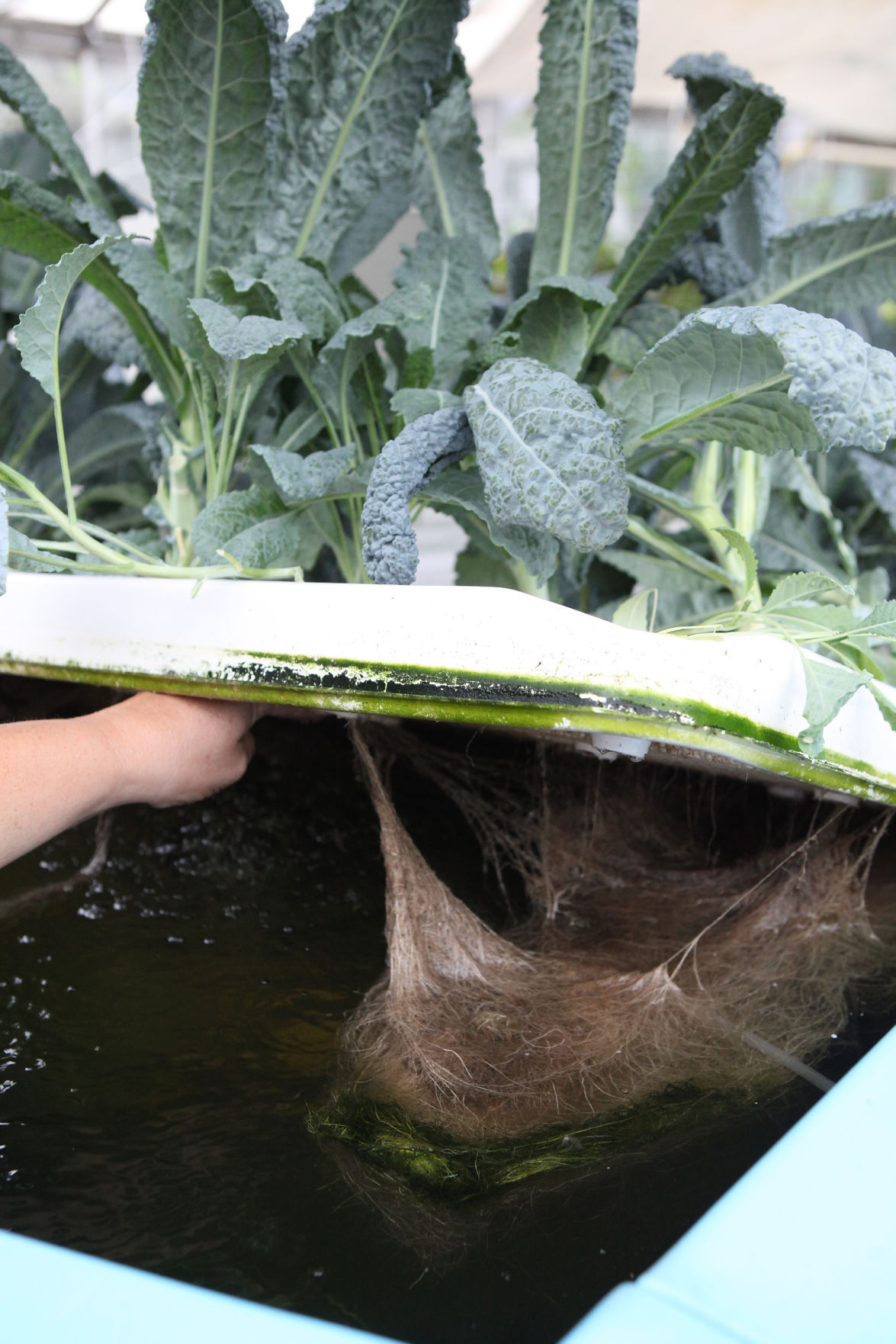 In an aquaponics system, powered by fish, roots grow in the water base faster and stronger than in normal soil.

Marino Solorio is a visionary. While others see a food desert in East Chicago, he sees an oasis ready to grow.

The city planner has collaborated with Ball State University’s sustainable farming project to create an aquaponics garden in the historical greenhouse at Washington Park.

“Our goal is to create a commercial urban garden that will provide affordable fruits and vegetables to our residents,” Solorio says. “Eventually, we can grow enough to sell our organic products to local grocers and restaurants.”

“We began research on ECSIA in 2007,” Barber says. “I learned how using fish waste as a fertilizer would make plants grow at an incredible speed. Plants would reach their peak faster, and crops would be more abundant.”

ECSIA consists of two water tanks, one for the fish and the other for the waste they create. The waste in the water is broken down with organic enzymes and then used as soil for the plants. The roots grow in the water base faster and stronger than in normal soil.

Solorio, a BSU graduate, was back on campus on an unrelated project when his professors introduced him to aquaponics and Barber. The university’s sustainable farming project focuses on urban agriculture, the practice of cultivating, processing and distributing food in or around an impoverished city.

“I immediately saw the opportunity for East Chicago,” Solorio says. “I couldn’t wait to get back home and talk to the mayor (Anthony Copeland).”

Copeland, another visionary, committed $100,000 to get the project off the ground. Solorio renovated the greenhouse that was erected in the 1930s. He then worked with Barber to initialize a pilot project using a Family Farmer Market Module.

“We wanted to make sure we installed the correct size for our pilot project,” Solorio says. “We didn’t want to grow and harvest more than we could handle.”

Once the module was installed and the water properly treated, the Parks and Recreation Department came on board for the day-to-day operation.

Fran Nowacki, the Parks recreation director, became the project manager for the greenhouse garden. Nowacki and her team handle the maintenance and harvesting.

“We average 20 to 30 hours of maintenance per week,” she says. “We feed the fish, test the pH level on the water, and keep the modules clean. That includes trimming and harvesting the plants.”

The garden began with lettuce, basil and kale. It has expanded to include two different kinds of chard, two additional types of lettuce, and trial amounts of tomatoes, peppers and cucumbers.

“Everything we plant grows very well,” Nowacki says. “And it’s all natural. No pesticides, no artificial fertilizers. It’s really an amazing system.”

“Many East Chicago residents do not have access to healthy fruits and vegetables,” Solorio says. “For some, it’s a matter of economics. For others, it’s logistics. Grocers do not typically open stores in low-income areas. That’s why they call it a food desert.”

Nowacki and her team have harvested three crops in less than five months. The vegetables have been donated to the local Salvation Army. They, in turn, use the produce in their food pantry and soup kitchen.

“This is just the beginning,” Solorio says. “We have serious expansion plans.”

In November, the city will apply for a $400,000 grant from the USDA. They will use the success of the pilot project as proof of the sustainable garden model. With a $400,000 match from the mayor, Solorio plans to install a much larger Farmer Commercial Module from ECSIA.

“The mayor envisions a farmers market operated by the city’s senior citizens,” Solorio says. “And he wants to incorporate a mentoring program where our senior citizens share their experience and knowledge with our youth.”

For decades, East Chicago has been known as an industrial giant. Now, they are on the leading edge of a revolutionary technology that can fulfill the need for fresh, organic, healthy produce in the city year round. The greenhouse will allow for growing fresh vine-ripened tomatoes in the dead of winter.

“Everyone in the city has jumped on board with enthusiasm and passion,” Solorio says. “East Chicago dares to dream big. And so far, our dream is blooming into reality.”

Just in time for the weather heating up, the city of East Chicago has opened a new spot for families to cool off. The city officially opened a…

Amp up your appetite and get ready to give your taste buds a major workout. On Friday, Aug. 19, through Sunday, Aug. 21, the Taste of East Chi…

Marina downsizes as part of renovation

EAST CHICAGO — On a warm September morning, Sandy Ruhlander walks with her two dogs along the docks of the East Chicago Marina as another boat…

EAST CHICAGO — A Hoosier-made aquaponics system for growing organic fruits and vegetables with zero waste will be used to feed the hungry.

Greenhouse Fellowship, an organization of young people in East Chicago, is working to utilize the city’s strengths and assets through projects…

East Chicago has collaborated with Ball State University’s sustainable farming project to create an aquaponics garden in the historical greenhouse at Washington Park.

While others see a food desert in East Chicago, Marino Solorio sees an oasis ready to grow.

In an aquaponics system, powered by fish, roots grow in the water base faster and stronger than in normal soil.