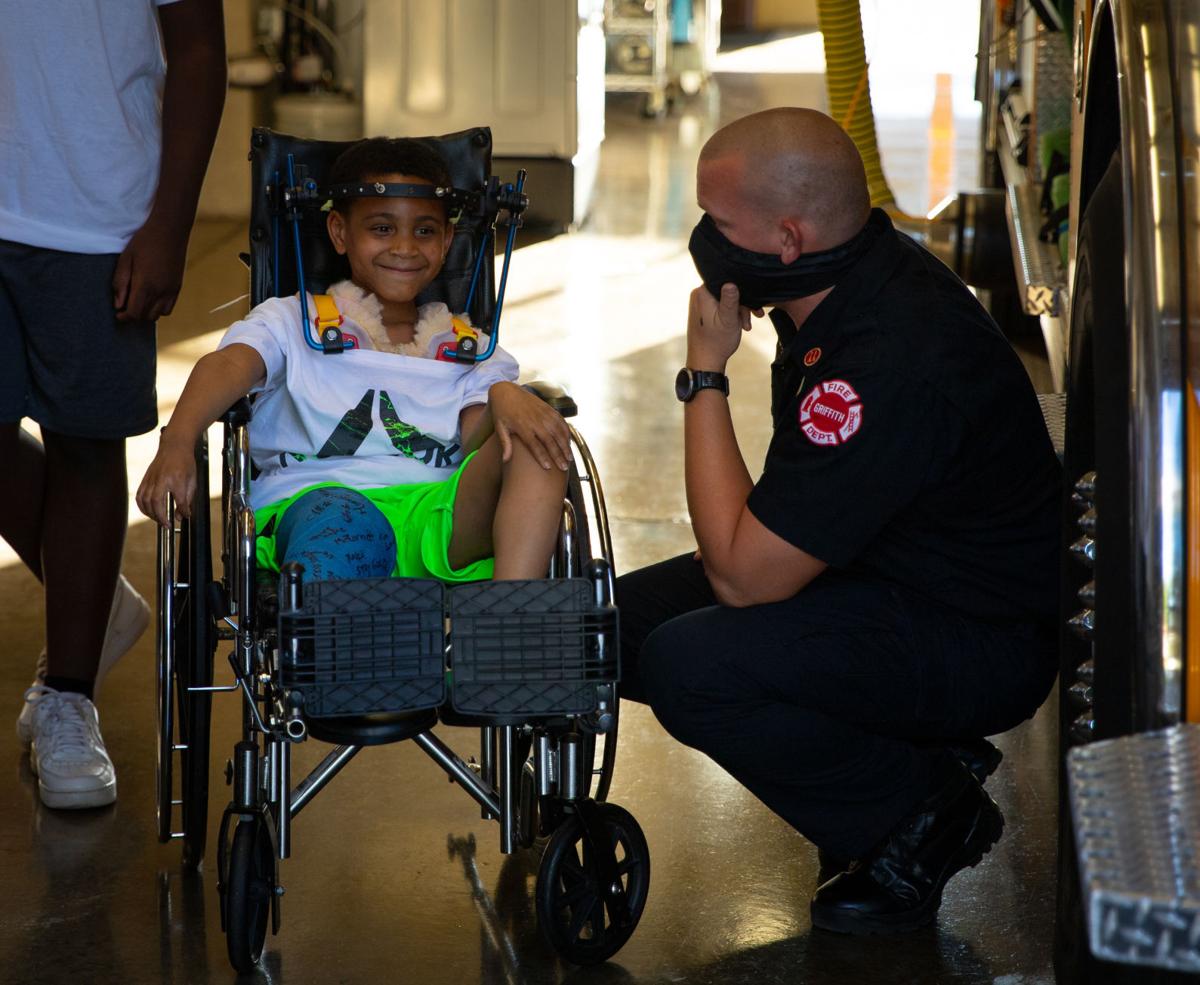 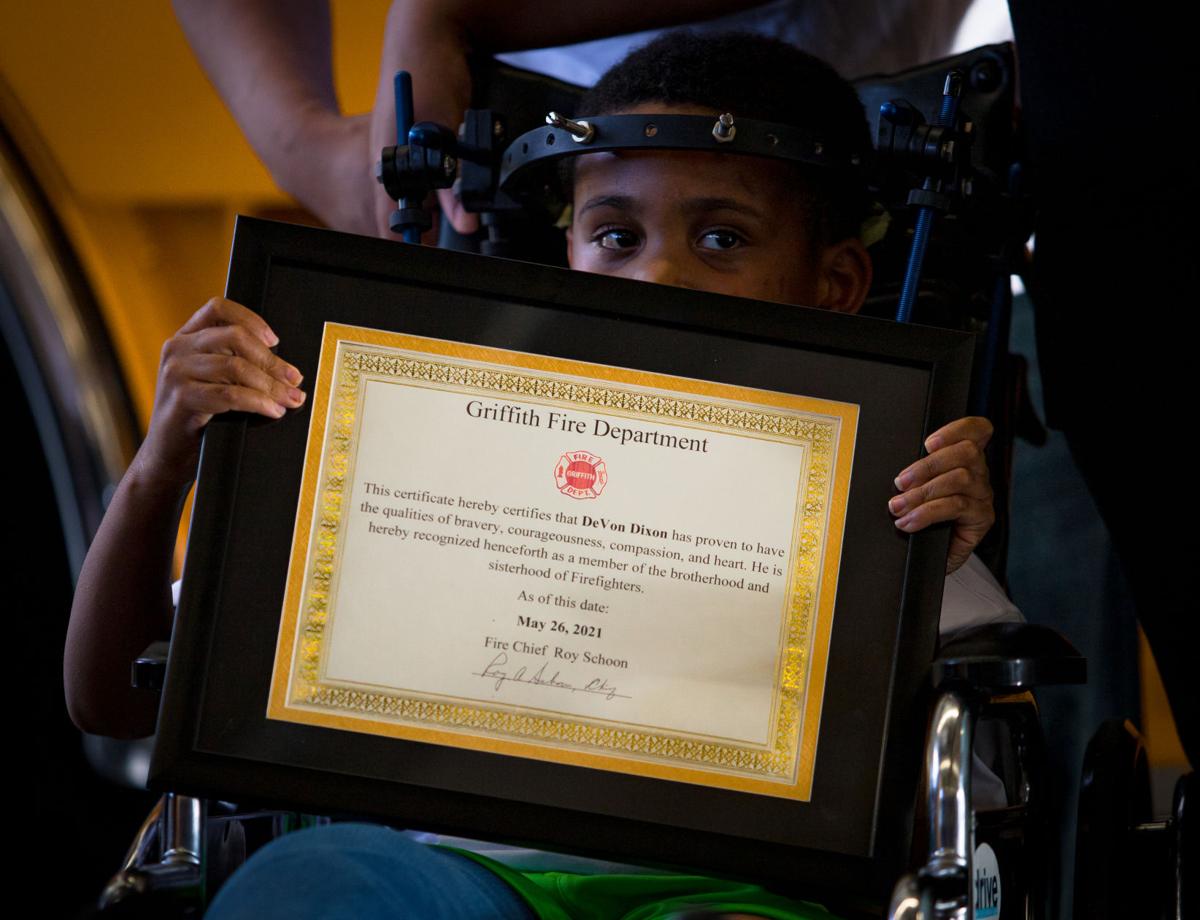 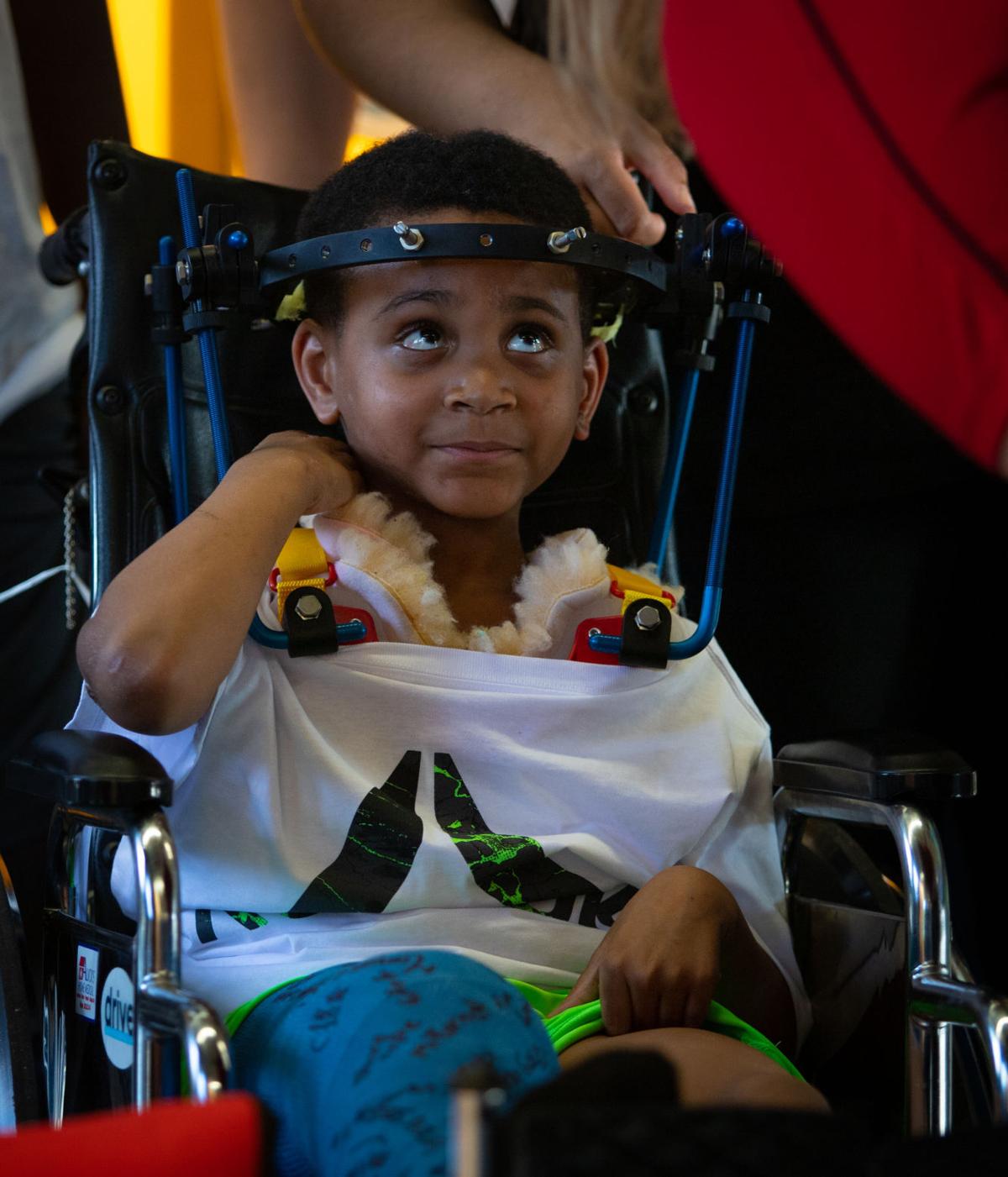 Honorary Griffith Firefighter DeVon Dixon receives praise from a first responder after displaying acts of courage and bravery by saving his sister's life. 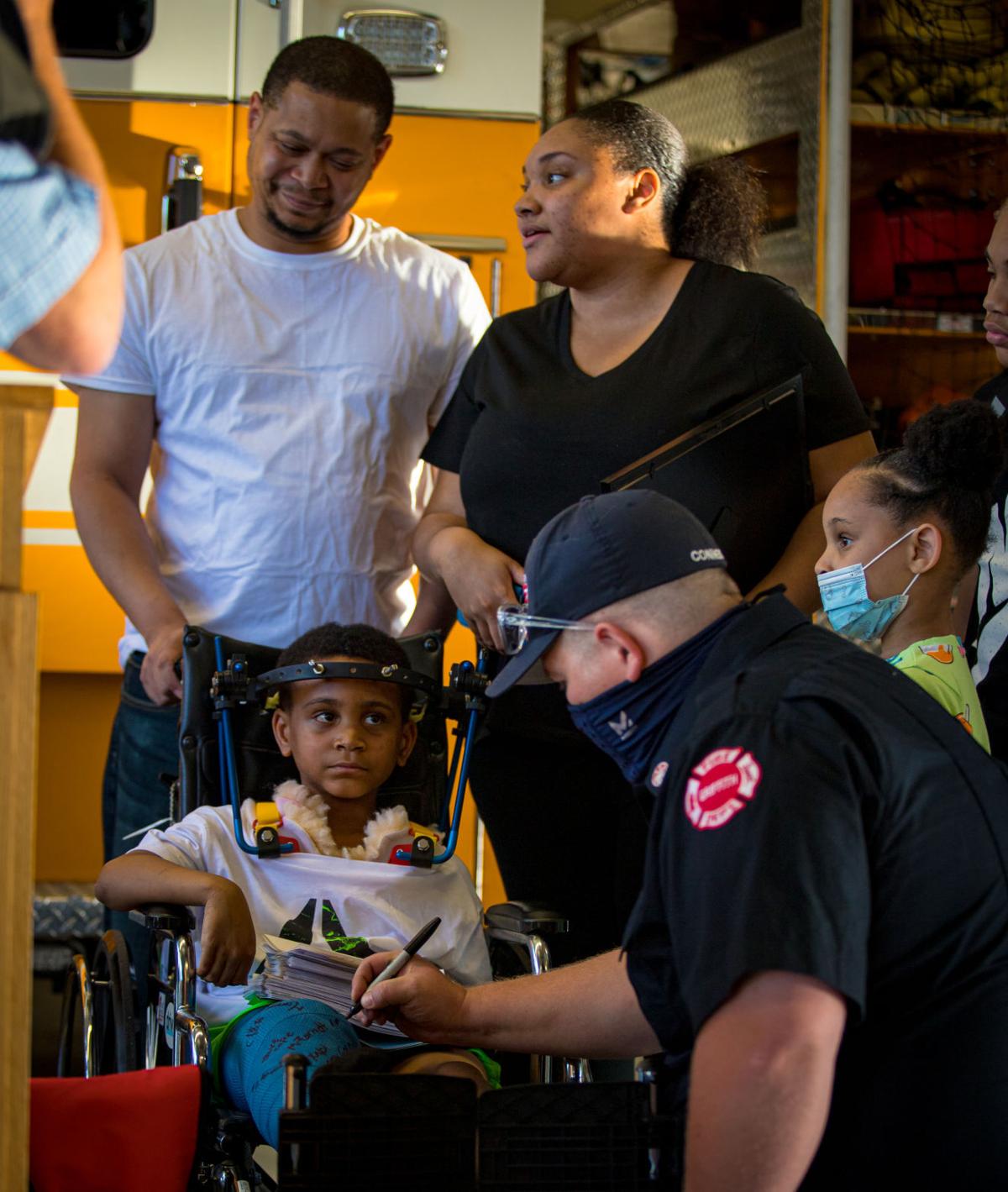 Joined by family, DeVon Dixon, bottom left, watches as members of Griffith Fire Department line up to sign his cast on Wednesday evening. 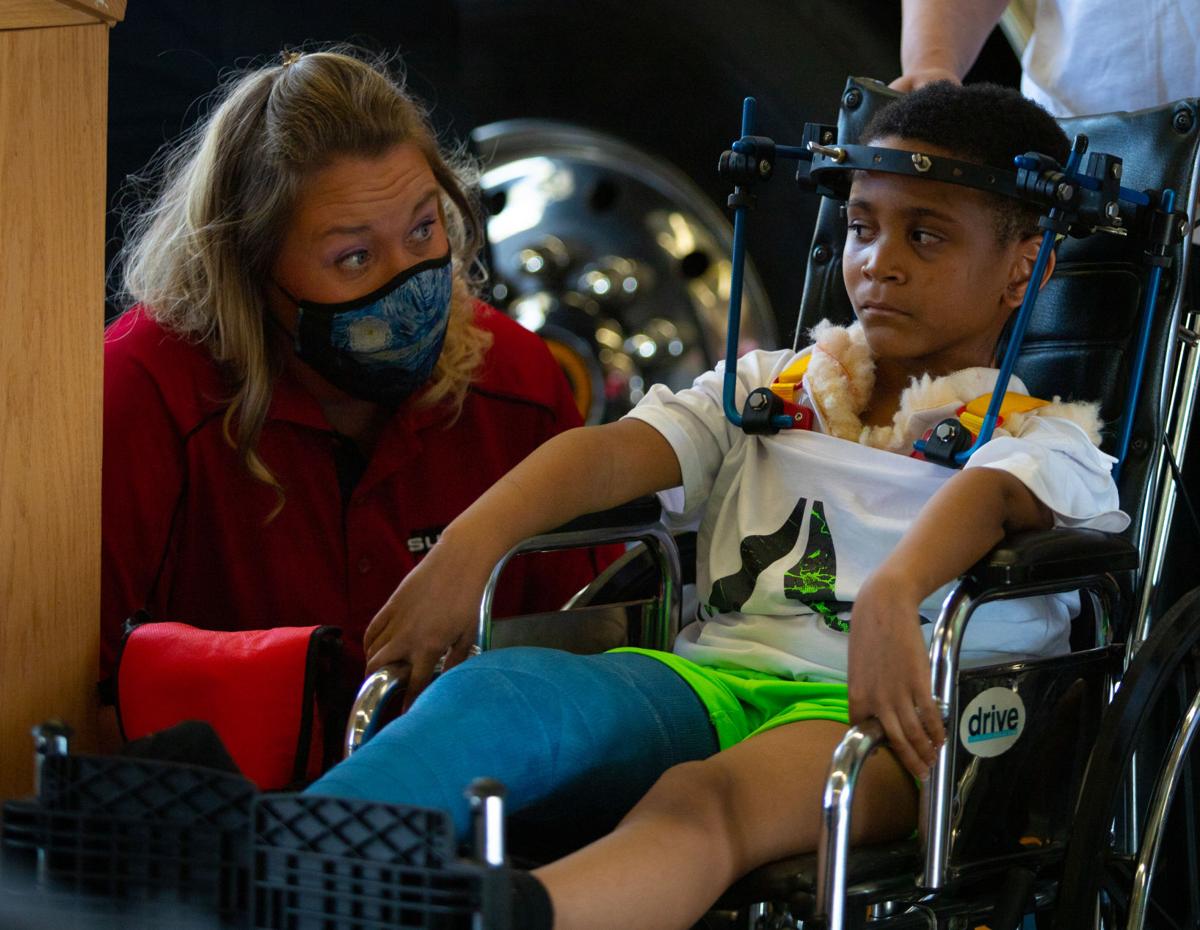 Fighting back tears, paramedic Allison Cheeseman, left, shares a moment with DeVon Dixon at Griffith Fire Station 31 on Wednesday evening. Cheeseman was on-site after Dixon saved his sister's life by pushing her out of the way of an oncoming vehicle. 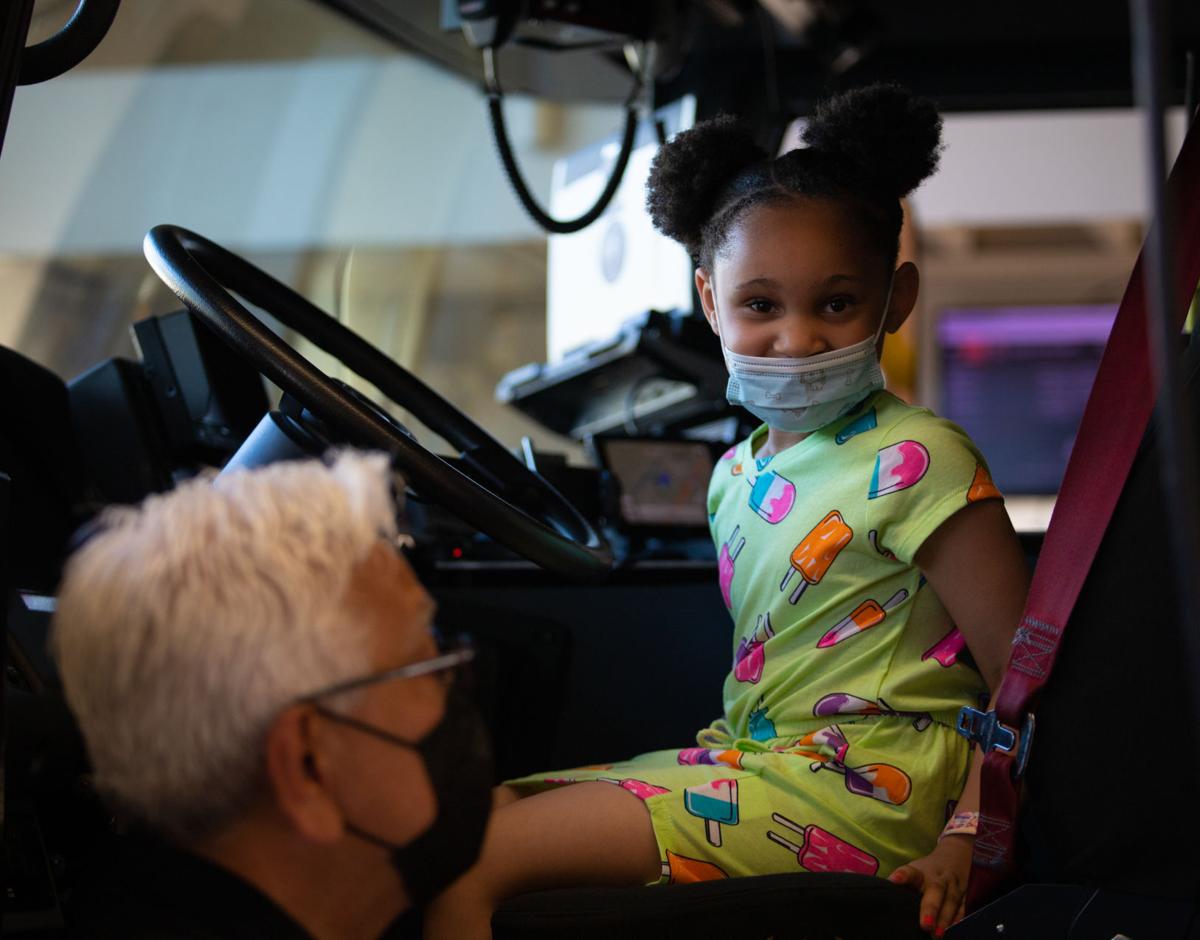 DeVon Dixon's sister smiles while getting a chance to sit behind the wheel in one of Griffith Fire Department's firetrucks on Wednesday evening.

GRIFFITH — In the 101-year history of the Griffith Fire Department, only three civilians have earned “honorary firefighter” status. All it takes is courage, bravery, compassion and heart.

With one push, DeVon Dixon showed he qualified.

Before family, friends, and first responders, Dixon, 7, was named an honorary firefighter Wednesday evening at Station 31.

“This is nice,” the second grader at Wadsworth Elementary said simply.

Others had more to say about the youngster who pushed his sister Caleah, 6, out of the way of an out-of-control vehicle.

“DeVon showed he had what it takes,” said Fire Capt. Joe Martin. “That takes a certain thing in people. As firefighters, we’re grown men signing up for service. DeVon’s courage is something you have to marvel at.”

Martin added, “It’s important we do something like this for the boy. The family has gone through a lot.”

Just before 8 p.m. May 1, police and medical personnel received a call of a person injured in the 1900 block of Park West Boulevard. DeVon Dixon was severely injured after being struck by a 2001 Acura outside the family’s apartment complex. The vehicle had jumped the curb, police said, when Dixon reacted and pushed Caleah to safety.

Griffith police Cmdr. Keith Martin reported no charges have been filed in the incident. Lab work, he said, showed the driver was apparently not under the influence of alcohol or drugs.

Dixon was airlifted to the University of Chicago’s Comer Children’s Hospital, returning home earlier this month.

Diamond Tetter, Dixon’s mother, outlined the boy’s injuries: broken collarbone, broken right femur, head lacerations and exposed skull, displaced fracture of the eighth and ninth ribs, and abrasions. The boy is also wearing a halo brace due to neck bones and ligaments in the neck being broken.

Still, the boy who dreams about being a superhero like his two favorites, Thor and Ironman, was taking in the awards ceremony rather matter-of-factly. He challenged the fire captain to Fortnite dancing and PlayStation games.

In school, Dixon is into multiplication.

“This is beautiful,” Tetter said of her son’s honors. “I’m just glad he’s still here with us.”

The mother added that her son is into sports, the solar system, and anything to do with outer space. She was not surprised at her son’s sibling heroics.

“He and his sister are like best friends,” Tetter said. “It happened so quickly, he did not think, he just reacted.”

Caleah Dixon, a kindergartner at Wadsworth, said her brother is “just amazing.”

Joe Martin, who will soon become Dyer's new fire chief, said DeVon’s actions impacted first responders at the scene, so much so that he was on their minds while on other calls that night.

“It’s super important to highlight what the young man did,” Martin said. “That kind of bravery should never be underestimated.”

“I’m honored to give this young man this award. He’s truly deserving,” the chief said. “Not everyone gets to save a life, and he did it at age 7. That’s incredible.”

The two previous honorary firefighter civilian honorees are Blake Louderber, cited in March 2012 for undergoing a kidney transplant at age 9. In November 2020, Carter Ray, 12, Louderber’s cousin, was recognized for undergoing chemotherapy for lymphoblastic leukemia. Despite their health issues, Martin said, the cousins showed compassion toward others.

The awards program featured gifts from community members and educators.

Eli Hernandez, who started a charity called My Favorite Superheroes, said Dixon’s heroics “completely moved me.” He presented the boy with superhero toys.

Allison Cheeseman, a Superior Ambulance paramedic who responded to the May 1 call, presented more gifts. She recalled DeVon in “very critical condition” at the accident scene.

“I will never forget you,” Cheeseman said. “I cried many tears for you. I prayed many prayers for you. You are an amazing little boy.”

Anthony Zarndt, an art teacher at Wadsworth, presented Dixon with a poster autographed by students, along with handmade get-well cards from all students.

Dixon’s father, Charles Dixon, was helping his son during a personal tour of a fire engine. The boy sat in the engine and learned about firefighting tools.

“He’s my best friend,” Charles Dixon said of the second-youngest of his four children. “He was unbelievably heroic. He’s just that type of kid, always taking care of his little sister.”

The family has established a GoFundMe account to help pay the boy’s medical expenses.

“You see how caring the family is,” Martin said. “DeVon is a very caring big brother.”

No major injuries after plane runs off Texas runway

No major injuries after plane runs off Texas runway

The department,  which was created on Aug. 6, 1920, is actually 101 years old, but the celebration was delayed after the COVID-19 pandemic struck last year.

Honorary Griffith Firefighter DeVon Dixon receives praise from a first responder after displaying acts of courage and bravery by saving his sister's life.

Joined by family, DeVon Dixon, bottom left, watches as members of Griffith Fire Department line up to sign his cast on Wednesday evening.

Fighting back tears, paramedic Allison Cheeseman, left, shares a moment with DeVon Dixon at Griffith Fire Station 31 on Wednesday evening. Cheeseman was on-site after Dixon saved his sister's life by pushing her out of the way of an oncoming vehicle.

DeVon Dixon's sister smiles while getting a chance to sit behind the wheel in one of Griffith Fire Department's firetrucks on Wednesday evening.