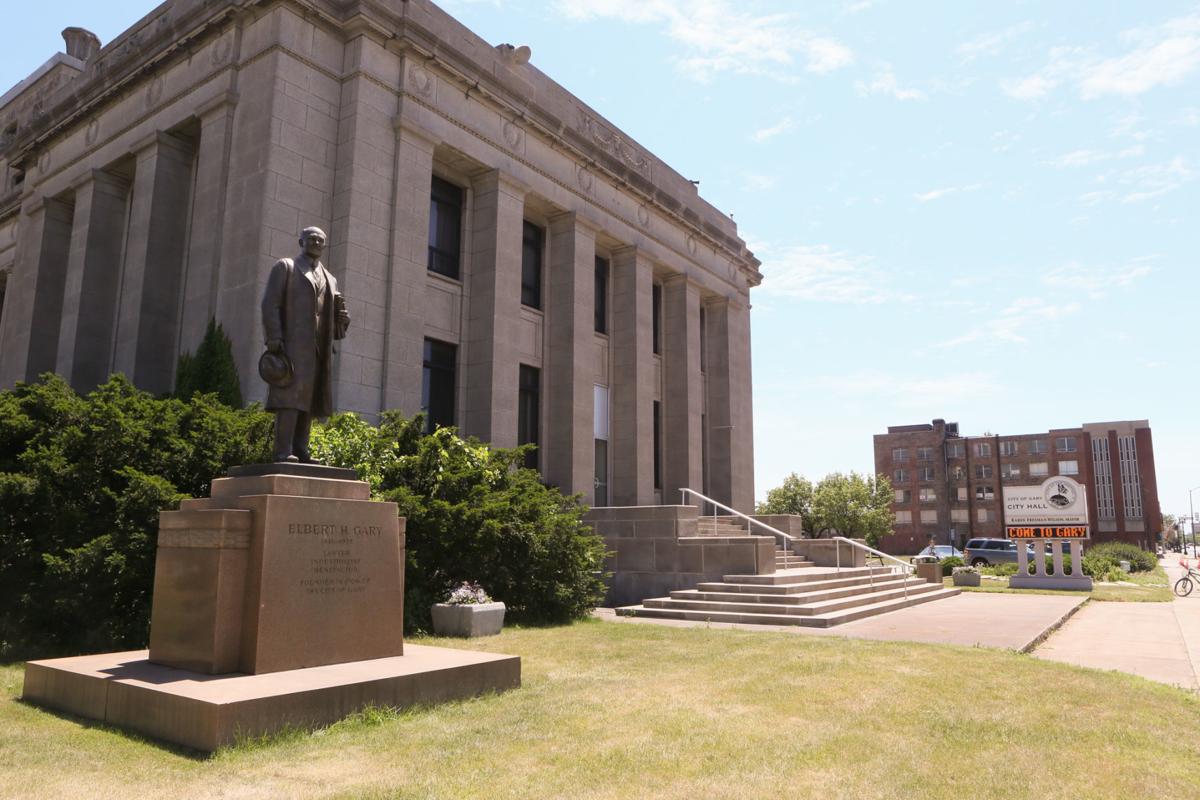 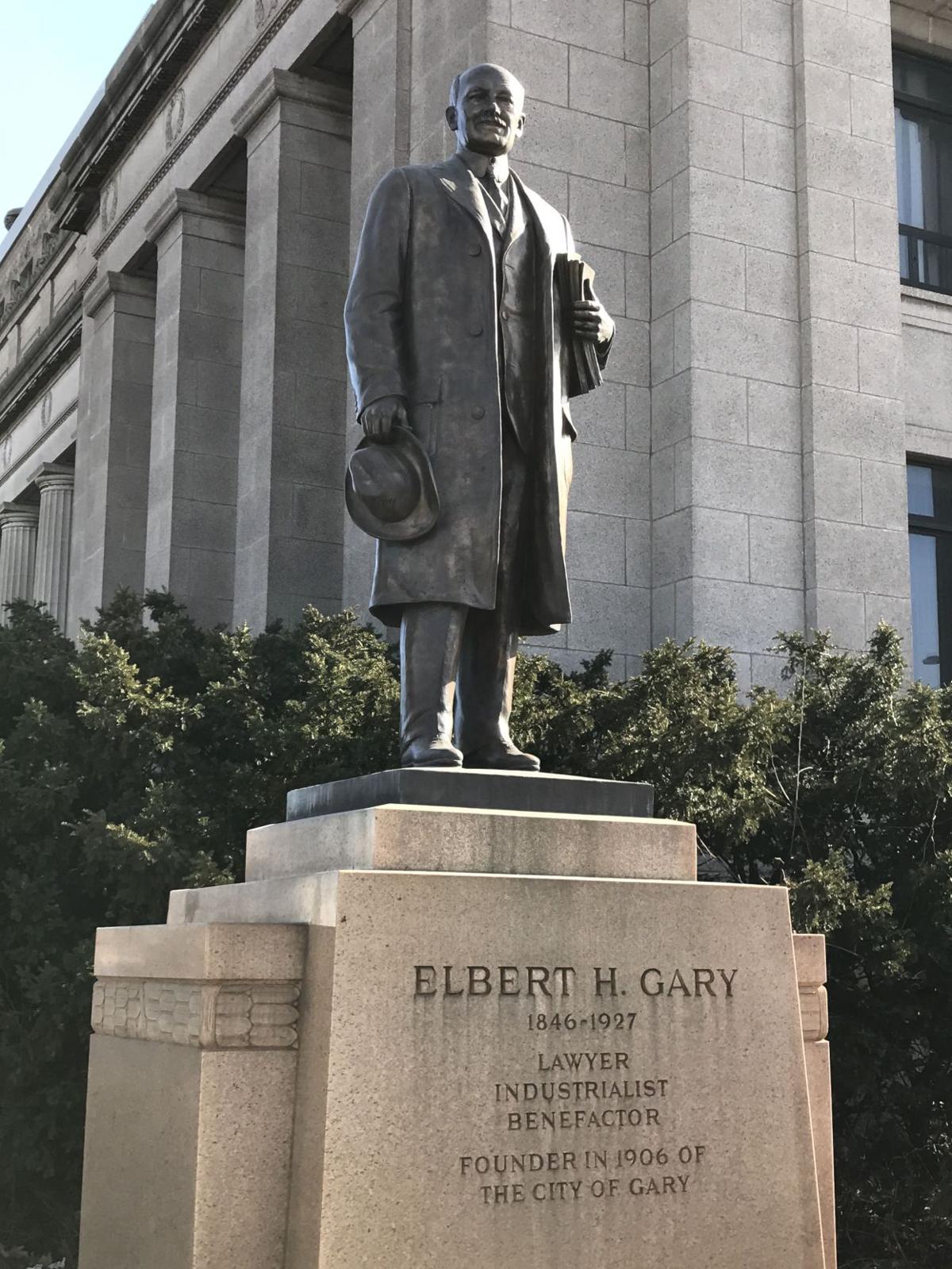 A statue honoring Elbert H. Gary, founder of the city named for him, stands in front of Gary City Hall.

GARY — A "welcoming city" ordinance addressing the city's interaction with federal officials on immigration enforcement has the support of Mayor Karen Freeman-Wilson, but has some council members raising questions about its necessity.

The ordinance is scheduled to be voted on at Tuesday's City Council meeting.

The ordinance states "it is the intent of the city of Gary to support enforcement as a federal matter," but says immigration enforcement actions are a federal responsibility and city resources won't be used to enforce federal laws.

The ordinance covers a broad range of other issues relating to immigrants as well. For instance, when it comes to applications related to municipal benefits, the ordinance calls for the city to delete questions regarding citizenship or immigrant status — other than those required by statute, ordinance, federal law or court order.

At a recent Public Safety Committee meeting where the proposed ordinance was discussed, Gary resident Ruth Needleman said the ordinance helps make the city safer. She said if people are afraid police are going to drag them in and they could be deported, they are not going to report crime or cooperate with authorities.

She also said the city does not have the resources or funding to do the activities that are constitutionally the responsibility of the federal government.

"I think it is looking to protect all residents of Gary and not single out anyone and not have our resources, human and financial, spent really against the Constitution," Needleman said.

Organizers are trying to have similar ordinances planned elsewhere in Northwest Indiana and Needleman said one is about to be considered by the East Chicago City Council.

Gary Council President Ron Brewer, D-at large, suggested some of the policies outlined in the ordinance are already covered by other federal laws and city ordinances or could be included in a policy manual. He also contended the city does not have a large immigrant population.

"I just don't see the need for this," Brewer said.

Councilwoman LaVetta Sparks-Wade, D-6th, agreed with Brewer. She also wondered whether the city was opening itself up for attacks from the Republican super-majority in the state Legislature.

An executive order signed by President Donald Trump also limits federal funding if a state or municipality doesn't adhere to 8 U.S.C. 1373 regarding cooperating or communicating with the federal government. In addition, Indiana prohibits local governments from refusing to cooperate with federal immigration authorities to protect non-citizens who have entered or remain in the United States without legal permission.

Attorney Alfredo Estrada, an attorney for the group trying to have the welcoming ordinance adopted in Gary and elsewhere in Northwest indiana, has said in the past it would not endanger federal funding. The ordinance notes that it does not prohibit any municipal agency from sending to, or receiving from, any local, state, or federal agency, information regarding an individual's citizenship or immigration status.

The sponsor of the 2011 state law dealing with immigration issues, Mike Delph, R-Carmel, said subject matter experts who reviewed the ordinance thought the city was getting very close to declaring itself a sanctuary city and that Gary might be opening itself up for a lawsuit, which could be filed by any resident of the state as well as the attorney general.

He said with all the limitations in the ordinance regarding cooperation with Immigration and Customs Enforcement officials, it is at minimum in  violation of the spirit of the state law. In regard to federal immigration law, Delph believes that by approving the ordinance, the city also would be "inviting a major standoff with the U.S. Department of Justice," which he thinks Gary with all its other problems does not need.

Councilwoman Rebecca Wyatt, D-1st, said the ordinance expressly states it does not violate federal law. She said the attorney who prepared it assured her he was careful it would withstand a challenge.

Wyatt said the ordinance "just says if the federal government wants to arrest somebody they have to have a valid warrant. That's not asking a lot. There are communities which will turn over people who they suspect are undocumented without a valid warrant. This is saying we won't do that."

Wyatt said the ordinance "would say the city of Gary welcomes you to come forward and be part of the community."

GARY — By a 6-3 vote, the City Council approved a welcoming city ordinance designed to provide some protection for non-citizen residents livin…

GARY — A new facility that is providing housing for more than 40 previously homeless veterans has meant the world to U.S. Army veteran Marjori…

Group protests use of Gary Airport for deportations

A statue honoring Elbert H. Gary, founder of the city named for him, stands in front of Gary City Hall.