Closed but not forgotten, Roosevelt High School gets state historical marker
Share this
{{featured_button_text}}
1 of 2 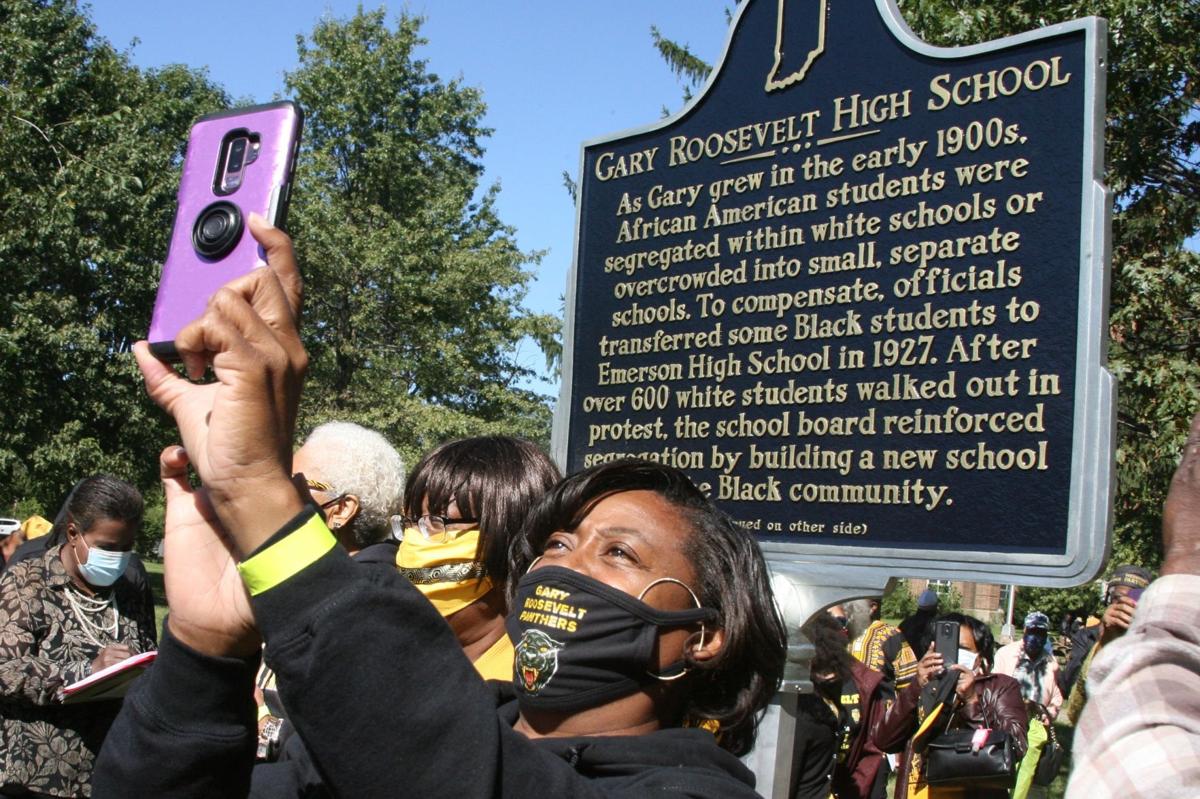 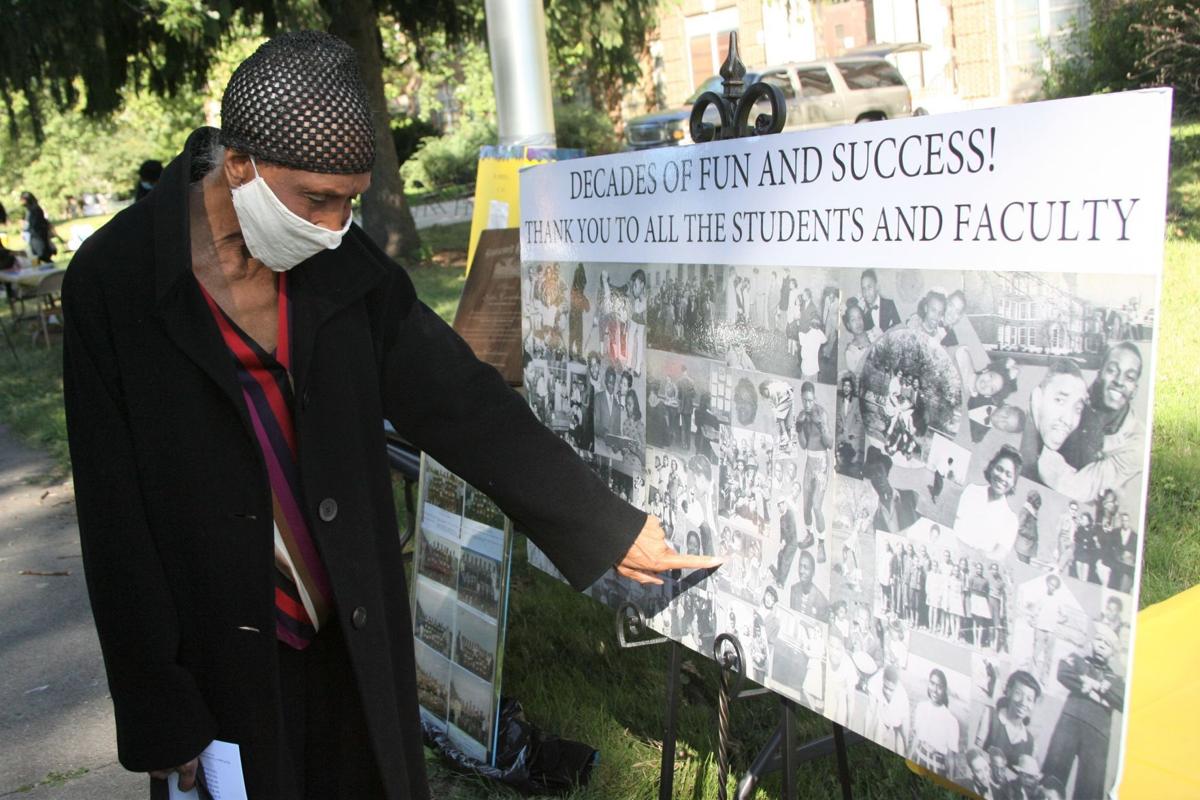 Ruth Hoyle, of Gary, a former librarian at Gary’s Roosevelt High School, studies images from the school’s past Saturday prior to an unveiling of an Indiana Historical Society marker along 25th Avenue. Hoyle taught and was librarian at the school for 38 years.

GARY — Historic Roosevelt High School may be closed, but it will not be forgotten. As Panther faithful like to say, the ‘Velt don’t melt.

Memories were rekindled Saturday when an Indiana Historical Bureau state marker was dedicated at the first and only high school built exclusively for African American students in Gary.

Ruth Hoyle, who retired in 1990 after 38 years at Roosevelt, pointed to people she remembered from images on poster board. The Gary woman remembered “the great faculty and student body” at Roosevelt.

Opened in 1931 and closed in 2020, Roosevelt High School was more recently added to Indiana Landmarks' list of 10 Most Endangered Places in Indiana because of its historic significance with the Gary community. The building is already listed on the National Registry of Historic Places.

Before a sea of Roosevelt Panther black and gold socially distanced outside the school, the Rev. James Protho, pastor of Unity Baptist Church, noted that “even though the building has been closed, our will has not been closed,” citing the growing need for black educators.

The school has sat empty since February 2019's polar vortex wreaked havoc on the building's heating system, composed of a series of difficult-to-access pipes original to the 90-plus-year-old structure.

The Gary Community School Corporation announced it would not pursue the estimated $10 million in renovations Roosevelt needed, but will instead issue a national request for interest among others interested in rehabilitating the building, either for use as a school or another purpose beneficial to the Gary community.

Larry Davis, vice president of the National Roosevelt Alumni Association, said, “This place matters. It deserves to be preserved and revitalized for future generations.”

According to Brad Miller of the Indiana Historical Bureau, the marker is the 675th around the state and 13th in Lake County. The two-sided sign lists some of Roosevelt’s historical background.

In April, EdisonLearning, the for-profit educational services provider for Gary's Theodore Roosevelt College and Career Academy, a charter school at the former Roosevelt site, ended its relationship with the Gary Community School Corp. at the end of the school year. The academy officially closed with the end of the 2019-2020 academic year.

EdisonLearning had voiced interest in refurbishing the Roosevelt building as a state-of-the-art STEM academy and said it had secured $25 million in private investments to make it happen. EdisonLearning has since withdrawn that proposal.

Speaking at the unveiling, Freeman-Wilson asked the audience to “take a moment to remember the sacrifices and what those teachers and administrators did for us. Use this to remember what we owe our children. Ensure they have the schools and teaching staff that will provide them with everything we had.”

Current Mayor Jerome Prince pledged his support to do what he can for the school. Prince, who attended his first Roosevelt basketball game in 1970, recalled witnessing the pride and history associated with the school.

Muriel Rondo Hanks, of Gary, president of the Roosevelt alumni class of 1955, recalled, “I had a sense of belonging (at Roosevelt) and I knew I could fit in and deal with life’s adversities.”

Johnnie Hamler, of Schererville, a ’66 grad, remembered “the people — we made the school. I remember the faculty, the administration, the sportsmanship.”

Pauline Tatum, of Dallas, knows something about the school’s leadership. A 1989 graduate, Tatum said her grandfather, H. Theo Tatum, served as Roosevelt’s principal for about 30 years.

“This is our house,” Pauline Tatum said. “We will fight until the game is over. The fight is on and it ain’t over.”

Gary School Superintendent Dr. Paige McNulty said the school system’s website has posted a request for community input on the Roosevelt building. “We want to preserve this historical building and do something positive with it for the community,” she said.

Judith Leeks-Mead, president of the National Roosevelt Alumni Association, encouraged her fellow Roosevelt grads: “We’ve learned, we’ve loved, and sometimes we’ve lost, but we’re not going to lose this one.”

Board members say their opinion is being silenced. District leaders say they're following state law. Here's what happened when Gary schools abruptly cut short its Monday advisory board meeting.

The Gary Community School Corp. is seeking outside interest in how to revitalize its historic Roosevelt High School building, closed after 2019's polar vortex. Here's how to get involved.

Ruth Hoyle, of Gary, a former librarian at Gary’s Roosevelt High School, studies images from the school’s past Saturday prior to an unveiling of an Indiana Historical Society marker along 25th Avenue. Hoyle taught and was librarian at the school for 38 years.