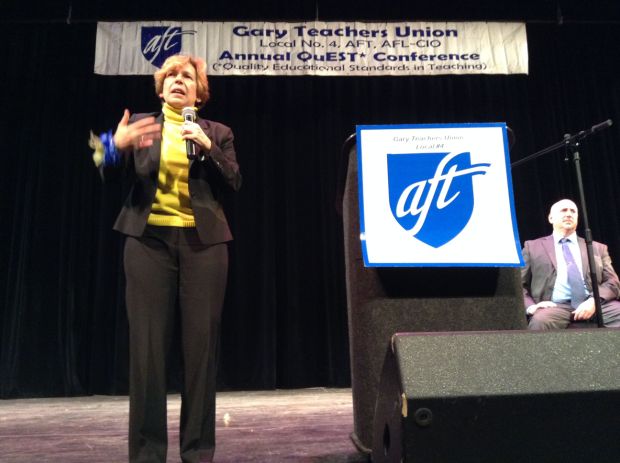 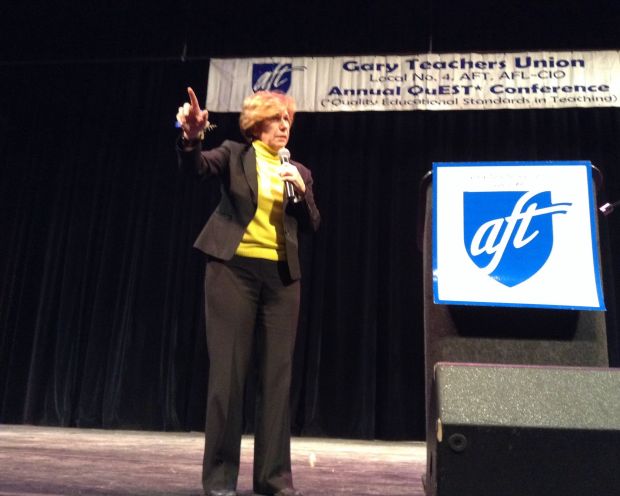 Randi Weingarten, national president of the American Federation of Teachers, made a stop in Gary on Thursday to encourage teachers during their annual fall conference.

GARY | Randi Weingarten, president of the National American Federation of Teachers, encouraged Gary teachers Thursday to fight for the heart and soul of public education.

The union leader was the keynote speaker at the 2013 QuEST Teachers Conference at West Side Leadership Academy, an event sponsored by Gary Teachers Union Local No. 4. The two-day annual event includes workshops, guest speakers and entertainment.

Weingarten said she sympathized with Gary teachers and other educators across the state who have worked in public education under former state Superintendent of Public Instruction Tony Bennett, former Gov. Mitch Daniels and new Gov. Mike Pence. Weingarten touched on the controversial A-F grade system championed by Bennett and the revelation Bennett changed grades to benefit the charter school of a prominent Indianapolis donor.

"Follow the money," Weingarten said as she moved about the stage at West Side. "Instead of being honest about what happened, he (Tony Bennett) tried to fix it."

Weingarten said the Gary Community School Corp., like others across the country, lost students to charter and private schools. She said public schools are the center of the community, and she encouraged the district to "collaborate" with the community and businesses to promote public education.

"Parents tell us they want kids to learn and be safe. People trust those people who are closest to their kids," Weingarten said, referring to teachers.

Weingarten also talked about the problem of school closings with decreasing enrollment, something she said no school district wants to face.

Weingarten also paid homage to longtime Gary Teachers Union President Sandra Irons, who led the union for 37 years. Irons retired in 2008 and died a year ago.

"Every time there was an issue, she stood up strong for teachers," Weingarten said of Irons.

During the conference, the union honored secretary Shirley Davis, who has worked for the union for 47 years. Union leaders said Davis, who is retiring, knew practically every member by name, proofed every piece of paper that came through the union and knew the contract in its entirety.

Students from the McCullough Academy of Girls Steppers performed, along with a rendition of "I Believe I Can Fly" by Nathan Mason, a student at Wirt-Emerson Academy.

Gary Superintendent Cheryl Pruitt commended the girls academy for improving test scores, Banneker for continuing to be a Four Star School and Bailly Elementary School for increasing test scores and advanced technology throughout the building.

Randi Weingarten, national president of the American Federation of Teachers, made a stop in Gary on Thursday to encourage teachers during their annual fall conference.