WATCH NOW: Activists gather at Gary City Hall to be 'United Against Racism'
Share this
1 of 3 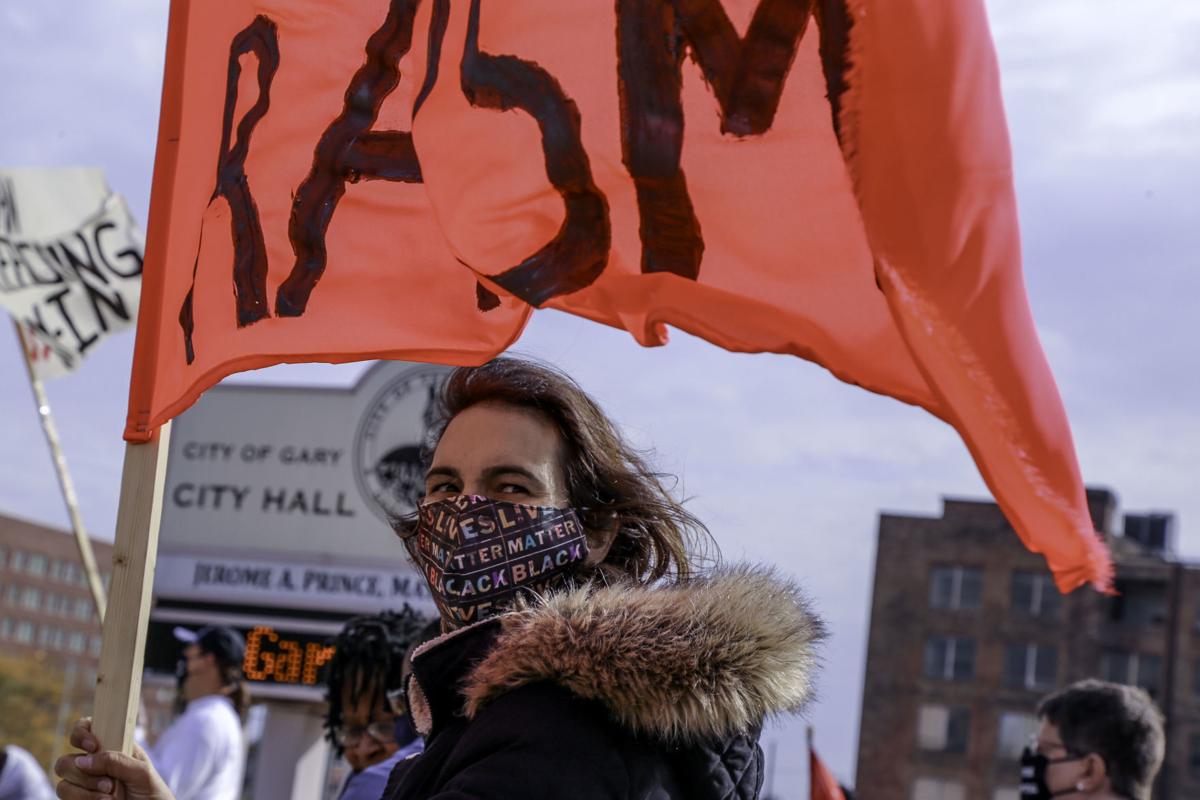 Gina Bell, of Dyer, joins around 50 people from some 20 Northwest Indiana organizations Saturday on the steps of Gary City Hall for a rally supporting social justice causes. 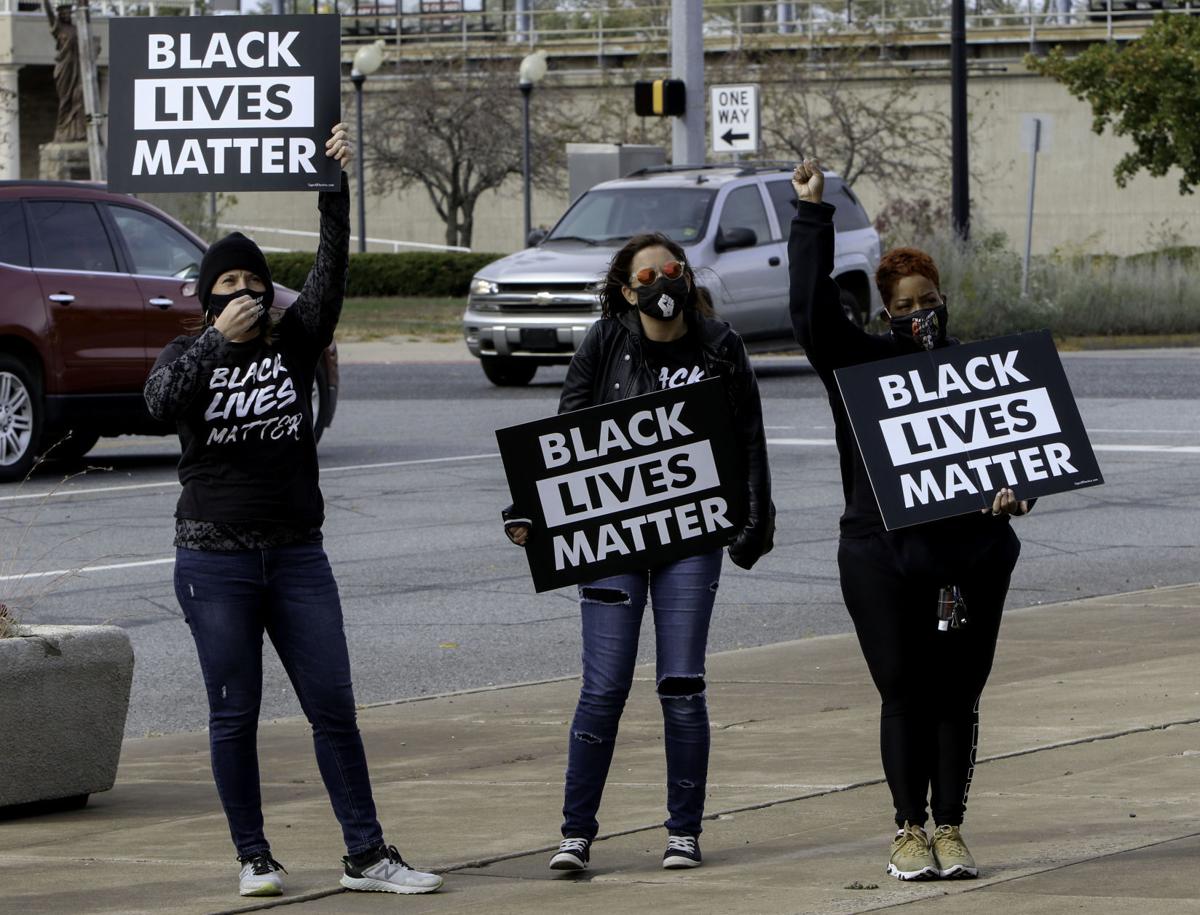 From left: Ellie Belli, Erica Burnett and Brandy Sacino, all of of Highland and members of the Highland United Against Hate organization, listen to speakers Saturday at Gary City Hall as around 50 people from some 20 Northwest Indiana organizations rally for social justice causes. 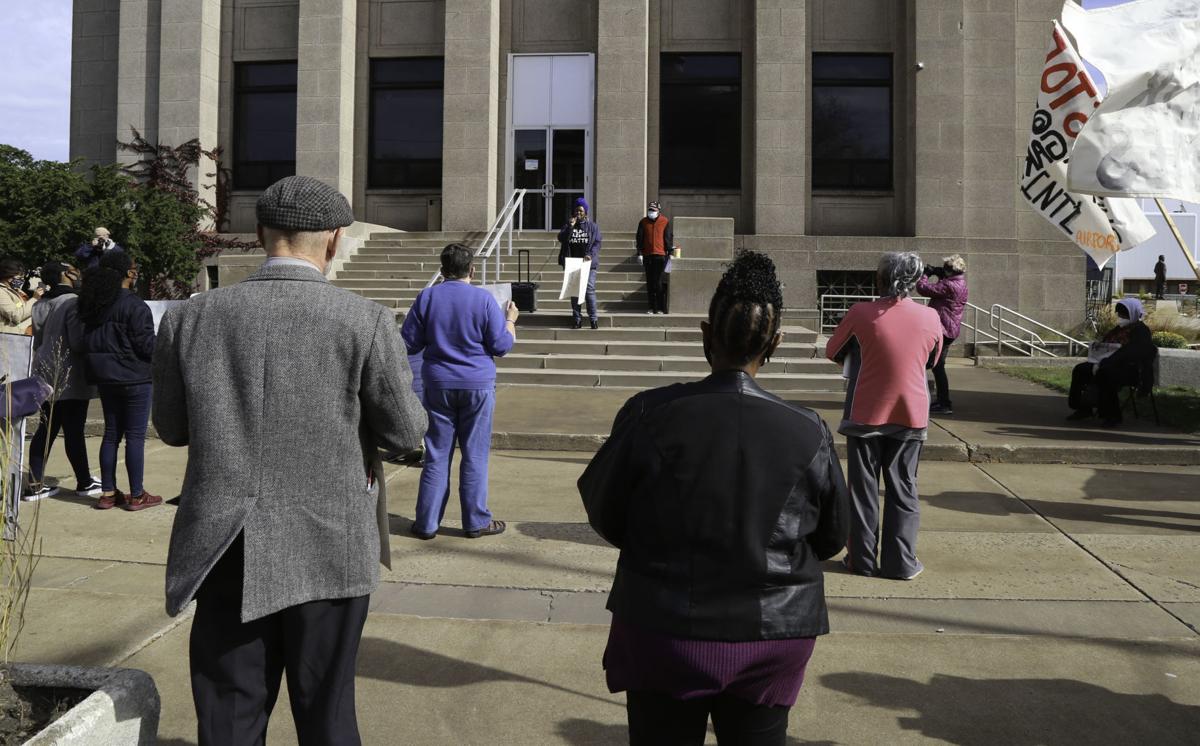 Kim McGee, of Black Lives Matter of Gary and Northwest Indiana, speaks Saturday on the steps of Gary City Hall during a rally for social justice causes.

GARY — Standing on the windy stairway to Gary City Hall, a demonstrator called out to the crowd, “Because racism means?” The crowd chanted replied, “We have to fight back.”

Fifteen organizations gathered Saturday afternoon in Gary to join under the banner, “United Against Racism,” a coalition that has recently formed to target issues like racism, injustice, police brutality, deportation and to advocate for those who are vulnerable amid the pandemic.

After meeting at Tolleston Park, the group marched to Gary City Hall where several members spoke about a myriad of issues, from police brutality to immigration deportations happening at the Gary/Chicago International Airport.

The demonstrators were from various backgrounds, from local school staff members to young environmental activists.

The group also called for justice for those who died in police-involved shootings, such as Breonna Taylor. Among the names written on protesters’ signs were those of local residents such as Rashad Cunningham, Melvin Bouler and Jamal Williams. Patrice Patterson-Davis held a sign with a photo of her son, Jamal Williams, who was shot and killed by a security guard on June 16 at Community Hospital in Munster.

“But we are here for justice for Jamal Williams and justice for all lives, black lives, that have been taken by police brutality and all the racism we are experiencing,” Patterson-Davis said. “But let me say this: black lives won’t matter unless they matter to black people. That must be the core of us experiencing this. Black lives have to matter to us and we have to show other people that black lives matter to us. It must start at home. We must start with each other.”

Sixteen-year-old activist Dani Sipp took the mic, speaking on environmental activism and the importance of voting in November.

Kim McGee, of Black Lives Matter NWI-Gary, called for the creation of a civilian review board for the Gary Police Department, something she said her group has advocated for since 2015. In June, Gary Mayor Jerome Prince signed an executive order creating a police use of force commission, which will include civic and business leaders, community activists, faith leaders and community organizations. However, McGee said that while a member of her organization is on the committee, there is still much to be desired from the initiative.

“It’s been a long-term project and we suspected it would be a long-fought battle,” McGee said. “But the commission now only is able to give recommendations and look into areas of potential study, the group doesn’t have any real power. We want an oversight civilian review board.”

Ruth Needleman, an organizer for United Against Racism, said it took a lot of work for the organizations to converge, but she said she believes this is needed now more than ever.

“Because right now, uniting against racism is absolutely necessary,” Needleman said. “We are facing a rising threat of fascism and violence.”

Needleman said the group will hold demonstrations and continue to seek different ways to put action behind their message of anti-racism.

The group will reconvene for another caravan and protest on Oct. 24 in East Chicago at Nunez Park. Organizers said more information will be announced this upcoming week.

Protests in Minnesota as former officer is charged

Golf carts would be restricted to residential streets, which are loosely identified as city roads without pavement stripes on them.

No one injured in afternoon shooting on Bishop Ford Freeway

The shooting shut down southbound lanes of the Bishop Ford Freeway at Sibley Boulevard.

Trump supporters flood Valpo park in get out the vote rally

Hundreds of his supporters flocked to Central Park to buy Trump merchandise and hear messages aimed at getting out the vote.

In a lawsuit filed last month, attorneys for Melvin Bouler's family said his homicide was a result of "hyper-aggressive" policing. Gary officials declined to comment, citing the pending litigation.

Gina Bell, of Dyer, joins around 50 people from some 20 Northwest Indiana organizations Saturday on the steps of Gary City Hall for a rally supporting social justice causes.

From left: Ellie Belli, Erica Burnett and Brandy Sacino, all of of Highland and members of the Highland United Against Hate organization, listen to speakers Saturday at Gary City Hall as around 50 people from some 20 Northwest Indiana organizations rally for social justice causes.

Kim McGee, of Black Lives Matter of Gary and Northwest Indiana, speaks Saturday on the steps of Gary City Hall during a rally for social justice causes.