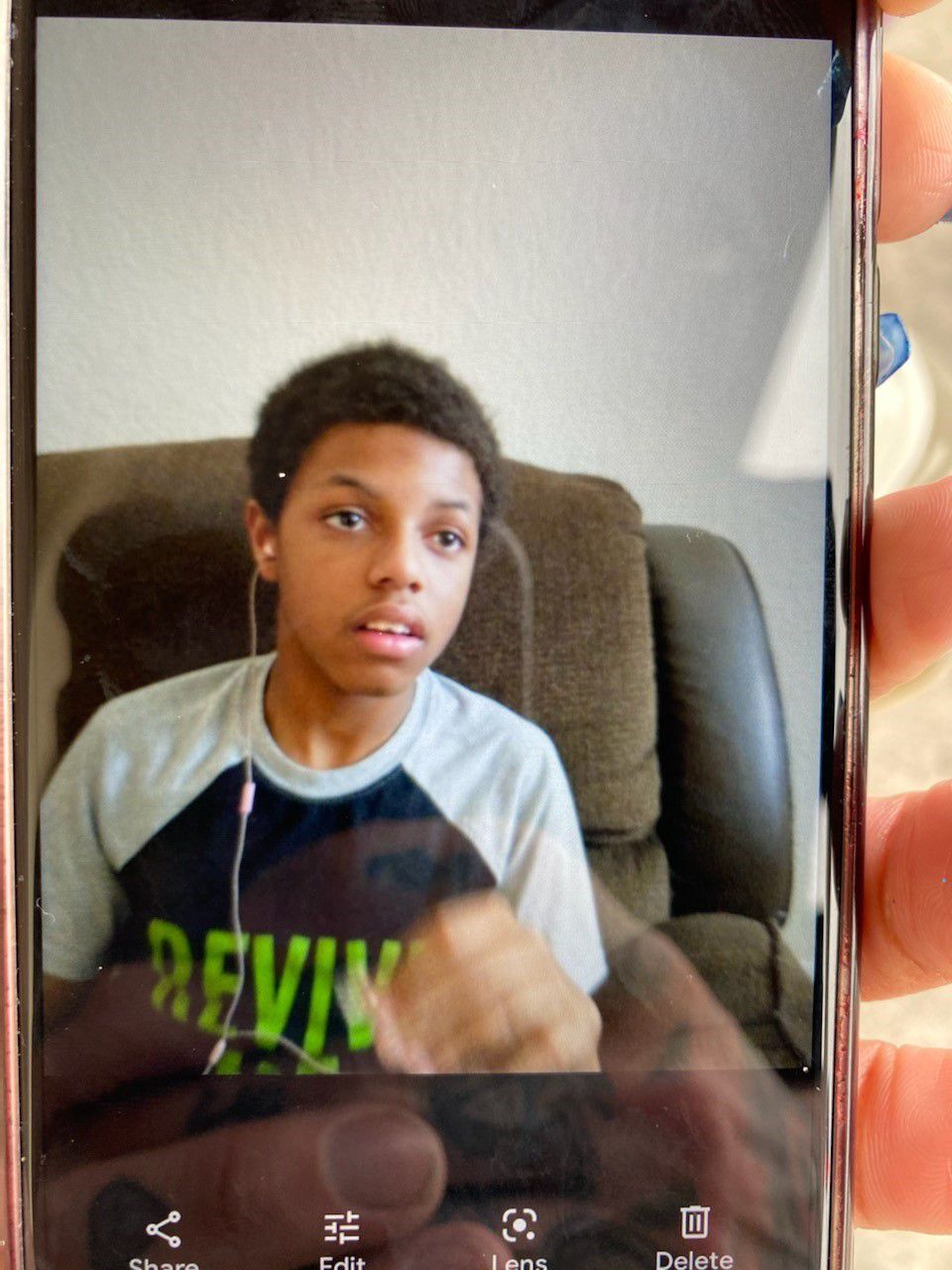 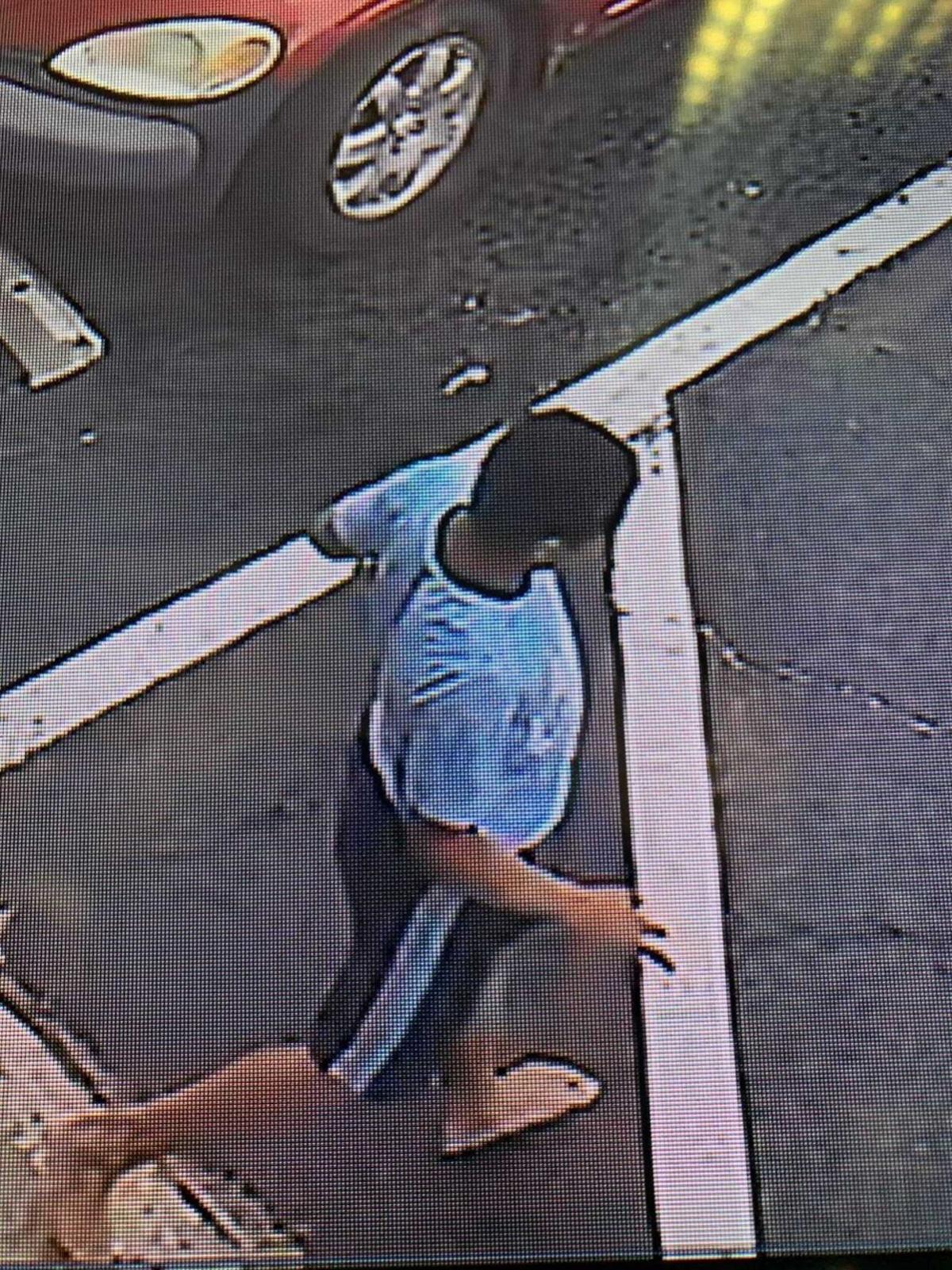 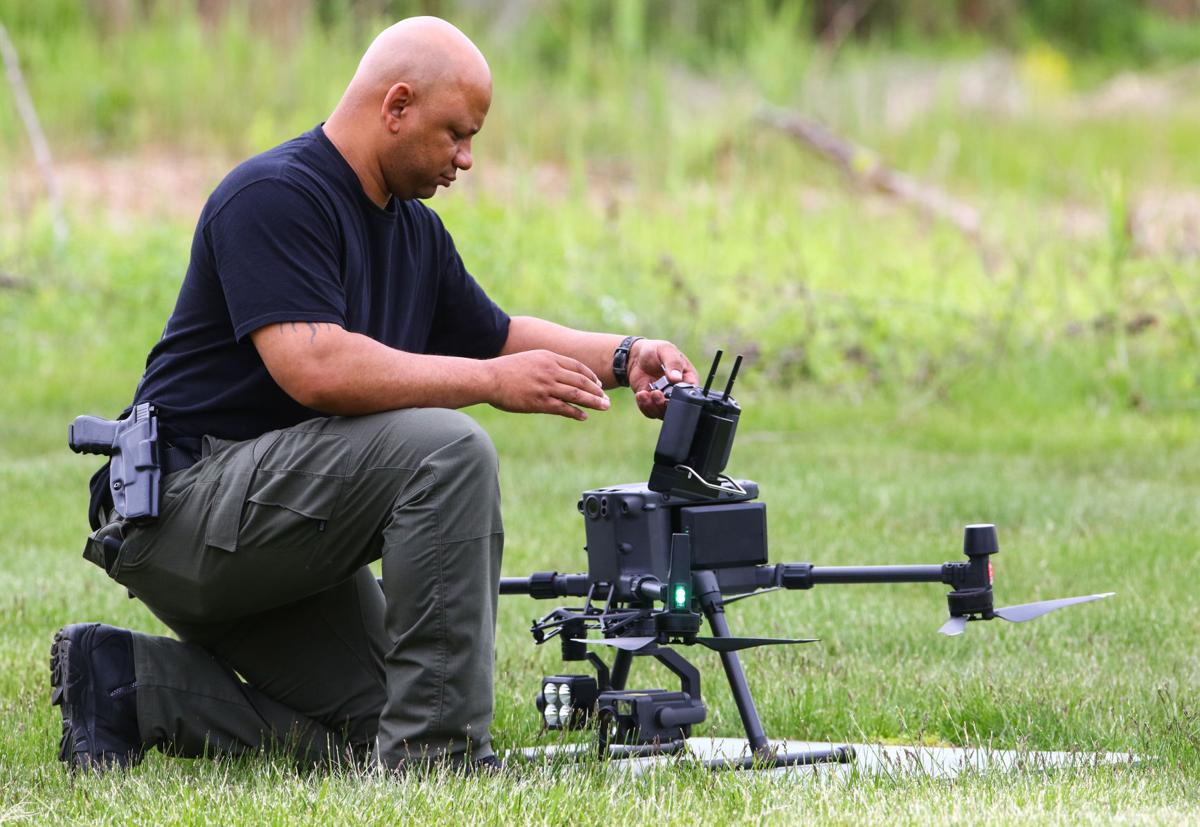 Drones were one of the tools authorities were using to help search for 12-year-old Kyrin Carter, who went missing Saturday. 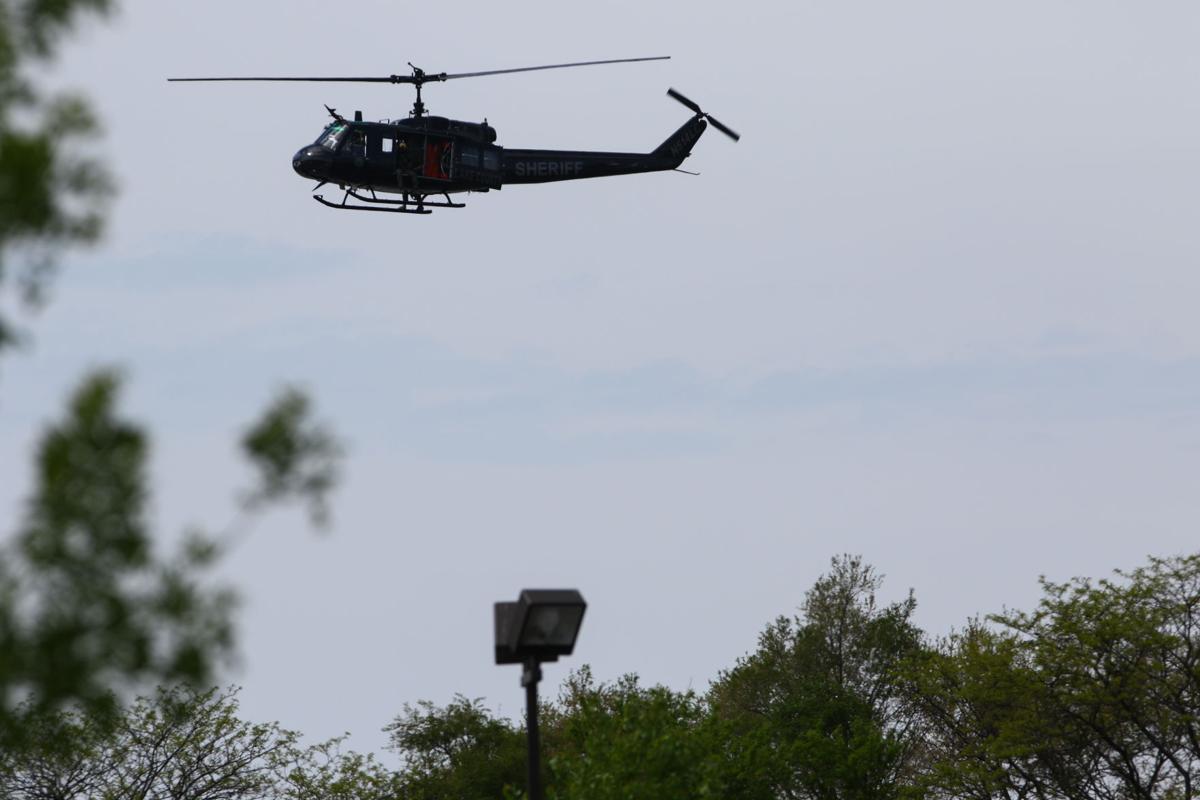 One of the Lake County Sheriff's Department's Huey helicopters scans above the treeline near the Best Western hotel in Hammond Sunday. 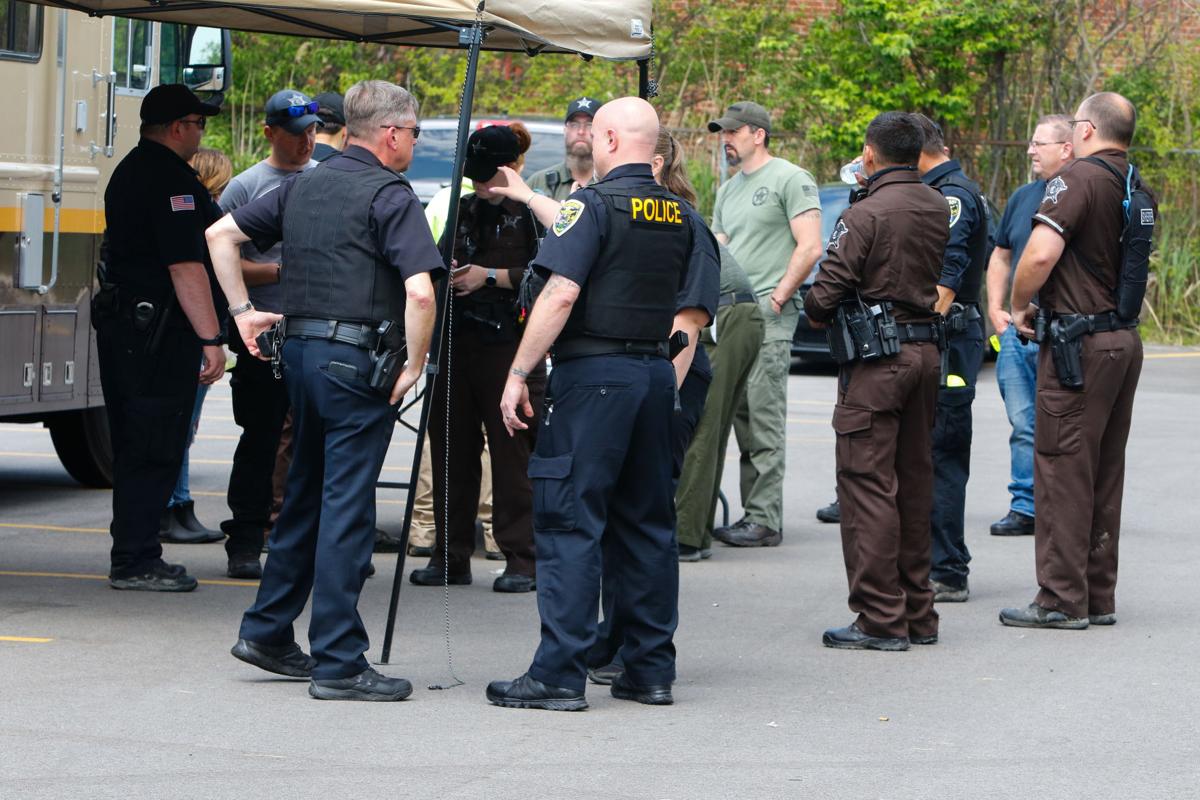 Multiple agencies gathered and strategized their search outside the Orbital Engineering building Sunday in Hammond near the Best Western, where 12-year-old Kyrin Carter was last seen. 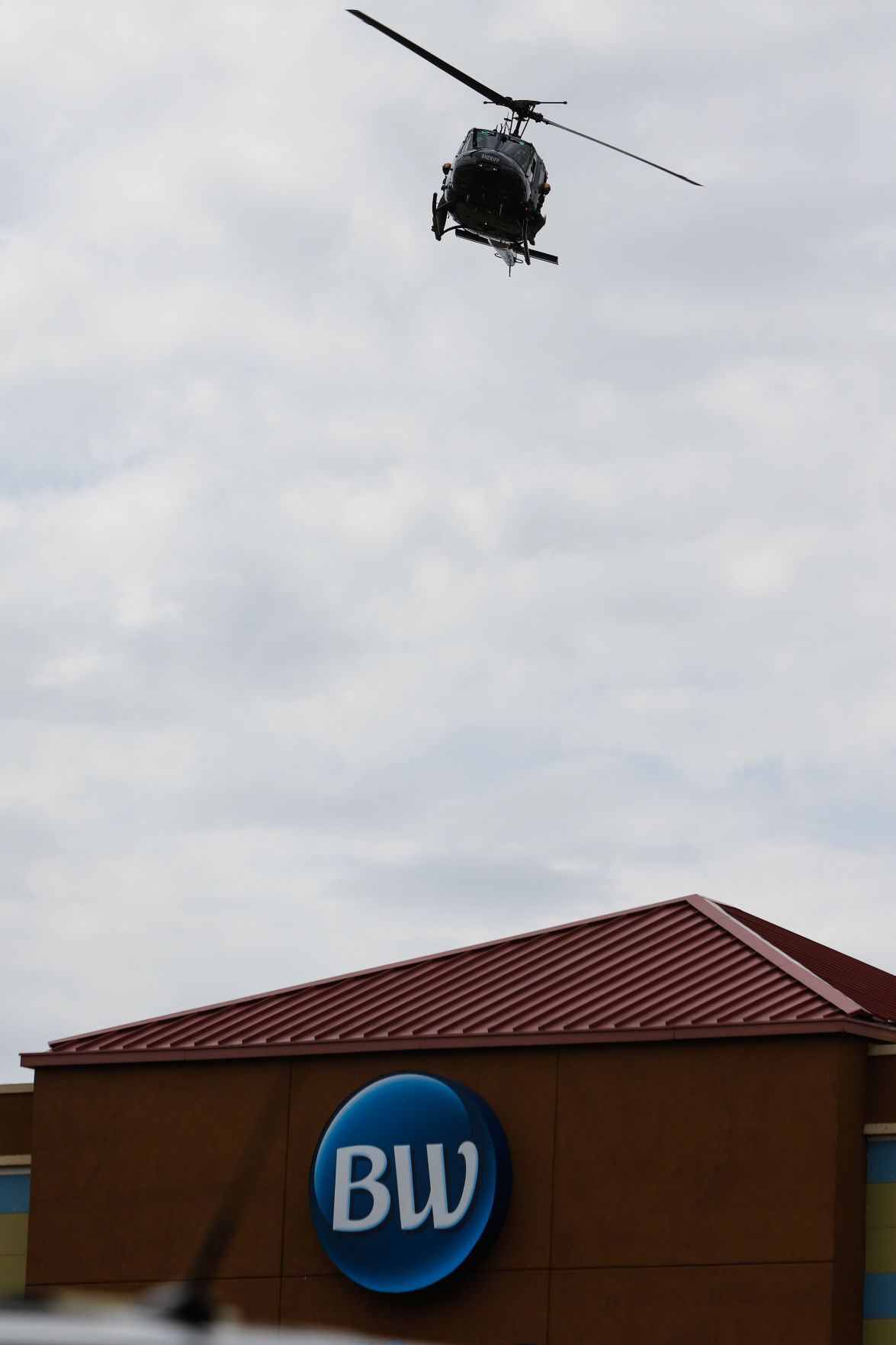 HAMMOND — Flashlights raked across the dark surface of the Little Calumet River Monday night as volunteers and multiple police agencies continued to search for a missing 12-year-old boy.

A statewide Silver Alert was issued for Carter on Saturday.

The search Monday was scaled back from efforts Saturday and Sunday, but still included K-9s, helicopters, drones and regular patrols, Kellogg said. About 40 people, almost all volunteers, were participating in Monday's search efforts, he said.

Hundreds of volunteers and 25 different police agencies from across Northwest Indiana and neighboring Illinois have helped in the search, which has lately been focused on the river that runs behind the motel. Drones, helicopters and boats have been deployed.

Police have twice sent a dive team into the Little Calumet River, which is about 15 to 20 feet deep in the stretch that marks Hammond's southern border. Divers turned up wood and debris about four blocks west of the Best Western Monday evening.

"There was a concentrated effort down the river," Kellogg said. "The K-9s were able to locate a scent where they thought was a good, strong location. Two dogs from different locations converged on the same area. So we called the dive team. They searched that area. We sent two different dive teams in and we came back empty."

Surveillance video showed Carter leaving the hotel by himself Saturday. There's limited video since the surrounding area consists largely of marshland in the watershed and industrial businesses. One video police reviewed caught movement by the river, but it turned out to likely be searchers for Carter and not Carter himself based on the time it was recorded, Kellogg said.

He was described as black, 5-foot-4, 130 pounds, with brown hair and brown eyes. He was last seen wearing a light blue shirt, dark blue shorts with a light blue stripe and no shoes.

Anyone who thinks they have spotted Carter is asked to call 911 immediately and keep an eye on him, but not approach him, until police arrive.

"He is autistic and he's probably very scared," Kellogg said. "If you spot him, do not approach him. Maintain visual contact with him and call 911 immediately."

Carter and his immediate family are from Kansas City, Missouri, and were visiting family this weekend, Kellogg said.

His mother, Danielle Duckworth, told NBC 5 Chicago he slipped out the back door during an engagement party and always loved the water.

The Best Western sits just north of the Little Calumet River, near Cline Avenue and Interstate 80/94.

"We're still looking," Kellogg said. "We'll be out here all tonight and again tomorrow morning. We'll be out in the boats again. Our helicopters and drones will be up to. And of course, people will be out."

Anyone interested in volunteering with the search can walk the banks of the Little Calumet River in Hammond and Highland without getting too close to where they would risk falling in, Kellogg said. The turnout of volunteers has been much larger than normal for a missing person search.

"I've got numerous, numerous phone calls from parents of autistic children," he said. "They said they know someone else would come out for me and they know how it is so they want to come out and help. A lot of it is that and a lot of it is a good community here in the Region coming together and saying, 'hey, we're not going to let this happen.'"

Authorities expanded weekend searches to the woods surrounding the hotel, the river and marsh area, an industrial strip along the interstate, some residential areas between Cline and Kennedy avenues and as far south as Ridge Road, and into Hammond's Hessville neighborhood, south of 169th Street.

Residents within a three-mile radius of the hotel are asked to review home surveillance video or doorbell cameras to check if Carter might have been in their area.

Residents also are asked to check any areas where a child could hide, including garages, in and under parked cars or boats, in public restrooms at parks, or any other area that hasn't been checked in a while, Kellogg said.

Anyone with information not related to Carter's immediate whereabouts is asked to call Detective Sgt. Nicole Duncanson at 219-852-2968.

What exactly is at the bottom of this mysterious 'blue hole?'

What exactly is at the bottom of this mysterious 'blue hole?'

Authorities from at least 15 agencies from across Northwest Indiana and civilian volunteers are continuing their search for missing 12-year-old Kyrin Carter in south Hammond Sunday.

The Lake County Sheriff's Office is looking for James P. Mitchell, who escaped from court monitoring after cutting his GPS monitor off.

"People are calling every day. I don't have enough used cars to sell."

Drones were one of the tools authorities were using to help search for 12-year-old Kyrin Carter, who went missing Saturday.

One of the Lake County Sheriff's Department's Huey helicopters scans above the treeline near the Best Western hotel in Hammond Sunday.

Multiple agencies gathered and strategized their search outside the Orbital Engineering building Sunday in Hammond near the Best Western, where 12-year-old Kyrin Carter was last seen.