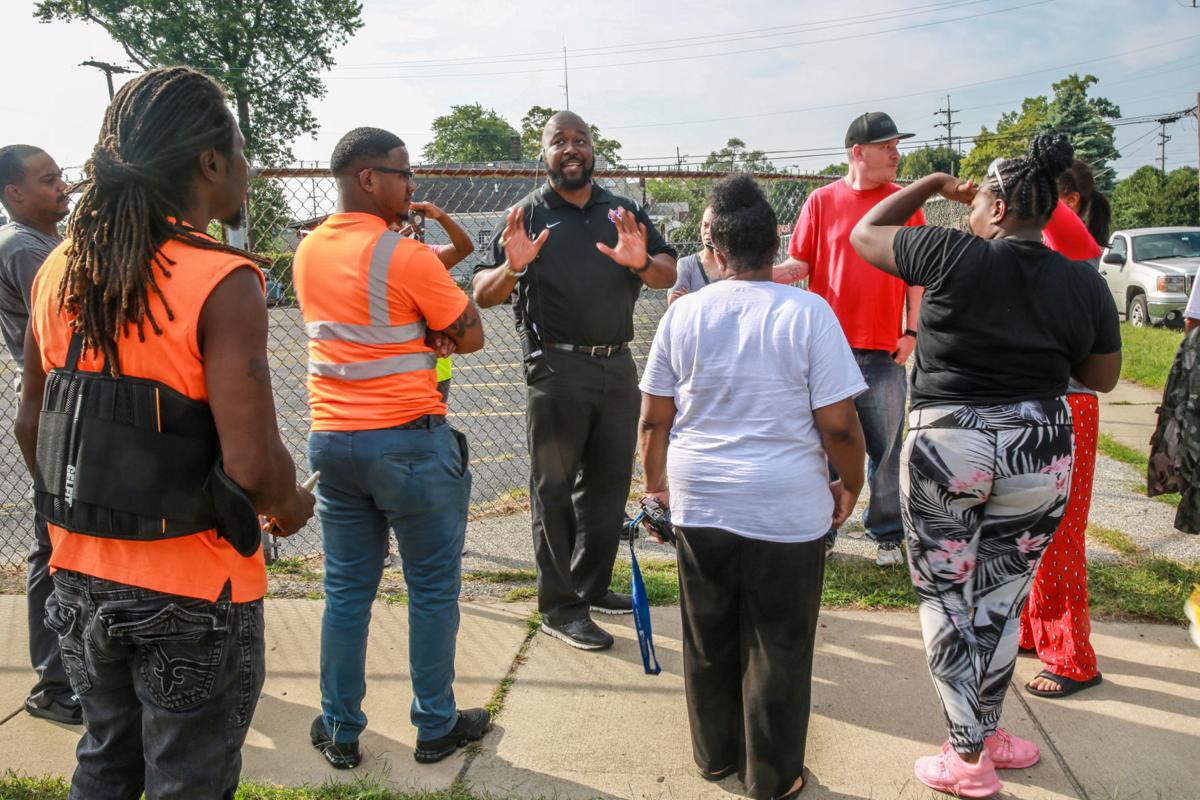 HAMMOND — Nearly 200 students gathered Wednesday in the Hammond Area Career Center auditorium in remembrance of the attack 18 years ago on the World Trade Center.

For the seventh year running, students planned to take time out of their second-period classes to honor the fallen officers of 9/11. Tape lined the career center floors, and the names of first responders marked the ACC stairwell walls.

Just after 9 a.m., the stair climbers began their 1,980-step trek, mirroring the distance of the 110 stories climbed by first responders to the World Trade Center attack. The students and staff wound through the three-story career center, up and down six different flights of stairs — two extra flights added from the year before to accommodate increased participation.

“One day I would like to have 343,” said Bell, the event’s organizer. “That’s the number of firefighters that were there.”

But, just about two laps in to the students’ nine-lap course, the Patriot Day Stair Climb event was cut short.

“Code White!” administrators belted from the front hallway of the school. “Go to your ACC 2 classroom.”

Within minutes, the hallways fell silent. Students scattered to individual classrooms. No one was left in the building’s stairwells, swarming with students just three minutes earlier.

Over the intercom, Principal JoEllen Raby addressed the school.

“The Area Career Center is currently on a Code White,” Raby said. “Immediately close and lock classroom door or work area door. Continue with your regular classroom teaching or other duties within the school.”

Just a half-mile down the road, Hammond police were called to Hammond High School to investigate a threat reported by students through social media.

A series of photos sent to a handful of students, some attending Hammond High, included a photo of a rifle along with threats to “SHOOT HAMMOND HIGH UP @12.”

Lyle Douglas, a junior at Hammond High, said he was one of several students to receive the threat via Facebook Messenger from an anonymous account called Hhs Tea.

The account, inactive over the summer, had been known in the past to spread rumors bullying other students, Douglas said, but it never had been responsible for such a threat.

He and another student in their second-period physics class turned to a teacher, sharing the concerning posts.

When he felt the teacher didn’t take his fears seriously, Douglas said he took to Facebook, posting images of the threats to his own Facebook wall.

Within 30 minutes, he said, the post had been shared more than 100 times.

“We thought it was a practice Code White, but it was taking a long time,” said Jonathan Martinez, a Hammond High freshman who was kept in his second-period piano class. “We didn’t think it was really real, but then we started getting social media reports from outside.”

Hammond administrators said they first became aware of a threat when a female student, also a party to the Facebook Messenger group, reported the threat to the school’s main office.

Superintendent Scott Miller, running in Wednesday’s 9/11 Patriot Day Stair Climb at the Area Career Center, said he was alerted to the situation and responded just after 9 a.m. to Hammond High, where he was able to communicate with Hammond police and, taking their advice, call for a lockdown of all Hammond schools.

Miller said he hadn’t heard reports of any students’ concerns not being taken seriously by a teacher, but that every Hammond staff member has a responsibility to pass safety concerns along to school administrators.

“That’s very concerning to me,” Miller said. “All of our teachers, students and staff have a responsibility to, if they see something, say something.”

The districtwide Code White lockdown — a soft lockdown that allows for teaching within classrooms so long as no one moves about the school — was lifted about 11:30 a.m. after Hammond police had determined the high school safe.

Throughout the two-hour lockdown, front office staff at the Area Career Center took a regular stream of calls from parents — many finding out from social media or their students’ worried texts that a school threat was being investigated.

“Cellphones are our worst enemy,” Raby said, noting the need not to spread panic among the community while authorities worked to resolve the situation. “What people don’t realize is that really hampers the function of the school.”

School officials said they referred to Hammond police throughout the morning for updates and tried to keep the community apprised of the situation using school district Facebook and Twitter channels.

“I don’t know if it was a kid that was trying to make something bad on this day, 9/11, or trying to joke about it,” said mother Virdiana Saldana, as she left the school with her Hammond High freshman son. “It’s not a joke.”

Miller said the line extended beyond the school’s Entrance A into the afternoon, hours after the lockdown had cleared, while Hammond High staff worked to verify identification for guardians as they requested release of their students.

As administrators made progress, Miller said, more parents would arrive to pick up their children. The school city, at one point, provided water for those waiting to retrieve their students.

“We’re educators, we’re not investigators for criminal acts like this,” the superintendent said. “We are going to reflect on the way things went. We will review this and be critical about how we could do better if a situation like this happened again.”

School administrators said they have no evidence to believe the event was inspired by the 9/11 anniversary, though they were on alert.

“All school administrators are hyper-vigilant on 9/11,” Raby said. “We’re well practiced. Safety is our No. 1 priority.”

Raby said she does not believe the number of school lockdowns have increased over the years, but that media awareness of such events is heightened today.

“This is my 23rd year as an educator,” Raby said. “I believe this is only the third time I’ve had to make that call.”

Students were sent home with a letter to parents Wednesday night explaining the nature of the anonymous Facebook threat.

Hammond police are still investigating any possible leads connected to the anonymous Facebook account. Miller said students with any information can contact police or school administrators.

The superintendent said Hammond police have assured administrators it is safe for students to return to school Thursday. An increased security presence is expected in the building for the next few days.

“I’m very proud of the students that did bring this forward,” Miller said. “And, I’m thankful to the parents for being patient as we work through this.” 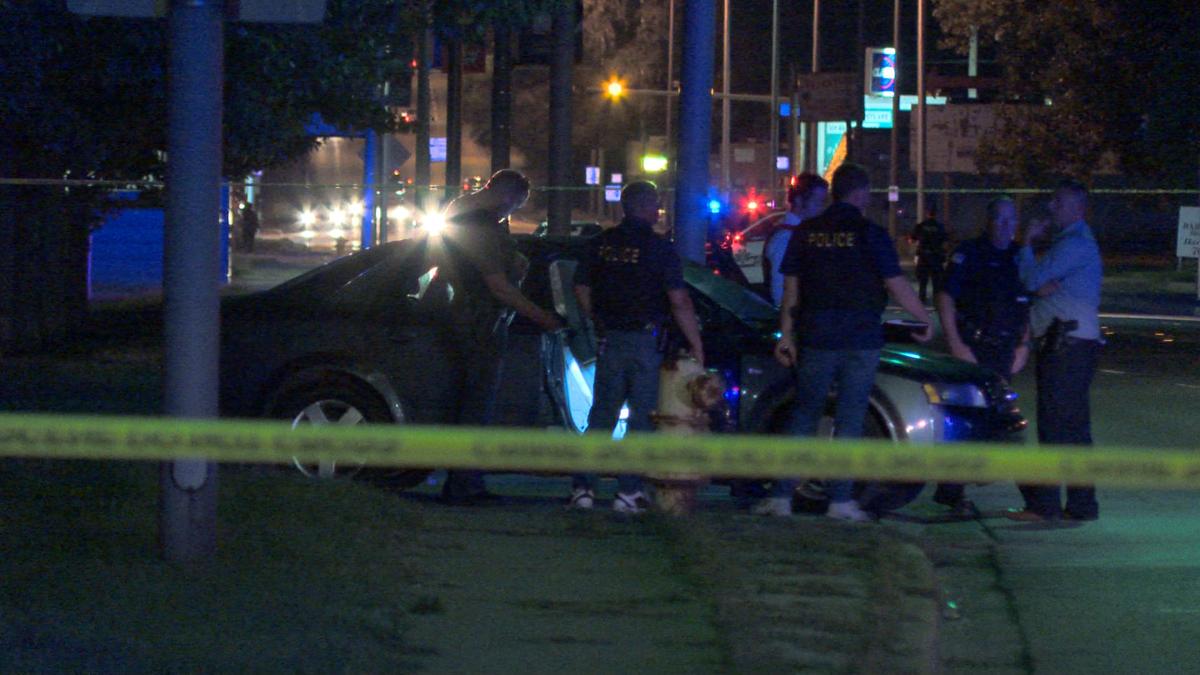 CALUMET CITY — A 23-year-old Burnham man was wounded in a shooting about 6:50 p.m. Monday near Torrence and Harding avenues, police said.

Police shut down several blocks of Torrence Avenue, just north of Sibley Boulevard, after responding to a report of a gunshot victim, according to a news release.

Officers located the man, who had a gunshot wound and was taken to a local trauma center for treatment.

A car with its front doors ajar sat facing east on Harding Avenue, within a cordoned-off crime scene area. Police wrapped crime scene tape around several blocks of Torrence and a grassy area west of the road.

A day care center, which appeared to be closed for the night, stood just outside the crime scene to the east along Torrence. 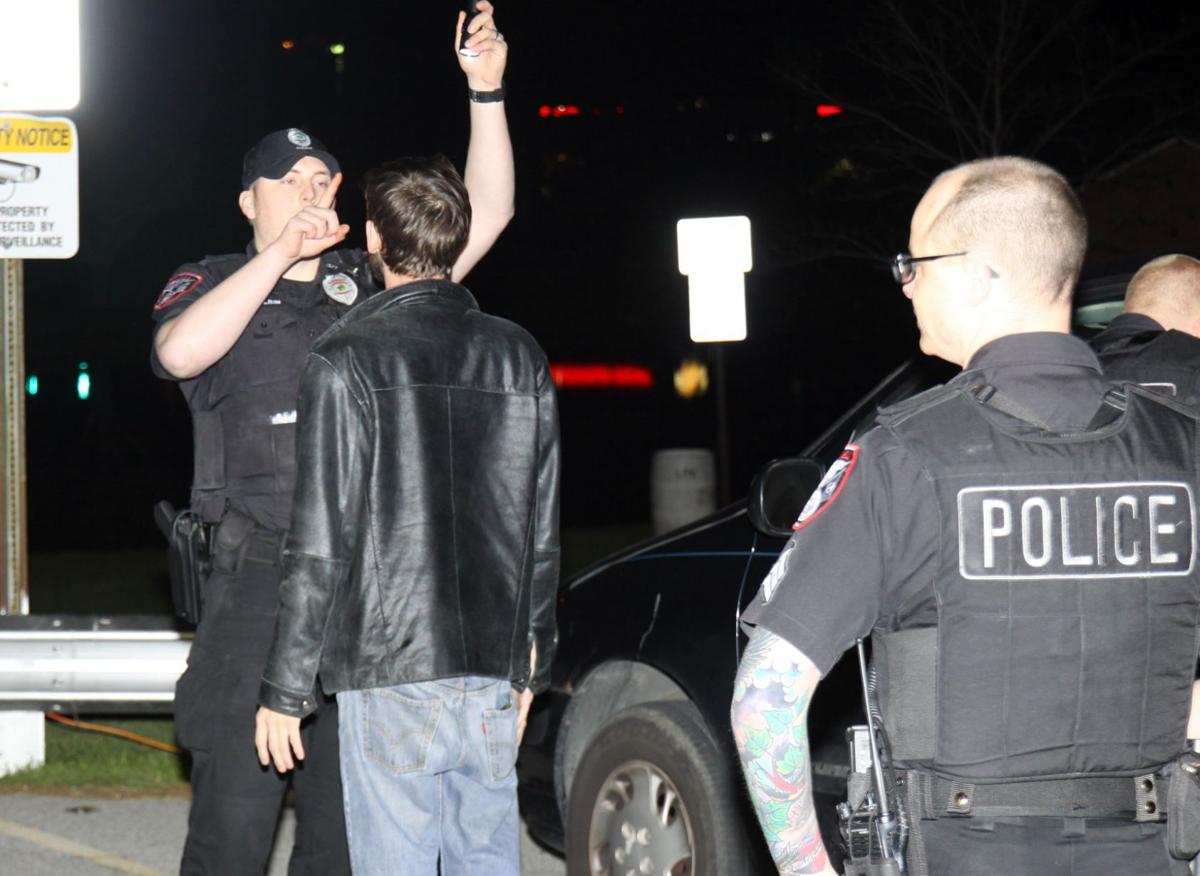 During a 25-day period, the Lake County Traffic Safety Partnership arrested 79 people as part of the national "Drive Sober or Get Pulled Over" campaign.

Another 1,252 drivers were issued a warning or citation, officials said.

The campaign is funded through the National Highway Traffic Safety Administration. The money is then distributed by the Indiana Criminal Justice Institute. Officials said about 230 police agencies throughout the state participated in the "Drive Sober or Get Pulled Over" initiative.

Officials said additional impaired driving patrols during several weekends in August netted another 51 arrests, as well as 895 citations and warnings being issued. 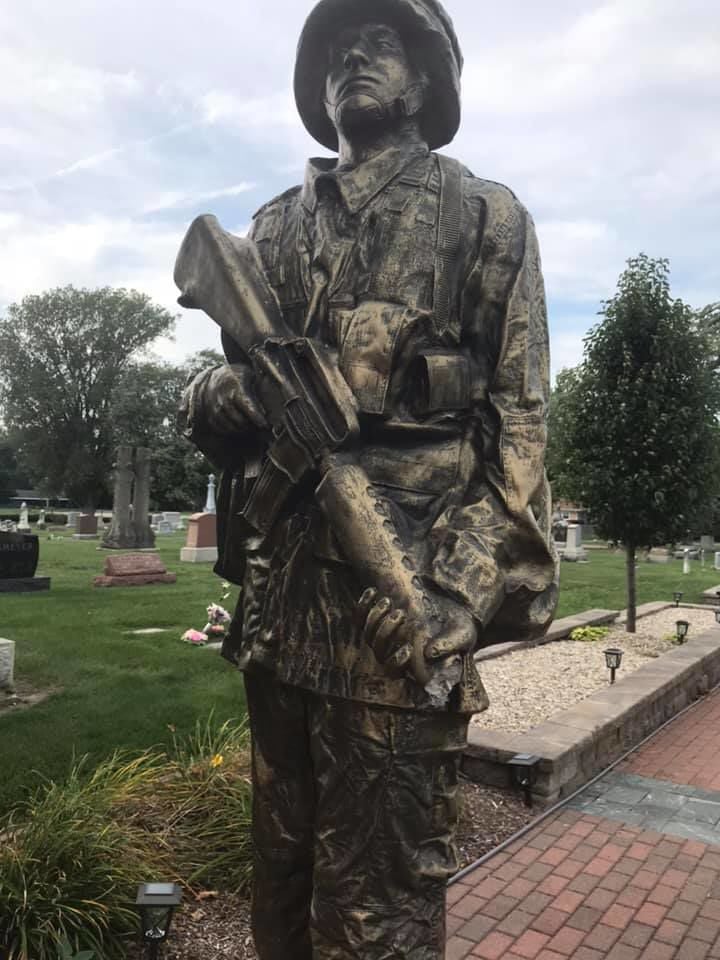 CROWN POINT — While surveying the grounds of the Historic Maplewood Cemetery last week, manager Tom Hawes came across the vandalized statue of a once-solid U.S. soldier honoring those who have served in Iraq.

Part of the bronze man's rifle had been removed. Hawes was immediately taken aback.

"Who would do such a thing?" the 72-year-old said. "It’s a disgrace to do that to a military statue."

Hawes, who reported the incident to police, said the missing portion of statue cannot be recast. So, if that piece isn't found or returned, a new soldier will have to be purchased to replace the one that currently stands in the middle of Veterans Memorial Walkway.

And this isn't the first time the 6-foot soldier has been vandalized.

Hawes said the tip of the rifle was removed about two years ago. A local community member helped him apply a temporary replacement at the time, but now it and a portion of the barrel are missing.

“I know people don’t like guns, but that’s what protects us," Hawes said.

A day or so before Hawes found the vandalized soldier, he came across a broken convenience outlet which is attached to a short light post that illuminates several flag poles. Someone had kicked it. Hawes said it'll cost him $72 to fix.

Since becoming manager of the cemetery in 1996, Hawes said he has seen vandals destroy various items in the cemetery and he remains confused each time.

If the part of the statue isn't returned, Hawes said he plans to organize a fundraiser in order to procure a new one. And if that's the case, he also plans to have it placed higher up to "remove any temptation."

Anyone with information on the missing piece or vandalism at the cemetery is asked call Hawes at 219-663-5581. 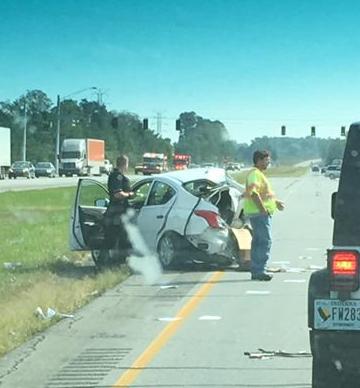 UPDATE: 1 airlifted after crash on Indiana 49

WASHINGTON TWP. — One driver was airlifted to an area hospital after a collision involving three vehicles halted both north and southbound traffic on Indiana 49 near Burlington Beach Road Tuesday.

A box truck, car and semitrailer were all traveling southbound when they collided. It is unclear in what order the vehicles struck each other. An investigation is ongoing, Porter County sheriff's PIO Cpl. Benjamin McFalls said.

One person was flown by Lutheran Air. It is unclear which vehicle the person was in, McFalls said.

Check back on nwi.com for updates as this story develops.