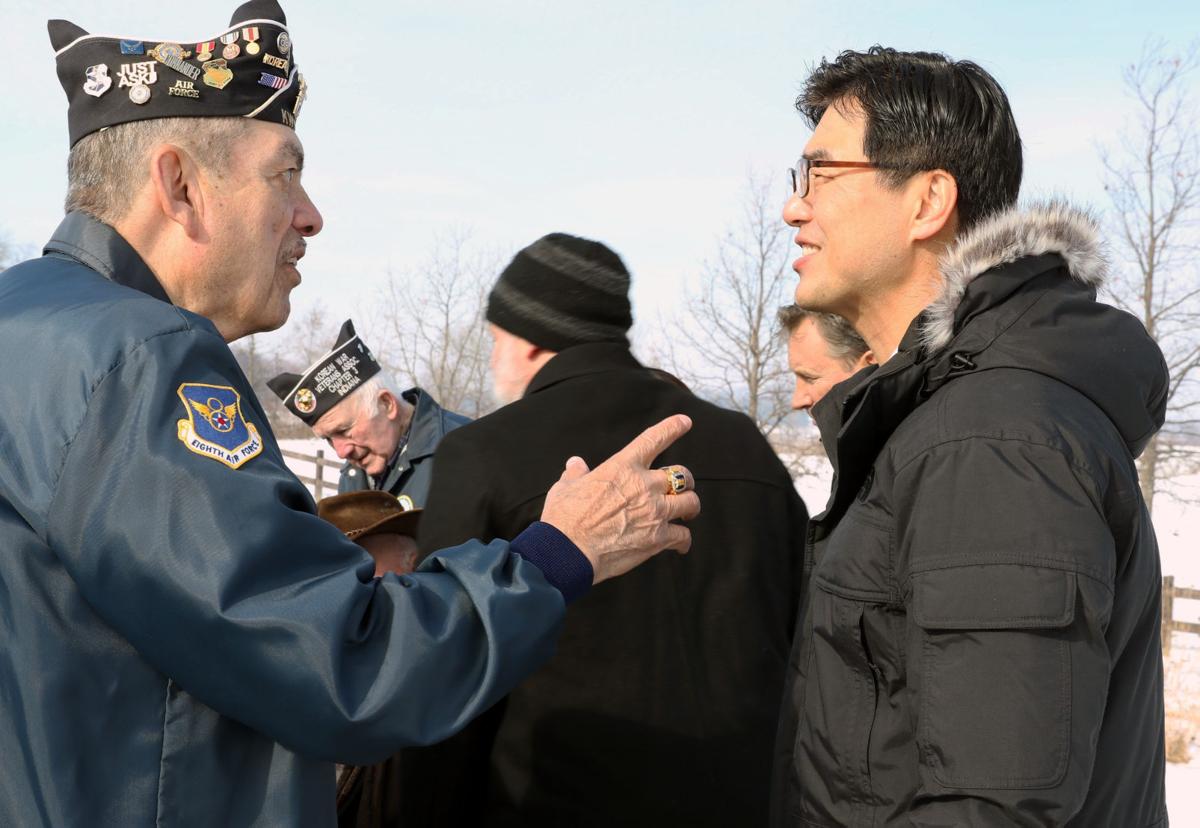 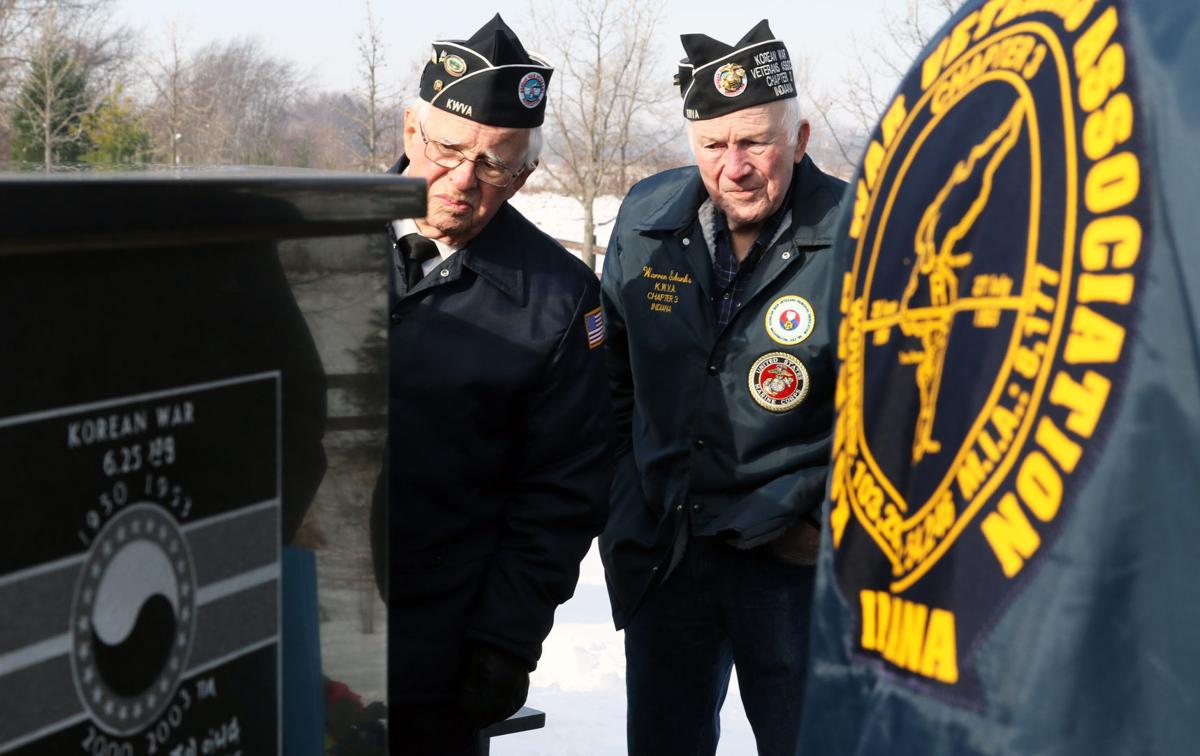 Korean War veterans (from left) Richard Garza and Warren Eubanks spend some time with the monument following the welcoming of the Korean Consulate General's office in Chicago on Tuesday morning at the Lake County Korean Veterans Memorial. 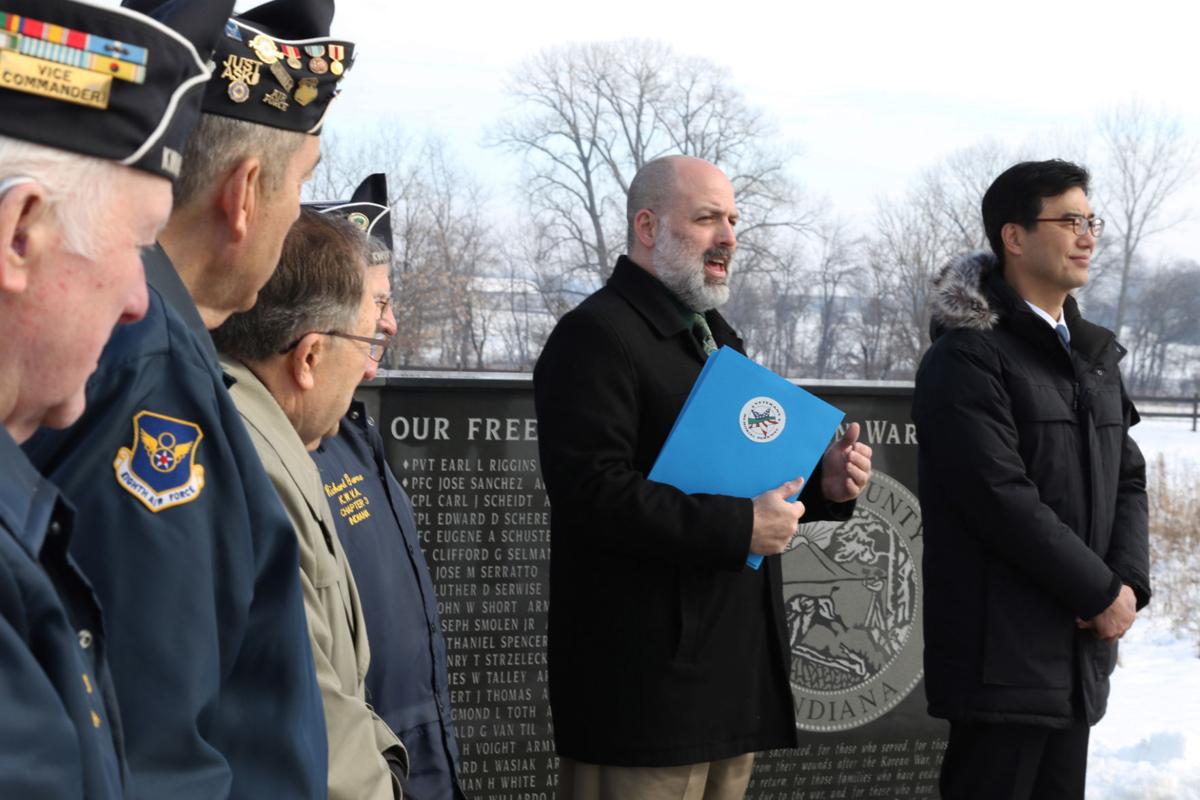 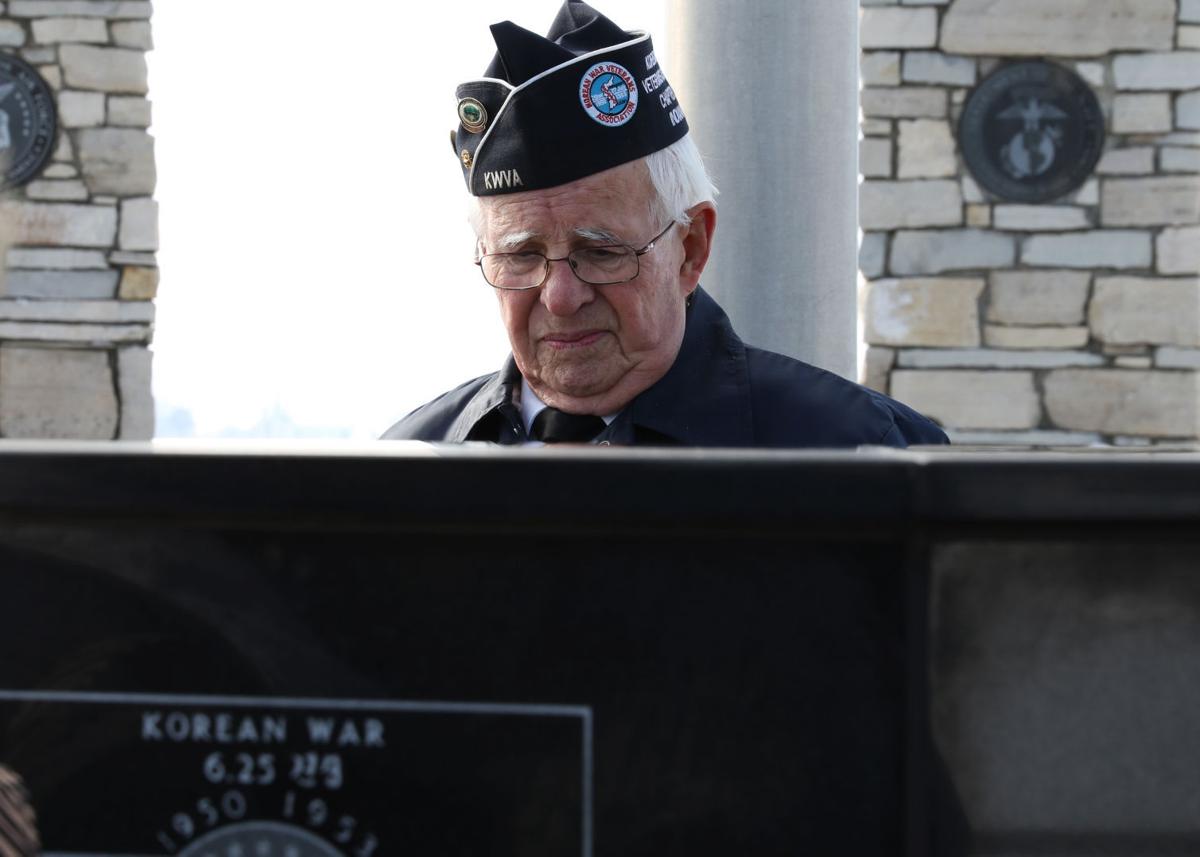 "It is said the Korean War is the 'forgotten war,' but to South Koreans it is not forgotten," Lee told a gathering of Korean War veterans and local officials Tuesday at the memorial just east of Leroy. "Without the sacrifices of the veterans whose names are on this wall and those who are here, I would not be here."

One way South Korea would like to pay back the debt is to pay the cost of correcting the map on the memorial. The map of Korea shows the Sea of Japan between Korea and Japan, but Lee said it has always been known as the East Sea to Koreans.

The sea was renamed by the Japanese a few hundred years ago and efforts to get Japan to agree to change it back have not been successful. Lee said South Korea is more flexible and is willing to accept listing both names, as is being done in many reference books today.

After seeing the memorial, representatives from the Korean consulate contacted the Veterans Memorial Parkway Commission and offered to pay for adding the East Sea name to the wall's map. Tuesday's gathering was to formally announce the plan.

Mitch Barloga, president of the VMPC, said it would be a little like Chicago deciding to rename Lake Michigan as Chicago Lake. For Koreans, the Sea of Japan name is a reminder of many years of onerous rule by the Japanese.

"This is a significant issue," Barloga said. "This helps restore a bit of history that is important to the Korean people. Our intention with the parkway is to build these monuments so the people wouldn't be forgotten. It's important to know why these people died.

"The Korean War is one of the most mysterious conflicts. The South Korean people are very indebted to the soldiers, and they want to make sure (the memorial) is accurate," Barloga said.

Barloga said the correction can be etched onto the existing monument by Prestige Custom Stone Products, of Crown Point, which did the original. He said it isn't known yet what the cost will be. The whole monument cost $15,000, but adding "East Sea" to the map isn't expected to cost much.

"This ceremony was a great way to show our appreciation," Solis said. "I was not aware they would have this kind of ceremony, and I appreciate all the (Korean War veterans) being able to come out."

SEOUL, South Korea — An apology from Japan's prime minister and a pledge of more than $8 million sealed a breakthrough deal Monday in a decade…

CROWN POINT — A memorial to those from Lake County who fought and the more than 1,200 from the county who died in the two world wars is being …

CROWN POINT | Supporters of a World War memorial are asking Lake County officials for a $100,000 donation to help make their plans a reality.

Korean War veterans (from left) Richard Garza and Warren Eubanks spend some time with the monument following the welcoming of the Korean Consulate General's office in Chicago on Tuesday morning at the Lake County Korean Veterans Memorial.