Shedding light on wrongful convictions
Share this
{{featured_button_text}}
1 of 3

Wrongful Convictions: “Righting a Wrong,” a forum organized by Purdue University Northwest Department of Benavioral Sciences and addressing how an innocent person may be wrongfully convicted, took place on Wednesday at the Center for Visual & Performing Arts in Munster. Speakers included exonerees and experts from After Innocence, The Innocence Project, Lake County Prosecutor Bernard Carter, and others. 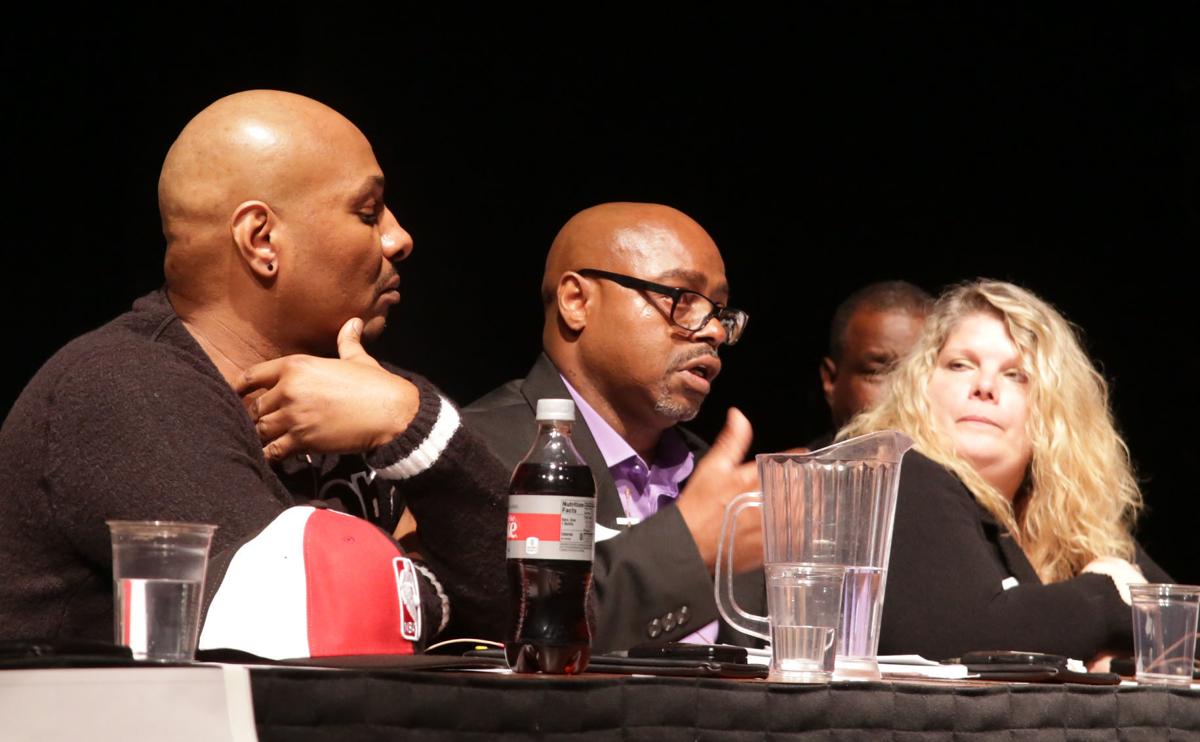 Exonerees Willie Timmy Donald, from left, Roosevelt Glenn and Kristine Bunch discuss their wrongful convictions and their paths to freedom during a forum discussion. 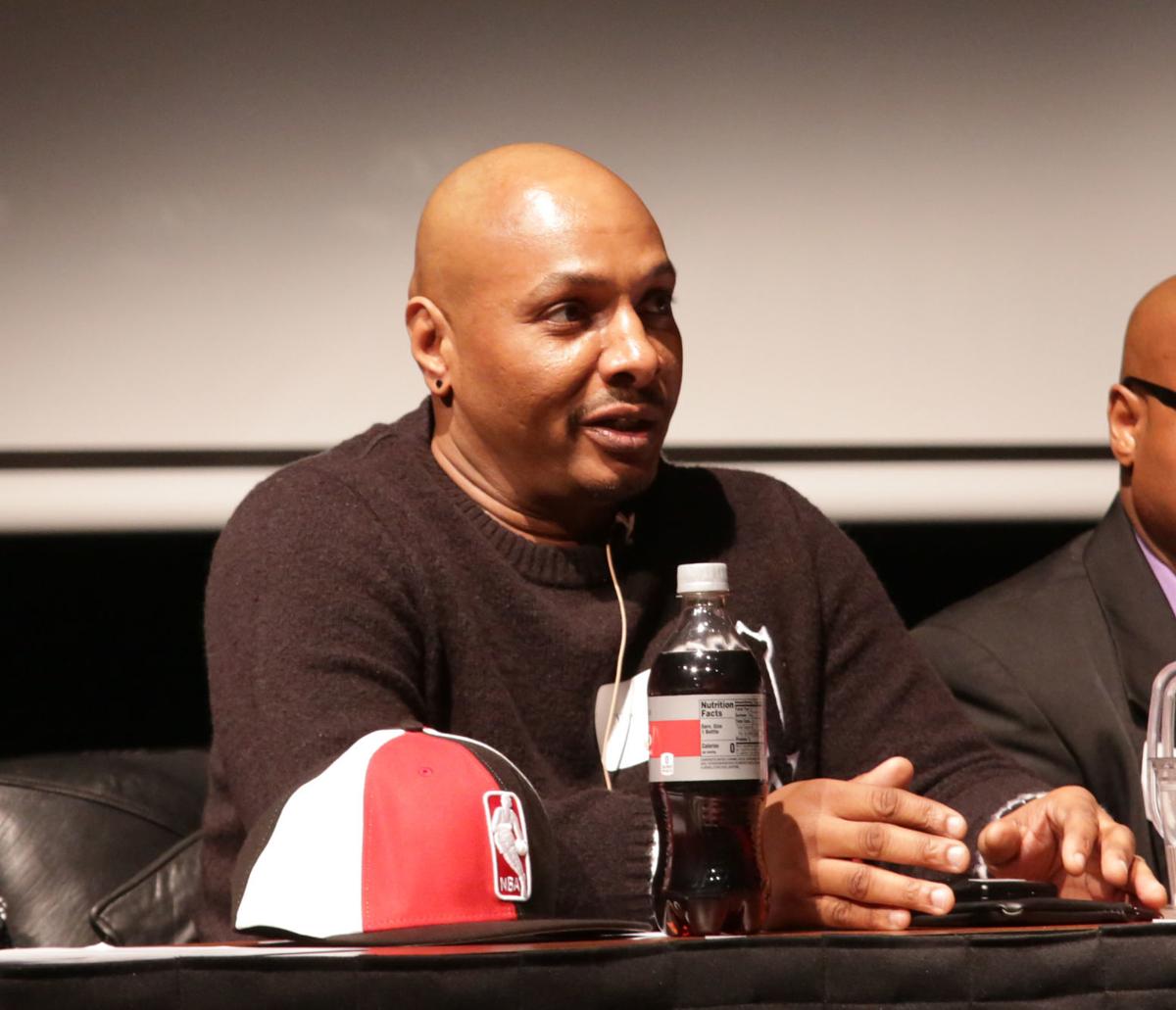 Willie Timmy Donald talks about serving nearly 24 years for crimes he did not commit during the forum Wrongful Convictions: “Righting a Wrong."

MUNSTER – Three individuals who spent more than 58 years of their lives in prison for crimes they didn’t commit shed light on wrongful convictions at a forum Wednesday, providing a vivid picture of what they lost during those years of incarceration.

Sponsored by the Purdue University Northwest Department of Behavioral Sciences, the “Righting A Wrong” panel discussion at the Center for Visual & Performing Arts theater brought together exonerees as well as lawyers, advocates for innocence projects, university personnel and Lake County Prosecutor Bernard A. Carter to discuss the current justice system and changes that need to be made.

During the afternoon session, audience members heard the stories of Kristine Bunch, who spent more than 17 years behind bars in Indiana after being wrongly convicted of setting a fire that claimed the life of her three-year old son in 1995; Willlie “Timmy” Donald of Gary who was arrested and convicted of robbery and the murder of a 30-year old man in 1992, serving 24 years of his 60-year sentence before being exonerated; and Roosevelt Glenn, who received a 36-year prison sentence for a rape that occurred in Hammond as part of the “bump and rob” cases in 1989, and was exonerated after being incarcerated for 17 years.

In addition to the exonerees’ experiences, major messages came from the forum — Indiana has zero compensation for someone wrongfully convicted; convictions stay on the individuals’ records despite being exonerated and that there are innocent people still in prison.

America’s justice system is “complicated. It’s a messy system that can be improved, but it’s messy,” said Jon Eldan, an attorney from Oakland, California, and founder of After Innocence, a non-profit that provides re-entry assistance and advocacy for exonerees nationwide.

“They have to go back to the slow system,” said Fran Watson, a faculty member at Indiana University’s McKinney School of Law about the fact that Indiana has no compensation for wrongful convictions. “They have to re-live the experience. Lawyers are slow. The system is slow. It’s OK to execute the innocent as long as it’s someone who had their constitutional rights upheld.”

The system won’t change without legislation, said Nicky Ali Jackson, coordinator and associate professor of criminal justice at PNW, and Beth Powers, a state policy advocate for The Innocence Project.

HEARING FROM THE EXONEREES

“In 1995, I was a single mom going to school and work, raising my three-year old son while living with her mother in Hammond,” Christine Bunch told attendees.

While the family slept, the house caught on fire.

“The pillows and blanket melted in my hands,” Bunch said recalling the intensity of the fire. Once outside, she threw a tricycle through her son’s bedroom window, thinking she could rescue him. However, that action fed the flames with oxygen, Bunch said.

Although she told firefighters she hoped her son would be alive, he was already dead.

“Police officers were there to interrogate me. They determined that the fire was arson,” Bunch said, adding the officers asked her for a list of family and friends who might have issues with her.

The day after her son’s funeral, Bunch was given a polygraph, which officials said she didn’t pass.

“They asked me questions from behind me and startled me. I was shaking,” she said about the polygraph.

“Nobody can find that polygraph now,” she said. “I went to jail and waited. I was granted bond...In the midst of that I got pregnant.”

At her trial, an AFT (Alcohol, Firearms & Tobacco) chemist presented evidence that a highly-flammable substance was found in the home. She was convicted and sentenced to 50-years for arson and 60-years for murder which were to run concurrently.

After writing to every innocence project, Northwestern University’s Medill Innocence Project became interested in her case.

It took new arson science to finally determine in 2007 that there were three faint traces of kerosene in the floor of the living room dating back to the former home owner.

“I didn’t walk out the door (of prison) until 2012,” said Bunch, who is executive director of JustIS 4 JustUS, an exoneree support organization she founded.

Roosevelt Glenn was a forklift driver at an area steel mill in 1989 when his nightmare began. Green coveralls like those steelworkers wore were found at the scene of a rape in Hammond that police said was part of a series of “bump and rob” cases committed by five black men.

During early December, Glenn and fellow steel workers became stuck in the sub-zero cold on I-80/94. While a friend came to their rescue, the car’s owner stayed behind. When Glenn and the others returned after cashing their checks and getting gas, the car’s owner said a car window had been broken by police to retrieve green coveralls.

On Jan. 22, 1990, Glenn said he was called to a safety meeting at the mill and arrested along with four others by Hammond police. He spent four months in the Lake County Jail charged with rape. Although released when no scientific evidence connected him to the crime, Glenn said he was ordered to return to court because he allegedly “talked to two jailhouse snitches and confessed.”

His first trial resulted in a hung jury, but Glenn was convicted at the second trial.

When he was finally released from prison, Glenn had to register as a violent sex offender.

“Me and my family, we’ve been through hell. It was not fair,” Glenn said through tears. “It’s hard to be sitting up here reliving this. The state took away my retirement, my pension.”

As a teenager in 1987, Willie “Timmy” Donald went for a ride in a car that was reported stolen. Police fingerprinted him and took his photo after a traffic stop.

In 1992, there were six armed robberies in Gary’s Glen Park neighborhood, one of which ended in the murder of 30-year old Bernard Jimenez who was gunned down when he fought back.

Donald was arrested for the robbery and murder. His photo from 1987 was part of a photo array presented to two women who said they witnessed the crime.

He was convicted and sentenced to 60 years in prison.

“About 2007, I developed a sleeping disorder and watched a lot of TV. I saw a program about the Innocence Project. I began writing to Northwestern and sent them info. They visited me in Michigan City in 2007,” Donald told the audience.

One piece of evidence was a jacket the victim was wearing that contained hairs from the perpetrator. Innocence Project representatives asked Donald for his DNA. There was no match to Donald.

Donald’s release in January 2016 occurred after the one of the original eyewitnesses came forward to say she really wasn’t certain Donald was the perpetrator. Attorney Thomas Vanes, who worked as a prosecutor for 13 years prior to practicing criminal defense law, helped Donald achieve his release.

Hoosiers exonerated of crimes may get $50,000 for every year they wrongly spent in prison

Roosevelt Glenn wants to ensure no one again has to endure the experiences he's lived through as an innocent man who served nearly two decades behind bars for a crime he didn't commit.

Wrongful Convictions: “Righting a Wrong,” a forum organized by Purdue University Northwest Department of Benavioral Sciences and addressing how an innocent person may be wrongfully convicted, took place on Wednesday at the Center for Visual & Performing Arts in Munster. Speakers included exonerees and experts from After Innocence, The Innocence Project, Lake County Prosecutor Bernard Carter, and others.

Exonerees Willie Timmy Donald, from left, Roosevelt Glenn and Kristine Bunch discuss their wrongful convictions and their paths to freedom during a forum discussion.

Willie Timmy Donald talks about serving nearly 24 years for crimes he did not commit during the forum Wrongful Convictions: “Righting a Wrong."