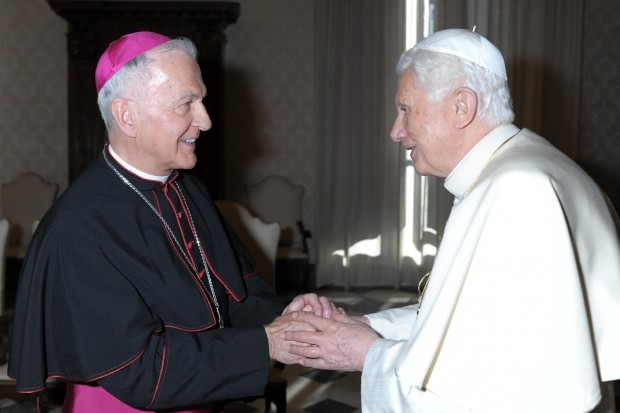 Bishop Dale J. Melczek meets with Pope Benedict XVI in Rome during his quinquennial ad limina visit in February 2012. Melczek said he was surprised to hear Monday's news that the pope will resign Feb. 28.(Photo provided by Diocese of Gary) 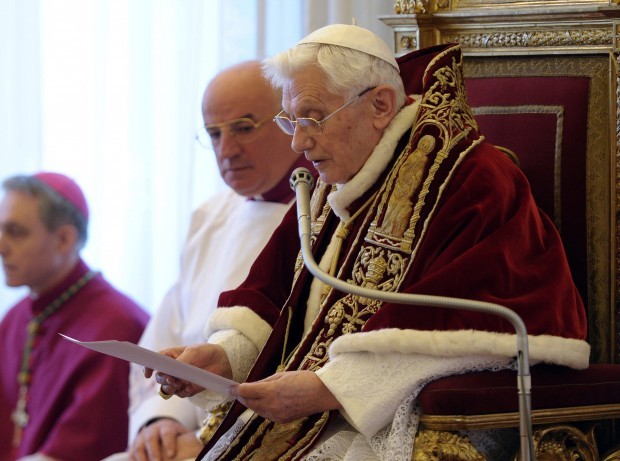 In this photo provided Monday by the Vatican newspaper L'Osservatore Romano, Pope Benedict XVI reads a document in Latin where he announces his resignation during a meeting of Vatican cardinals at the Vatican. 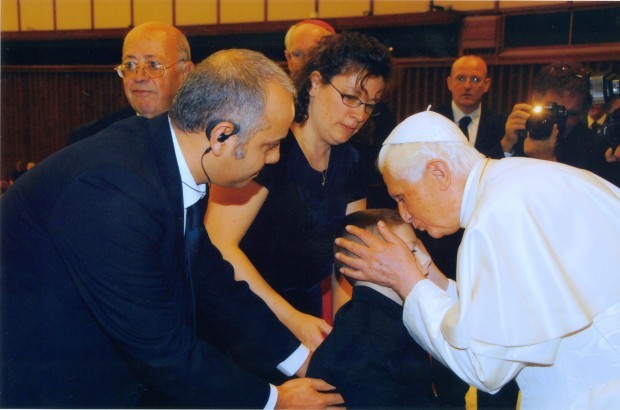 In this 2009 photo, Pope Benedict XVI kisses the forehead of then-9-year-old Andrew Birlson, of St. John, as his mother Theresa Birlson, looks on. Andrew's visit with the pope was made possible through the Make-A-Wish Foundation. Seven months later, Andrew underwent a liver transplant and is in good health. 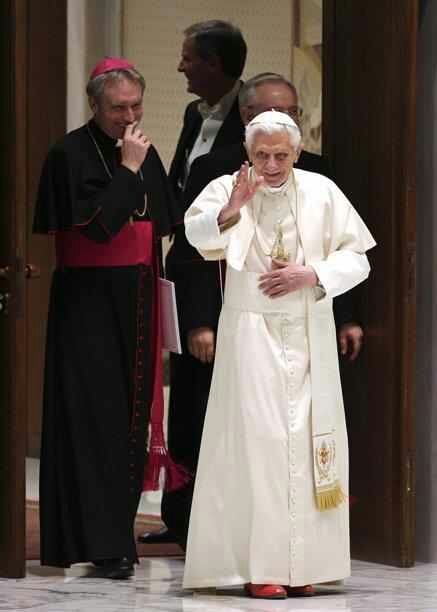 Region residents with ties to Pope Benedict XVI, surprised by the Monday announcement he will resign Feb. 28, shared stories Monday of their encounters with the pontiff.

Canon law, which regulates the government of the Catholic Church, allows popes to resign. However, a pope has not resigned in nearly 600 years, Diocese of Gary Bishop Dale Melczek said.

"I think the pope surprised everybody, except maybe his most intimate adviser," he said.

Melczek said he admires the pope for acknowledging that Jesus is the universal shepherd of the church and he is just an instrument in the hands of the Lord, chosen as a successor to St. Peter. Melczek last met with the pope a year ago in the pope's study.

"The pope is certainly one of the greatest intellectuals and most renowned intellectuals of our time," Melczek said. "However, he puts you at ease by his simplicity and his humility and inner sense of joy and peace. He invites you to hold his hands, and he looks right in your eyes and he smiles, and he just wants to hear what are the struggles, what are our challenges here in Northwest Indiana," Melczek said.

In the days leading to the election of a new pope, the cardinals will discuss the needs and challenges of the church today and who can best lead it, Melczek said.

"I think one of the great needs of our time is to reach out to those that once practiced the faith but no longer do so," Melczek said. "One of the great challenges is the secularism of our time, the extreme individualism of our time. We don't have that sense for doing things that builds community."

Deacon Michael Halas, assigned to St. James the Less in Highland and works as a chaplain at St. Catherine Hospital in East Chicago, sat in the fourth row at a papal audience less than a month ago. A third year graduate student at Catholic Theological Union in Chicago, Halas was in Rome from Jan. 11 through 28, taking a course in art, architecture and history toward a master's degree in liturgy.

"He had a twinkle in his eye when he came out and we all saw him," Halas said. "We were overly excited to see him, and you could tell he was happy to see us. It's a life-changing event to be in the presence of the Vicar of Christ."

The pope walked out, waving his hands and spoke in various languages.

"He didn't sound like there was anything wrong," he said.

Halas was startled to hear news of the pope's resignation.

"It saddens me that he's resigning," he said.

The Rev. Benjamin Ross, associate pastor at St. Thomas More in Munster, celebrated Midnight Mass with the pope during Christmas 2011. He was a deacon at the time, one of four tapped to serve alongside Pope Benedict XVI.

Ross was in a study abroad program in Rome. Msgr. Guido Marini, the papal emcee, suggested Ross serve for the pope. Ross figured he would be assigned to a less visible prayer service or Mass.

"Little did I know what God had in store for me — that I would be serving one of the biggest liturgies of the year," he said.

During the liturgy, Ross felt a spiritual energy coming from the pope.

"I could just tell how prayerful the Holy Father was in celebrating Mass," he said.

"It's virtually unprecedented in the church that the pope resigns," he said. "I think everyone is surprised, but there must be a serious reason."

North Hammond native and Bishop Noll alumna Heidi Agostini and her husband visited the Vatican last year, and it changed her life.

"On Wednesdays at the Vatican, the pope holds his weekly audience, so we got two tickets to that," she said. "It was the most amazing thing I've ever been through. We sat in the audience and out comes the pope in his popemobile, and the crowd roars with applause and cheers. It was louder than it was at a Chicago Bears game."

Agostini, who is stationed at Camp Pendleton in California, was sad to hear of the pope's resignation.

"Although I'm saddened, I appreciate that he is bowing down because of illness, because he wants to make sure his people are cared for properly."

Theresa Birlson, of St. John, met Pope Benedict in 2009 with her son Andrew, who was 9 at the time. Andrew suffers from a rare metabolic genetic condition and connected with the Make-A-Wish Foundation. His wish was to meet the pope. The morning of the audience with the pope, Andrew got sick. He soldiered through. The pope blessed him and kissed his forehead.

"It was maybe 15, 20 seconds we were there," she said. "He presented us both with a special rosary that has his papal crest on it."

She felt a sense of true goodness.

"I could really feel like it was a connection with heaven," she said. "It was beyond goosebumps."

Former State Rep. Dan Dumezich experienced Midnight Mass at the Vatican with his family several years ago. They were surprised to be seated a few rows away from the side of the altar.

"It was an unbelievable experience," he said. "You actually feel you're closer to heaven. At least, I did."

News of the pope's resignation shocked many Catholics, but Dumezich remembers the pope once saying he would have an obligation to resign if his health left him incapable of leading the church.

"The very first thing I thought of (Monday) was he must have a significant ailment," Dumezich said.

Dumezich praised the pope for setting the Catholic church on a course of conservatism.

"I think that he has alienated some progressives, but he's trying to bring the church back to its roots," he said.

Hammond firefighters battled a massive structure fire Sunday morning at the former law office of of William "Bill" Enslen, a prominent region attorney who was killed at his Hobart home earlier this year.

Gary has had 8,487 cases total and 412 new cases in the month of November alone.

"We believe that there is an appetite for kids and families to be able to have a place to stay healthy and active."

Anyone with information on his whereabouts is asked to contact the Dyer Police Department at 219-660-0000 or call 911.

Plans for an modern business park in the southeast corner of Interstate 65 and U.S. 231 are moving forward.

Peteyville in Hammond's Hessville neighborhood went dark last year because of the pandemic, but it's back this holiday season.

The city contracts out to provide illuminated floats that Harbin said give the parade a "Disney-esque" flavor.

The selection of a new Lake Superior Court judge is likely to continue without interruption after a lawsuit challenging the appointment process was revised to no longer apply to the current vacancy.

A 120 unit development in St. John has been deemed too dense, by the plan commission.

Bishop Dale J. Melczek meets with Pope Benedict XVI in Rome during his quinquennial ad limina visit in February 2012. Melczek said he was surprised to hear Monday's news that the pope will resign Feb. 28.(Photo provided by Diocese of Gary)

In this photo provided Monday by the Vatican newspaper L'Osservatore Romano, Pope Benedict XVI reads a document in Latin where he announces his resignation during a meeting of Vatican cardinals at the Vatican.

In this 2009 photo, Pope Benedict XVI kisses the forehead of then-9-year-old Andrew Birlson, of St. John, as his mother Theresa Birlson, looks on. Andrew's visit with the pope was made possible through the Make-A-Wish Foundation. Seven months later, Andrew underwent a liver transplant and is in good health.