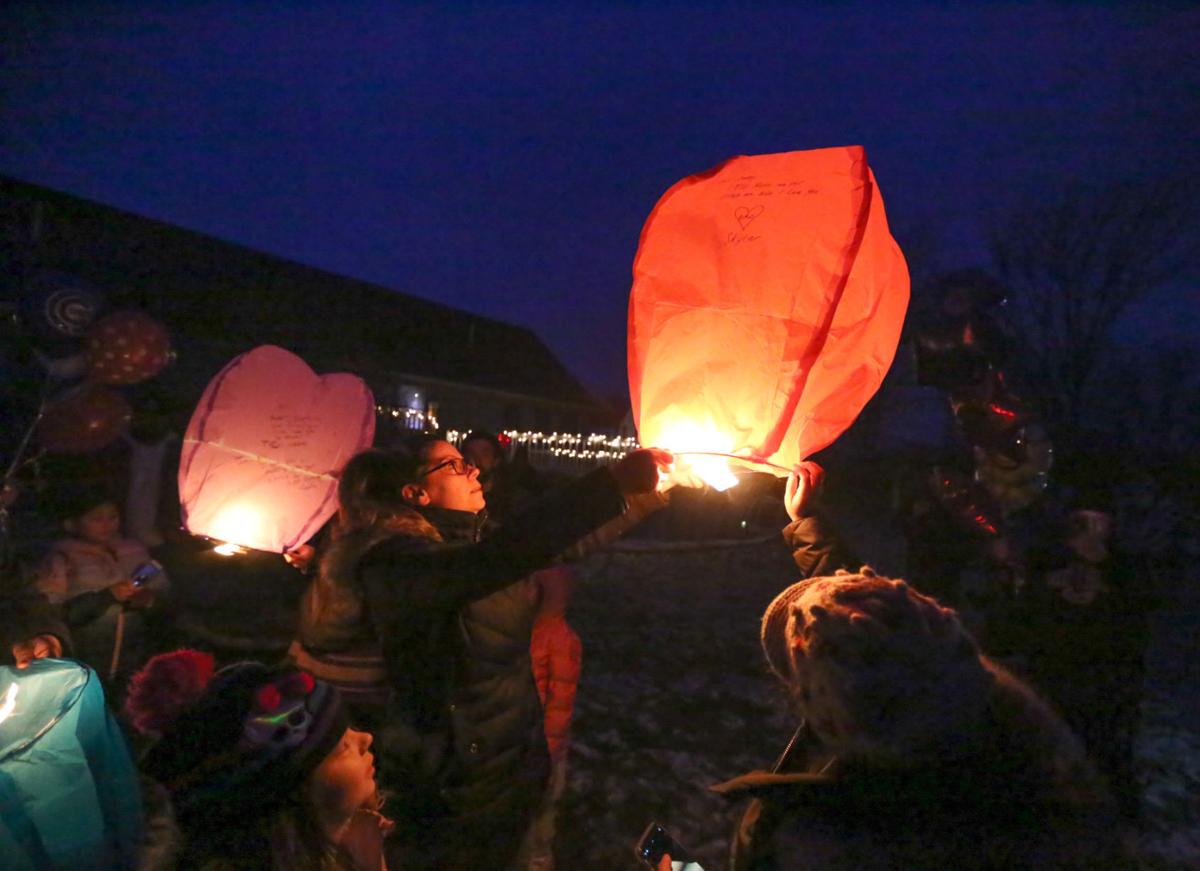 Jessika Lile holds a lantern bearing notes from her and her daughter, Skylar, 7, lower left, Saturday night. They joined friends and family to honor her late husband, Nicholas Lile, who was Lake County’s first homicide victim of 2021. 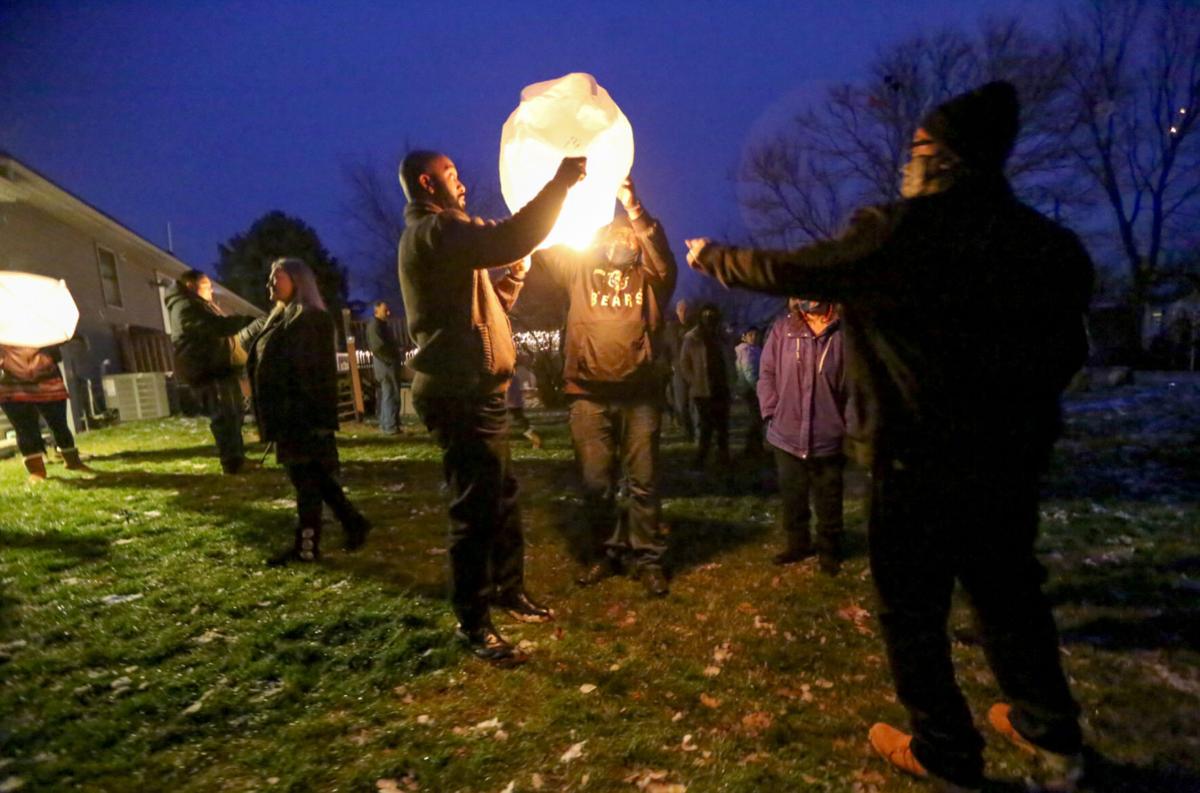 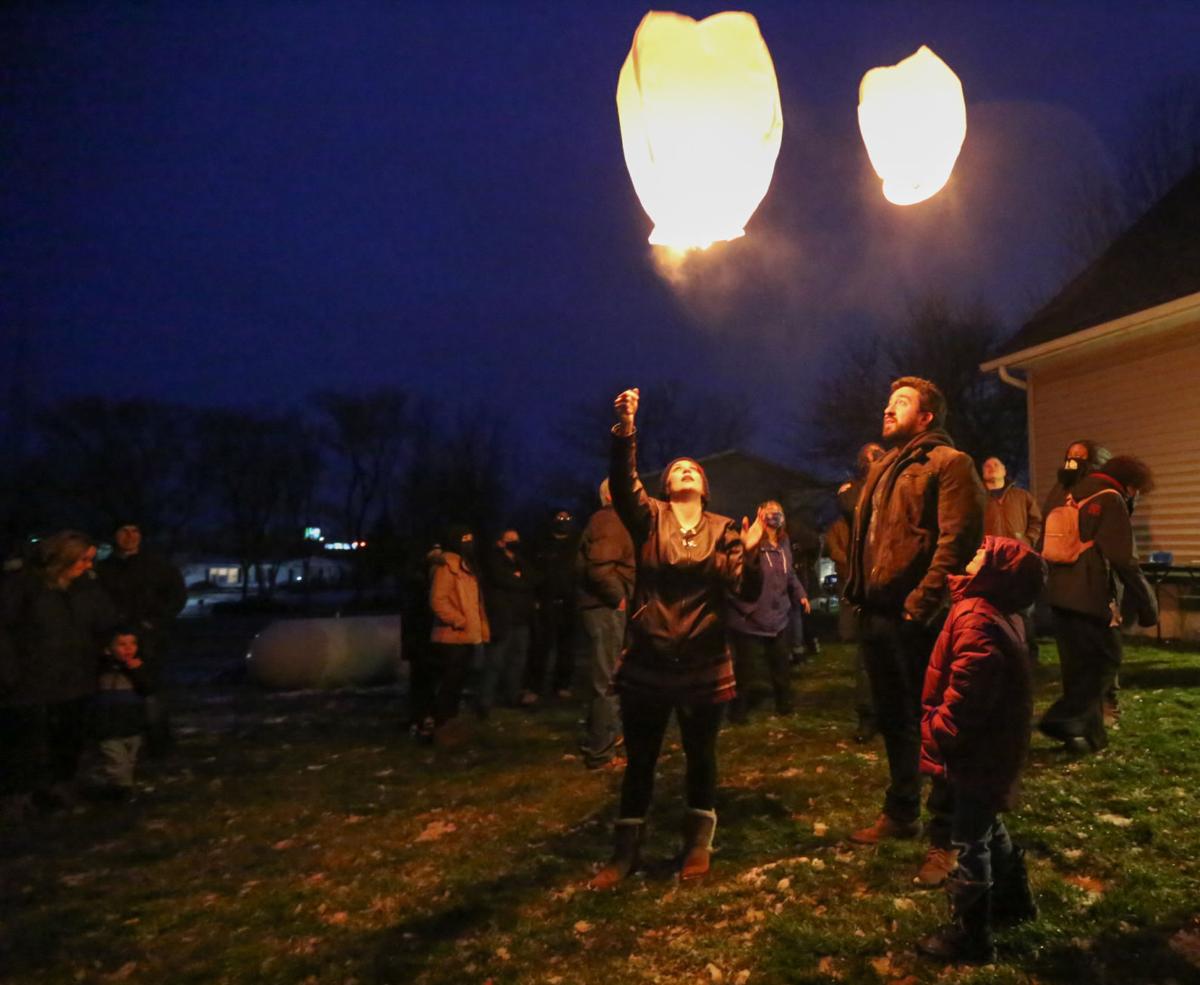 Lanterns were released to remember Nicholas Lile, who was fatally shot in his home earlier this month. 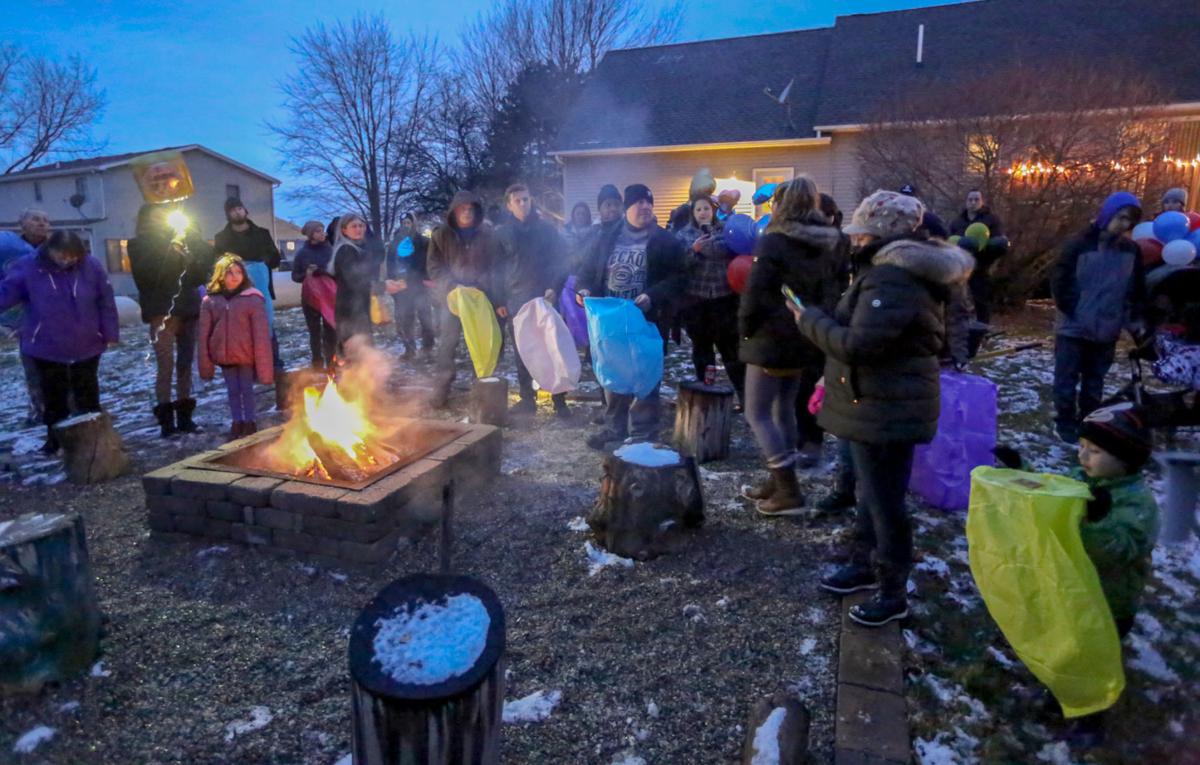 Family and friends gathered Saturday night around a bonfire at the home of the Lile family in Lowell. 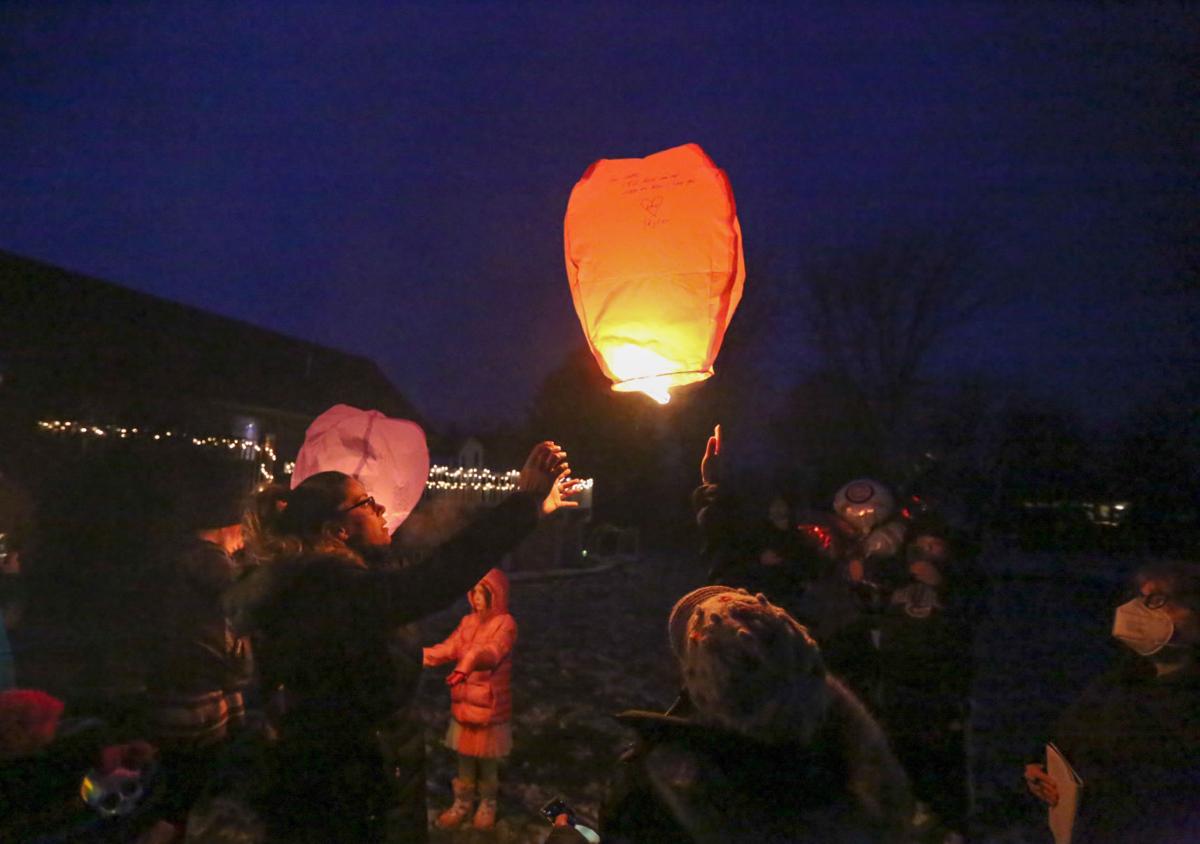 Loved ones of Nicholas Lile wrote notes and attached them to lanterns to release during a memorial.

LOWELL — Friends and family gathered to celebrate what would have been Nicholas "Doc" Lile's 43rd birthday this weekend.

It was almost two weeks after the Navy veteran was shot and killed in his Lowell home.

On Saturday, his street was lined with American flags and dozens of illuminated lanterns were released into the cold night sky at sundown.

"It's been so nice to have everyone come out and share their memories and how much they loved Nick," his wife, Jessika Lile, said. "He touched so many lives. He was a treasure to so many."

Nicholas Lile survived seven deployments to war zones in the Middle East as a U.S. Navy corpsman attached to a Marines battalion. He spent 22 years in the U.S. Navy, with more than 10 years on active duty and the remainder as a reservist.

As some guests struggled to get the lanterns into the air and balloons snagged on trees, Jessika Lile smiled at the thought of her husband's likely reaction.

"We hit a few snags, it's safe to say Nick had something to do with it," she said. "He would have laughed."

On Jan. 3 Nicholas Lile was killed by an off-duty U.S. Department of Veterans Affairs officer he'd invited to his home, according to Lake Criminal Court records. His death marked the first homicide in Lake County this year.

"We are doing as well as we can be," Jessika Lile said. "We are devastated. Our worlds has been turned upside down more than anything."

Jessika Lile has had her eye on Nicholas Lile since she was 12 years old and he would sneak into her apartment complex's pool at age 13. During adulthood, their paths crossed romantically at intervals until the two married, combining their families and then having a daughter together.

"I would be there looking at him because even at 13-years-old, I thought he was the most adorable," Jessika Lile said. "I knew from the moment I met him he would be a significant person in my life. ... He was my soul mate."

Robert Smith, of Gary, became friends with Nicholas Lile when they worked together at Gary Railway Co., where they formed a second family among coworkers. He described Nicholas Lile as a jokester and a “one-upper,” as his friends laughingly called him.

“I think we would all say the same thing,” Smith said. “He was a very strong-willed man and we are going to miss him. Things are going to be a whole lot different without him, that’s for sure. But we are still family. If his wife or kids need anything, we will be here for them.”

While the Lowell home became the scene of a tragic shooting, it also holds many happy memories for his loved ones. It served as a gathering spot for his friends, whether sharing beers around a bonfire or playing pool in his basement. Joe Novoa, of Valparaiso, said his last memory with Nicholas Lile was when he invited Novoa and other friends to his house a few weeks ago.

"We had some beers and listened to music," Novoa said. "It's kind of crazy, because we were talking about what song you'd want to hear if you were about to pass away. I said mine was a Metallica song, and he laughed. I never got to hear what his song was. ... He invited me to come over the weekend he passed away and I didn't go. I regret that."

Novoa had served with Nicholas Lile in the military since 2014, and the two sparked a friendship while training in Chicago.

"He was like a big brother to me," Novoa said. "He was just an all-around good guy."

Now Novoa, like many others, is left with the sadness of loss and anger.

"When I found out, I bawled like a little kid," Novoa said. "I hadn't cried like that in years. I couldn't believe it. And then feeling angry because it's not fair. He had a lot more life left to live with his wife and his kids."

Timothy R. Thomas, 40, of Highland, was charged with voluntary manslaughter, a level 2 felony, in the shooting death of Nicholas Lile. Thomas was released Jan. 5 after posting a $5,000 cash bond, records show.

“I was dumbfounded,” Jessika Lile said. “That we live in a world where you can kill someone in their own home and then walk out of jail three days later.”

The family is planning a memorial later in the year during warmer weather to host a memorial at Beverly Shores beach to bring further closure.

“We want to do a celebration at the beach because that was one of his favorite places to be,” Jessika Lile said.

A fundraiser to benefit Lile's wife and daughter can be found by searching "Nic Lile Memorial Fund" at GoFundMe.com.

Jessika Lile holds a lantern bearing notes from her and her daughter, Skylar, 7, lower left, Saturday night. They joined friends and family to honor her late husband, Nicholas Lile, who was Lake County’s first homicide victim of 2021.

Lanterns were released to remember Nicholas Lile, who was fatally shot in his home earlier this month.

Family and friends gathered Saturday night around a bonfire at the home of the Lile family in Lowell.

Loved ones of Nicholas Lile wrote notes and attached them to lanterns to release during a memorial.