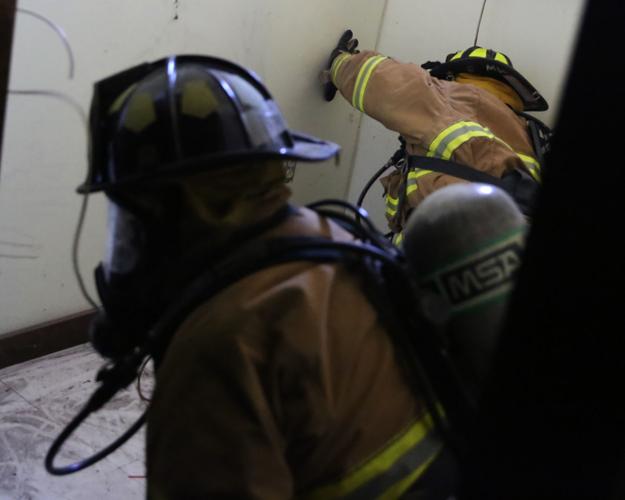 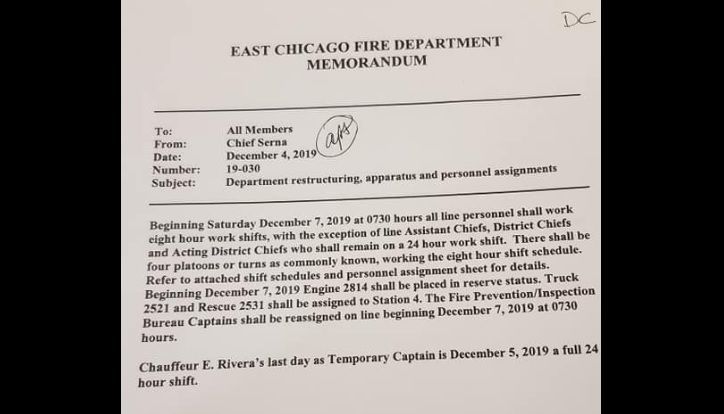 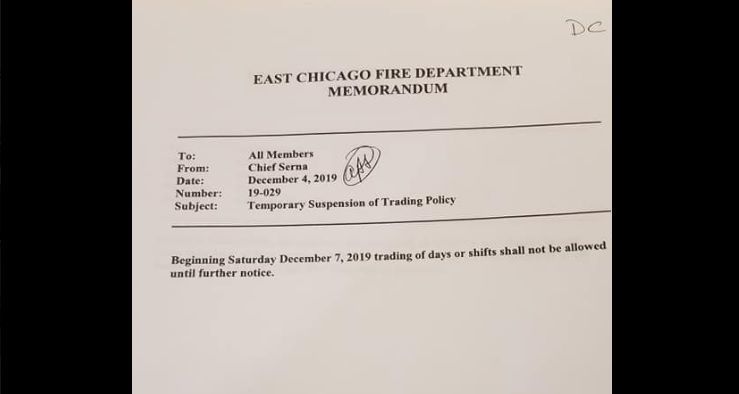 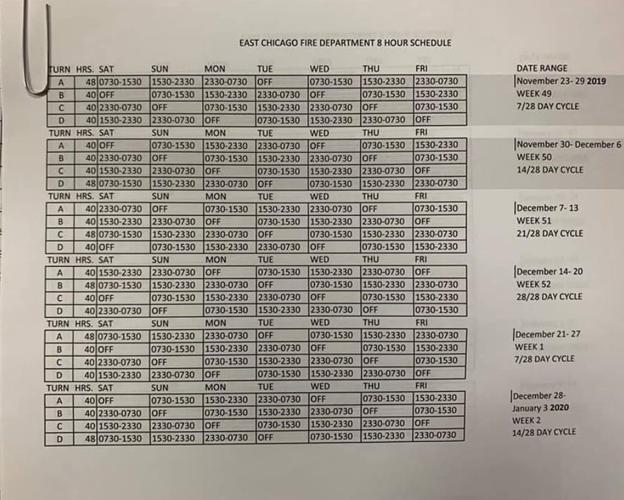 EAST CHICAGO — Sudden shift changes for the city's firefighters have the local union and its membership outraged, but the fire chief and Mayor Anthony Copeland's administration says the move is all about cost savings.

Union members and a city council member opposed to the change say the shifts are unworkable and retaliation for the union seeking to negotiate with the East Chicago City Council and for having endorsed Copeland’s opponent in the May primary election.

"I don’t know who came up with it. It’s not a good thing. None of our membership wants this schedule,” said Dave Mata, union president for East Chicago Professional Firefighters Local 365.

Mata said the union is considering a lawsuit disputing the city administration's actions.

Firefighters will be expected to work an eight-hour morning, afternoon and overnight shift — rotated over three days — before receiving 24 hours off, according to a memo and shift schedule sent out Dec. 4 by Fire Chief Anthony Serna.

"It’s not about retaliation. It’s about efficiency. Tradition can never trump efficiency," Copeland said in a statement. 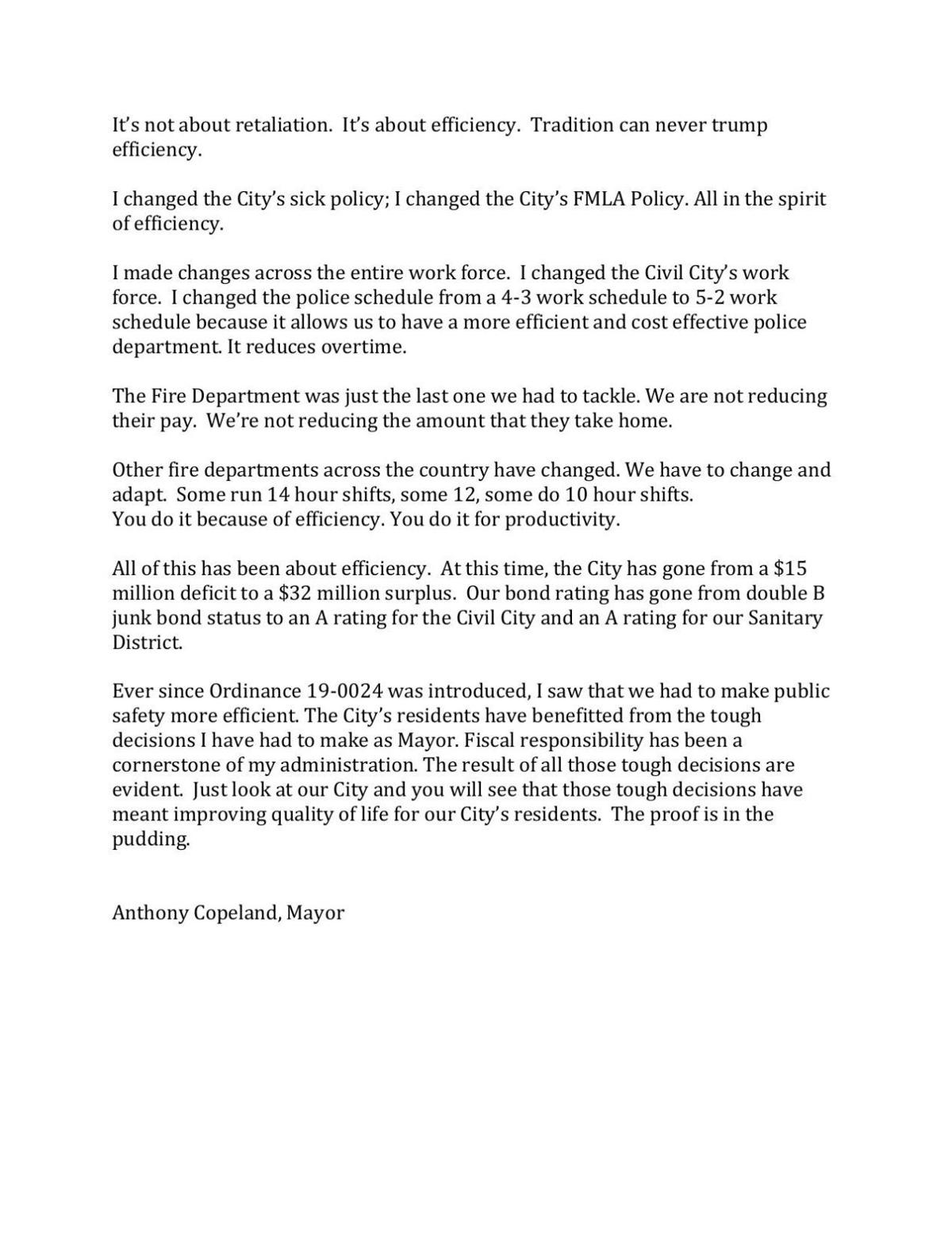 The memo, which does not provide any explanation for the change, states the new shifts will begin Saturday.

“There was no notice. Instead, they do this right before the holidays. It’s one thing to go into this in January and allow firefighters to get their family affairs in order,” Mata said. “They threw this at us (Wednesday), and now we have a lot of our guys scrambling for day care. It’s turmoil that’s unnecessary.”

Currently, firefighters work 24 hours on, 48 hours off, like most fire departments across the country, Mata said.

“They’re not even giving us straight days or straight nights,” Mata said. “This requires us to constantly be working different shifts. That’s going to result in sleep deprivation, and we can never adjust. It’s unsafe for these firefighters. This is unheard of.”

Serna said the eight-hour, rotating shifts were necessary because Indiana code requires firefighters to take 24 hours off before subsequent shifts.

Serna and Copeland denied the move was retaliatory.

Serna said the change will save thousands in overtime costs with increased minimum staffing standards per shift and the hiring of more firefighters. The move away from a 24-hour shift in Washington, D.C. saved the department millions, Serna said, and the administration ultimately prevailed in a union lawsuit opposing the change.

"Going from a 24-hour schedule to an 8-hour is a break with tradition, and any break can be unsettling," Serna said.

East Chicago City Councilman Emiliano Perez, a former chief of staff to Copeland who also served as fire chief from 2012 to 2015, said he believes the shift change is retaliation for the fire union “standing up for themselves” and campaigning for Copeland’s opponent, former state representative John Aguilera, in the primary.

“There was no discussions about the shift change prior to the (union’s) endorsement,” Perez said. “To disrupt people’s lives like this with a week's notice is really unconscionable. I’m in awe. Copeland knows this is wrong.”

Serna said the union knew this was a possibility back in October but weren't given the Saturday start date until a Wednesday memo.

Serna said this shift change is a way to ward off anticipated ballooning costs tied to a salary proposal he expects the union to float again next year with the incoming council. The proposal seeks 168 extra hours of time off and steep pension increases.

Mata argued the union proposal Serna referenced was never meant to be a final form, only a starting point in negotiations reflective of salary and benefits before 2011 reductions and freezes were in play.

"The original ordinance we worked on was a draft of everything we used to have back before 2011 to show what the department used to look like," Mata said. "We start in January from ground zero. We're not asking for the world."

Before Perez was elected to the council in 2017, he said members traditionally did not have direct input on police and fire issues and instead deferred to the mayoral administration and the Board of Public Safety.

But state statute holds that legislative bodies set the compensation for police and fire departments.

“I believe that is the legislation’s intent, and we should not be allowing the police and fire issues to be addressed by the executive branch. Now we’ve taken control,” he said.

Perez said firefighters have gone most years since 2011 without a proper pay raise.

The council passed a different salary ordinance by a 5-4 vote in October. A 6-3 vote would have been veto-proof, but Serna said Copeland was able to convince one member to vote against the measure, allowing him to exercise the veto option.

Mata said the fire union began negotiating with the council, including Perez, citing the mayor’s lack of an “open-door policy.”

“He’s turned us down for a meeting, in general, all year. The mayor has a rule that everything has to go through the chief. Even though we’re working with the council now, our members still want to keep an open relationship with the mayor,” Mata said.

Perez said the union has every right to back another candidate and negotiate with the council for a contract. He said when Copeland took office in 2010, the city was $15 million in debt, prompting freezes or reductions in sick time and other benefits for police and firefighters.

“Now the city is the healthiest it’s ever been (financially),” Perez said. “All we’re trying to do is reinstate some of what’s taken from these people.”

The city argues firefighters have been made whole since that time due to bonus pay and raises.

Since that time, the post has gone viral with more than 700 shares and 400 comments, mostly by people equally outraged.

“People have prior engagements and children. He did this right before the holidays. When most of us already have plans with our family,” Rivera wrote.

Serna provided no reasoning for the change in the memo, but told The Times the trades policy was suspended because it potentially violates the 24-hour off rule in Indiana statute.

In the Facebook post, Rivera said the shift changes were enacted because the union desires to negotiate contract terms with the East Chicago City Council — rather than the mayor's administration setting the salary and benefits each year.

Rivera said he doesn’t see how this saves the city money because firefighters are salaried with allowed overtime.

On the current 24/48 rotation, firefighters are scheduled to work a set number of hours per year. With the shift change, working 40 hours a week, he believes that reduces the total hours worked, he said.

“So we’ll make the same, and now they’re paying us more per hour,” Rivera said.

Serna said this shift change, while startling, provides a better quality of life.

"If they have a day shift, that gives them all evening with the family. And if they work a midnight shift, they can open presents with their kids in the morning," he said.

Serna said he hasn't done the math yet to calculate hourly wages or annual savings projections, but assured that the changes will save more in the long run.

First responders — police, firefighters and emergency medical personnel —often face abuse and even attacks and they never know whether respond…

EAST CHICAGO — Firefighters locally and around the area have a new site for training.

Man charged in bachelor party gunfight that killed another man

INDIANAPOLIS — A man is facing four charges including murder in connection with a bar gunfight that killed another man.

CHICAGO — The city of Chicago will spend $2.5 million to settle lawsuits filed over the deaths of two young people because of alleged police w…

The firefighter and EMT union president in the District of Columbia is disputing recent claims made by East Chicago’s fire chief that the administration there save money and prevailed in arbitration against the union over shift changes.

EAST CHICAGO — Firefighter union supporters and members are gearing up for a large showing at Monday night’s city council meeting, during whic…