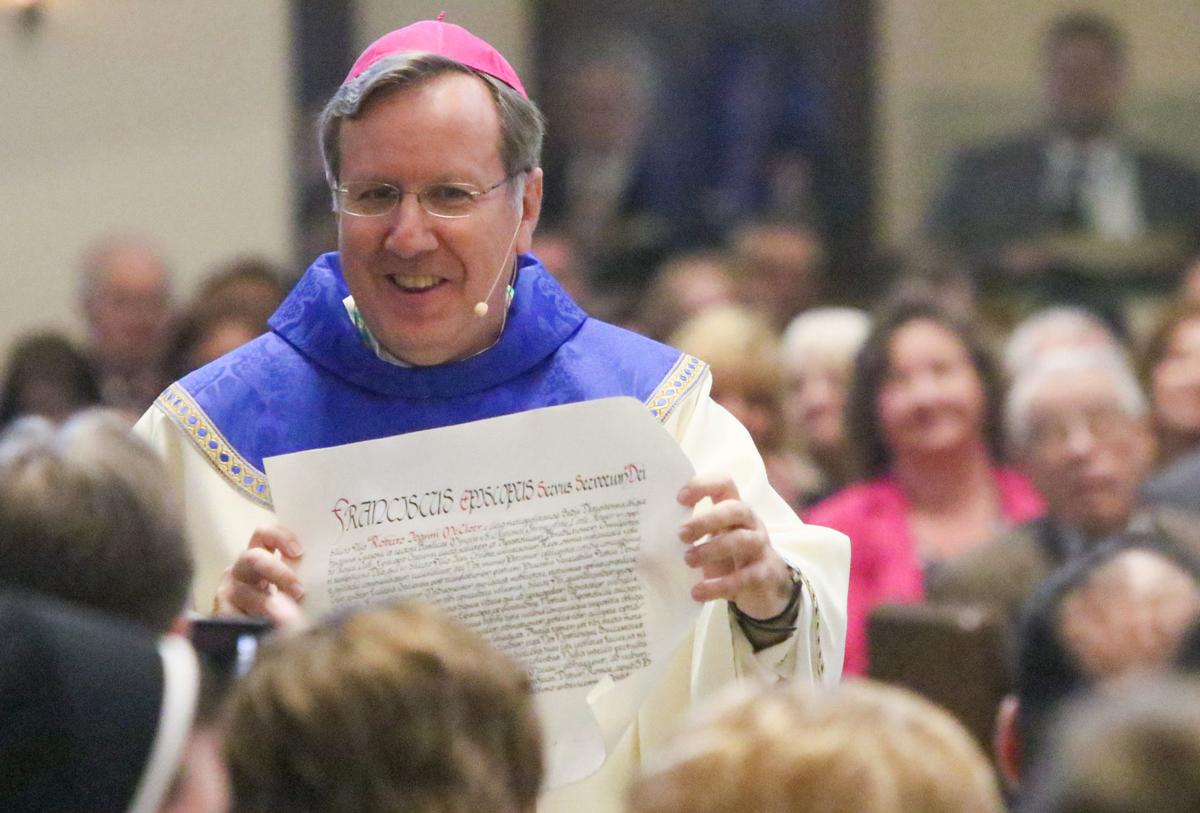 Bishop Robert J. McClory shows the Mandate of the Holy See that was read by Archbishop Christophe Pierre, Apostolic Nuncio of the United States of America, during his ordination Tuesday at Cathedral of the Holy Angels in Gary. 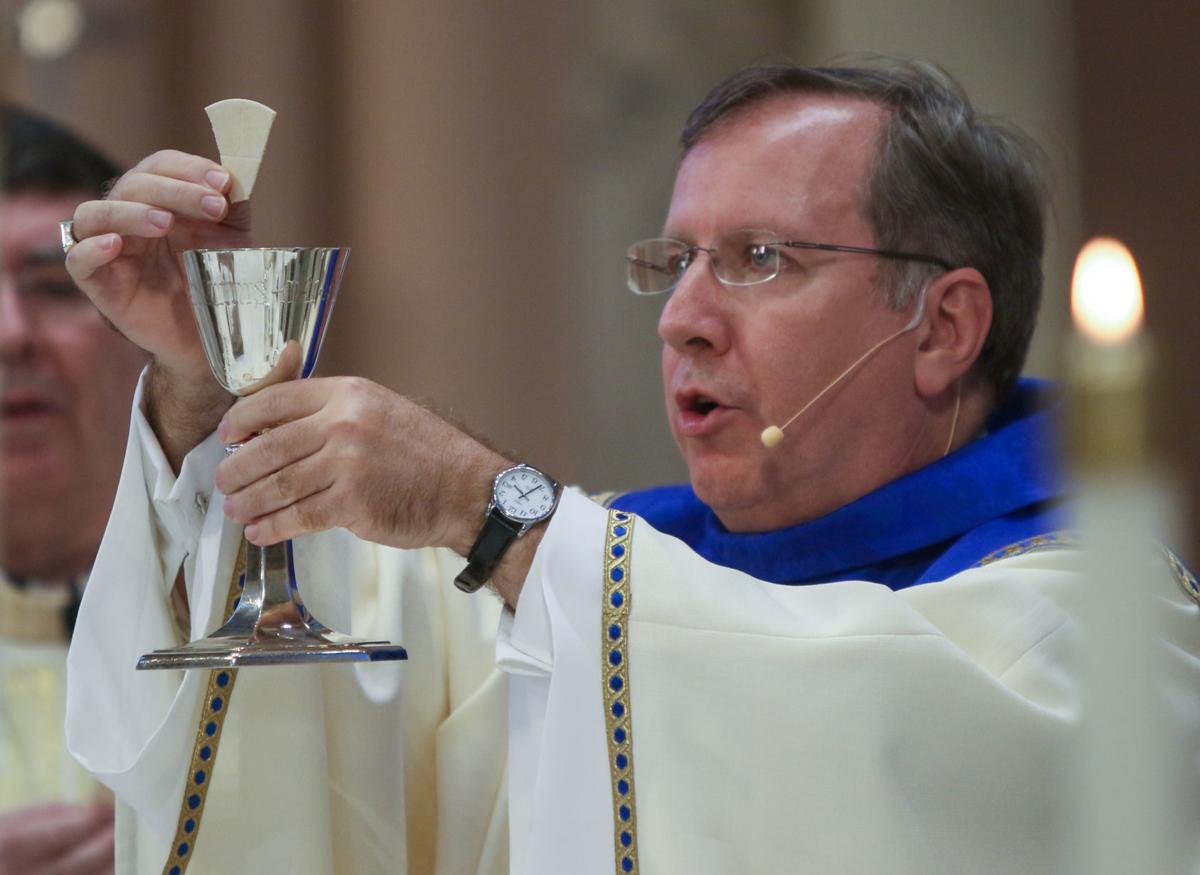 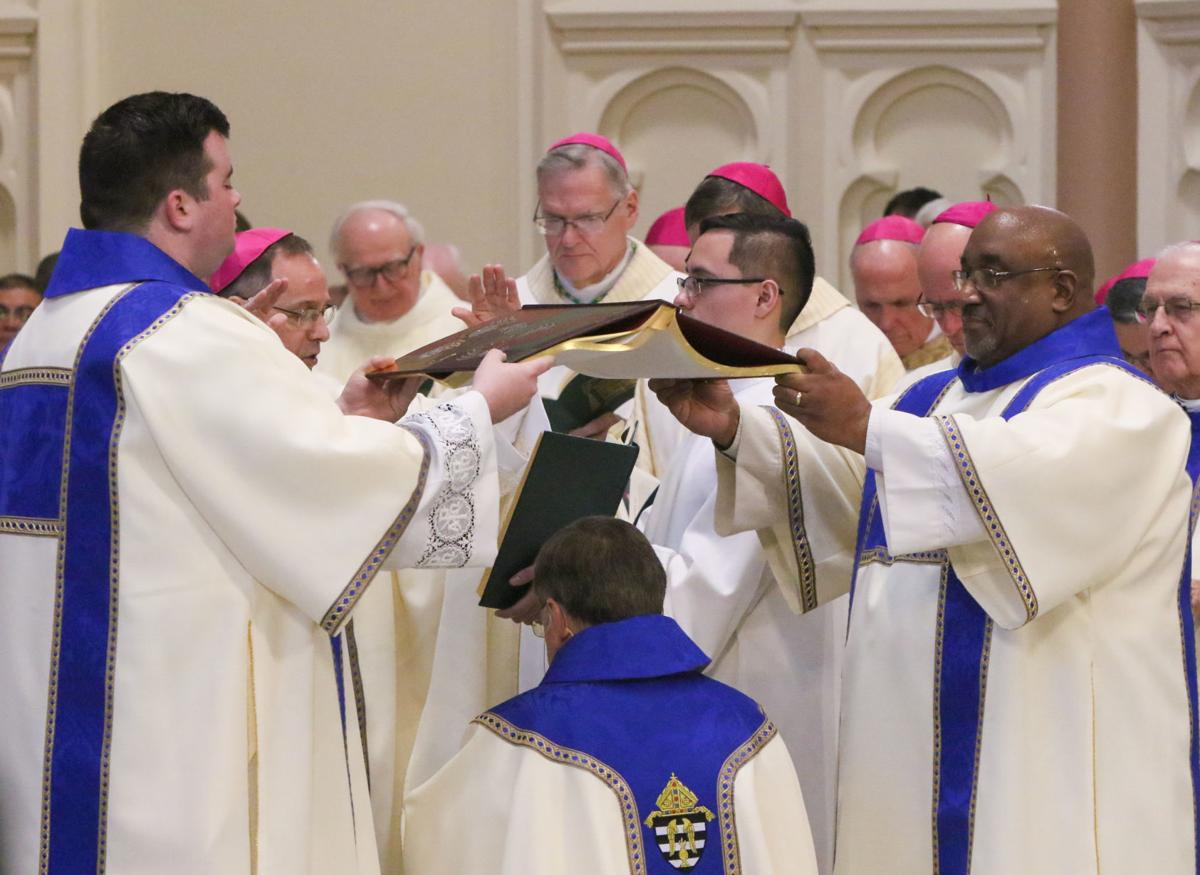 The Gospel Book is opened and held over the head of Bishop Robert J. McClory. 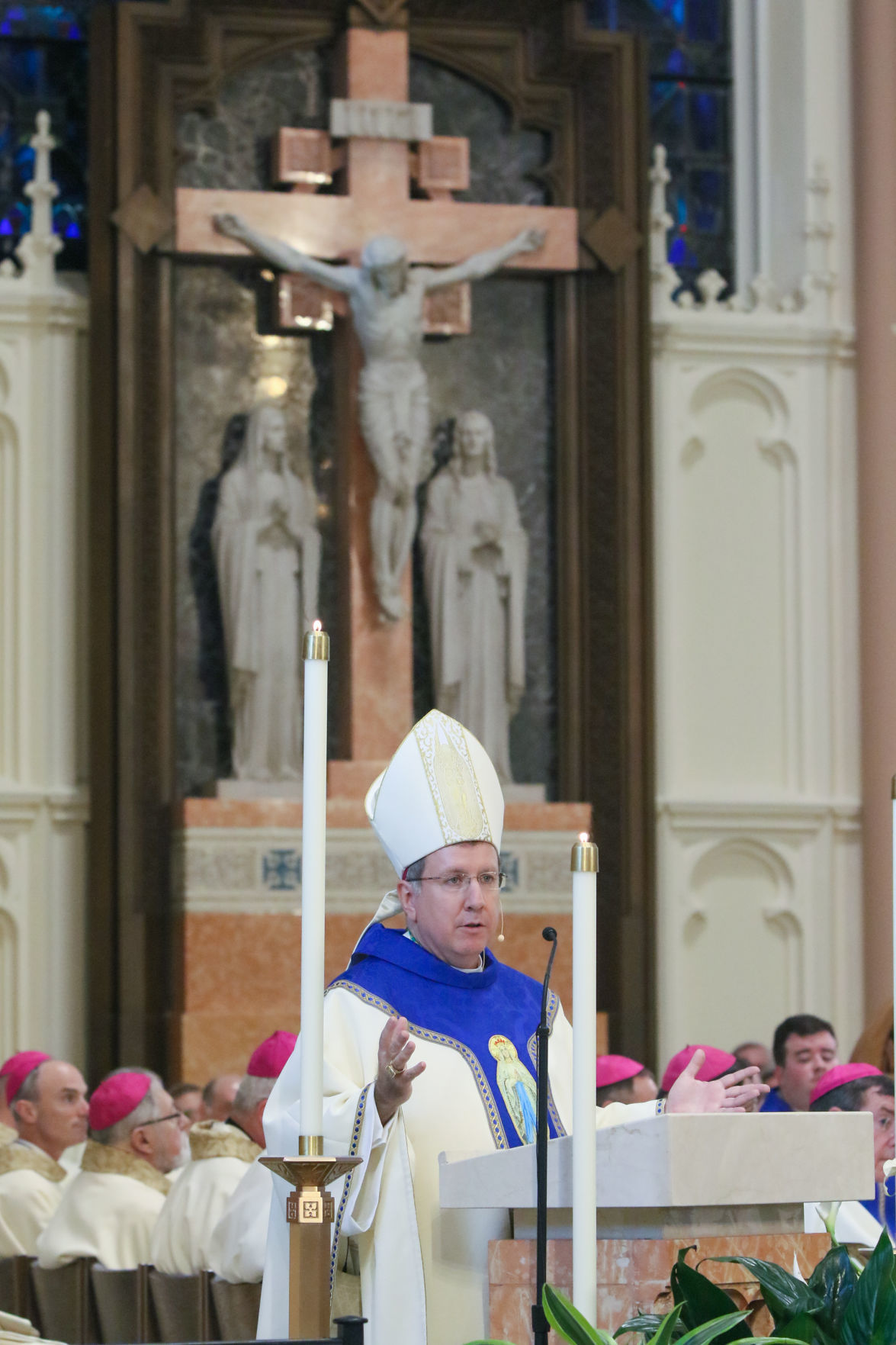 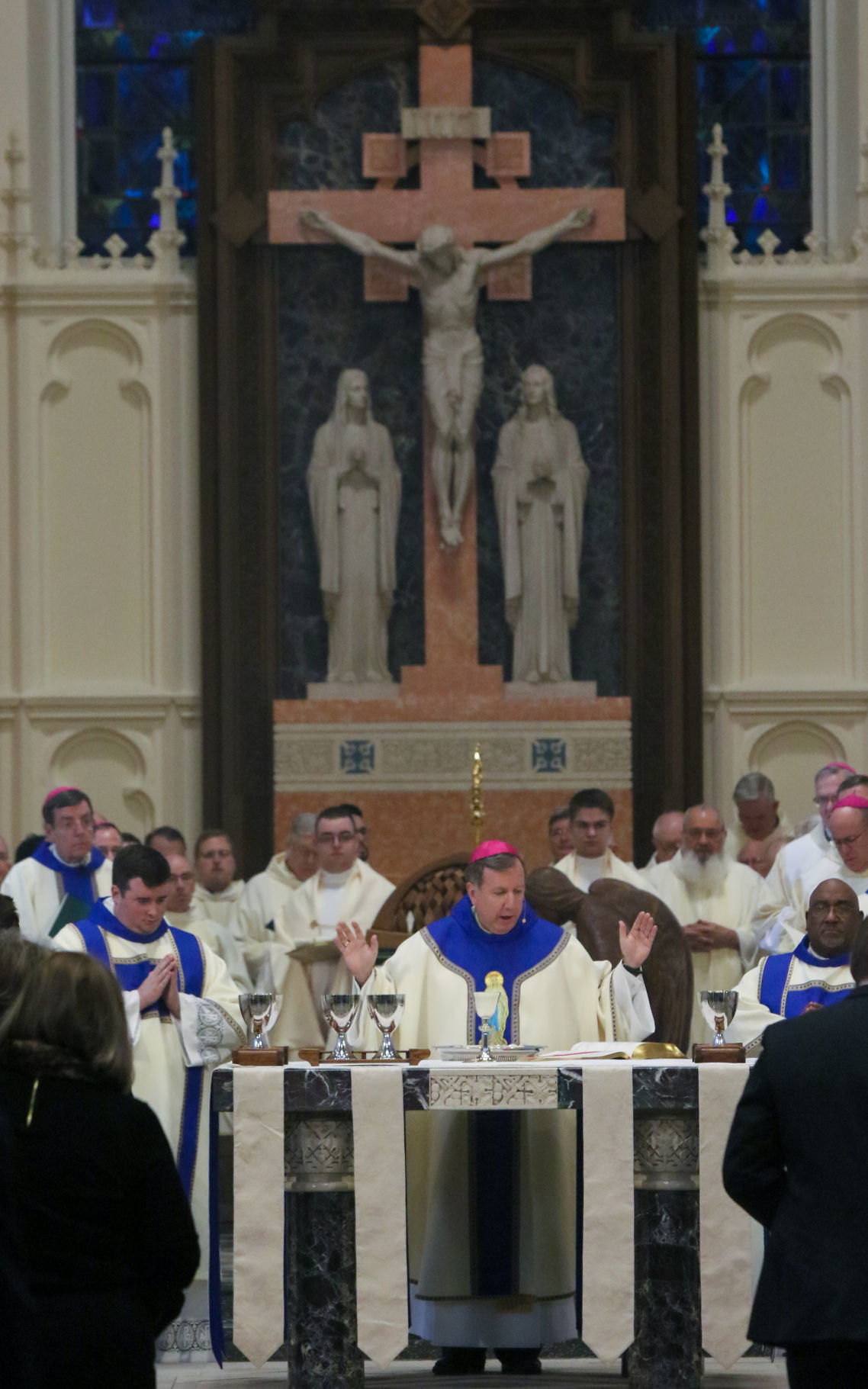 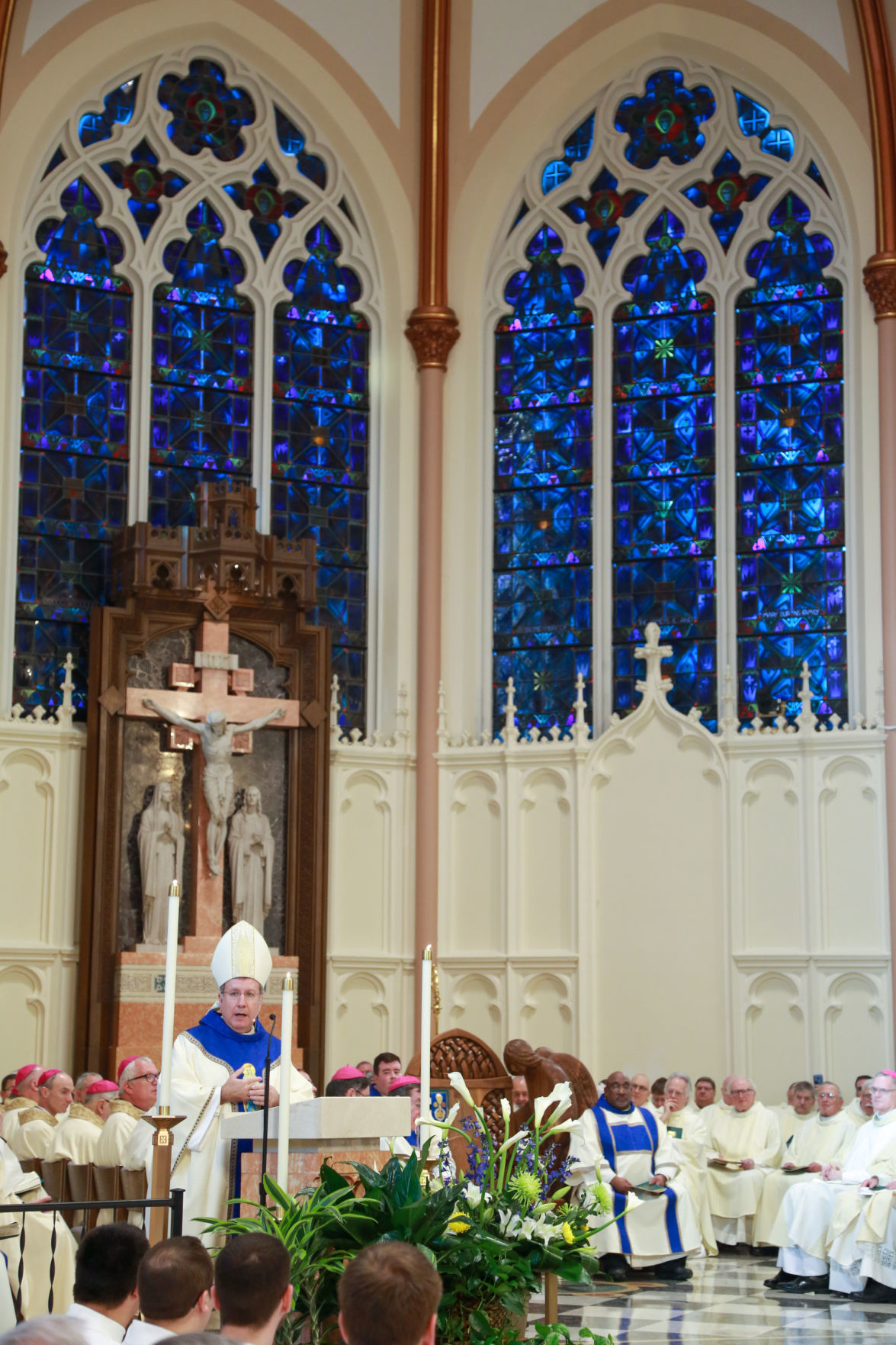 GARY — The Most Rev. Robert J. McClory became the new bishop of the Gary Diocese Tuesday at a historic ordination Mass at the Cathedral of the Holy Angels.

McClory becomes only the second priest to ascend to the office of Gary bishop more than 60 years after Andrew G. Grutka rose from a Gary parish priest to oversee the then-newly created diocese.

Grutka, who died in 1993, is entombed in the cathedral’s east transept.

More than 800 pressed into Holy Angels to witness the ancient rite of the laying on of hands by neighboring bishops conferring their authority on McClory.

McClory singled out a native son of Northwest Indiana among the many visiting clergy: Lansing, Michigan Bishop Emeritus Carl F. Mengeling, who was born in Hammond, graduated from Griffith High School in 1948, was ordained a priest by Bishop Grutka in 1957 and ordained the Lansing bishop in 1995.

McClory promised to faithfully perform his duties as bishop in answer to a series of traditional questions posed him during the ordination ceremony.

He donned the bishop’s ring and the pointed headgear called a miter, took hold of the traditional shepherd’s staff (called a crosier) and was greeted by loud applause from those in the audience at the climax of the more than two-hour ceremony.

Following the traditional Mass and communion, McClory processed around the church to give his first Episcopal blessing and then addressed the assembly.

He thanked Pope Francis “for his confidence in me,” his family and everyone who took part in the service and vowed to the assembly, “My heart is full of love. I will love and honor you all the days of my life.”

The audience replied with more applause.

The Rev. Martin Dobrzynski, pastor of St. Michael the Archangel in Schererville, said the ordination of a bishop is a signature event in the life of a priest and the Roman Catholic diocese he oversees.

“It is more than the appointment of a chief administer,” Dobrzynski said. It is a member of the church reaching the highest sacrament of the church’s hierarchy of holy orders: Deacon, Priest and Bishop.

All bishops are appointed by the Pope, and ordained by at least two bishops. The ordination also is a statement that the priests and deacons of the diocese will be oriented to the new bishop’s ministry and leadership.

Dobrzynski said the ordination rite, with the "laying on of hands" is drawn from the earliest days of the Church as recorded in the New Testament’s Acts of the Apostles and early first century documents.

Riding Shotgun with NWI Cops: On assignment in Griffith

He said the history even goes back to Old Testament days when a Jewish High Priest was similarly honored with such ceremonies.

The Ordination Mass took place on a sun-kissed winter afternoon. More than 100 diocesan and visiting deacons, priests, members of the Knights of Columbus, Knights of Peter Claver and Knights and Ladies of the Holy Sepulchre led the procession into the cathedral, most wearing white vestments.

The Diocesan Choir sang in Latin verse and others, including Bishop McClory, read scripture in both English and Spanish.

Archbishop Pierre read to the church the official letter — known as a papal mandate — by Pope Francis calling McClory to the office of Bishop. Pierre read, “It is our wish to entrust this ministry to you. We appoint you Bishop of Gary.”

McClory then held up the document and displayed it through the church, to the delight of the crowd before sitting in the the official chair of the bishop — cathedra in Latin — acknowledging his role as Bishop of Gary.

The Indianapolis Archbishop thanked McClory in his homily for saying “yes” to the Pope’s invitation and “moving into unknown territory ... and becoming a Hoosier.”

Born in Detroit, McClory is the youngest of four children of James and Ann McClory.

McClory earned a bachelor’s degree in political science and communications from Oakland University, a master’s degree in public policy and administration from Columbia University and a doctorate from the University of Michigan Law School.

Chapel of the Resurrection

Cathedral of the Holy Angels

Floyd's family: 'This is just the beginning'

Floyd's family: 'This is just the beginning'

As the group rallied with flags and signs, honks of support resounded on Calumet Avenue in Hammond.

“Your deepest passion comes from your deepest pain,” Panther said. “Suffering has given me the passion to go back to Africa and work with people afflicted with disabilities.”

“Her efforts behind the scenes help make our school library a welcoming place where students can come and feel capable and supported.”

"The Hammond Police Department has ensured us that our school is safe and this incident poses no threat to our students and staff," Principal Lorenza Jara Pastrick stated in a letter to families.

Merrillville could use TIF for infrastructure work

Cedar Lake Fire Chief Todd Wilkening is looking to put his recent suspension behind him and move forward.

HOBART — Albanese Confectionery Group, producer of the "World's Best Gummies," is looking to expand its operations once again.

Michael J. Ramirez, 74, was pronounced dead Feb. 23, and his immediate family or relatives have not yet been found, according to a Wednesday coroner's statement.

Bishop Robert J. McClory shows the Mandate of the Holy See that was read by Archbishop Christophe Pierre, Apostolic Nuncio of the United States of America, during his ordination Tuesday at Cathedral of the Holy Angels in Gary.

The Gospel Book is opened and held over the head of Bishop Robert J. McClory.