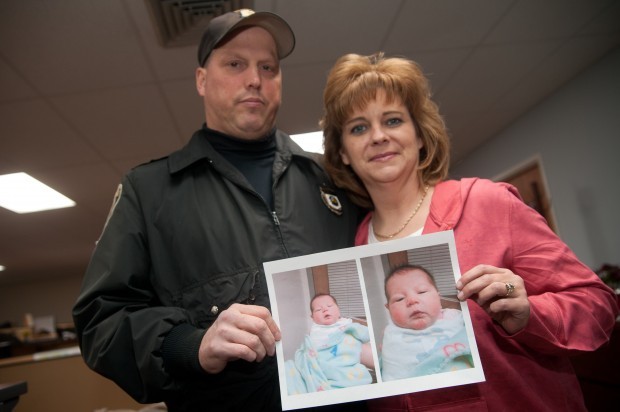 Merrillville police officer Gerald Croarkin and his wife, Angela, hold up a photo of an abandoned baby they found on their porch Friday night. If Angela had not gone outside for one last cigarette that night, the newborn might have died in the bitter cold. 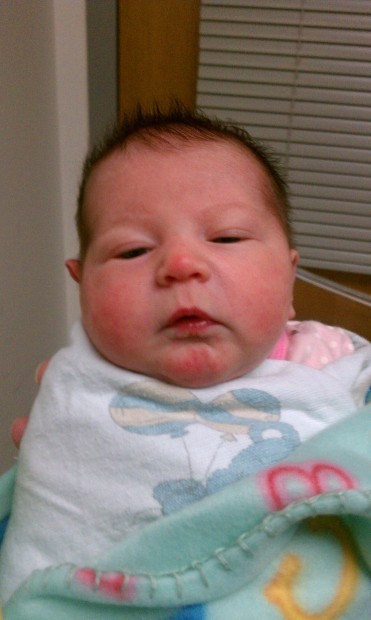 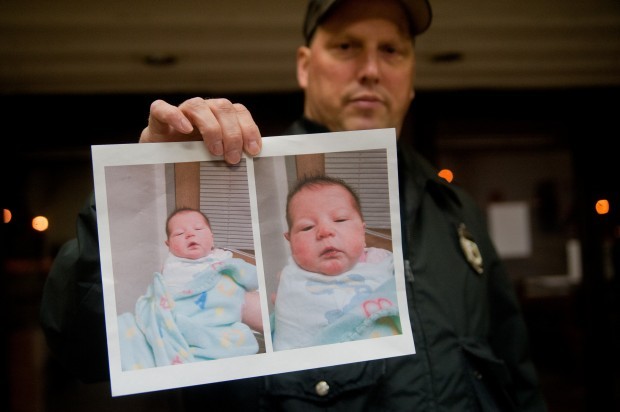 Merrillville police Officer Gerald Croarkin holds up a photo Monday of an unidentified baby that was left on his and his wife's porch in the freezing cold Friday night. No one knocked or rang the bell after leaving the child wrapped in a sweater inside a covered box.
Deborah Laverty

MERRILLVILLE | Patrol Officer Gerald Croarkin and his wife, Angela, were pretty much tucked in for the night Friday, shortly before 8 p.m., when Angela went outside to smoke one last cigarette.

It was then that Angela, bracing herself for one of the coldest nights of the year, found on their front steps what she and her husband soon discovered was a newborn baby girl wrapped inside a sweater and placed inside a covered cardboard box.

"I think the baby must have been left by a young girl who panicked. ... Five minutes later and the outcome could have been very different had I not gone outside when I did," Angela Croarkin said.

Gerald Croarkin called finding the baby girl "an act of God" since no one rang their doorbell or knocked to alert them about what had taken place.

"The baby wouldn't have lasted long out there given the conditions Friday night," he said. "It's nothing but a miracle."

The baby girl, who was taken to the Methodist Hospitals Southlake Campus in Merrillville, is in good health and is full-term.

Angela Croarkin said she knows the newborn baby couldn't have been outside for more than 15 minutes.

That's about how much time lapsed between when she let their German shepherd back inside -- after a bathroom break -- and her seeing the box when she went back outside to smoke.

"When I saw the box outside it struck me as odd," Angela Croarkin said.

Her first instinct was to fear what might be inside the box. She called for her husband, and both, at first, worried that it might be something dangerous that was placed on a police officer's front steps.

"Thank goodness we kept a level head," she said.

Gerald Croarkin said when he gingerly opened the box lid he saw some movement and thought it might be a puppy or kitten.

"It was then that I heard a small cry and said, 'Angie I think there's a baby inside,'" Gerald Croarkin said.

He said they brought the baby inside and called for emergency services.

Angela Croarkin, a mother of three sons and stepmother to a daughter, said after getting over the shock of finding a newborn she carefully touched the baby's hand and rubbed her cheeks.

She said the baby was wrapped inside what appeared to be a woman's blue sweater and had a red bandanna wrapped around her head.

"Someone wanted us to take care of her. I don't agree with the way the mother did it, but I could feel the love of the mother the way she wrapped the fleece sweater around her," Angela Croarkin said.

Her husband, a 17-year veteran with the East Chicago and Merrillville police departments, said he's never seen anything like it.

"I can't imagine who did this, but I'd sure like her to come forward and tell her story. In my 17 years as a police officer I have seen shootings, stabbings, abuse and neglect, but this one tops them all. You never expect to find a baby girl on your front steps when it's 5 degrees out," Gerald Croarkin said.

The baby girl is described as Caucasian, with dark hair and dark eyes, weighs 5 pounds, 15 ounces and is 18 inches in length.

Indiana's Safe Haven Law enables a person to give up an unwanted infant anonymously without fear of arrest or prosecution.

A parent, family member, friend, minister or priest, social worker or any responsible adult may give up custody of a baby less than 45 days old to a hospital emergency room, fire station or police station.

Distressed parents can get more information by calling the Safe Haven Hotline at (877) 796-HOPE or by visiting www.safehaven.tv.

Merrillville police officer Gerald Croarkin and his wife, Angela, hold up a photo of an abandoned baby they found on their porch Friday night. If Angela had not gone outside for one last cigarette that night, the newborn might have died in the bitter cold.

Merrillville police Officer Gerald Croarkin holds up a photo Monday of an unidentified baby that was left on his and his wife's porch in the freezing cold Friday night. No one knocked or rang the bell after leaving the child wrapped in a sweater inside a covered box.
© Copyright 2021 NWI Times, 601 W. 45th Ave. Munster, IN | Terms of Use | Privacy Policy
Powered by BLOX Content Management System from TownNews.com.
You don't have any notifications.