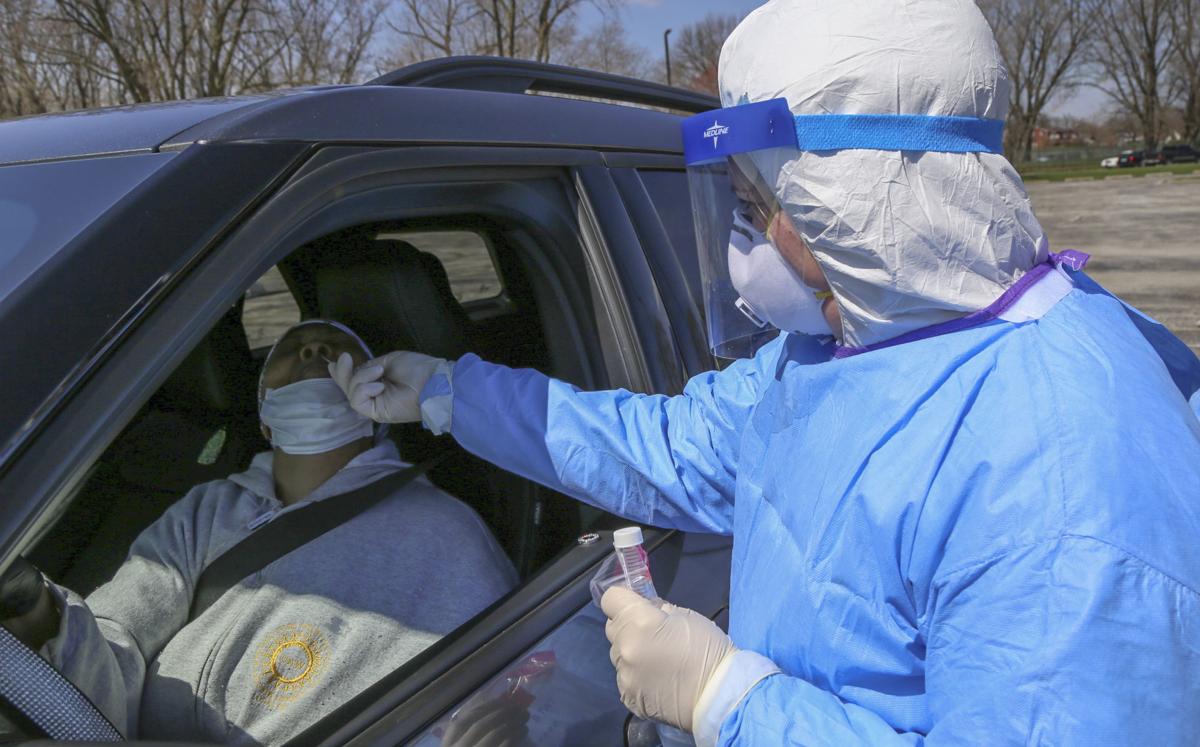 Dana Bachman, of the Indiana State Department of Health, takes a swab from Annie Cotton, of Hammond, at a COVID-19 drive-thru testing clinic Thursday at St. Timothy Community Church in Gary. 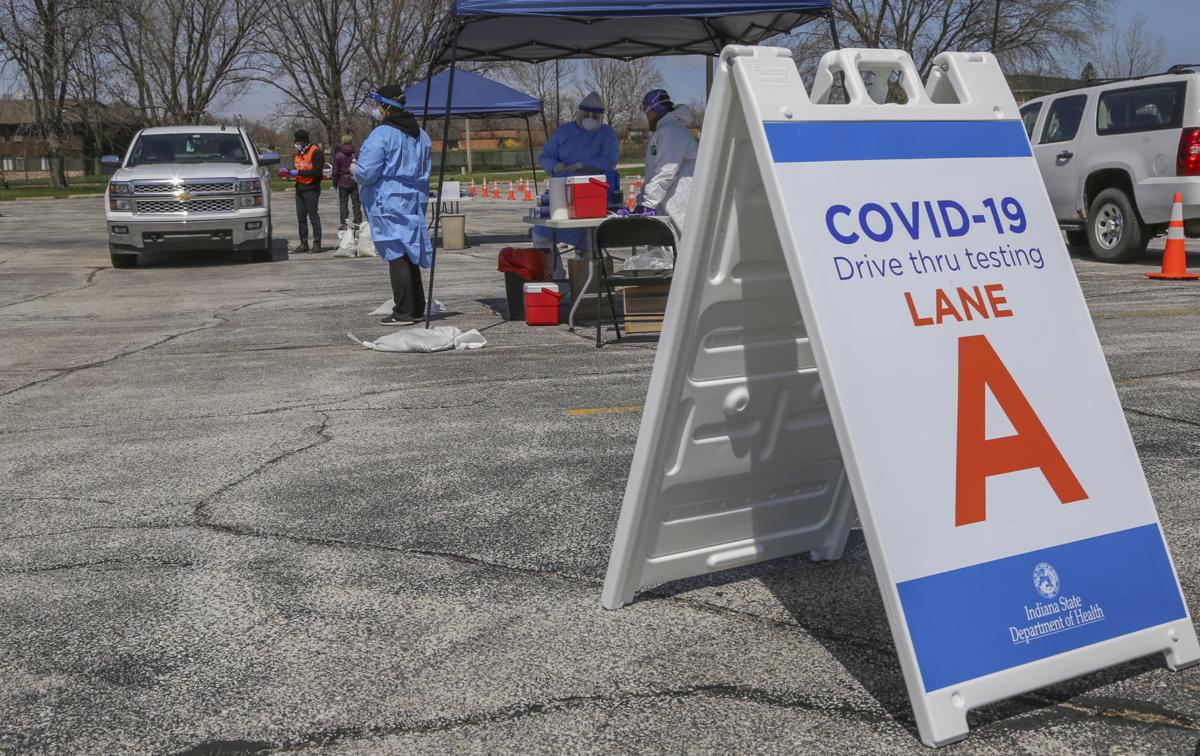 Indiana State Department of Health workers await the next patient during a COVID-19 testing clinic Thursday at St. Timothy Community Church in Gary. 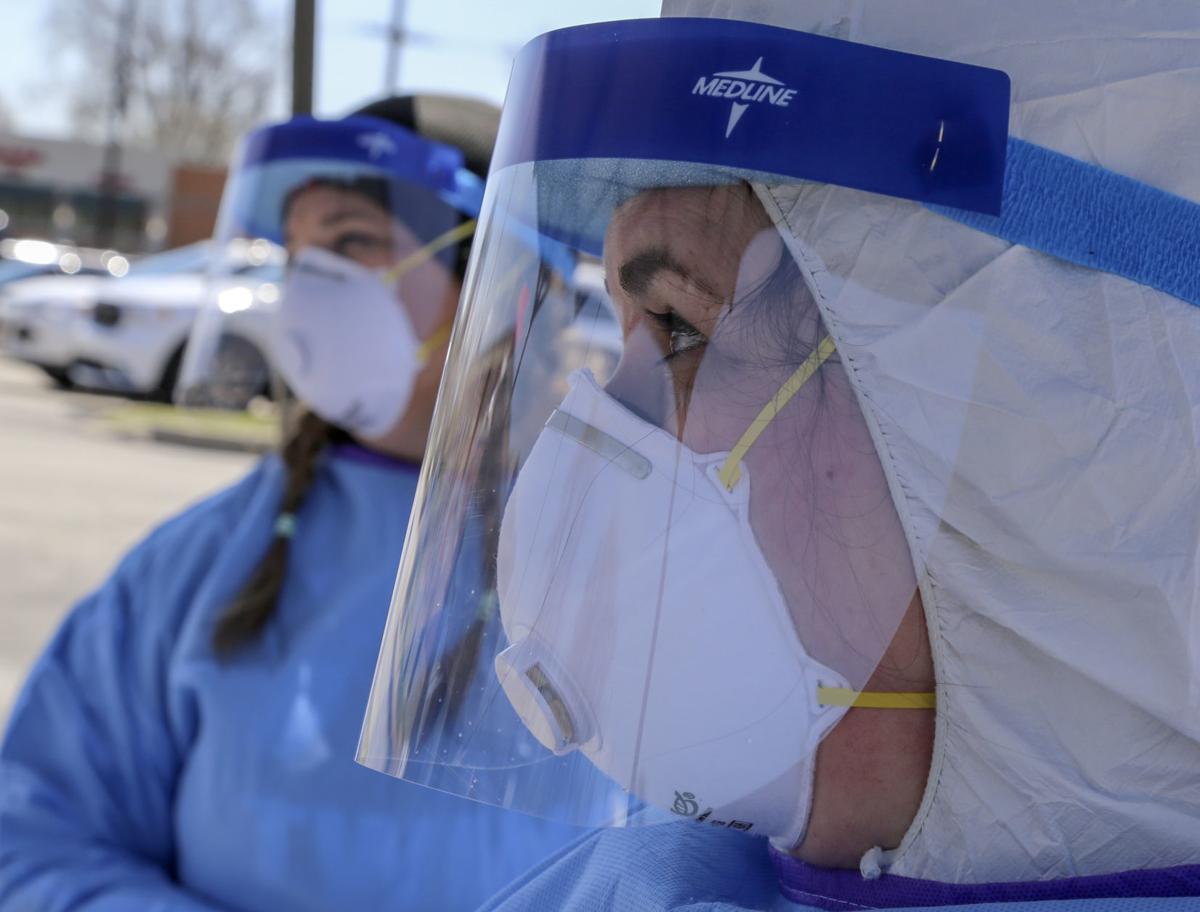 Rebekah Polite, left, and Dana Bachman, of the Indiana State Department of Health, wait for people at a drive-thru COVID-19 testing clinic Thursday at St. Timothy Community Church in Gary. 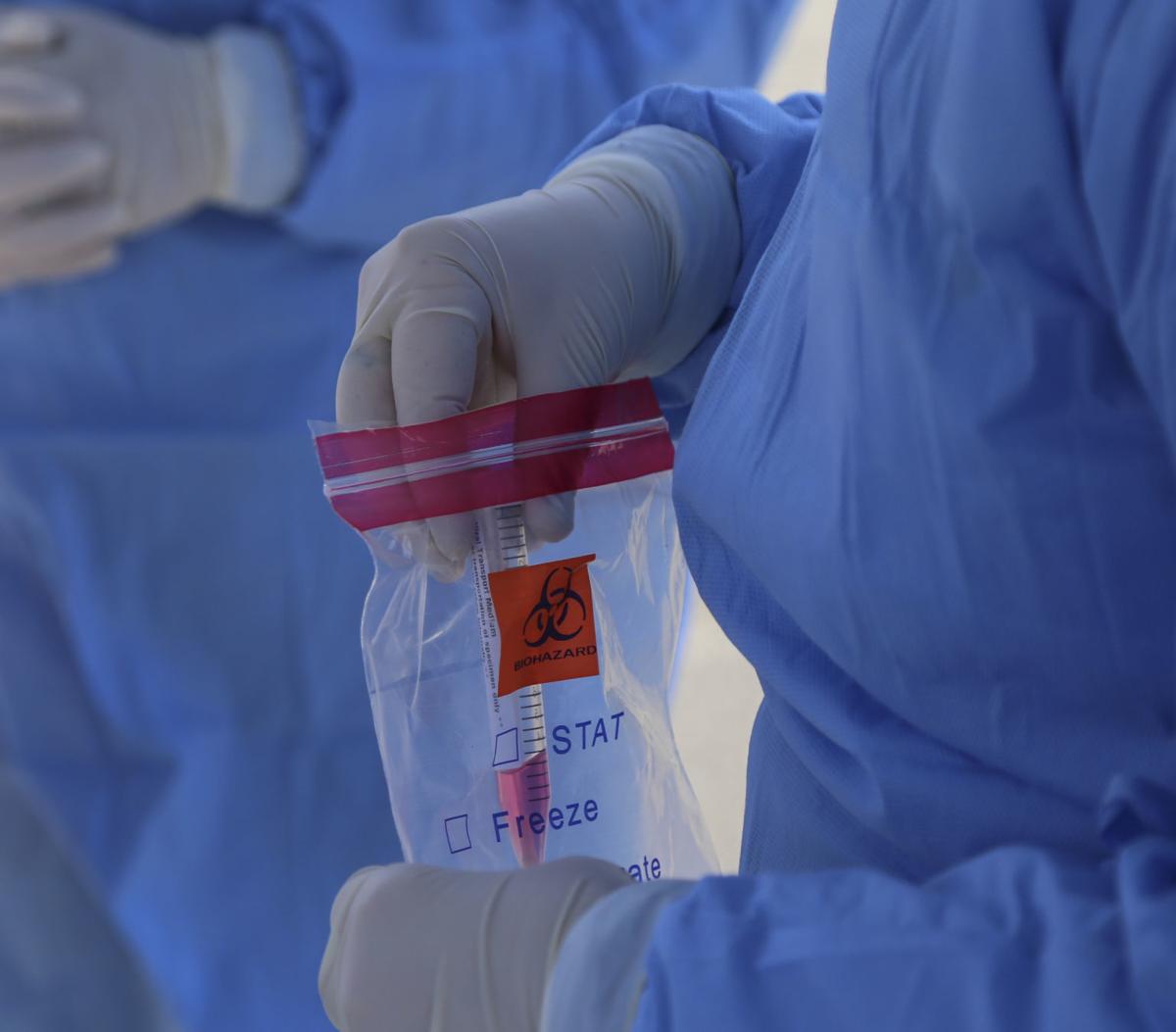 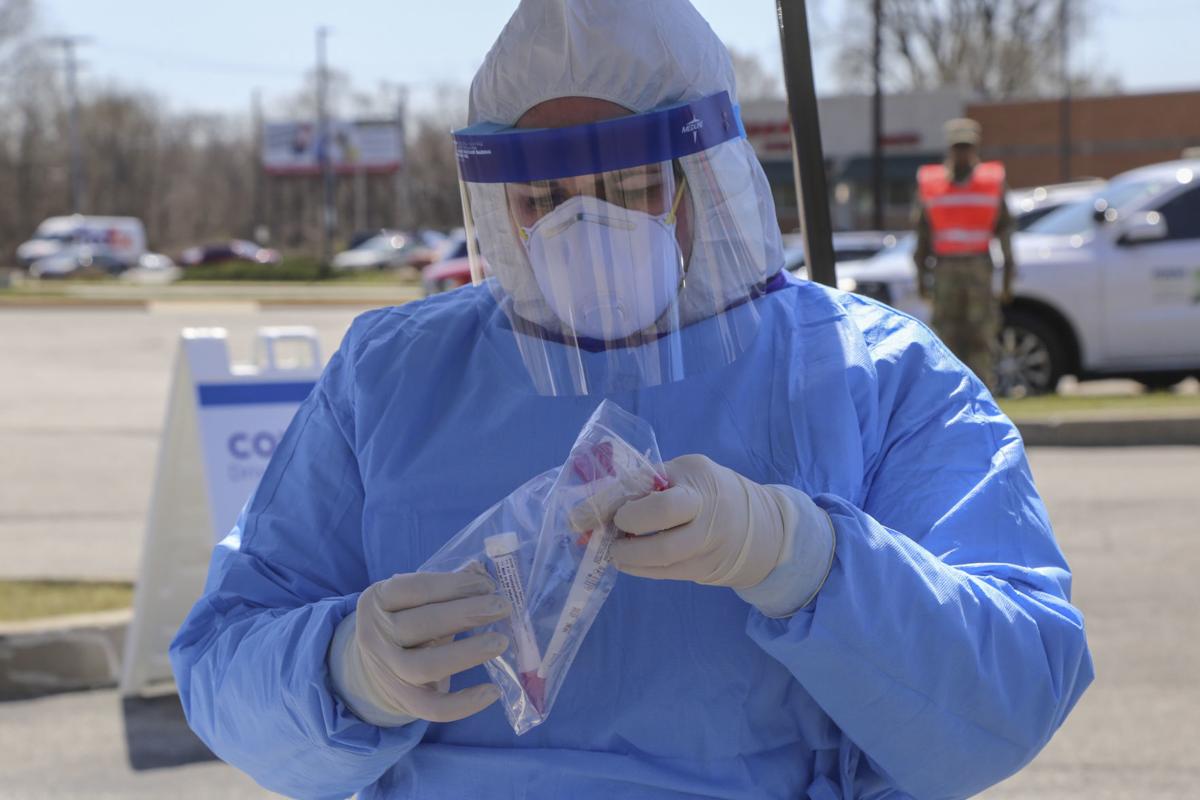 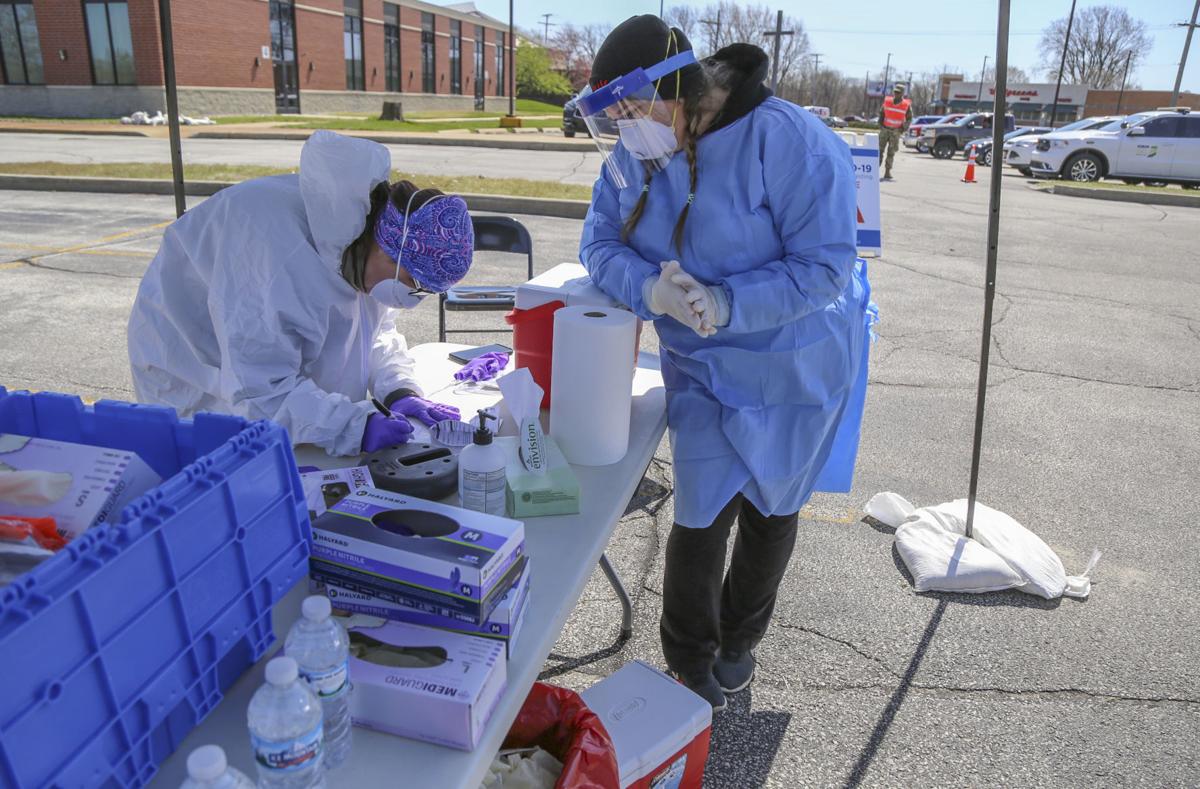 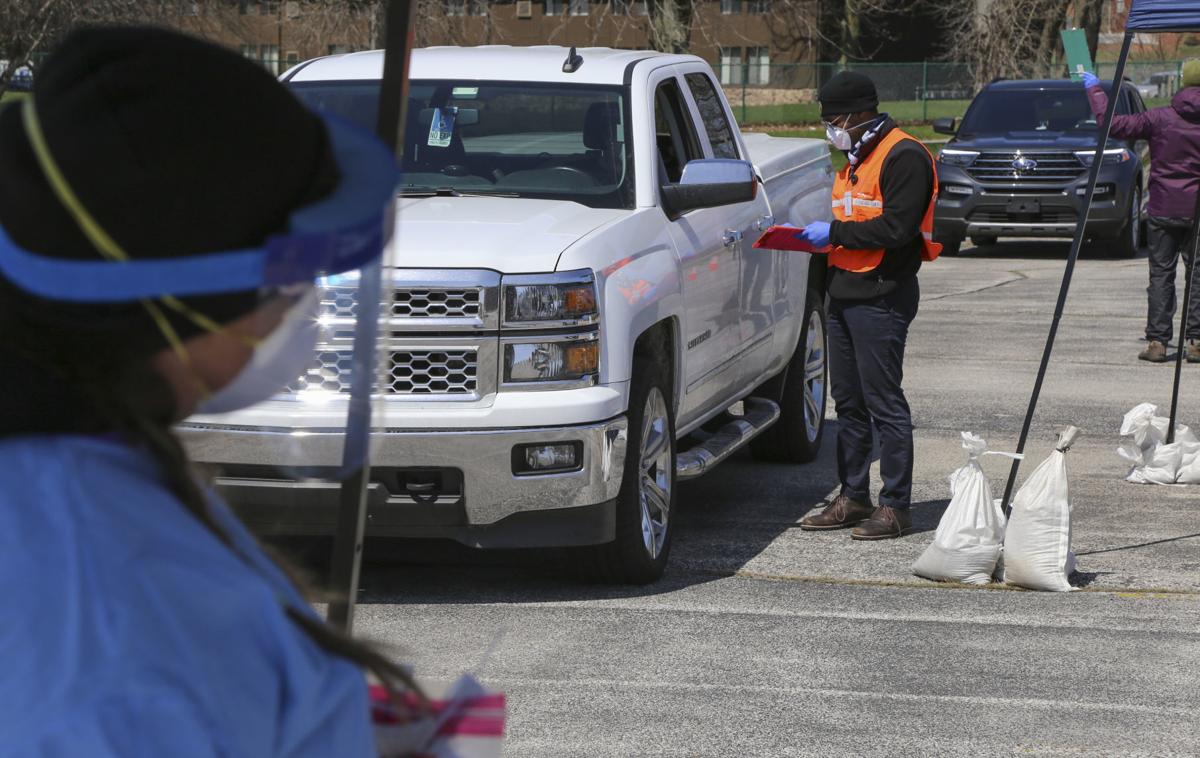 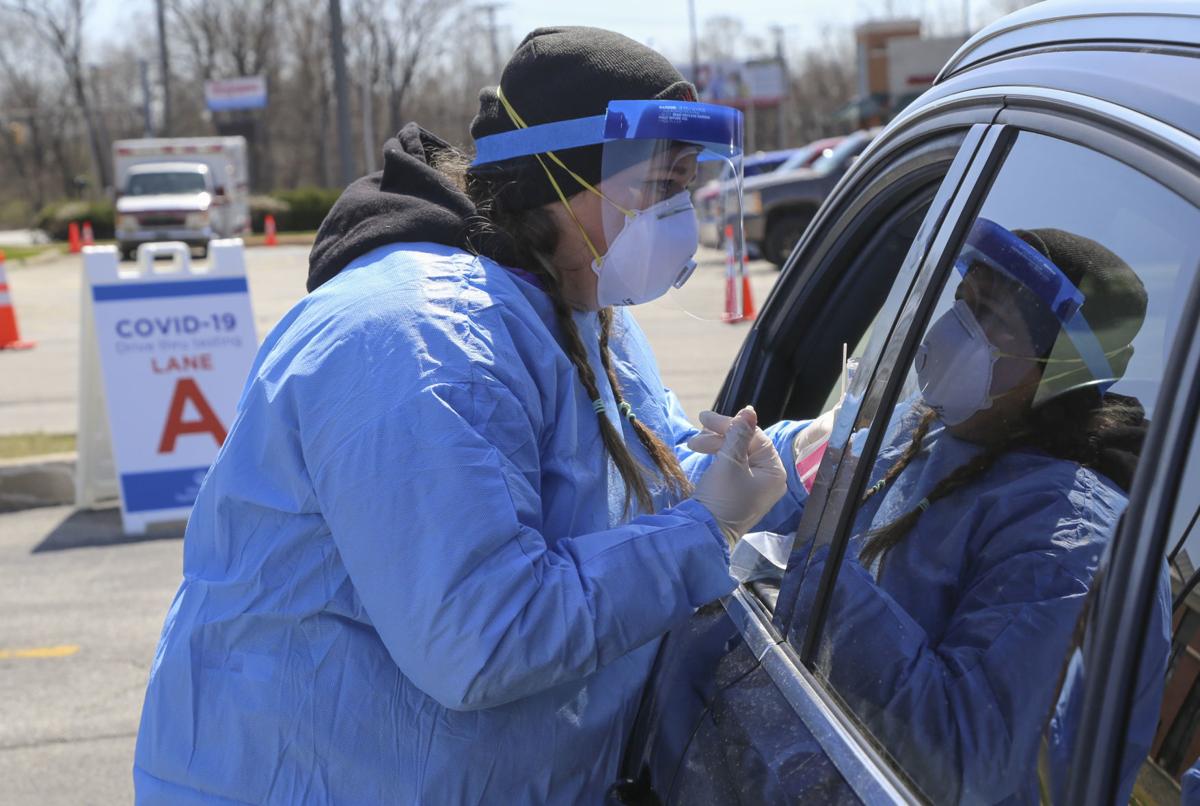 Rebekah Polite, of the Indiana State Department of Health, talks to a motorist Thursday during drive-thru testing for COVID-19 at St. Timothy Community Church in Gary.

A day after Indiana Health Commissioner Dr. Kristina Box said she was cautiously optimistic that the state may be seeing a "flattening of the curve" in its fight against coronavirus, Gov. Eric Holcomb announced Thursday he would work with six other Midwestern governors in deciding when and how to reopen their economies.

But health officers said the Region does not yet have the ability to adequately test and — in Lake County — trace contacts, one of four factors upon which Holcomb and other governors said they would base their reopening decisions.

Dr. Chandana Vavilala, Lake County’s top health officer, said her staff of about 35 has been working around the clock but still lacks the manpower to trace all contacts as the county's number of positive cases has continued to increase.

Case investigation, or contact tracing, includes interviewing the patient to determine where the person has traveled and with whom the patient has been in contact.

After identifying people in contact with the patient, health department workers distribute infection-control instructions, such as self-isolating procedures, and remain in communication with the patient until the person has recovered.

"We've moved every resource we have (to contact tracing)," she said. "At this point, we are able to contact only the high-risk populations."

The department has received help from retired public health workers, college students and staff from other departments who can be temporarily spared to handle contact tracing, she said.

"We don't have adequate staffing to deal with a pandemic of this size, but we're working very hard," she said. "We're appreciative of the help."

Vavilala said she has been in contact with state officials on a daily basis to discuss needs.

State officials said, "Because it is increasingly difficult to identify everyone who had contact with a positive patient as this outbreak progresses, we are asking people who suspect they may have been exposed to COVID-19, are experiencing mild symptoms or have tested positive for COVID-19 to practice self-isolation and notify all those they were in personal contact with over the past several weeks."

The number of positive cases in Lake County surpassed 1,000, according to data released Friday by the Indiana State Department of Health.

In Porter County, which reported 153 positive cases Friday, the county Health Department is well-staffed and has been able to keep up with contact tracing work, Health Officer Dr. Maria Stamp said.

When interviewing patients, workers focus on identifying anyone who has been within 6 feet of the person for more than 10 minutes, she said.

Workers attempt to identify anyone in close contact with the patient up to three weeks in the past, she said.

In the early stages of the pandemic, results from commercial labs were taking up to nine days to come back, she said.

“That was a big problem initially,” she said. “A lot of the time, we’d get the results back and call, and people would be like, ‘Hey, I’m good, thanks.’”

As commercial labs have ramped up testing capacity, turnaround time for results has been reduced to 36 to 48 hours in many cases, Stamp said. Results from Indiana State Department of Heath lab generally take two to three days, she said.

In a recent report from the American Enterprise Institute, five health experts laid out four goalposts for safely reopening the economy.

In addition to the ability to adequately monitor positive cases and their contacts, states must be able to test all people with COVID-19 symptoms, ensure hospitals can treat all patients without resorting to crisis standards of care and see a sustained reduction in the number of cases for 14 days, the experts wrote.

The state department of health said testing supplies remain limited nationally, so it continues to support a targeted approach to testing to focus on high-risk individuals.

The state said it's working to expand testing, including through a partnership with Eli Lilly and drive-thru clinics in Merrillville and Gary during the past two weeks. More than 900 health care workers, first responders and other essential workers with symptoms were tested at the Gary clinic.

Testing at the drive-thru sites was expanded last week to symptomatic people who live with essential workers and symptomatic individuals who are at higher risk due to obesity or other chronic health conditions.

People who do not meet the criteria should monitor their symptoms and call a health care provider if those symptoms worsen so that their provider can determine whether testing is appropriate, state officials said. Symptoms include cough, fever and especially shortness of breath.

State Rep. Mara Candelaria Reardon, D-Munster, sent a letter to Holcomb on Friday urging him to increase testing in Lake County, partly because of a disparity when compared with Marion County.

Lake County is Indiana’s second-most populated behind Marion County. It’s also second to Marion County in the number of COVID-19 deaths and cases.

As of Friday, Lake County had received 976 tests per 100,000 residents, compared with Marion County’s 1,822 tests per 100,000 people, according to the state testing data and 2019 population estimates from the U.S. Census Bureau.

Candelaria Reardon also called for the implementation of a tracking and tracing plan and a centralized and coordinated data system between the state, county and local health departments.

"It is important that data-driven guidelines are developed to get Hoosiers back to work safely while protecting vulnerable populations," she said.

A number of essential workers from Porter County have been tested at the state's drive-thru clinics in Lake County, including health care workers, first responders and grocery store employees, she said.

“The testing needs to be broader,” she said. “If we have people who are symptomatic at all and working around other people in the community, we need to be able to test them.”

Governor to renew Indiana's stay-at-home order through May 1

Gov. Eric Holcomb will renew his stay-at-home order at least one more time when the current directive expires Monday.

The filing in Lake Circuit Court offers a glimpse into the real estate undertakings of Wisniewski, 56, over the last several years in Northwest Indiana who has since been targeted by the FBI following a Times investigation into his tax sale dealings.

Dana Bachman, of the Indiana State Department of Health, takes a swab from Annie Cotton, of Hammond, at a COVID-19 drive-thru testing clinic Thursday at St. Timothy Community Church in Gary.

Indiana State Department of Health workers await the next patient during a COVID-19 testing clinic Thursday at St. Timothy Community Church in Gary.

Rebekah Polite, left, and Dana Bachman, of the Indiana State Department of Health, wait for people at a drive-thru COVID-19 testing clinic Thursday at St. Timothy Community Church in Gary.

Rebekah Polite, of the Indiana State Department of Health, talks to a motorist Thursday during drive-thru testing for COVID-19 at St. Timothy Community Church in Gary.