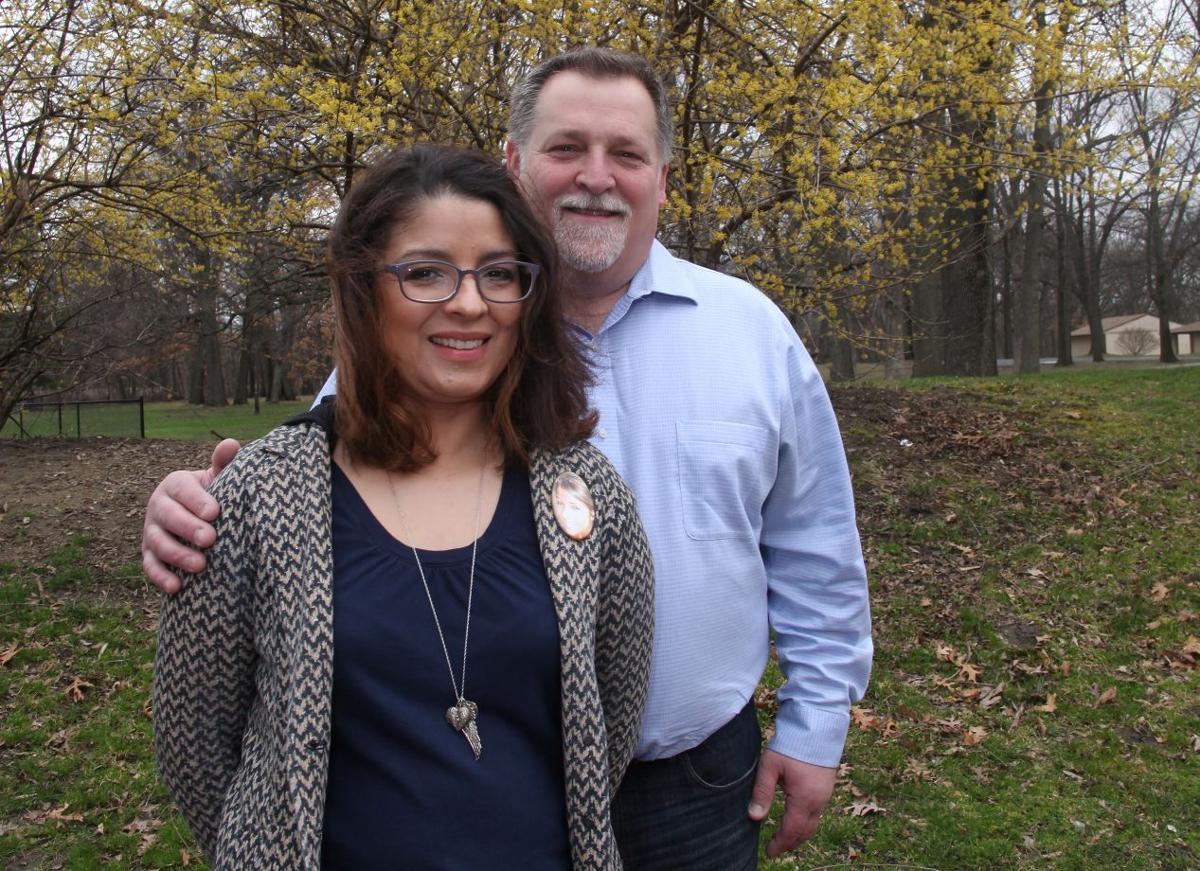 Bill and Sandy Bach acknowledge gratefully that “the Munster community really supported us through some tough times, and we’re honored to give back to the community.” 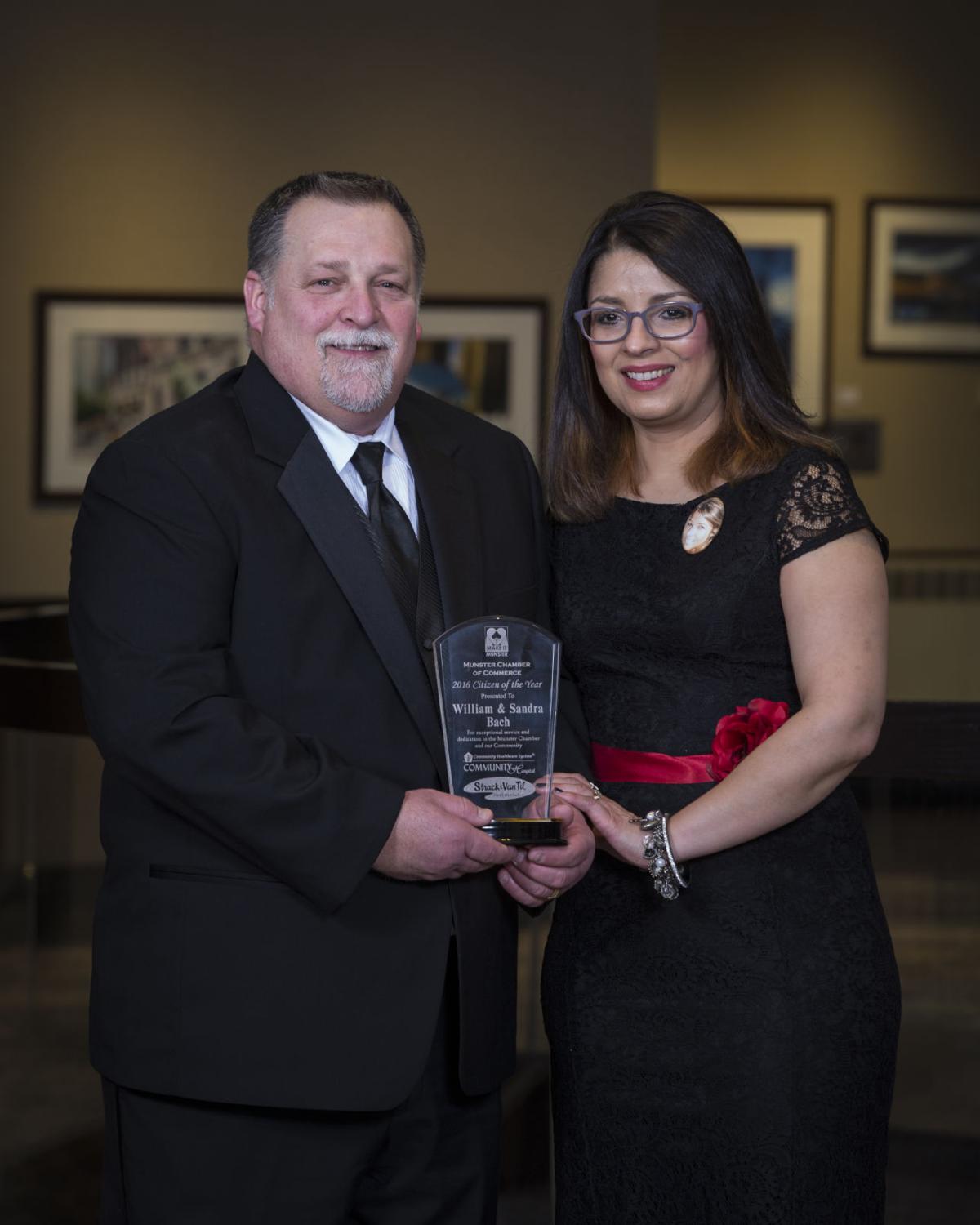 Bill and Sandy Bach were recently recognized for their work in the community when they were named 2016 Citizens of the Year by the Munster Chamber of Commerce.

Unlike the heroes in the popular Marvel movies, real-life community heroes don’t typically don capes and disguises. Local heroes—leaders in our community—do their good deeds in plain sight, yet in such a humble and seamless way that you’re unaware of the who behind community greatness. Two local heroes, Bill and Sandy Bach, were recently recognized for their work in the community when they were named 2016 Citizens of the Year by the Munster Chamber of Commerce.

Each year, a chamber committee made up of previous award recipients nominates a chamber member (or, as with the Bachs, two members) who best demonstrates the chamber’s core qualities of service and leadership in the community through exemplary community service that significantly impacts the long-term wellness of the community. “Bill and Sandy are amazing people,” says Wendy Mis, executive director of the Munster Chamber of Commerce. “Bill is a tireless volunteer for the chamber, and he asks questions that make the chamber a better organization. Sandy gives back to the community, too, and they’re both wonderful people to work with.”

“It’s nice to be recognized both for years of service and for being part of the community,” says Bill Bach, the chamber’s executive board treasurer and Strack and Van Til’s Munster store director. “There’s a long list of amazing, previous ‘Citizen of the Year’ award recipients, and I’m honored to be included on that list along with my wife, Sandy.” Bill credits Strack and Van Til for encouraging its store directors and employees to get involved in their local communities. “My time in the chamber, and in my community work, has allowed me to meet some really good people,” he says.

Bill is involved in a number of local nonprofits, such as the Munster Lions Club, which hosts popular yearly steak dinners and pancake breakfasts to raise money for the various local, state and international organizations which it supports. During the holiday season, you might even find Bill outside ringing a bell for the Salvation Army. He’s proud of every nonprofit organization he’s privileged to work with, but says, “My heart is in Munster Rotary. It provides a wonderful outlet for the business community to get together and get involved in the surrounding community. We raise money in the community and keep it in the community. The Munster Rotary has a thorough commitment to Munster.”

'Honored to Give Back'

Sandy’s passion for the community is expressed mainly through her involvement in and commitment to the Amanda Forum. The Amanda Forum is a program dedicated to raising awareness of and helping prevent dating violence; it’s named in honor of the Bach’s eldest daughter, Amanda, who was murdered in 2011 at the age of 19. Her former boyfriend was convicted of the crime and sentenced to 60 years in prison. “The Caring Place, a Valparaiso organization that assists domestic violence victims and their children, approached us in 2013 to ask if we’d be willing to start a program to educate youth about dating and break-up violence,” Sandy says. After taking some time to consider, they decided to go ahead with establishing the proposed program, and the Amanda Forum was established in September 2013.

The Amanda Forum, made up of an adult task force of Porter County professionals and a youth task force of high school student volunteers, hosts educational and mentoring workshops for youth, as well as campaigns and PSAs aimed at raising awareness of dating and break-up violence. Chalk the Walk is one of its most recent, successful campaigns, in which task force artists created sidewalk panel art in downtown Valparaiso with inspirational, educational messages for local teens and the community at large.

Sandy is encouraged by the positive impact the Amanda Forum is having. She recalls a recent workshop held at Valparaiso High School and how a group of male students were joking around but paid attention once they heard Amanda Bach’s story. “The student volunteers told the boys who Amanda was, explained the background of the Amanda Forum, and the reason why they were at the school,” she says. “Our volunteers are passionate about getting the word out.” Sandy is also appreciative of the Citizens of the Year award and what it represents. “The award recognizes and validates the importance of the Amanda Forum,” she says.

The Amanda Forum is set to expand its message beyond Porter County schools to include Lake County schools as well, thanks to a generous grant from Munster Rotary. “The Amanda Forum’s workshops are a healing way of giving back to the community, and help prevent domestic violence from happening to other families,” Mis says.

Bill and Sandy are grateful for the support that the Munster community offered their family, which includes daughter Sarah, after the tragic murder of Amanda. “The Munster community really supported us through some tough times, and we’re honored to give back to the community.”

The Amanda Forum – Established by the Caring Place and funded by a grant from the Porter County Women’s Impact fund, the Amanda Forum raises awareness of dating and break-up violence in teenagers and young adults. The Amanda Forum realizes that dating violence isn’t “just a girls’ issue” and promotes healthy dating environments of mutual respect, along with healthy ways of dealing with stress resulting from relationship issues.

Munster Rotary – The Munster Rotary is, as its Facebook page states, comprised of “ordinary people coming together to do extraordinary things.” The business and community leaders help the local, national and international community by using their leadership skills and experience to help the community have access to education, safety and health services.

Munster is an arts town.

Munster businesses reach out to others

There’s something to be said when a business gives back to the community. While some consider it an honorable gesture, many businesses conside…

Centennial Village to be a Munster destination

When the Town of Munster envisioned a community-oriented development on the intersection of 45th and Calumet avenues, Centennial Park was born…

Bill and Sandy Bach acknowledge gratefully that “the Munster community really supported us through some tough times, and we’re honored to give back to the community.”

Bill and Sandy Bach were recently recognized for their work in the community when they were named 2016 Citizens of the Year by the Munster Chamber of Commerce.