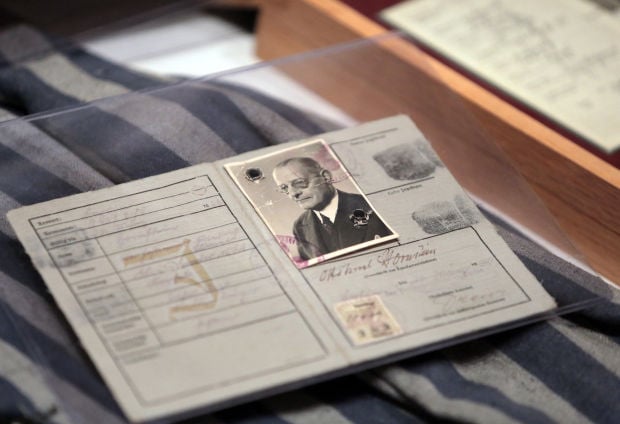 A Kennekart, an identification card Jews were required to carry, from the Illinois Holocaust Museum and Educational Center, is on display at a workshop for teachers at the Jewish Federation of Northwest Indiana in Munster. 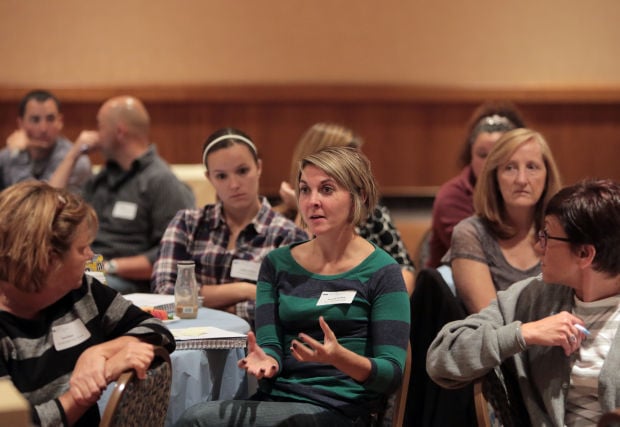 Local teachers participate in a workshop about educating students on the Holocaust at the Jewish Federation of Northwest Indiana in Munster. 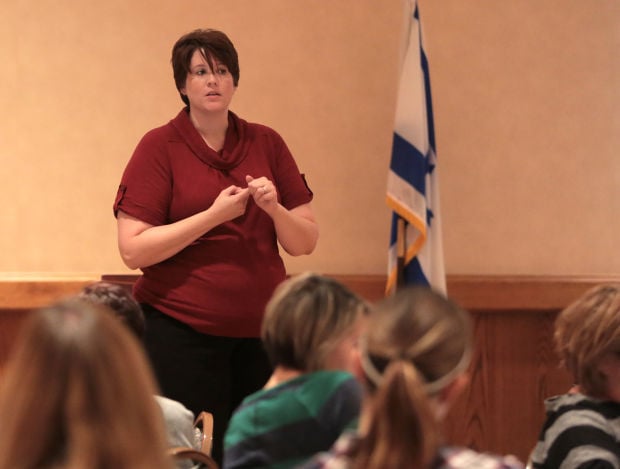 Kelley Szany conducts a workshop for local teachers about educating students on the Holocaust at the Jewish Federation of Northwest Indiana in Munster.

MUNSTER | Teaching today’s students about the Holocaust, anti-Semitism and genocide provides challenges for educators at all levels.

Dozens of teachers from public, private and parochial schools throughout Lake and Porter counties gathered Tuesday at the Jewish Federation of Northwest Indiana for Echoes and Reflections, a professional development workshop presented by the Illinois Holocaust Museum & Education Center based in Skokie.

House Bill 1059, passed by the Indiana General Assembly in 2007, mandates the teaching of the Holocaust in all Indiana schools.

“The Jewish Federation was instrumental in the passage of that bill to be sure that this horrific event never happens again, that the genocide that took place from 1937 to 1945 isn’t forgotten,” said Richard Sussman, chairman of the Jewish Community Relations Council and a second generation Holocaust survivor.

“My father escaped from Vienna, Austria, and then serving in the U.S. Army, went back (during World War II),” he said.

In addition to 6 million of the original 18 million European Jews killed during those years, the Nazi’s Final Solution killed millions of others in 32 groups including homosexuals, liberals, Gypsies and clergy who opposed the Third Reich, Sussman told those attending the workshop.

“Genocide continues today in Rwanda, the Sudan, with ISIS in Iraq and Syria,” he said. “(Teaching generations about what happened in Europe 70 years ago) is not just a passion. It’s a responsibility to accept others’ cultures.”

Throughout the daylong event, Kelley Szany of Schererville, director of educational outreach and genocide initiatives, and Chicago resident Amanda Friedeman, the Harvey L. Miller Family youth educator, provided the lessons and activities based on the curriculum developed at the museum.

Those topics included examples of anti-Semitism in Hitler’s writings and speeches, his “Final Solution” and those who chose to be perpetrators, collaborators and bystanders to the Holocaust.

“Genocide doesn’t happen in a vacuum. It’s an evolution. It’s a slow stripping away of rights,” Szany said. “Hundreds of thousands of people chose to be collaborators … Remember, not all Germans were Nazis and not all Nazis were German.”

Hitler succeeded, they said, because he began his propaganda campaign with youths. Propaganda continues today in many forms, Szany said.

“You need to understand ‘What’s the message?’ whether it’s a billboard on I-80/94 or older propaganda,” she said.

As an example, Szany and Friedeman asked the teachers to read selections from Hitler’s “Mein Kampf” published in 1923 and again in 1928 as well as the text of one of his most famous speeches.

“In the first book, you see examples of fear and anti-Semitism, scapegoating and religious undertones. Hitler portrays himself as a victim,” Szany pointed out. “In the second book, the Jew is seen as a parasite, something to be enslaved or controlled.”

After Hitler takes control of Germany, his rhetoric “grows in blaming the Jews for everything, calls for their annihilation,” she said. “If you’ve ever seen his speeches, Hitler is very theatrical. Hitler speaks as a prophet. The progression is religious, biological and racial.”

Hundreds of exhibits filled tables and the walls of the room to put faces and stories to those who perished. The items included the “Kennekarte” or identity cards all Jews had to carry and the various Star of David emblems that Jews were forced to wear.

Some teachers said their students were astounded by information about the Holocaust. Others said students found the lesson irrelevant.

One teacher shared that her students in a Gary school received a grant to visit the Holocaust Museum.

“They were very different after they visited the museum. I had never seen them so engaged,” she said.

Holocaust survivor shares history and a message with students

A Kennekart, an identification card Jews were required to carry, from the Illinois Holocaust Museum and Educational Center, is on display at a workshop for teachers at the Jewish Federation of Northwest Indiana in Munster.

Local teachers participate in a workshop about educating students on the Holocaust at the Jewish Federation of Northwest Indiana in Munster.

Kelley Szany conducts a workshop for local teachers about educating students on the Holocaust at the Jewish Federation of Northwest Indiana in Munster.