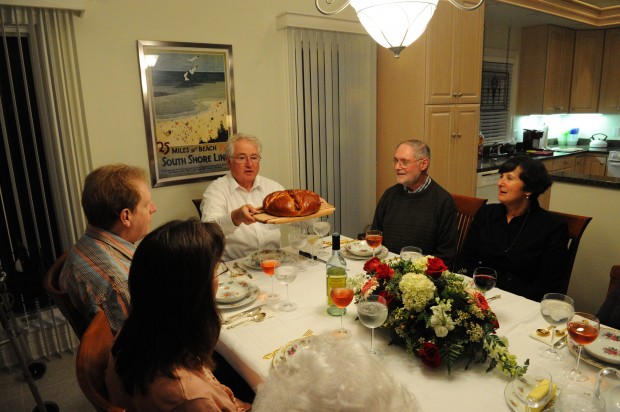 Host Henry Feinberg holds the challah while Rabbi Michael Stevens, second from right, gives a blessing during a Rosh Hashanah dinner with Susan and Michael Zweig, on left, and hostess Debbie Feinberg. 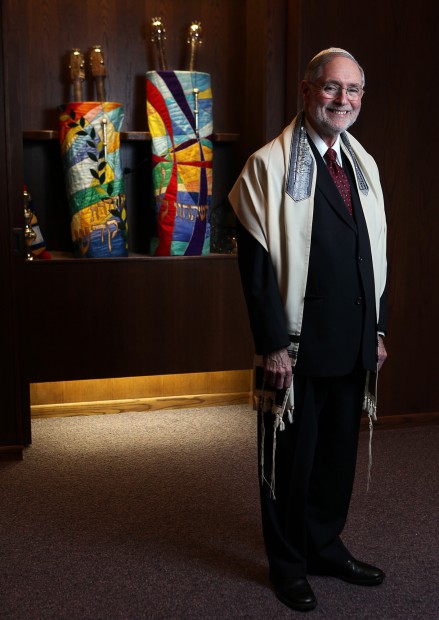 Temple Beth-El Rabbi Michael Stevens stands near two Torah scrolls from the synagogue's original location in Hammond at the current location in Munster. Stevens is set to retire after 25 years serving the reform congregation of Temple Beth-El.

MUNSTER | Sitting in the library at Temple Beth-El, Rabbi Michael Stevens reflected on his 36 years as a congregational rabbi and how music eventually led him to his calling.

“When I was growing up (in New York City), I thought about becoming a rabbi. But I thought I couldn’t because I wasn’t orthodox enough or observant enough,” said Stevens, who is set to retire after 25 years serving the reform congregation of Temple Beth-El.

Credited by other leaders of faith with tearing down walls between religious groups, the rabbi is scheduled to give his final sermon at 7:30 p.m. Friday.

The route he took to become a rabbi started with song.

His love of music took him to Haverford College in Pennsylvania in 1961 and then back to New York City’s Hunter College for his master’s degree in music composition. During his college years, Stevens played the bassoon as well as other instruments in his school’s band and orchestra.

For two years, he taught elementary school music in Brentwood, New York, about 40 miles from New York City. Then, as the Vietnam War heated up in 1968, his draft status changed to 1-A, or eligible for military service.

“I was called to Fort Hamilton in Brooklyn for a pre-induction physical exam,” Stevens said.

Rather than be drafted, he asked if he could enlist and play the bassoon in a U.S. Army band.

His musical ability gave him a three-year stint as a sergeant and faculty member of the Armed Forces School of Music in Norfolk, VA., and kept him from being deployed to Vietnam. Stevens said he became very active in the Norfolk Jewish community.

Teaching beckoned again when he returned to civilian life in 1971.

“I loved Judaism and teaching so much, I wanted to find a profession where I could enjoy both,” Stevens said.

He applied for faculty positions in music at more than 300 colleges and universities. One of those queries was for a teaching post at the Hebrew Union College-Jewish Institute of Religion in New York City.

Ordained in 1976 at the age of 33, Rabbi Stevens served a conservative Jewish congregation in Warren, Ohio, for five years followed by another five years in Montreal, Quebec, as the spiritual leader of a reform congregation.

While serving as interim rabbi in Allentown, Pa., Stevens read a newsletter article about an opening at Temple Beth-El in Hammond.

“I didn’t know where Hammond was, but I was aware of where Indiana is,” he said with a chuckle.

Now a quarter century later, Stevens said, “It’s been an extremely satisfying 25 years, and I’m trying to be quietly proud.”

During his tenure, the congregation of Temple Beth-El moved four times to its present location at 10001 Columbia Ave. in Munster. It celebrated its centennial in October.

In retirement, Stevens said he and his wife, Judy, will continue living in Schererville.

The Rev. Steve Conger, of Ridge United Methodist Church in Munster, credited Stevens with reaching across lines of faith during his long tenure.

“Mike’s a great guy," Conger said. "He does a great job in building bridges in the religious communities. He doesn’t recognize walls at all. I’ve enjoyed working with him, and he has made our community stronger.”

On July 6, Stevens will symbolically hand over rabbinical leadership at Temple Beth-El to Rabbi Leonard Zukrow, who is currently serving a congregation in Henderson, Nev.

Host Henry Feinberg holds the challah while Rabbi Michael Stevens, second from right, gives a blessing during a Rosh Hashanah dinner with Susan and Michael Zweig, on left, and hostess Debbie Feinberg.

Temple Beth-El Rabbi Michael Stevens stands near two Torah scrolls from the synagogue's original location in Hammond at the current location in Munster. Stevens is set to retire after 25 years serving the reform congregation of Temple Beth-El.