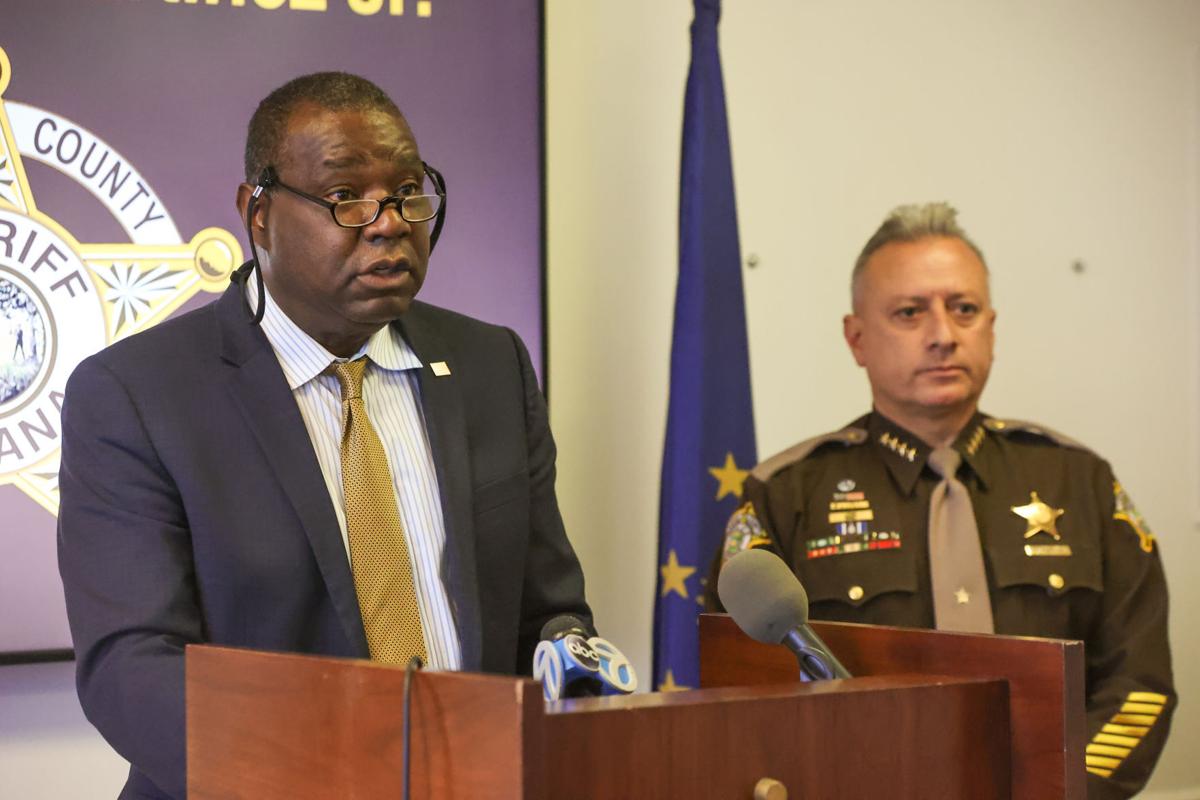 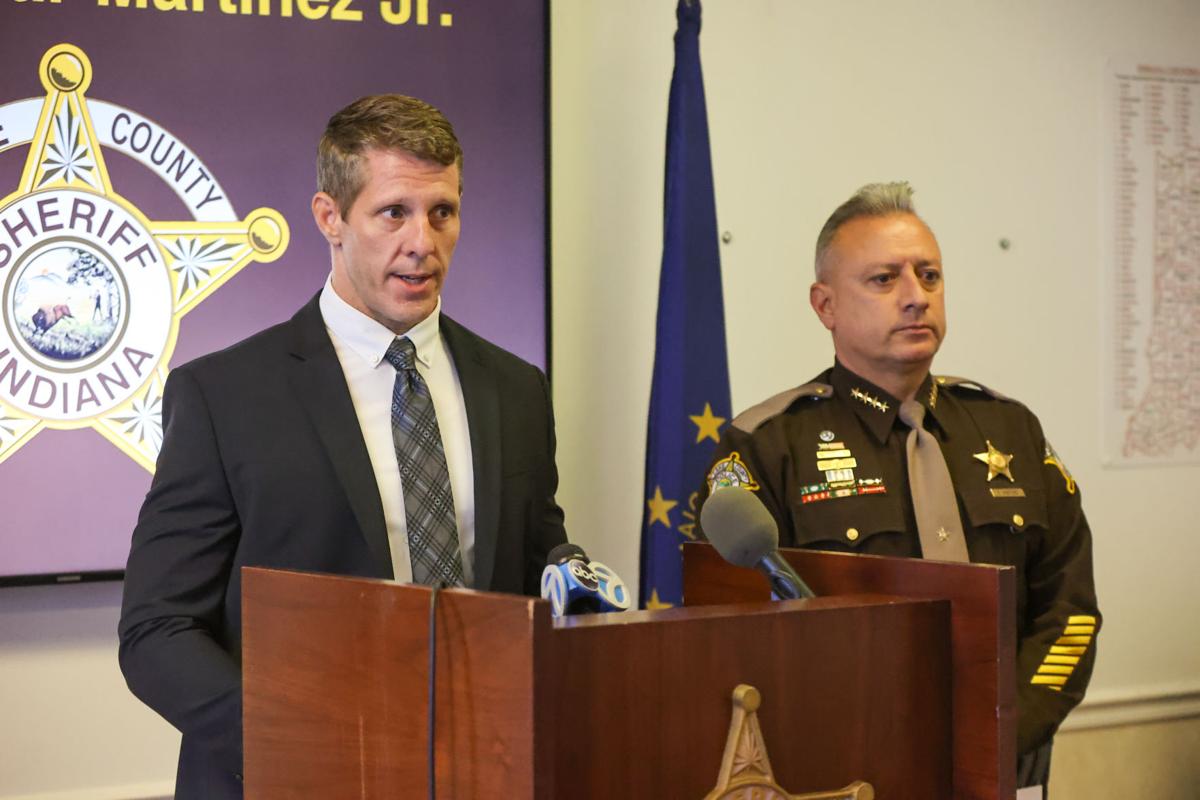 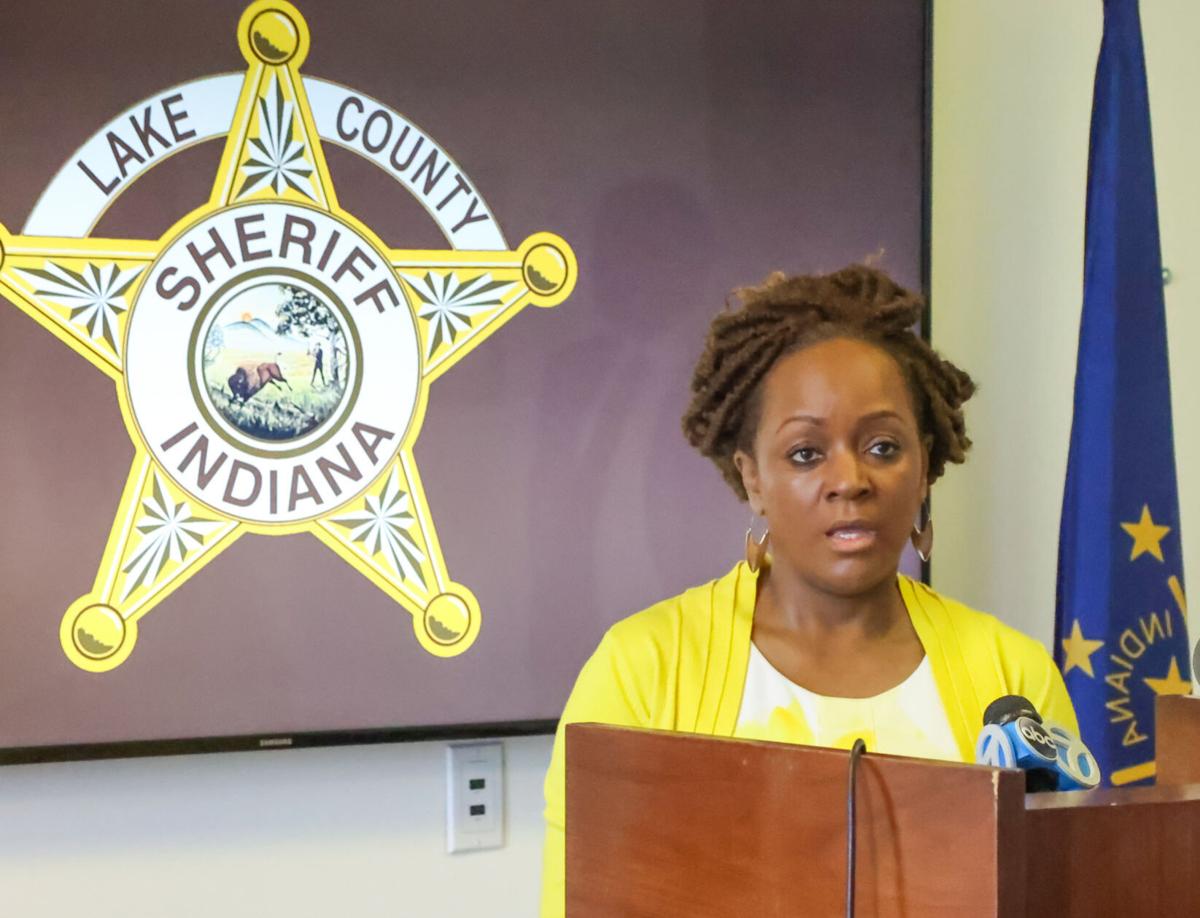 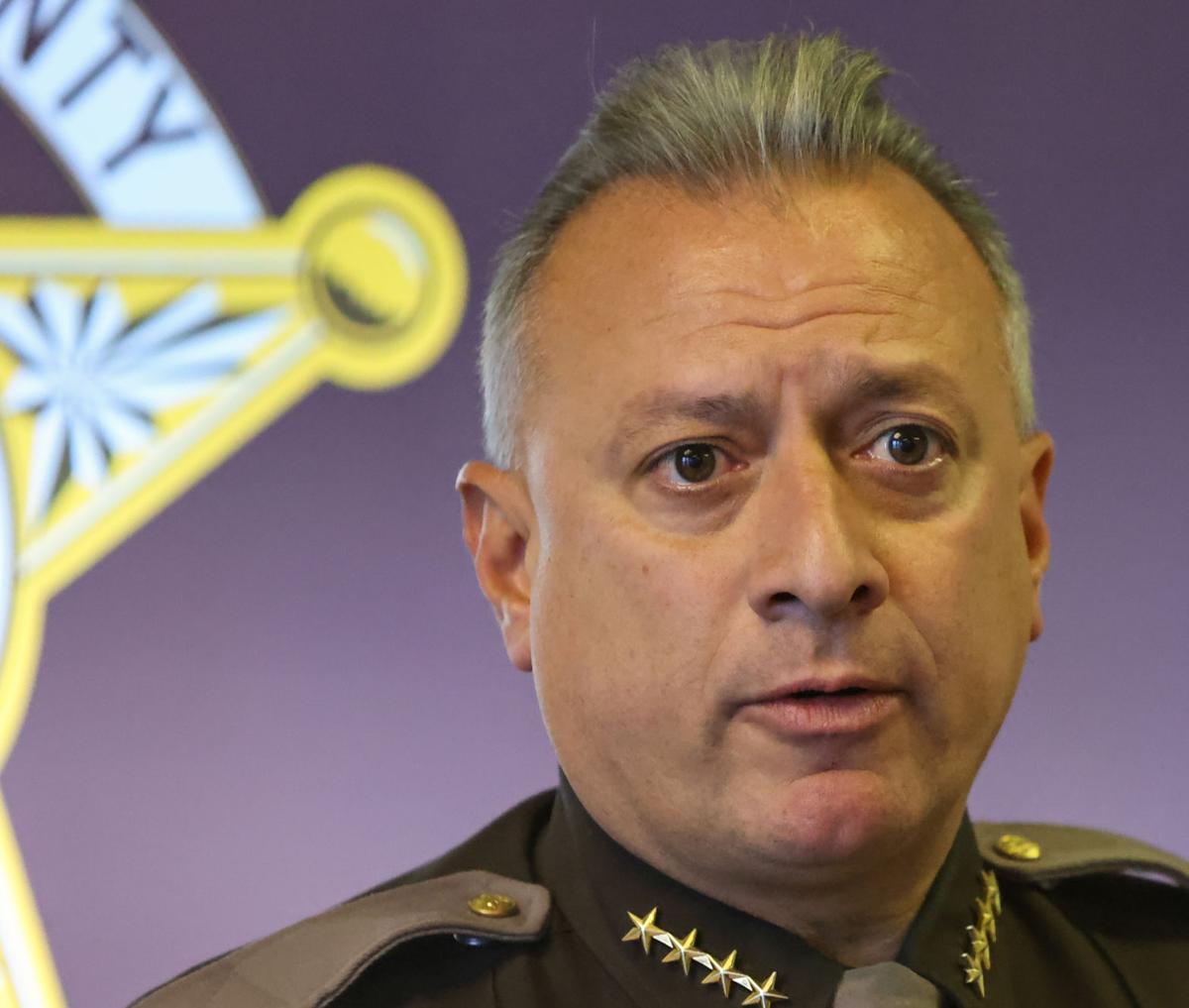 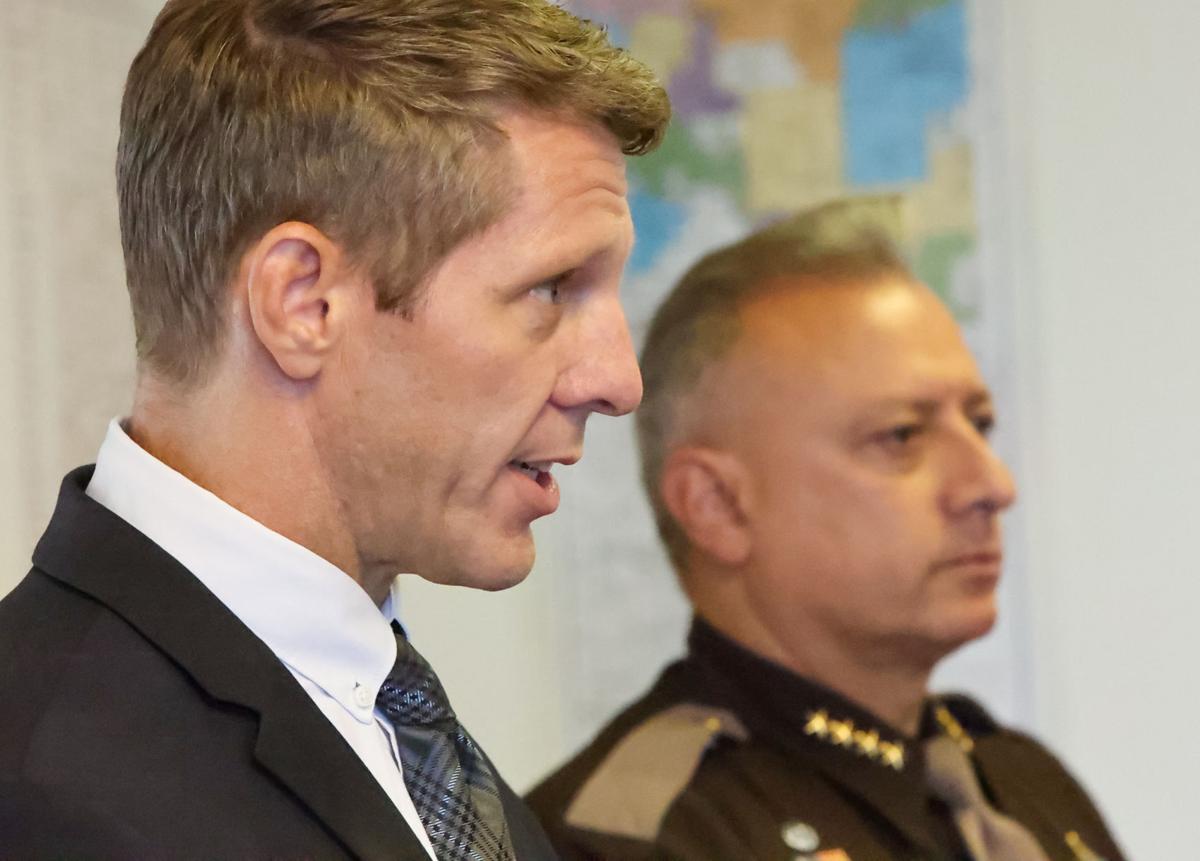 CROWN POINT — Lake County Prosecutor Bernard Carter said he won’t charge a Gary police officer with a crime in the fatal shooting of an 82-year-old black man two years ago.

Carter announced at a Thursday press conference a county grand jury delivered a verdict to not indict Officer Brandon D. Henderson on either murder or reckless homicide charges.

Henderson shot Melvin Bouler Nov. 17, 2019, while responding to a report of an intoxicated man with a weapon at an apartment in the 2400 block of Roosevelt Street in Gary’s Small Farms neighborhood.

Lake County Police Commander Michael R. Stewart told reporters a lengthy investigation disclosed that Bouler was intoxicated, armed with a handgun that he pointed at several people, and was threatening harm to them and himself before being confronted by Henderson.

Stewart said Henderson told county police that Bouler, who was sitting inside a car parked outside the apartment, pulled a silver revolver from his right jacket pocket and pointed the gun at him.

“Henderson reported that he feared for his life and commanded Bouler to drop the gun, but when Bouler did not comply with the command, Henderson fired his duty weapon several times through the front windshield of the vehicle toward Bouler, causing (Bouler) to drop the gun," Bouler said.

Investigators at the scene said they recovered a loaded chrome-colored .357 Magnum revolver from inside Bouler’s red Nissan Altima.

Bouler died Jan. 4, 2020, at a Chicago hospital of the six gunshot wounds.

Jamise Perkins, Henderson’s defense attorney, said at the press conference he and Henderson thank the county police and prosecutor’s office.

“Relief doesn’t begin to describe what Mr. Henderson feels," she said. "He still understands Mr. Bouler died and he is remorseful for this, but he had a weapon pointed at him and he had no other choice. He has been awaiting this for two years. He is grateful for the sheriff and the prosecutor. They didn’t leave any stone unturned and didn’t rush to judgment."

Robert L. Beeman, an attorney representing the Bouler family, said he is dissatisfied with the result of the grand jury probe.

Beeman said he is proceeding with a civil wrongful death in U.S. District Court in Hammond. “We will continue our discovery and unearth the real facts in the case."

The lawyers for the victim’s family allege city officials were negligent to employ Henderson, an eight-year veteran of the force, and that the department had practices that promoted "hyper-aggressive policing.”

Lawyers for the city of Gary have denied many of the claims in the federal suit and asserted they have immunity from the civil suit.

A Gary-based chapter of Black Lives Matter protested outside the prosecutor’s office last month, calling on authorities to hold someone responsible for Melvin Bouler’s death.

Lake County police investigated the shooting, at the request of Gary police, in late 2019 and early last year.

Lake County Prosecutor Bernard Carter said Thursday he opened a grand jury investigation into the shooting in May.

Grand jurors heard evidence in the case behind closed doors last month and early this month before issuing their verdict Thursday to not charge Henderson.

A 15-page summary of the probe, made public at Thursday’s press conference, states the two primary witnesses were Tashanda L. DeBerry, a stepdaughter and a professional home health aide caring for Melvin Bouler, and her boyfriend, Russ Stigger.

DeBerry told county police she had been caring for Bouler for the past eight years and he had been acting strangely three months prior to the incident.

She said Bouler was depressed about the deaths of his daughter and grandson and “how he didn’t have anything to live for and was going to kill himself.”

She said he made sexual advances toward her — which she did not reciprocate — while he was under the influence of alcohol. She said Bouler disliked her boyfriend, whom she said Bouler threatened the day before the incident, saying he was going to get a gun and shoot her and Stigger.

County police said they recovered Bouler’s cellphone and data showing that he had made a total of 114 calls to DeBerry’s phone on the day before and the day of the incident.

She said she started blocking Bouler’s calls to her, but did speak with him the morning of the incident to ask if he was feeling better.

She said Bouler replied he was hurt and had been up all night drinking and threatened that DeBerry and Stigger “were all going to die today.”

She testified Bouler arrived that evening at her apartment and was lying in the grass outside. She and Stigger walked up to him and she offered to call an ambulance, but he refused it. She said Bouler smelled of alcohol and she saw he had a gun on his right side.

DeBerry said Bouler stood up, pulled a silver gun from his right side and pointed the gun at Stigger “stating they were going to die tonight.” DeBerry and Stigger then fled inside to the apartment’s stairwell. They called 911 asking for police help.

She said she saw Henderson arrive in his police car, shine a flashlight inside Bouler’s car and shout at Bouler to show both of his hands were empty.

She said Bouler was sitting in the driver’s seat of his car when Henderson fired shots at Bouler.

County police said Stigger also saw Bouler carrying a gun, which he described as a blue steel revolver, and heard Bouler say he was going to kill himself.

Stigger said he called 911 after Bouler claimed he had three or four guns on him and was prepared to kill DeBerry.

Police said they found no other firearms at the scene.

Stigger said he then saw Bouler pull out what appeared to be a different gun than the one he saw earlier, a silver semi-automatic handgun with a black handle, that Bouler pointed at him and threatened to kill him.

He said he ducked behind a wall and Bouler didn’t shoot, but instead walked out to his car.

The report states Stigger "believes that Bouler (had) intent to kill because he came to DeBerry’s house with a gun after stewing over ... (two days)."

Henderson’s attorney, Perkins, said Henderson had been on active duty with the Gary police except for about 30 days while the grand jury investigation took place. She said Henderson will now return to active duty.

Father John Siekierski, who lives in the rectory just feet away from the building, said he was alerted by a member of the parish and came out to see the convent aflame.

EAST CHICAGO — A dispute between the city and a company renovating Block Stadium over employment quotas is prompting a lawsuit.

"As septic systems age they tend to fail," said Sam Weber, senior project manager at VS Engineering. "In this case, the need for a public sewer system is definitely considerable."

IDEM said in an inspection report released Wednesday it was referring U.S. Steel to its enforcement division, the U.S. EPA and U.S. Department of Justice for "appropriate action."

Martha "Marty" Wheeler, who has devoted the past several decades to saving and preserving the courthouse, was honored Thursday as a Sagamore of the Wabash.

In a meeting where the Hammond City Council approved a $90 million budget in short order, it was an amending ordinance regarding city employee…

As of 6 p.m. Saturday, police convened at a hotel near Southlake Mall to investigate.

The man has been tentatively identified as Douglas Charles Jones, 53, of Warsaw. The Lake County coroner's office is seeking information about the man's immediate family or relatives.