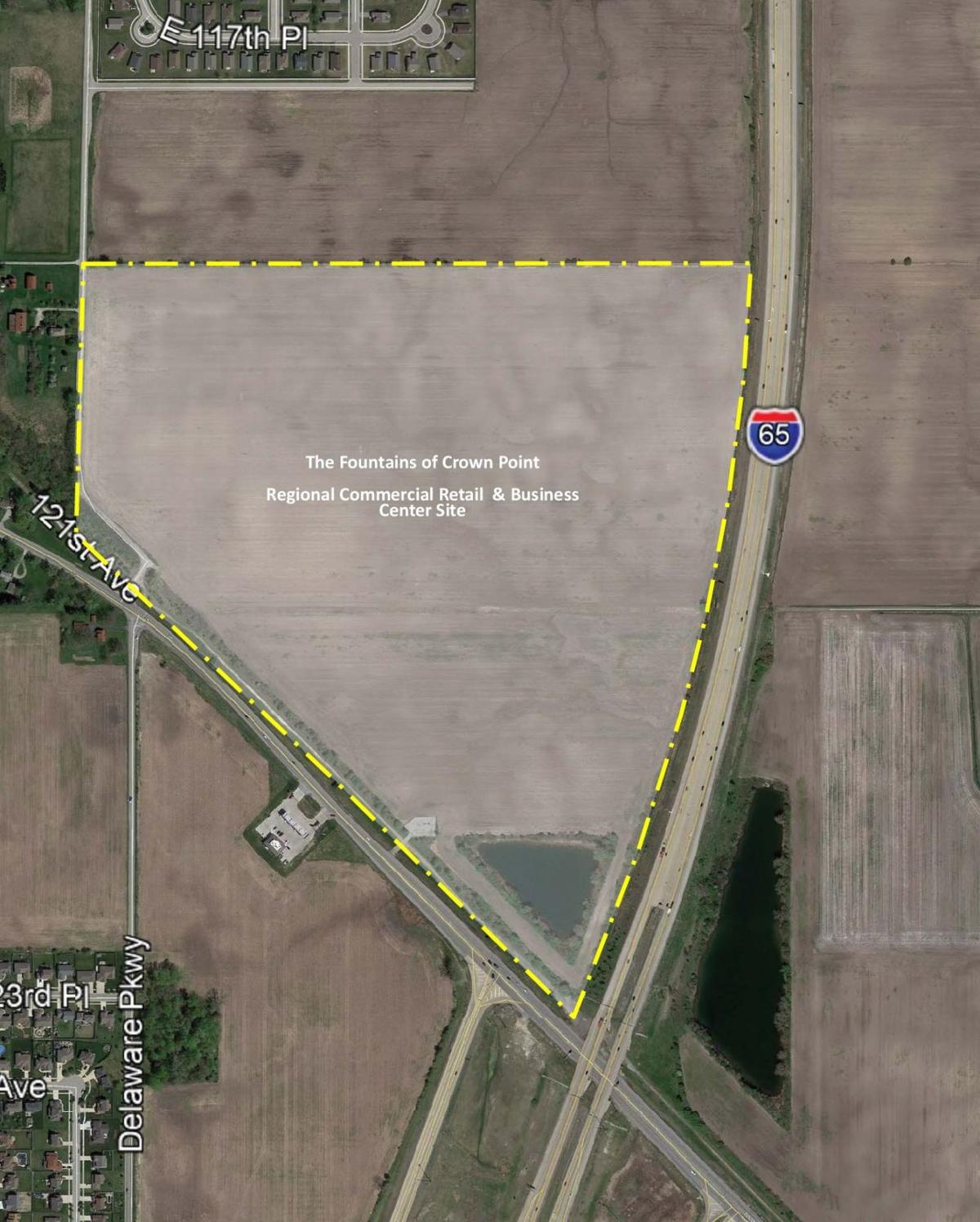 The Fountains of Crown Point would be located at the northwest corner of Interstate 65 and U.S. 231.

CROWN POINT — Retail and restaurant tenants for the $150 million to $250 million Fountains of Crown Point development could start being named in about six to nine months, officials say.

Developers hope to have a groundbreaking in two years for what is being called an unprecedented commercial retail center for the city that would occupy 109 acres at the northwest corner of Interstate 65 and U.S. 231.

The first thing developers needed to move forward was having the land rezoned to business from industrial, which the Plan Commission unanimously approved in March. That sent a favorable recommendation to the City Council.

The City Council at its recent meeting also unanimously approved on first reading the rezone for the project that calls for several hotels, a bowling alley, a theater, upscale and fast casual restaurants, a specialty grocery store, residential townhomes and a fire station.

Anchoring the development would be a premier outlet mall with 80 to 100 stores.

"We think it is important to rezone this so that we can provide new and complementary shopping and dining experiences and services to Crown Point residents," said Jeff Ban, principal of DVG Inc., the project representatives for the developer, CDP Partners LLC.

Ban said the project will provide significant real estate property taxes and payroll taxes to all units of government for funding public services to Crown Point residents and also will provide a large number of construction, retail, business and service industry and restaurant jobs.

"Zoning change is one of the most important first steps to be taken," he said.

Councilwoman Carol Drasga asked when it can be announced what tenants will be coming to the Fountains. She said there have been a lot of questions and interest regarding the project.

Ban said nobody is hiding any names at this point.

"There is interest," he said.

"But nobody is going to put a name on a dotted line to sign up until the community has rezoned this, and we've got a number of other things we need to do. In a six- to nine-month period, we should be starting to see some names."

The project calls for U.S. 231 to be widened and improvements made to the intersection of Delaware Parkway and U.S. 231.

Auto repair shop being proposed near Jewel-Osco in Crown Point

CROWN POINT — A blighted property owned by the city was sold last year with expectations that a new business will open on the site.The new bus…

CROWN POINT — A traffic signal is being proposed for 109th Avenue and Mississippi Street.

CROWN POINT — A Speedy Cafe restaurant that offers made-to-order food is coming to the Speedway gas station at 10950 Broadway.

When a proposed project would satiate the chief community goals of enhancing municipal revenue, increasing residents' quality of life and crea…

CROWN POINT — Developers hope to have a groundbreaking in two years for an "unprecedented" commercial retail center being planned for the city.

Thieneman puts its best homes forward at Wyndance in Winfleld

This April, Thieneman Homes is breaking ground on a new phase of its development in Wyndance, a lovely community in a beautifully landscaped s…

The Fountains of Crown Point would be located at the northwest corner of Interstate 65 and U.S. 231.