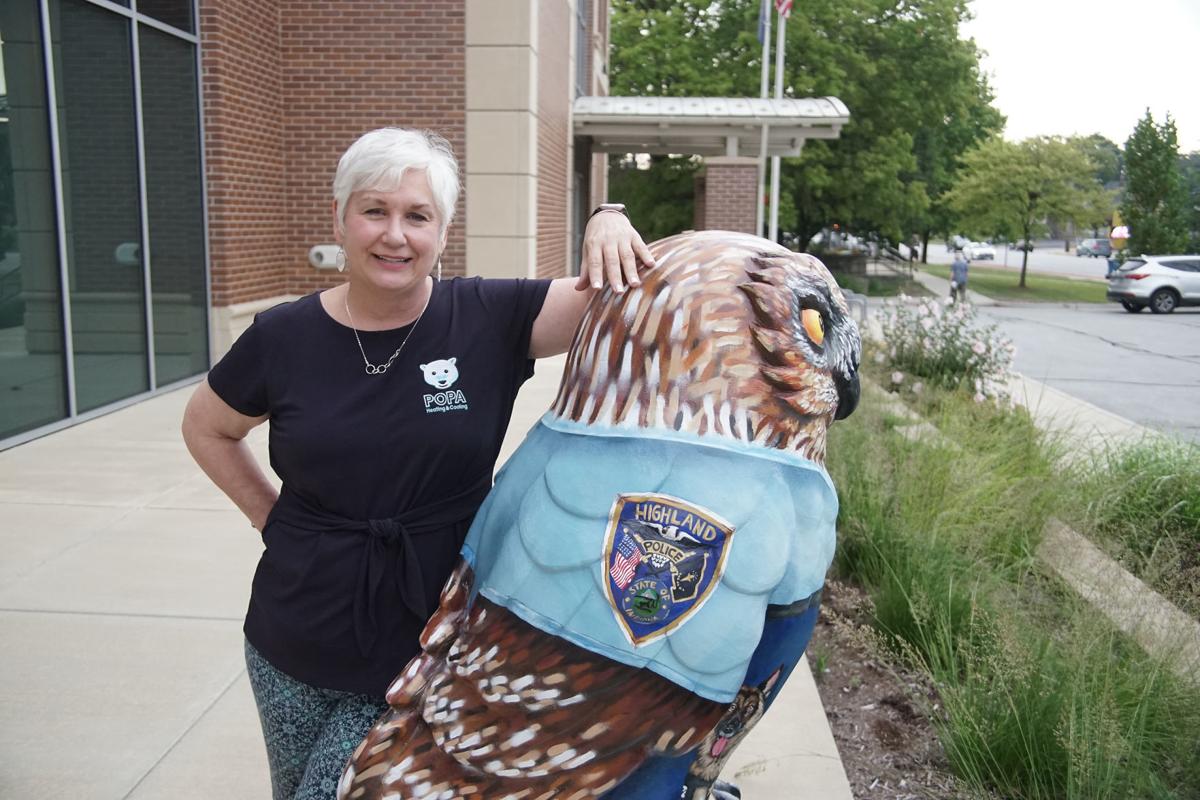 Pat Popa, owner of Popa Heating & Cooling, is one of the driving forces behind the Owl You Need is Love project. 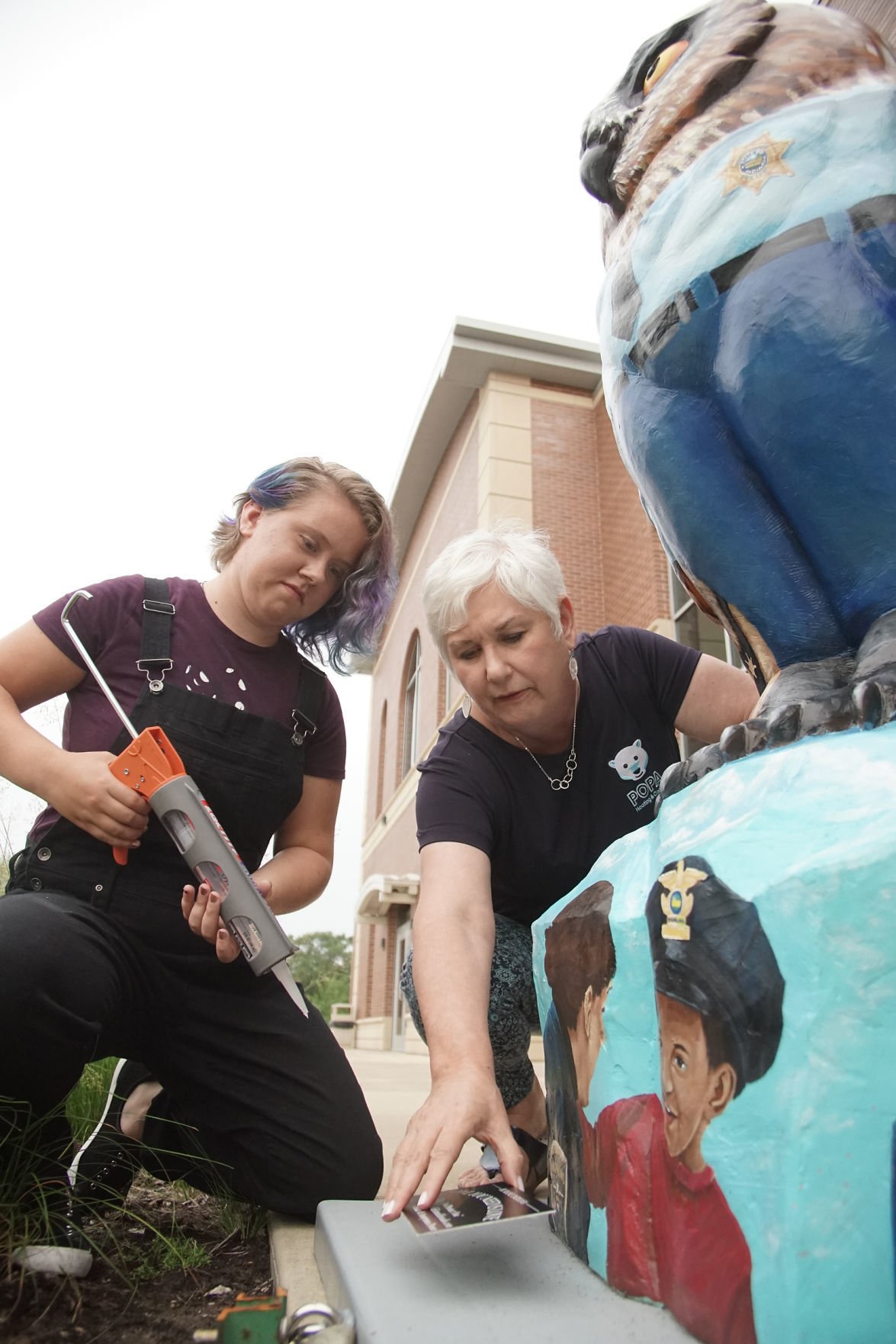 Courtney Smith works with Pat Popa to puts plaques with the theme and artists on installed owls. 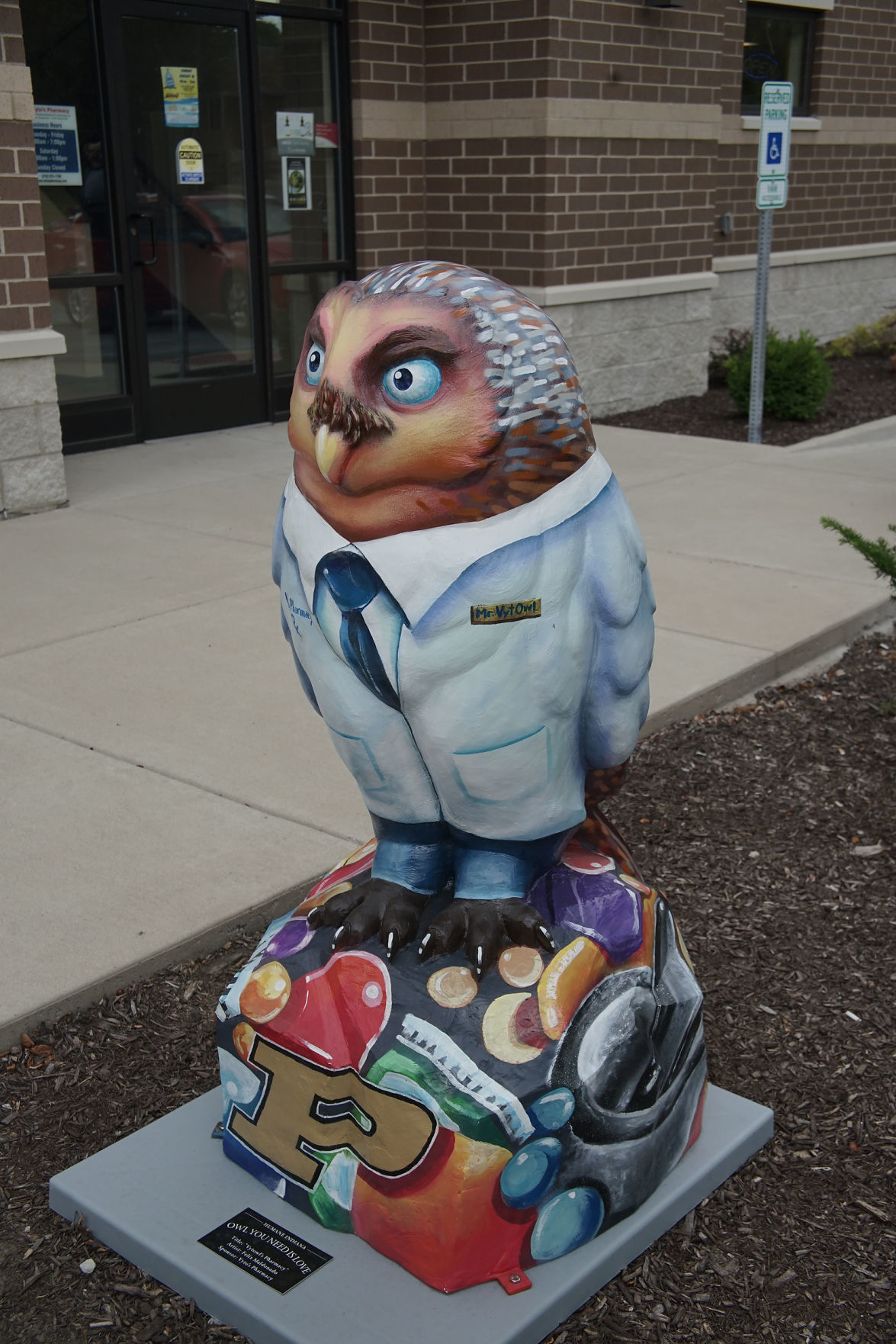 Felix Maldonado's owl painted like a pharmacist is on display at Vyto's Pharmacy. 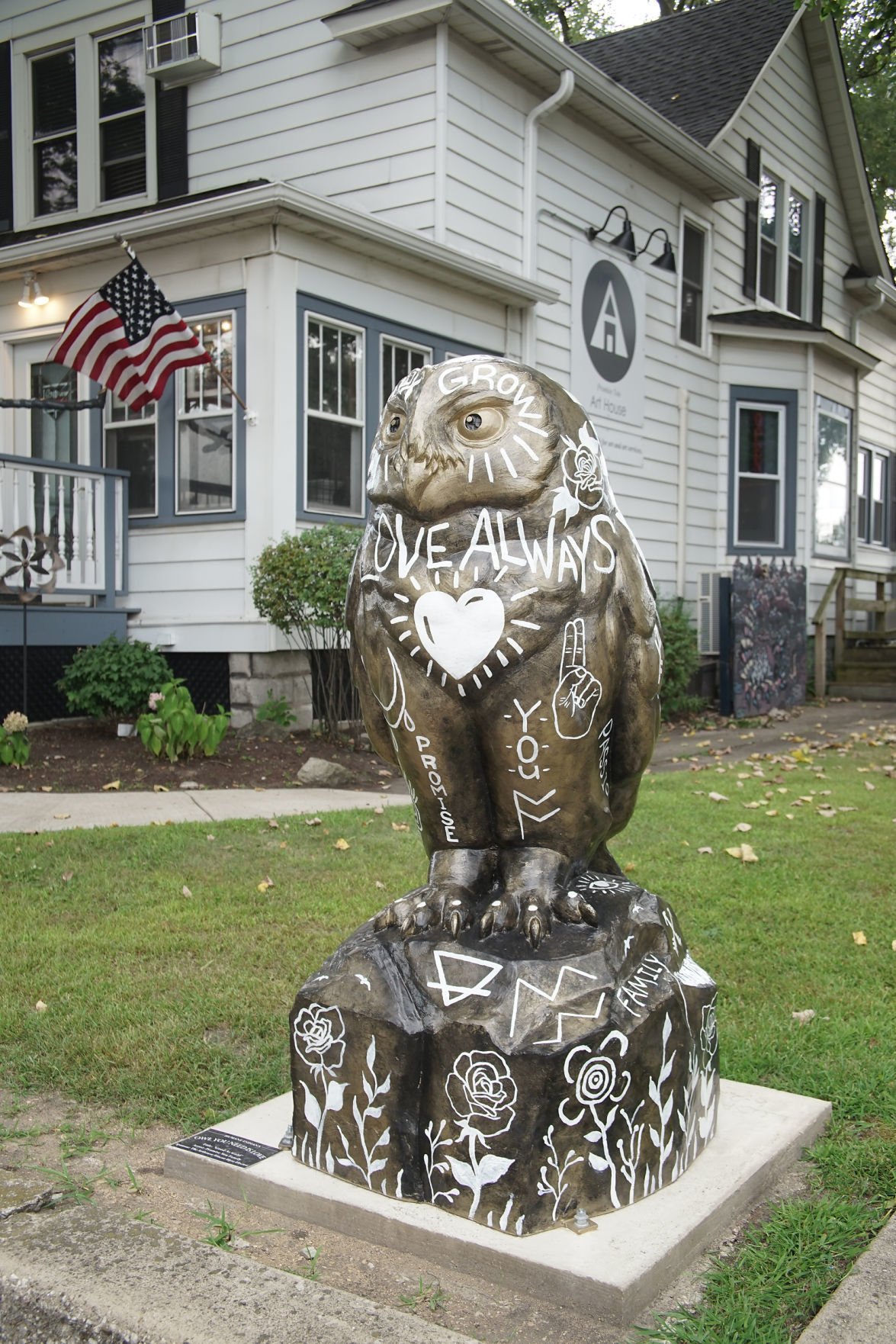 The owl in front of the Promise You Art House is one of 50 on exhibition in the Region. 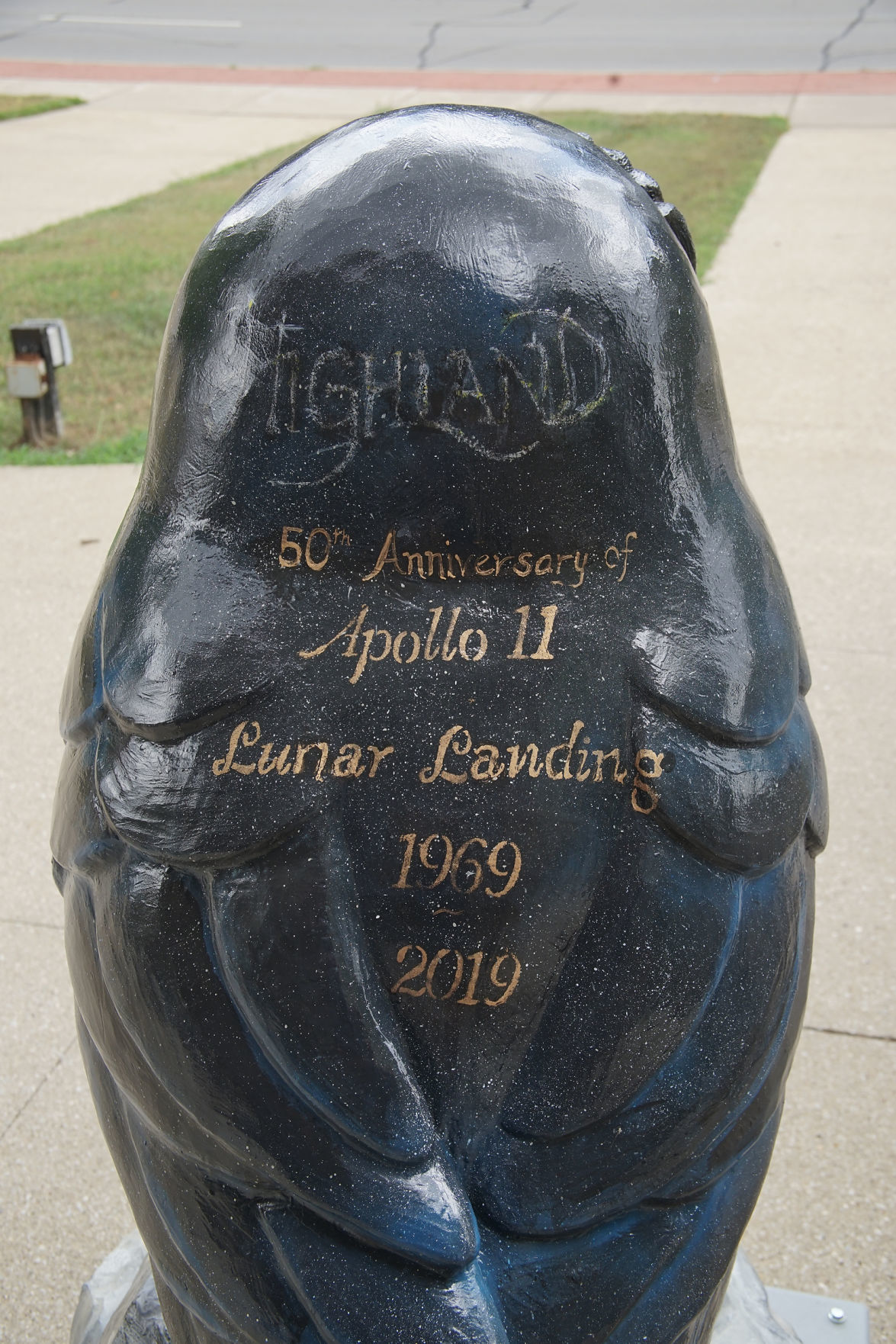 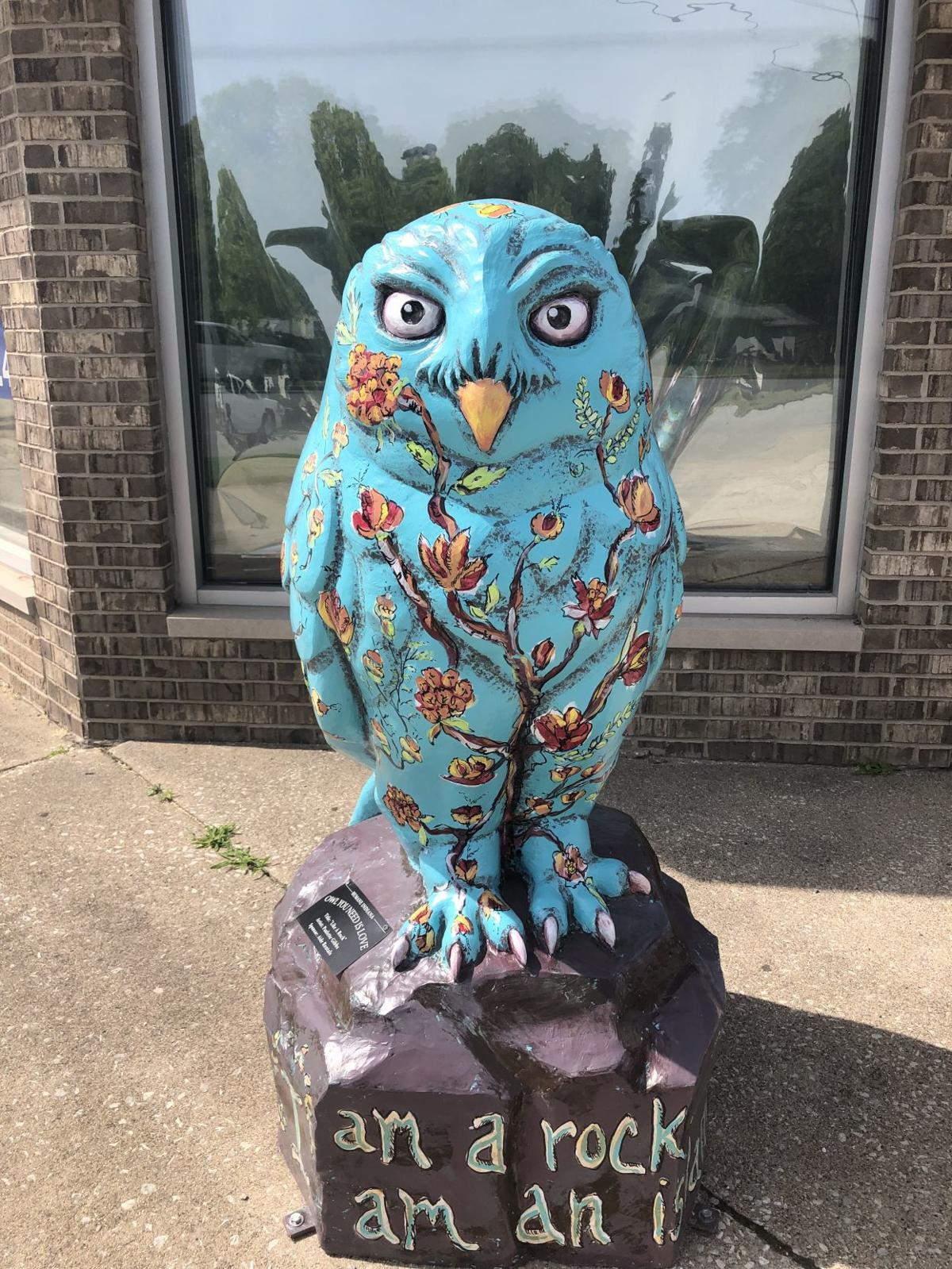 Artist Paulette Gibbs designed Like a Rock for Aide Rentals. 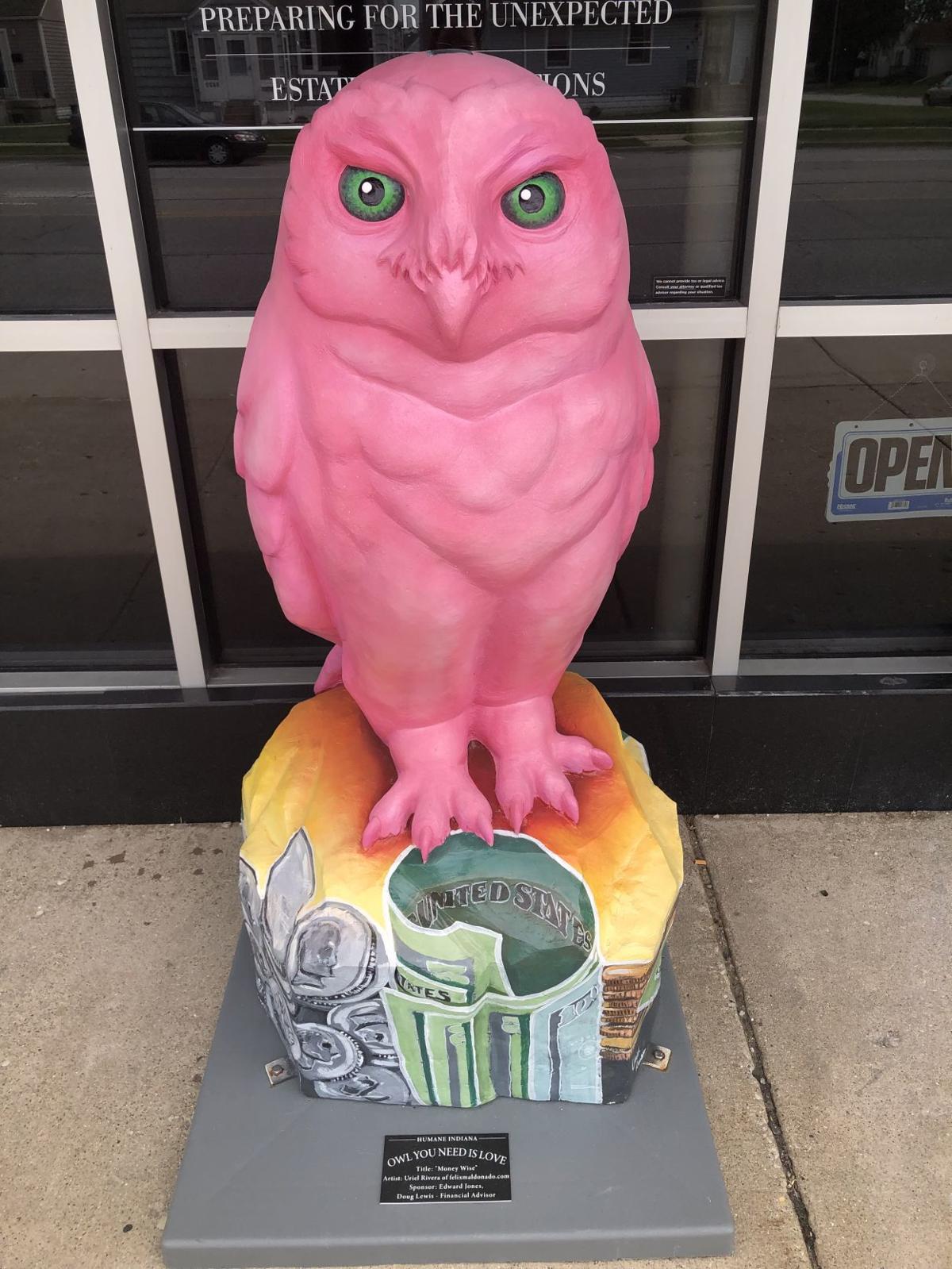 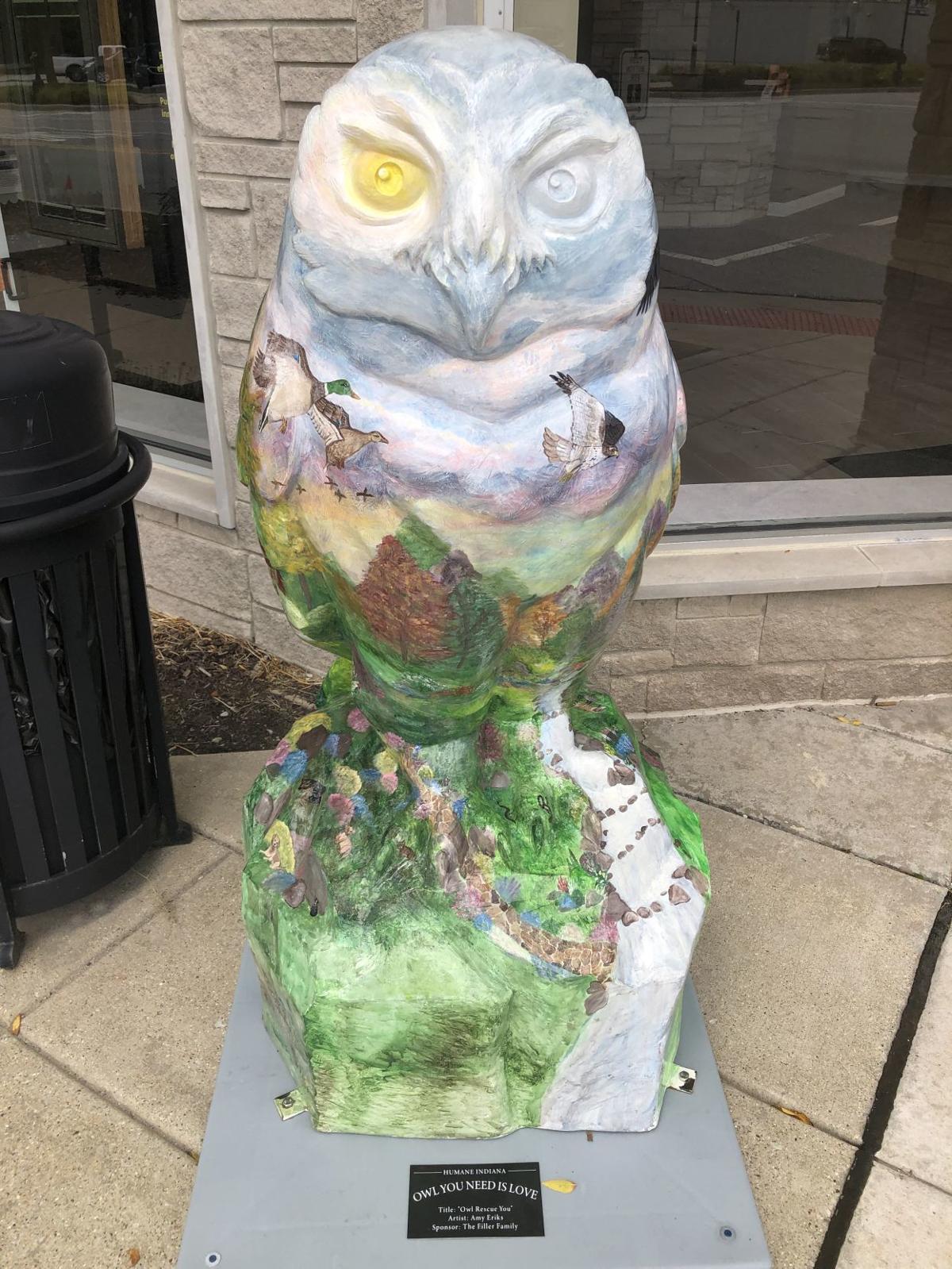 Amy Erik's "Owl Rescue You" is at the corner of Highway and Kennedy Avenues.

They weigh 50-60 pounds each and stand nearly as tall as actor Danny DeVito. Their colors, however, are definitely beyond nature.

They are part of Owl You Need is Love, a Northwest Indiana public art project, with area artists bringing fiberglass owls to creative life.

“We’re pretty excited about it. It’s remarkable how they stand out,” Highland Town Council member Steve Wagner says of the birds that are landing in town.

Pat Popa, owner of Popa Heating and Cooling in Highland and community booster, came up with the owl concept. She knows something about public art projects, starting with a two-week scarecrow display contest in 2001.

“It was such a big hit, I thought, why not do something that is sustained and on display longer?” Recent art projects have been the Bulldogs on the Square in Crown Point and the Highland Downtown Ducks. This year the nearly 50 painted owls will be on display in the Region until Oct. 15.

Popa’s inspiration took flight at Humane Indiana. “They have owls and people love to see and feed them,” says Popa. The nonprofit wildlife center on 28 acres in Valparaiso rehabilitates injured and orphaned wildlife, caring for them until they are ready to be returned to their natural habitat. Wildlife that can’t be returned remain at the center as “ambassadors” to the public.

Depending on the level of sponsorship participants chose, they can keep the commissioned owl or put it up for auction, with proceeds going to the wildlife center. The auction will be in mid-November, date and location to be announced.

Sponsors purchased the big fiberglass birds and provided themes and sometimes designs, choosing puns for some, including Owl Protect You.

“We were looking for something significant in our nation’s history," says Wagner of the Highland town council. "It’s the 50th anniversary of the Apollo 11 moon landing, so we wanted to recognize that. The art’s a pretty phenomenal job."

Businesses, individuals, and schools are sponsors. Schools have a special rate and the students have a two-hour educational assembly with wildlife brought in to show.

"This initiative is a unique way to bring schools, local businesses and artists together in the community to help the animals in Northwest Indiana," Brian Fitzpatrick, Humane Indiana's CEO, told The Times of Northwest Indiana in June.

Albert’s Diamond Jewelers has joined in the fun by designing a small charm for a necklace or bracelet with a little crystal chip for the eye of the owl. A silver charm is $195, a gold one $295, and proceeds go to Humane Indiana.

The owl’s locations will be on a map at humaneindiana.org.

The art of the owl

Jessica Haug, 35, participated in the mural painting on the Popa Heating & Cooling building in Highland.

That's how owner Pat Popa came to ask her to paint owls for the Owl You Need is Love project.

“I was excited to create work for Humane Indiana. I used to work at a nature center so it was cool to get an opportunity to work with that,” says Haug. She completed two owls, one for the Highland Town Council’s moon landing concept.

To create an outer space look, Haug used black paint with a deep blue tone dotted with stars. The theme of man stepping on the moon is depicted near the base, which is the moon. Astronaut Neil Armstrong’s famous  words — “That’s one small step for man, one giant leap for mankind” — are on the front of the owl.

Abbie Hoogeveen jumped at Popa's invitation to participate, painting three owls. “It’s so much fun, doing these projects with her. I’m inspired to create something out of three-dimensional objects. It’s not like a flat canvas; you can get different angles, 360 degrees all the way around. It’s challenging and fun.”

Two of her owls are at Frank Hammond Elementary School and Humane Indiana’s educational clinic, both in Munster. In August she was finishing the third owl. It’s in Dyer “in cool colors with elements of metallic,” says Hoogeveen, 41.

Felix Maldonado took on a flock of six owls. “So many that I had to create an apprenticeship program this summer in order to get them done.” Because the young apprentices used spray paint, “I knew using lot of it can cause cancer, so I wanted them to learn how to control spray paint,” says Maldonado.

Inspiration for his owls came from what each sponsor wanted combined with Maldonado’s ideas. He created the design, got it approved by the sponsor, and the apprentices went to work, with Maldonado’s help.

Each owl has a plaque that includes the apprentice’s name as well as his so they could be recognized for their work, says Maldonado, 47. The two Highland owls are at the Highland Police Department and Vyto’s Pharmacy.

When Erica Wolak was growing up in Highland, one of the things she looked forward to was the Fourth of July Festival.

Synergy is on the agenda in Highland. The town council, Highland Main Street, the Highland-Griffith Chamber of Commerce, and the development a…

Lorna Moore-Davidson, owner and founder of Ms. Elle’s Boutique in Highland, is making the world more fashionable one look at a time.

Despite some setbacks, Highland Rookery remains a bird-lover's paradise

Nestled between the heavy industry, steel mills and everyday hubbub of Northwest Indiana is a diamond in the rough. If one pays close attentio…

When School Town of Highland decided to provide eLearning to students at the start of last school year, the district had no idea how good its …

In addition to offering a variety of facilities, activities and programs, the Highland Parks and Recreation Department for years has been brin…

In 1922, Nicholas Leep, the son of immigrants who had moved from Netherlands to Chicago and then to Saskatchewan to help populate Western Cana…

Pat Popa, owner of Popa Heating & Cooling, is one of the driving forces behind the Owl You Need is Love project.

Courtney Smith works with Pat Popa to puts plaques with the theme and artists on installed owls.

Felix Maldonado's owl painted like a pharmacist is on display at Vyto's Pharmacy.

The owl in front of the Promise You Art House is one of 50 on exhibition in the Region.

Artist Paulette Gibbs designed Like a Rock for Aide Rentals.

Amy Erik's "Owl Rescue You" is at the corner of Highway and Kennedy Avenues.