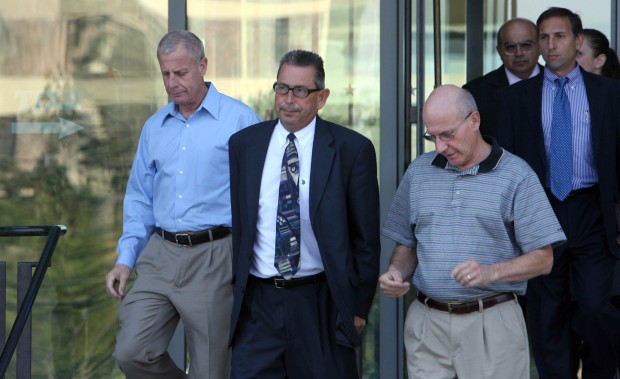 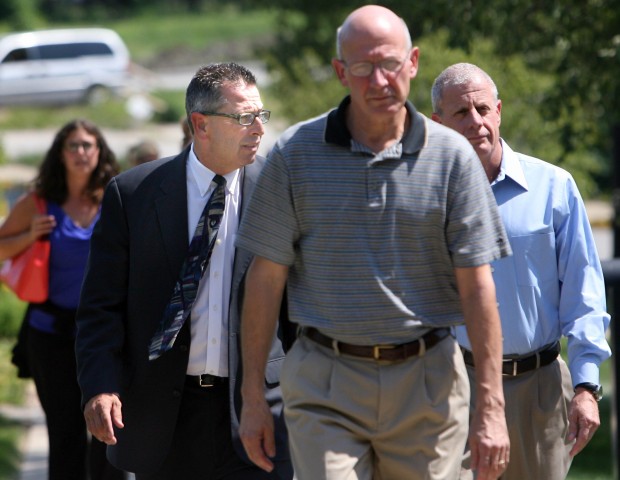 Thomas Philpot, left, enters the federal courthouse in Hammond on Friday following a lunch break to await the jury verdict in his fraud trial. 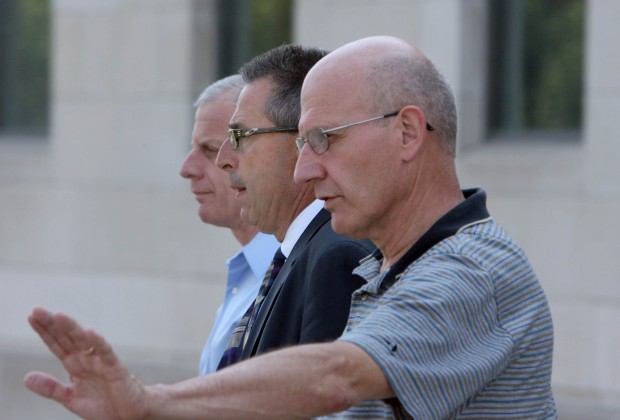 Thomas Philpot, center, leaves the federal courthouse in Hammond on Friday after being found guilty in his fraud trial.

The five-man, seven-woman jury took little more than three hours to reject defense pleas Philpot was the victim of an honest mistake and bad legal advice that led him to violate an obscure state law when he pocketed more than $24,000 from Indiana's federally funded child support incentive funds. He controlled the funds between 2004 and 2009 while serving as Lake County clerk.

That law forbids elected officials from giving themselves such bonuses without the approval of the seven-member fiscal body called the County Council.

Instead, jurors agreed the 54-year-old Highland lawyer was guilty of five felony counts that carry a maximum penalty of up to 20 years in prison. Senior U.S. District Court Judge James Moody released Philpot on bond and hasn't yet set a sentencing date.

Philpot didn't take the witness stand during his five-day trial, but his lawyers, Theodore Poulos, of Munster, and Leonard Goodman, of Chicago, argued Philpot deserved the benefit of reasonable doubt because Philpot's former lawyer, David Saks, erroneously advised Philpot he was within the law.

They said Philpot returned the money, with interest, two years ago when he learned of the error.

"Is it a federal crime not to know all the statutes in the law books? He was trying to do the right thing. That's the essence of good faith," Goodman said.

"Take into consideration his education, training, his intelligence. How could someone who had been in office for a decade think he could pay himself whatever he wants, whenever he wants?

"The taxpayers trusted the defendant as a lawyer, a doctor and a two-term coroner. He stole money from them," Benson said.

Benson said state Rep. Shelli Vandenburgh deserves the credit of being the first to warn Philpot in 2004 that child support incentive money was only to be paid to employees doing the work, not to administrators.

Vandenburgh said Philpot ignored her advice and took the majority of the incentive grant, giving only a small amount to the workers. Benson said Philpot's greed was evidence of his guilt. "Follow the money, ladies and gentlemen," he told jurors.

Vandenburgh said she warned Philpot again in 2007 that state officials were balking at the bonus scheme. Philpot didn't take a bonus that year. Vandenburgh left the clerk's office shortly afterward to run for the state Legislature.

"She is running for re-election and did the best she could to deflect blame to protect her political career and dump on Tom Philpot," he said. Benson countered, "She did the right thing."

Benson said Philpot attempted to get the bonus scheme approved by hiding it in an innocuous transfer request he had put on the council's agenda in 2008. But Councilwoman Christine Cid, an opponent of supplemental pay for favored officials and employees, warned she would oppose the measure. Philpot withdrew the request from the council's agenda.

Benson said Philpot took a final bonus in 2009 before resigning as clerk to become county coroner. "It was a money grab before he left office," Benson said.

Hammond Mayor Thomas McDermott Jr., commented on the case Friday, "I hate do say it, but if you are an elected official, charged with a crime, there is a presumption of guilt. You have to present a case. If you don't, the voters and jury think you are hiding."

Frey ready to step in as next Lake County coroner

Thomas Philpot, left, enters the federal courthouse in Hammond on Friday following a lunch break to await the jury verdict in his fraud trial.

Thomas Philpot, center, leaves the federal courthouse in Hammond on Friday after being found guilty in his fraud trial.