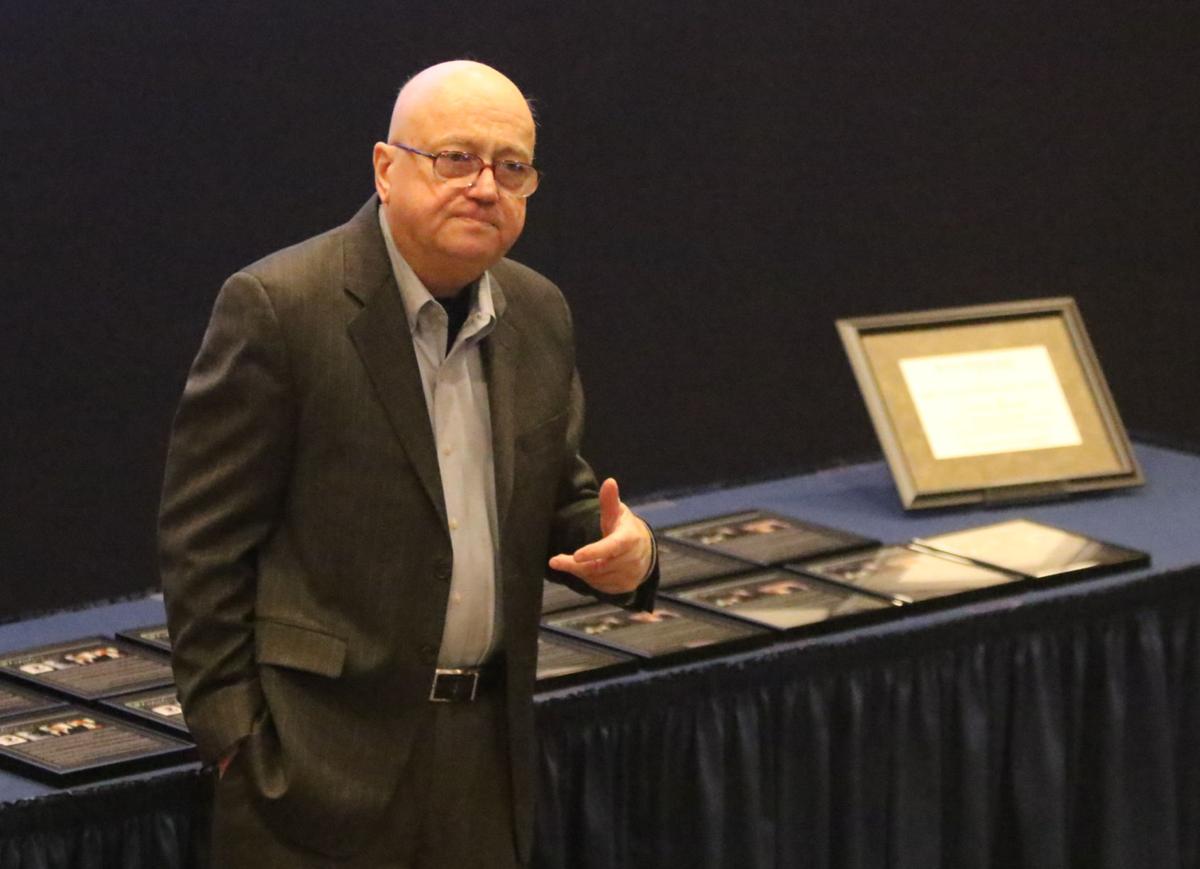 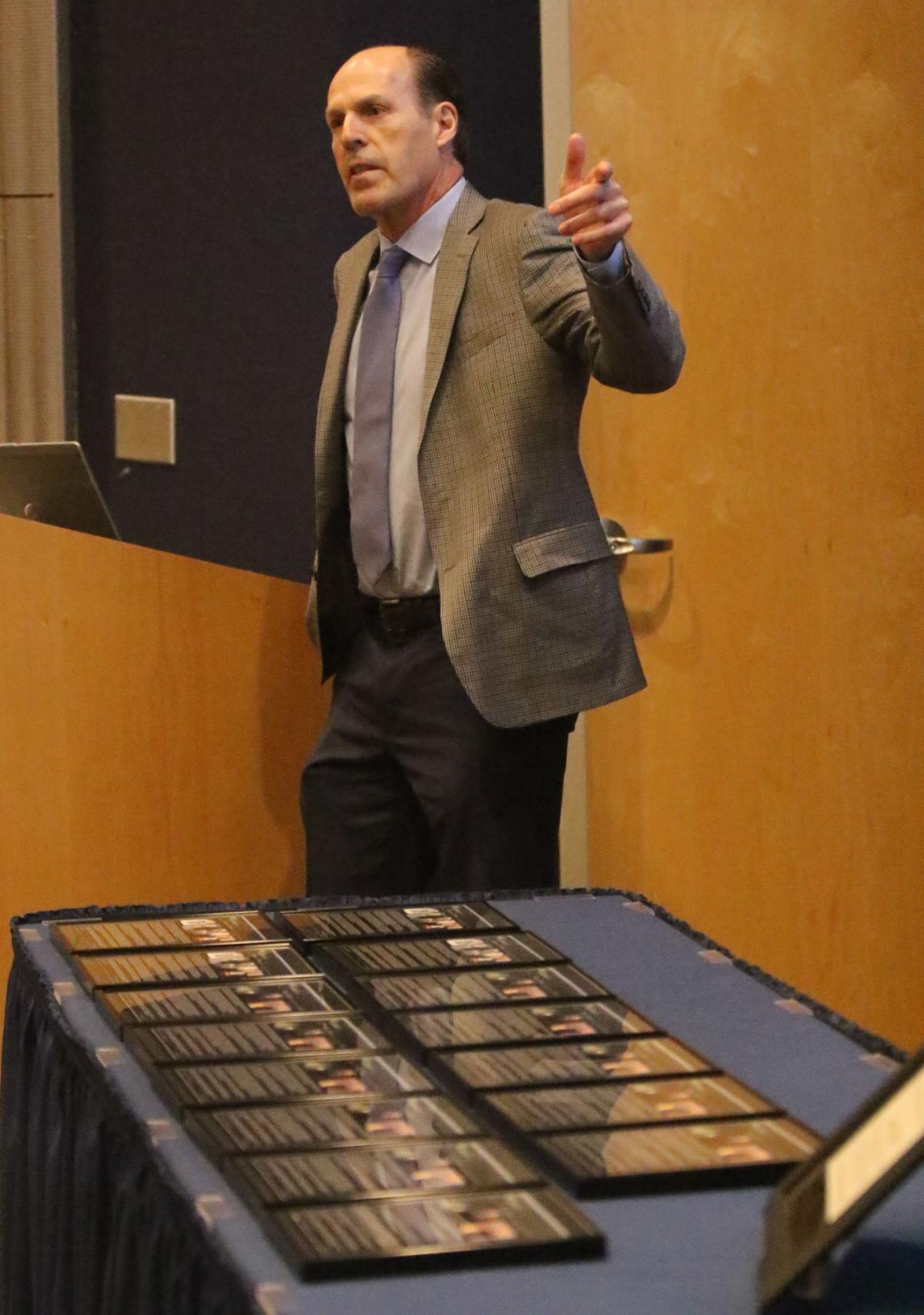 Craig White talks Thursday about his father, inductee Dean White, at the South Shore Wall of Legends ceremony at the Indiana Welcome Center.

HAMMOND — During their lifetimes, Quentin P. Smith, of Gary, and Dean V. White, of Merrillville and Crown Point, made contributions that transformed life throughout Northwest Indiana, touching tens of thousands of people.

On Thursday, family and friends gathered at the Indiana Welcome Center to celebrate the life and legacy of these men called “giants in Northwest Indiana” as the 69th and 70th inductees to the South Shore Wall of Legends. BP Whiting Business Unit sponsors the South Shore Wall of Legends where portraits of homegrown heroes, inventors and visionaries showcase the values of Exploration, Courage, Creativity and Innovation.

“This is about greatness. Not just to recognize it, but to push it forward. That’s our responsibility,” said John Davies, founder and coordinator of this annual project.

“It is too important for one generation. It must continue,” Davies said, recognizing six high school students and members of the ECIER Foundation who sat in the front row of the auditorium.

As members of the audience learned, Smith joined the U.S. Army at the beginning of World War II and was assigned to the 477th Bomber Group, part of an experimental program at the Tuskegee Institute in Alabama to train African-American pilots. They would later become famous as the Tuskegee Airmen.

At the end of the war, Lieutenant Smith and other Tuskegee Airmen officers were arrested and court-martialed for entering an officer’s club which was off-limits to African-Americans. Smith and 30 fellow officers chose imprisonment rather than honorable discharge. Thurgood Marshall, who would later become the first African-American Justice of the U.S. Supreme Court, filed a petition with the Supreme Court to free the imprisoned Tuskegee Airmen. President Harry S. Truman ordered all of the airmen freed and honorably discharged.

After the war, Smith returned to Gary where he began a distinguished career spanning nearly 50 years as an educator and active community member.

“He is a legend of America,” said Gregory S. Reising, who nominated Smith for the honor.

Ken Rapier, president of the Chicago “DODO” Chapter of Tuskegee Airmen Inc., addressed the students, encouraging them to look in the mirror every morning and repeat the Tuskegee slogan — “With courage and determination you can overcome adversity.”

Dean White “cast a legacy across Northwest Indiana as an entrepreneur, visionary and philanthropist,” Davies said about the billionaire who helped develop expanses of land through hotel construction, ownership and management, defining the skyline in many cities, including Indianapolis.

White’s youngest child, Craig White, flew in for the ceremony from Park City, Utah, and remembered his father having “a twinkle in his eye.”

Craig White recalled driving around Crown Point with his dad, who pointed out areas he wanted to development or had already developed.

“I wondered, ‘When does this guy ever sleep’…He was driven and he loved to see development,” Craig White said.

During the induction ceremony, Jason Besse, of Cedar Lake, a first-year nursing student at Purdue University Northwest received the 14th annual Legends Scholar award. The $1,000 scholarship from First Midwest Bank and managed by Legacy Foundation honors students who exemplify the Legends values in striving for a college degree, Davies said.

“We have been honored to be part of this great project in sponsoring an annual scholarship to shape the next generation who are the future of our region,” said Marti Rivas-Ramos, First Midwest Bank vice president and Munster branch manager.

A panel of judges representing the seven counties of Northwest Indiana selected Smith and White in a tradition that dates back to 2004. That’s when the Wall of Legends was established to celebrate “global difference makers” across all sectors of the public, private and nonprofit space,” Davies said.

3 inductees into Wall of Legends helped shape NWI, the nation

HAMMOND — Since 2004, the South Shore Convention & Visitors Authority has been honoring legendary people in Northwest Indiana.

South Shore Wall of Legends: Region residents who made the world a better place

The South Shore Wall of Legends was born in 2004 to honor the many Region residents who helped to make the world a better place. Here are thos…

New South Shore Legend Quentin P. Smith from the pages of The Times

Tuskegee Airman Quentin Smith, who was raised and taught in Gary, will be inducted posthumously into the South Shore Wall of Legends.

They span every county in the northwestern section of Indiana with life stories of valor, genius and innovation.

Craig White talks Thursday about his father, inductee Dean White, at the South Shore Wall of Legends ceremony at the Indiana Welcome Center.