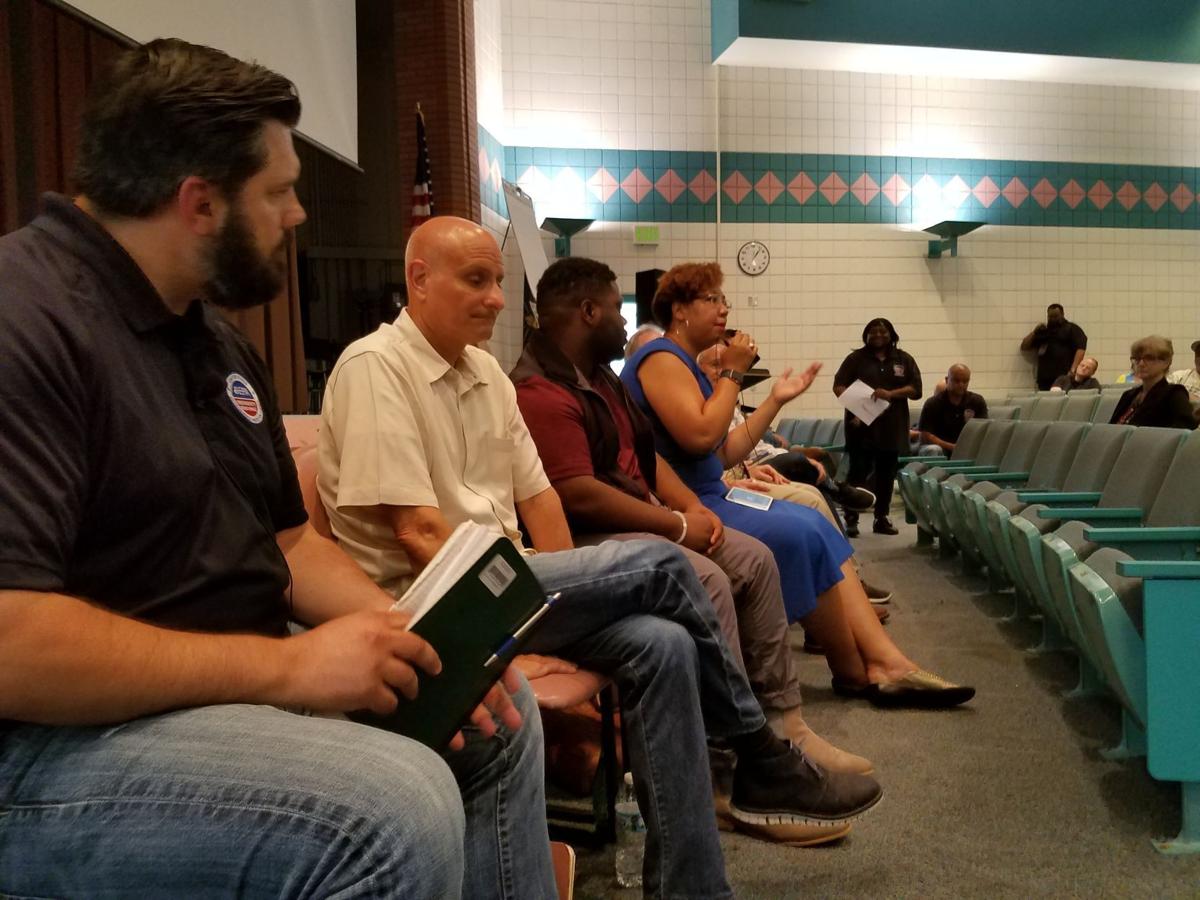 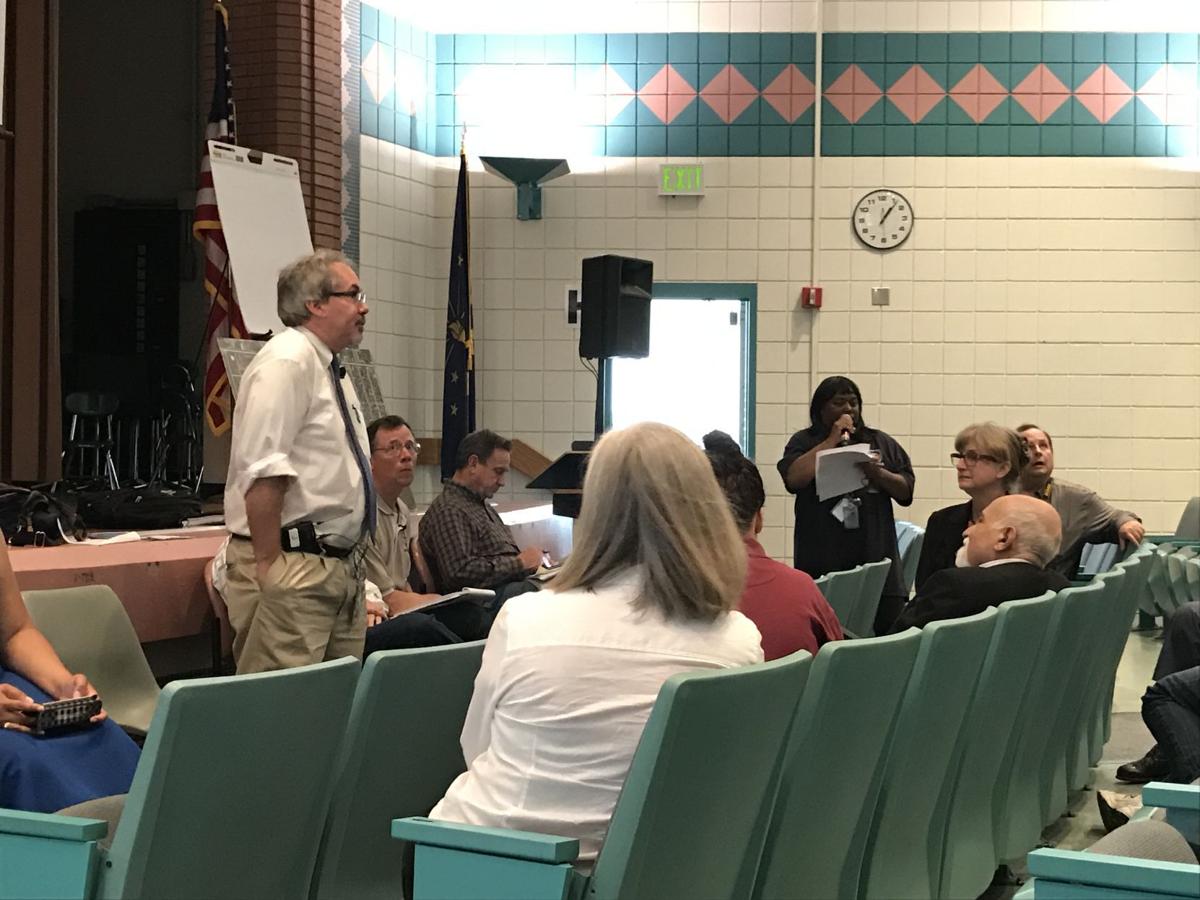 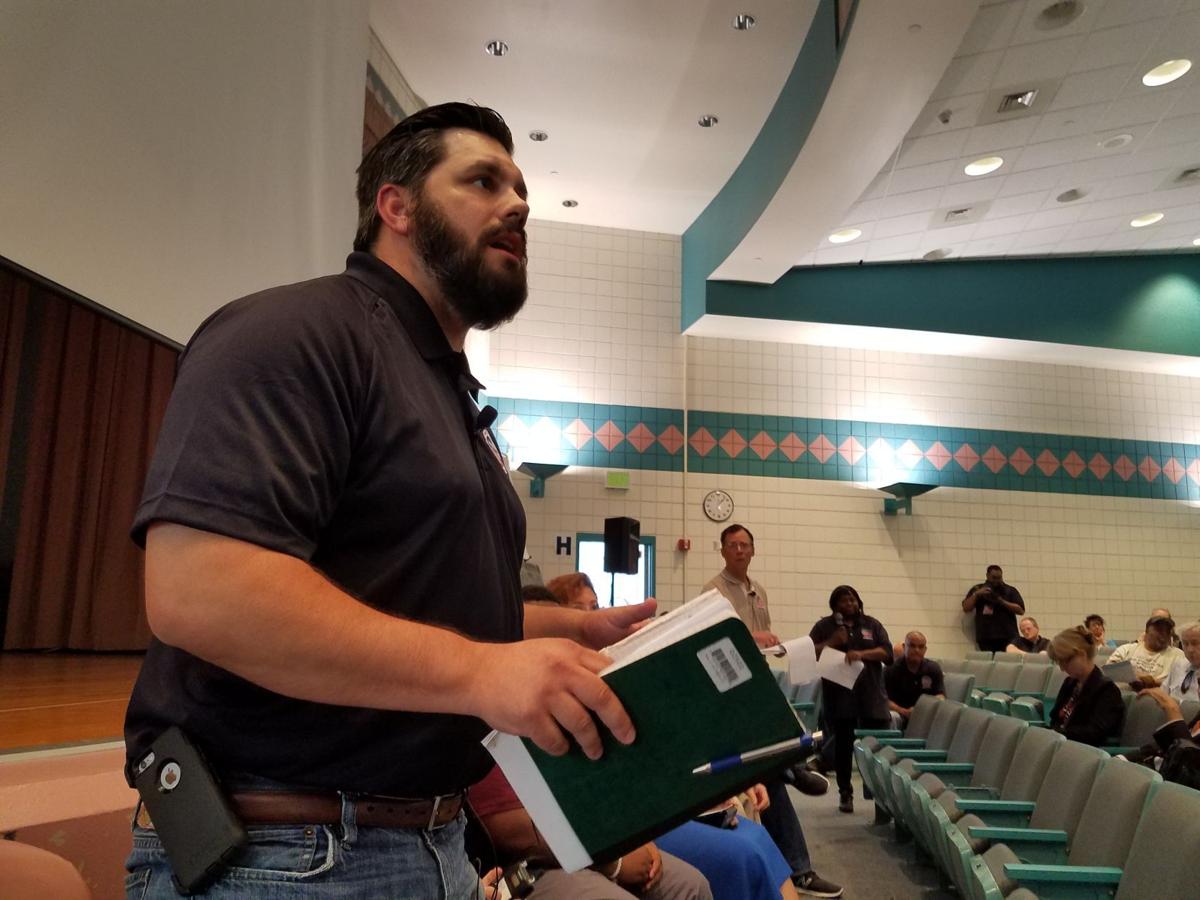 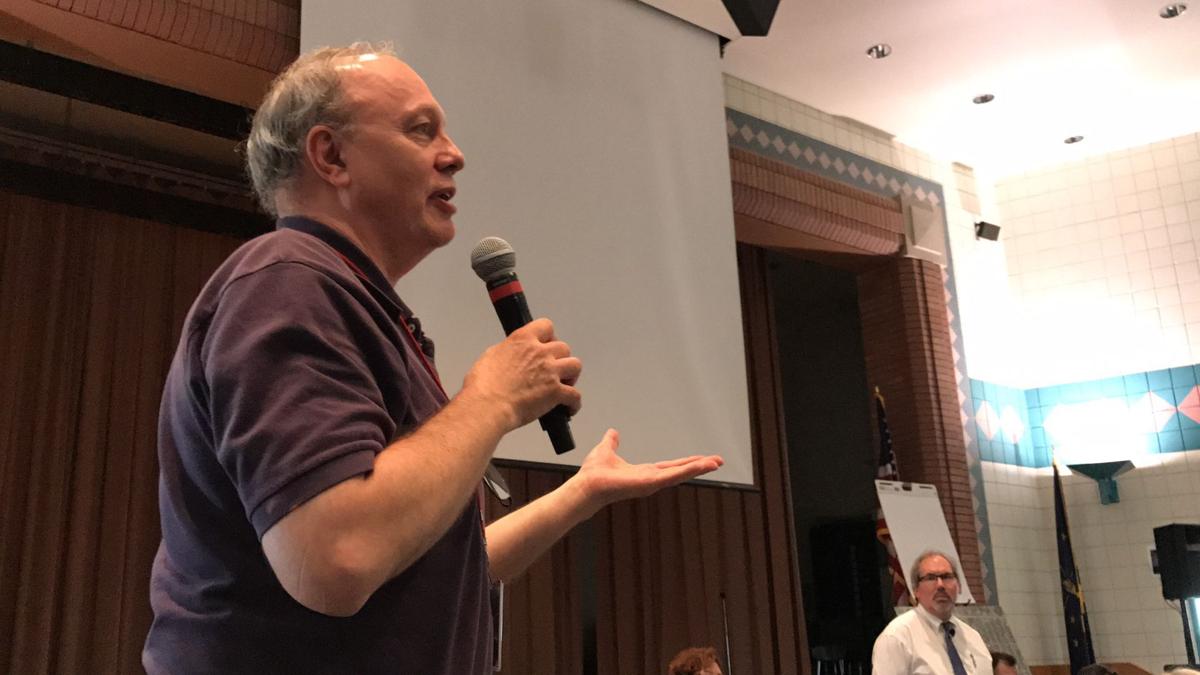 Mark Johnson, regional director for the CDC's Agency for Toxic Substances and Disease Registry, fields questions about the health effects of lead and arsenic exposure Saturday at an informational meeting hosted by the U.S. Environmental Protection Agency at the old Carrie Gosch Elementary School.

EAST CHICAGO — Residents on Saturday sought answers about whether their drinking water is safe and when EPA might test a black substance they're finding in toilets and sinks.

Officials with the U.S. Environmental Protection Agency and East Chicago offered some answers, but deferred on others to experts not present.

Residents were hoping to hear from Miguel Del Toral, EPA Region 5 water division regulations manager, who recommended in January residents assume they have lead service lines and use a properly certified filter for drinking water.

Residents have been grappling with the discovery last fall by EPA of elevated lead levels in drinking water at some homes.

EPA has said the problem likely was caused by inadequate levels of orthophosphate, a chemical used to prevent lead in service lines. The Indiana Department of Environmental Management and the city have been working to increase orthophosphate levels since October, records show.

Christopher Korleski, director of EPA Region 5 Water Division, said Del Toral would attend a future meeting along with representatives from IDEM, which has primary regulatory authority over the city's drinking water.

'Is my water safe to drink?'

Korleski faced pushback from Natural Resources Defense Council senior attorney Meleah Geertsma as he answered the question, "Is my water safe to drink?"

Korleski suggested residents should weigh their health risks in deciding whether to drink tap water. Geertsma said she didn't want Korleski to turn the decision back on residents.

IDEM recommendations that residents run water for several minutes before drinking are not realistic, she said. Children won't do that, and it will lead to higher water bills.

"They need clear guidance and should not tell residents they need to make their own choices," she said.

The NRDC and other groups in March filed an emergency petition with EPA asking the agency to use emergency powers to respond to lead in drinking water.

EPA has rescheduled several meetings with the council and has not provided any written acknowledgement that it received the petition, she said.

Carla Morgan, an attorney for the city, said there is no safe level of lead, and the city, IDEM and EPA are working to make the water safer. In the meantime, Superfund residents can go to the East Chicago Water Department to request a free filter, she said.

EPA has agreed to test a black substance residents across the city are finding in sinks and toilets, but the process isn't as easy as scraping the substance up and testing it, Korleski said.

Timothy Drexler, an EPA project manager, said the agency is working on creating a sampling plan.

"I hope to get back to you in a couple of weeks. Right now, I have nothing definitive."

Maritza Lopez, a resident of the Superfund site, questioned whether the city's use of sodium hexametaphosphate for a period ending in fall 2016 might have damaged service lines and be the cause of a black substance.

Studies have shown hexametaphosphate can increase releases of lead and is not recommended for lead control in cities with lead pipes.

The city began using sodium hexametaphosphate with IDEM's approval, but later discontinued its use after EPA asked IDEM to work with the city to make the change, officials said.

Morgan said East Chicago is concerned about the black substance, but doesn't suspect use of hexametaphosphate as the cause.

East Chicago will soon be replacing lead service lines at approximately 400 homes in the USS Lead Superfund site. The city is working with EPA to replace lines at homes that have already had soil remediated, City Engineer William Allen said.

About half of the residents have signed and returned agreements allowing the city access to properties, Allen said. East Chicago will continue reaching out to residents to let them know about the program, he said.

Children, the elderly and anyone with heart or lung conditions should reduce or avoid outside activities Tuesday because of the possibility of…

EAST CHICAGO — Residents will be listening Saturday for an answer to a simple question: Is the city’s water safe to drink?

Complete Coverage: East Chicago grapples with lead and arsenic for over a year

Reduced water use could slow efforts to coat lead lines

IDEM and EPA don’t appear to agree on whether dangerous lead levels EPA found in East Chicago’s drinking water are a systemwide problem, but t…

More than a year before the U.S. EPA found dangerous lead levels in drinking water at 18 East Chicago homes, the city began using a chemical t…

It’s possible up to 90 percent of homes in East Chicago have lead water lines, so all residents should assume they have them and use a properl…

Mark Johnson, regional director for the CDC's Agency for Toxic Substances and Disease Registry, fields questions about the health effects of lead and arsenic exposure Saturday at an informational meeting hosted by the U.S. Environmental Protection Agency at the old Carrie Gosch Elementary School.