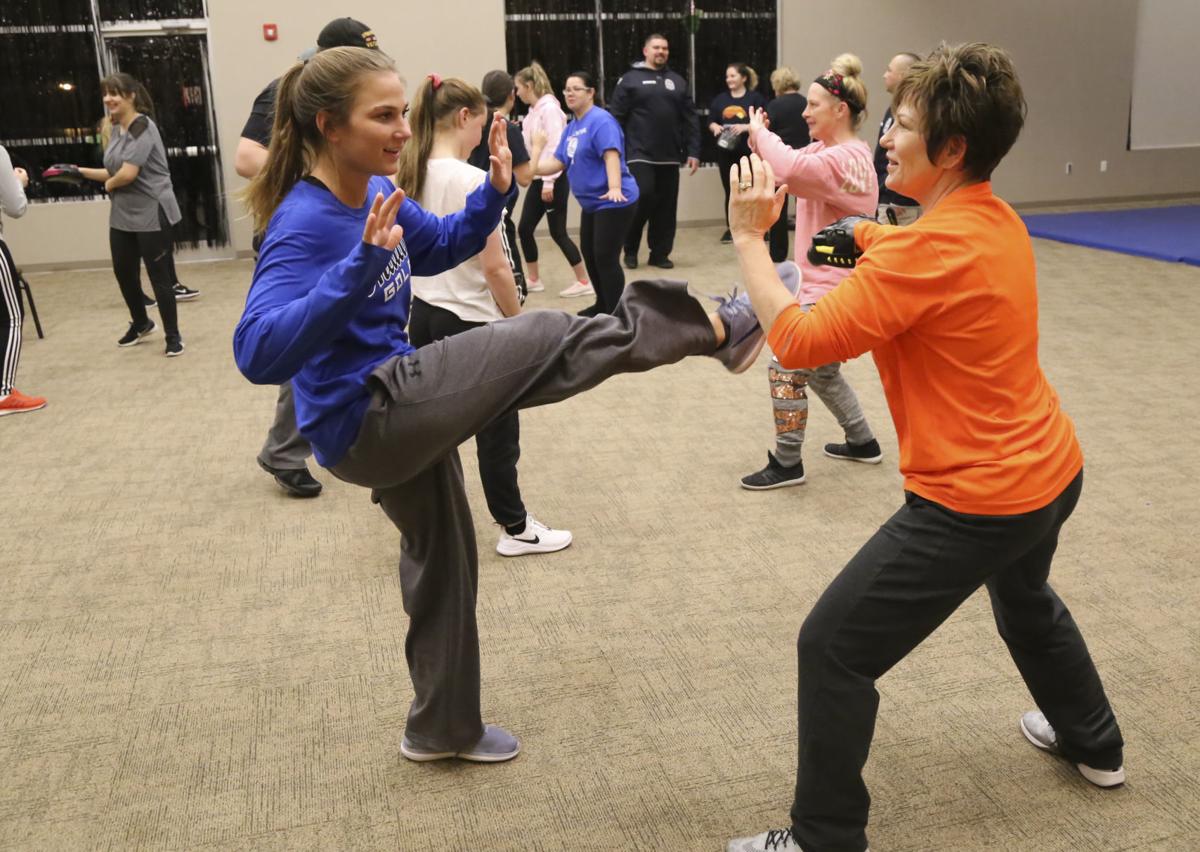 Taylor Lykowski, 18, of Schererville, practices kicks with her mother, Angela, during a free self-defense class for mothers and daughters hosted by the Schererville Police Department at the town's Community Center. Led by Officer Chris Lopez, participants learned basic punching, kicking and other techniques to use during an attack or violent confrontation. 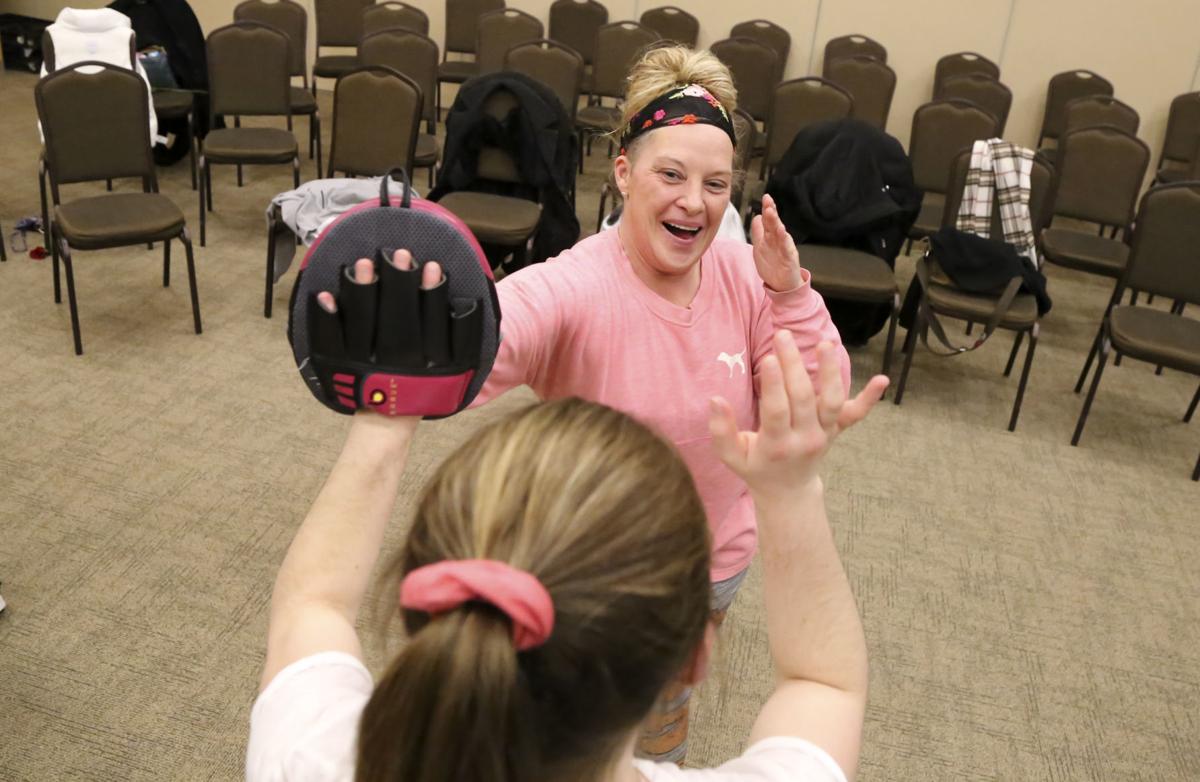 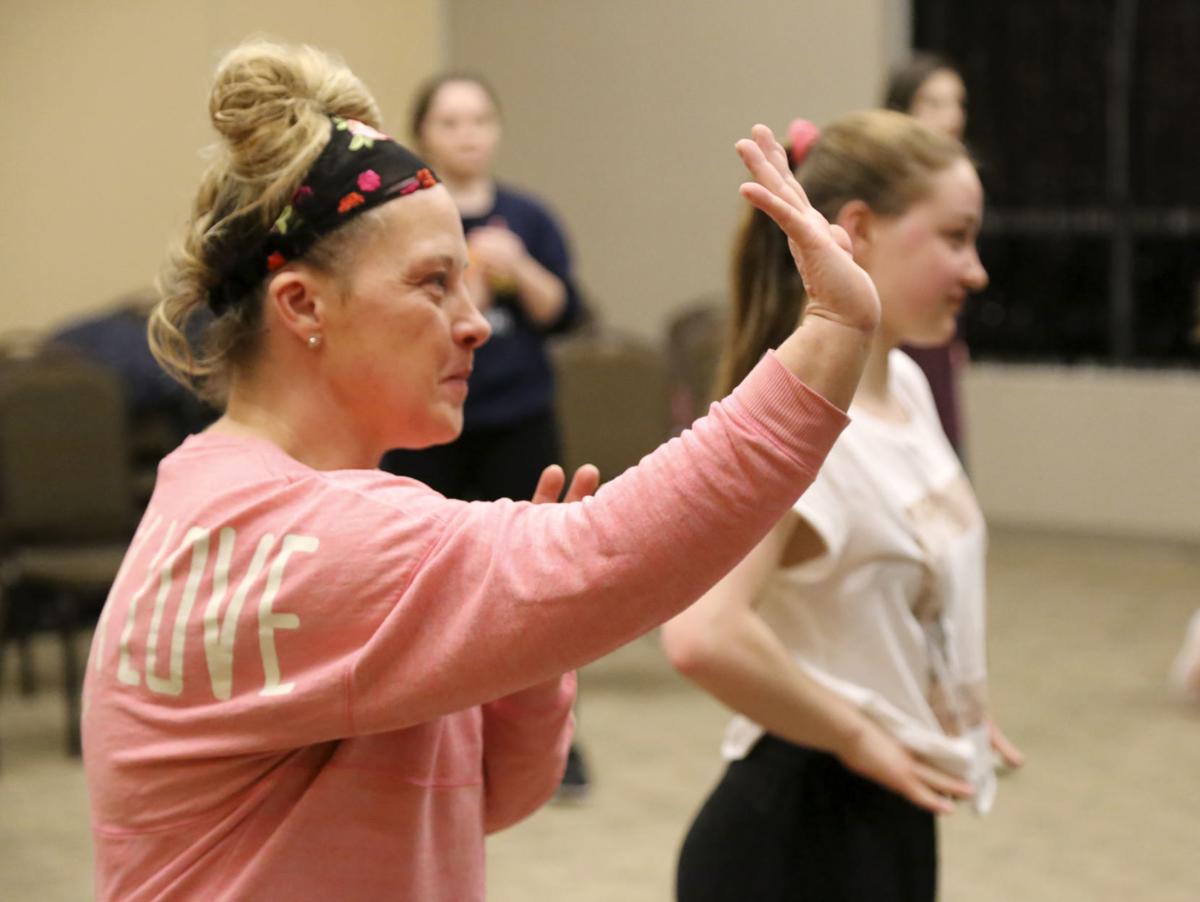 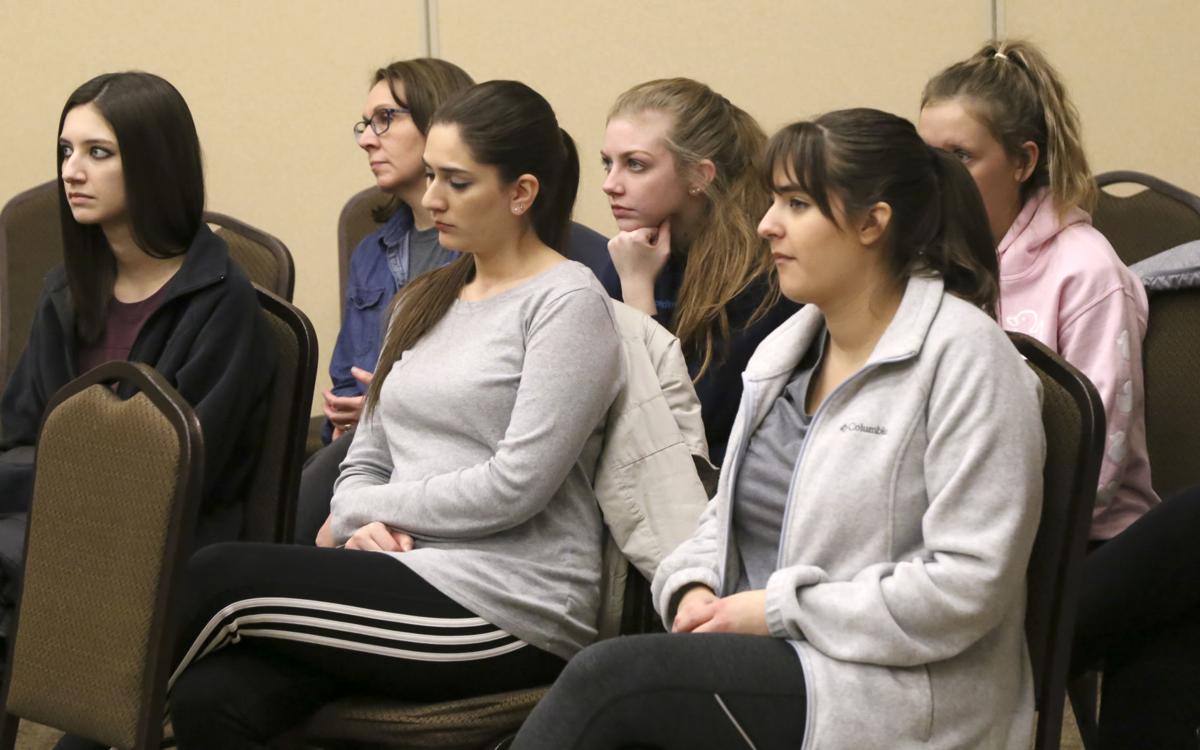 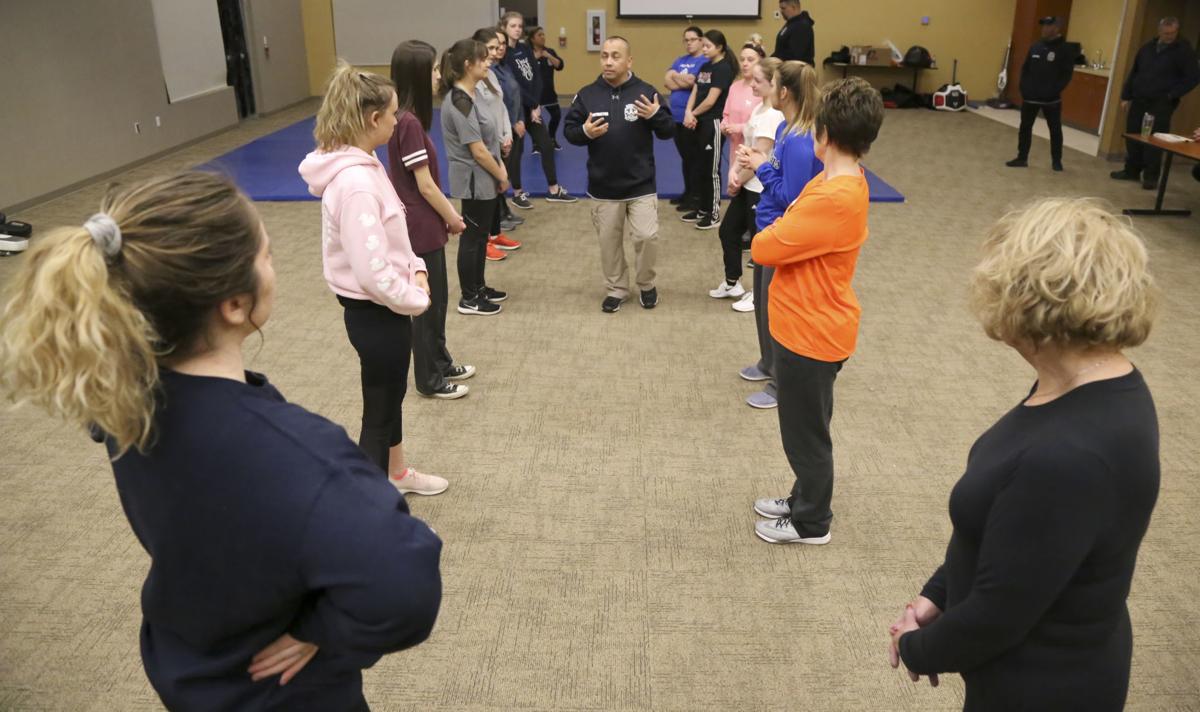 SCHERERVILLE ­— You’re walking to your car, leaving the store. Impulsively, you go searching for your phone.

With your head down, you’re now tunnel visioned, completely oblivious to the world around you. All your attention is locked on that little screen.

Everyone is guilty of doing it without even realizing.

But what do you do if that concentration is interrupted and you’re unexpectedly attacked?

Thanks to the training of the Schererville Police Department, 16-year-old Skyler Lea knows what to do to protect herself from the bad guy.

Skyler, along with her mother, Vanessa Lea, and grandmother, Kathy Peifer, attended the department’s free self-defense class Wednesday at the Schererville Community Center.

“I watch a lot of 'SVU' shows, and every time I would think about someone trying to attack me, I think, ‘Well, I’m dead. I don’t know what to do. I’m so tiny.’

The self-defense class was led by Schererville Officer Chris Lopez, who ­­­has taught the class for a couple of years and has nearly 20 years of police experience with the department.

With the help of other local certified tactical self-defense instructors, Lopez led the group of women through technique exercises and drills, simulating what would really happen on the street if faced with a violent confrontation.

“We want them to get a real idea of what it’s like to be in that high-stress situation,” Lopez said. “Here, the environment is controlled, but that’s different on the streets where you can lose. You have to have a plan.”

The ladies strapped on boxing pads and practiced striking techniques while discussing different attacking scenarios with instructors. Scenarios included being grabbed by the hair, bear hugged from behind and pinned down on the ground by an attacker.

Lopez repeatedly emphasized an important message to the crowd: There is no such thing as a mutual fight.

“In a physical confrontation, when you are out there and something is going on, you are going to be engaged. Hands are going up, grabbing clothes and body parts. You are going to have to be close. It’s just going to happen,” Lopez said during the first exercise where participants closely faced each other, learning how to get in a fight stance.

In a fight stance, shoulders are apart with knees slightly bent and one leg back. Hands stay up to block and protect the face. To avoid potential damage to the hands, Lopez advised open palm versus the closed fist when striking. Don’t forget to breathe.

“You want to move the comfort level out of your system so you understand, this is going to happen. You are going to know whether they bathed that day, whether they have brushed their teeth in the last week, what shampoo they use or don’t. That’s the shock value. It will hit you in seconds.”

Lopez’s humor kept the crowd smiling and giggling throughout the two-hour class, but his lessons were serious in light of February being Teen Dating Violence Awareness Month.

Females ages 16 to 19 are four times more likely than the general population to be victims of rape, attempted rape, or sexual assault, according to the Rape, Abuse & Incest National Network. One out of every six American women has been victim of an attempted or completed rape in her lifetime.

“This is real deal stuff. If someone is trying to hurt you, you do whatever it takes to get away,” Lopez said, encouraging participants to continue to take more community self-defense classes to practice the skills they learned.

“It might be intimidating at first to take one of these classes, but it is actually fun and entertaining,” Skyler said.

Skyler was one of two teens who fought Lopez, who wore a padded suit and a large padded helmet during the “Fight the bad guy” grand finale. The intense one-minute fight earned her a pair of MMA gloves from police.

“It was a good class. I couldn’t believe we could actually do everything. All the techniques really work,” Vanessa said, hugging her daughter. “We will definitely be coming to more classes.”

The next free self-defense class will be held in July, according to the Schererville Police Department's Facebook page.

Those interested in participating or learning more about self-defense techniques, can contact Officer Chris Lopez at 219-322-5000 or clopez@schererville.org.

CEDAR LAKE — Bad things can happen unexpectedly at any time to anyone. The Cedar Lake Police Department wants community members to have a plan.

SCHERERVILLE — Schererville police took a little break from fighting the bad guys Friday morning. Instead, the cops took to the rooftop to rai…

Taylor Lykowski, 18, of Schererville, practices kicks with her mother, Angela, during a free self-defense class for mothers and daughters hosted by the Schererville Police Department at the town's Community Center. Led by Officer Chris Lopez, participants learned basic punching, kicking and other techniques to use during an attack or violent confrontation.