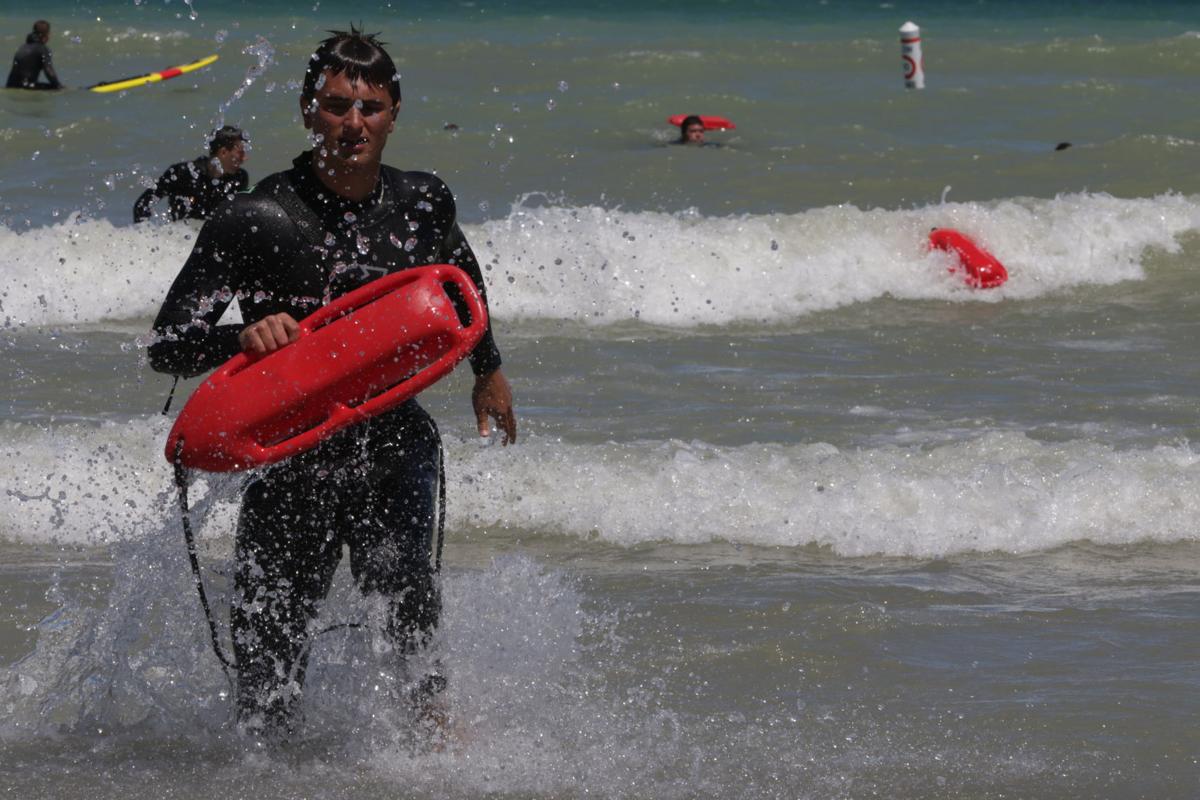 Chris Kaptur, of Chesterton, emerges from Lake Michigan during a lifeguarding exercise practicing with rescue cans on Tuesday in Michigan City. 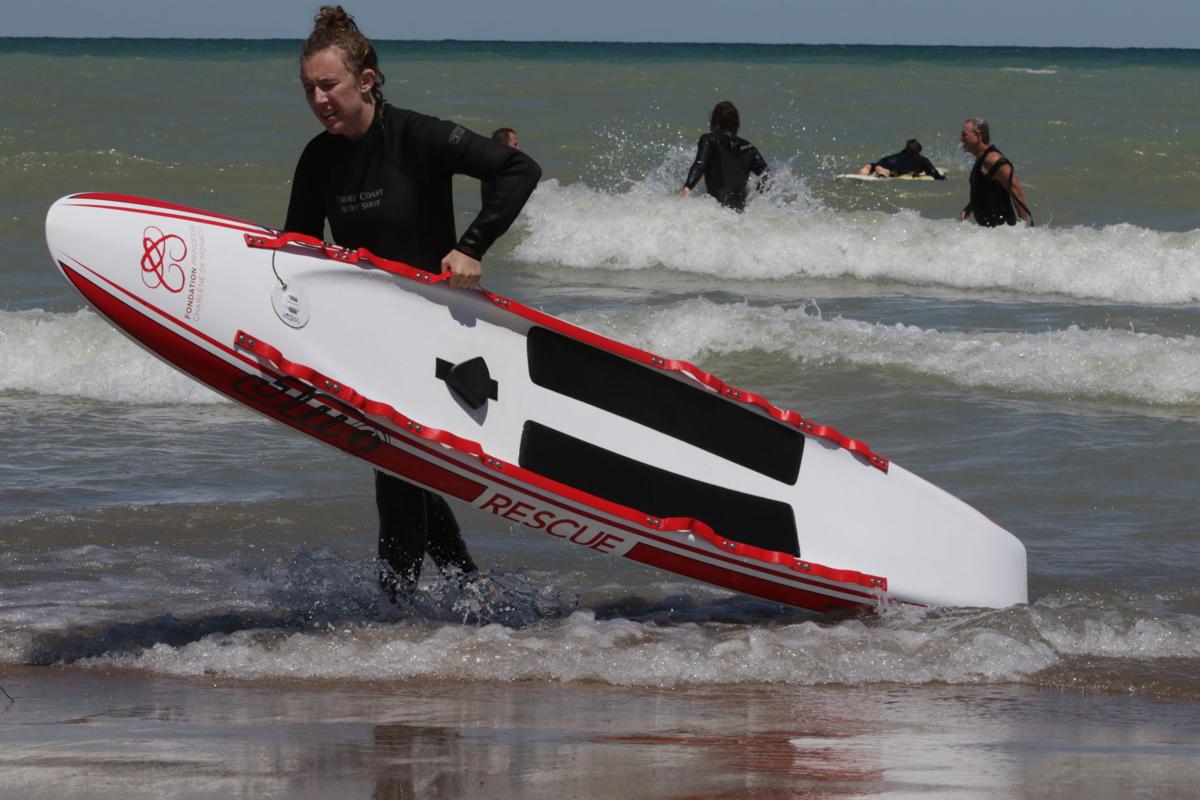 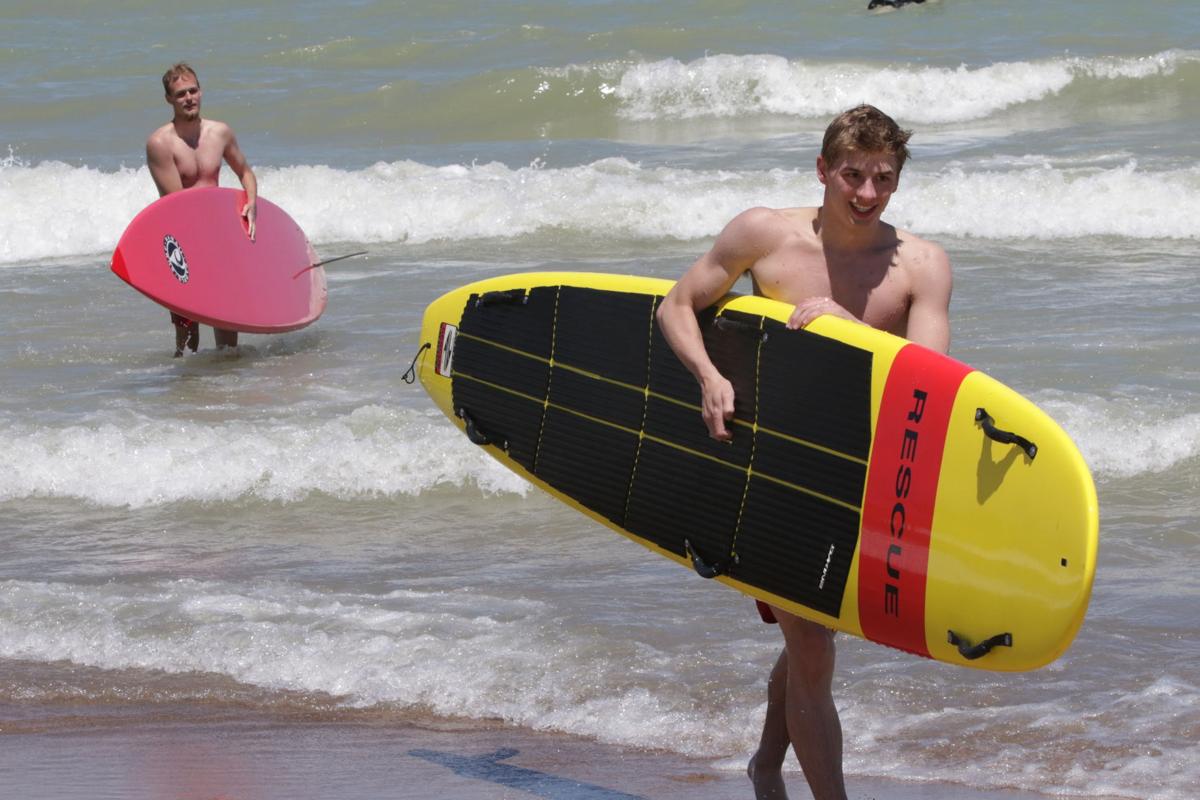 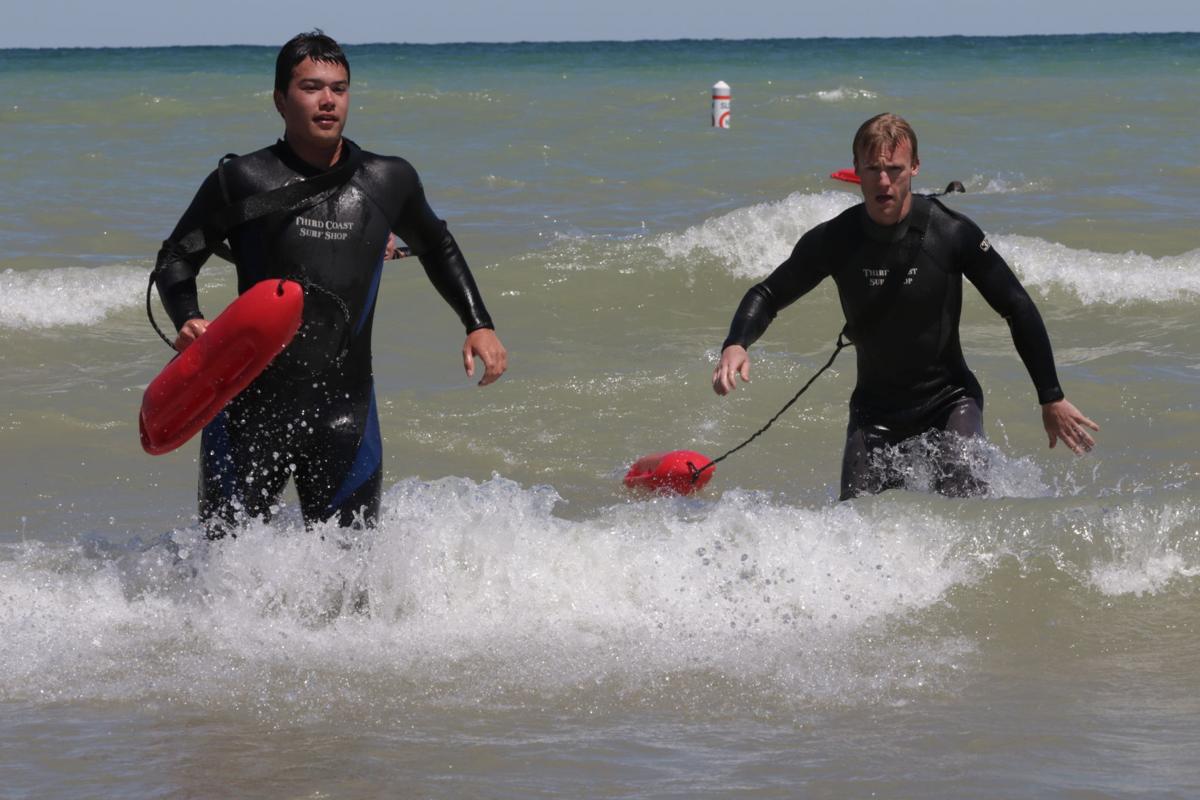 Kyle Patedjl, left, of Michigan City, and Justin Smoker, of LaPorte, practice a lifeguarding exercise with rescue cans in Lake Michigan on Tuesday in Michigan City. 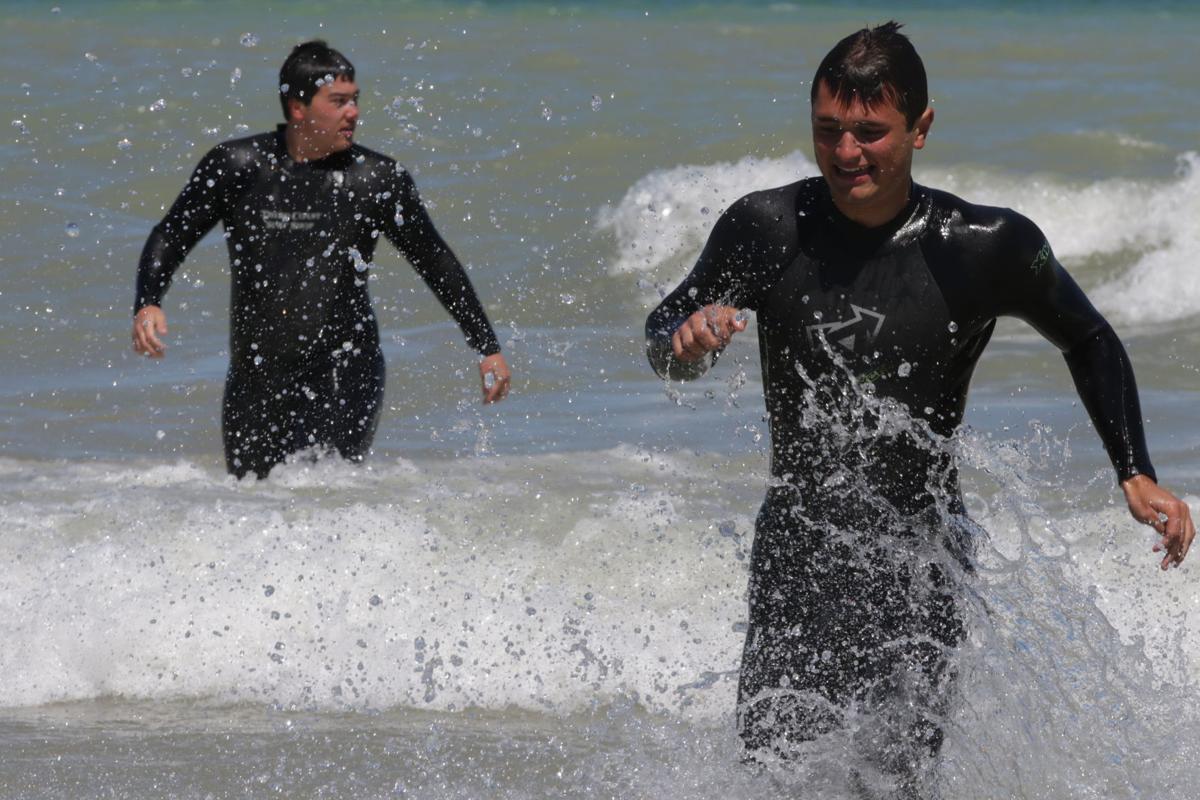 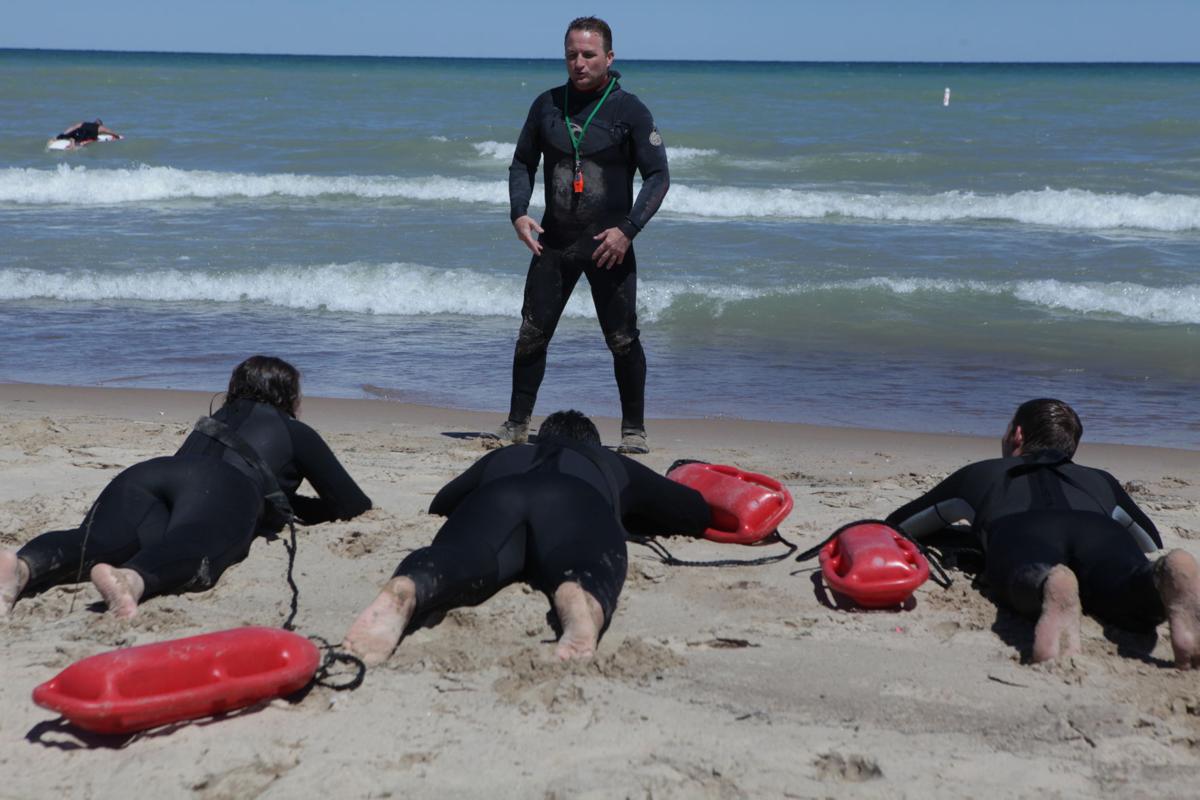 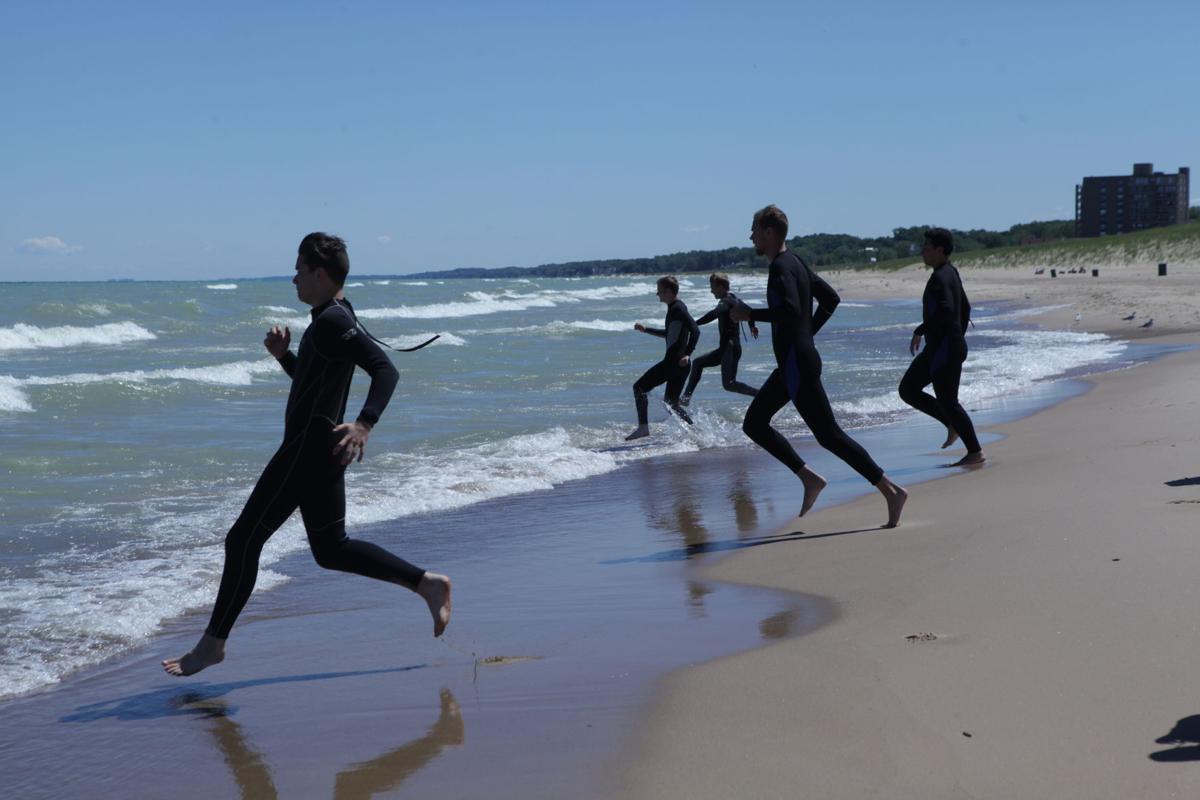 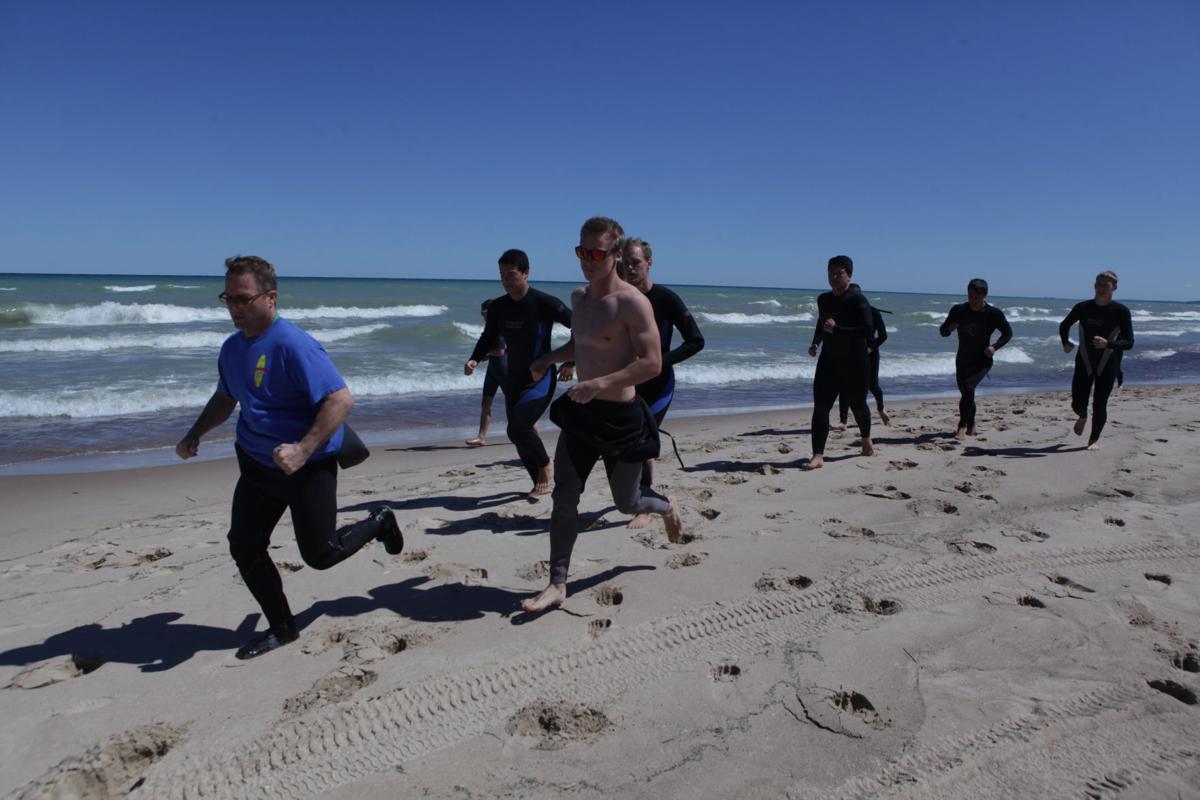 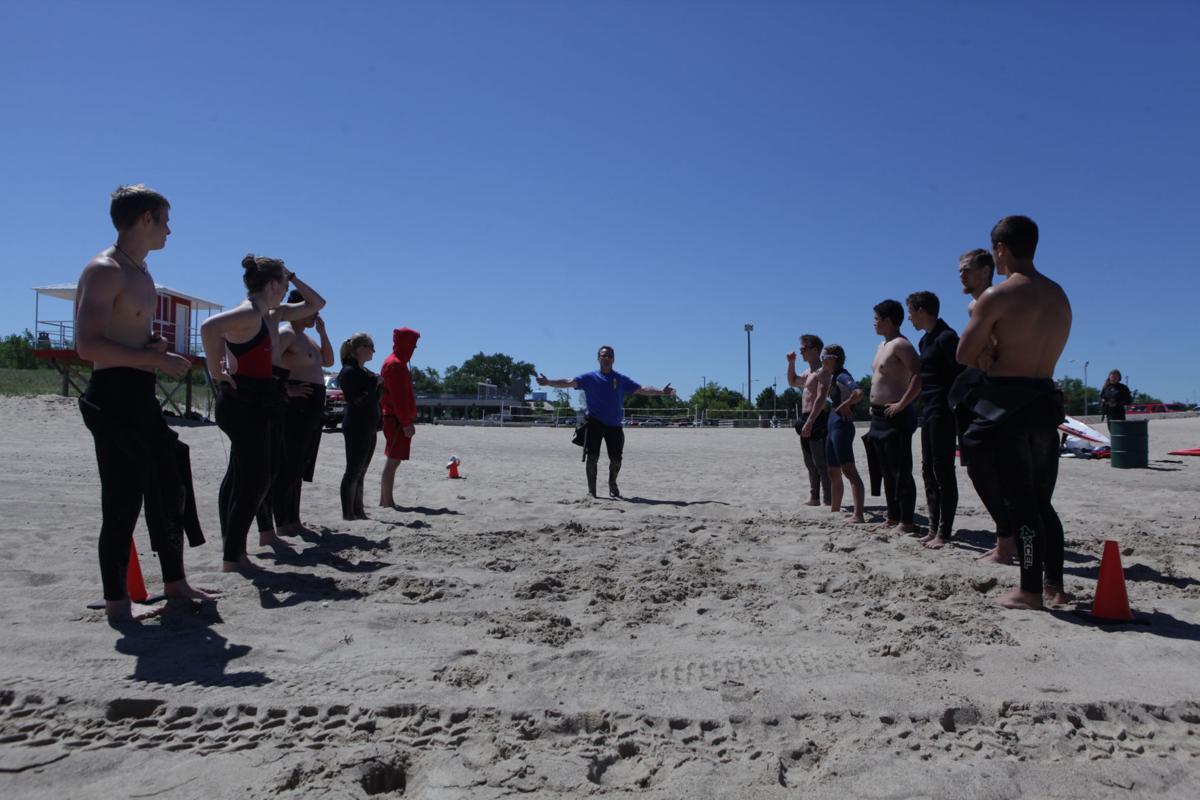 MICHIGAN CITY — Every day, 10 people die from unintentional drowning in the United States, and of these, two are children 14 or younger, according to the Centers for Disease Control and Prevention.

Here in Northwest Indiana, drowning is always top of mind for lifeguards, especially those who trained on Tuesday morning at Washington Park beach in Michigan City, and on Monday at Whihala Beach in Whiting, as part of the Open Water Surf Lifeguard In-Service Training Program.

The training was conducted by the Great Lakes Surf Rescue Project. Instructor Dave Benjamin said this type of training is unlike any other.

“There is a huge difference between pool and open water training. In a pool you have 100 percent visibility, warm water, consistent water depths and a contained number of people. In open water surf there are winds, waves, dangerous currents, drop-offs and holes, temperature fluctuations of 10 to 20 degrees in pockets, and thousands of people coming and going,” he said.

“The waves are steep today. It’s a lot harder than it looks, isn’t it?” instructor Bob Pratt asked the group before climbing on a rescue surfboard to demonstrate techniques as the lifeguards stood dripping and shivering in their wetsuits in the wind.

“There are two ways to paddle the board. One is like a surfboard, flat on your stomach, or you can kneel, grab the water, pull it behind you. It’s more efficient kneeling, but less stable, so you have to determine which is best for the conditions,” Pratt said.

Those conditions, said Benjamin, are always unpredictable in Lake Michigan waters, which is why it is by far the most deadly of the Great Lakes.

“People will be safer if they realize there are dangerous currents in Lake Michigan and those are created by winds. It depends on the wind, which way the currents will go,” he said.

For lifeguards, keeping a floatation device between them and the victim at all times, and always having a backup on shore who can supervise the situation, is the key to rescue and survival.

Mo Hakim, one of the head lifeguards at Washington Park, realized the dangers of Lake Michigan firsthand last summer when he rescued a victim who dived off of the pier, even though this is forbidden.

“Many deaths in the Great Lakes happen off of these structures,” he said, pointing to the pier, “and last summer was probably one of the roughest in a few years. I pulled a kid out who was under for 10 minutes. I dove down and got him off of the bottom of the lake, got him on a Coast Guard boat, and we transported him, and he’s alive today.”

He said he hopes that this summer will be safer as people become educated to the dangers of Lake Michigan and Tuesday’s training helps lifeguard teams to properly respond.

Jacob Breault, a rookie lifeguard with Indiana Dunes State Park, says the training will no doubt help him this summer.

“This is a lot different than a pool. You get the experience of a real rescue on wavy days,” he said.

If you find yourself in trouble:

Flip over onto your back and float.

A. Float to keep your head above water.

B. Float to calm yourself down from the panic and fear of drowning.

C. Float to conserve your energy.

Follow the safest path to safety: Never swim against a current. If you are in a dangerous current, assess which way it is pulling you. Then swim perpendicular to the currents flow until you are out of it and then swim toward shore. If you are too tired to swim to shore, continue to float and signal someone on shore for help. Also, the waves may eventually bring you back to shore.

LAPORTE — LaPorte County appears headed to war against homes in disrepair, along with high grass, junk and loud noise.

Summer vacation? Lots of Americans say they can't afford it

Forget frequent flier miles, last-minute getaways and even road trips. Nearly half of Americans say they won't be taking a vacation this summe…

CHICAGO — A water safety nonprofit group has found that the number of drownings decreased this swim season on Lake Michigan compared with last year.

Three people have had to be rescued from a Lake Michigan beach in the past week, as life-threatening waves and currents ripple through Northwe…

Chris Kaptur, of Chesterton, emerges from Lake Michigan during a lifeguarding exercise practicing with rescue cans on Tuesday in Michigan City.

Kyle Patedjl, left, of Michigan City, and Justin Smoker, of LaPorte, practice a lifeguarding exercise with rescue cans in Lake Michigan on Tuesday in Michigan City.