UPDATE: Swimmer who went missing at Gary's Marquette Beach found dead in lake
Share this
1 of 8 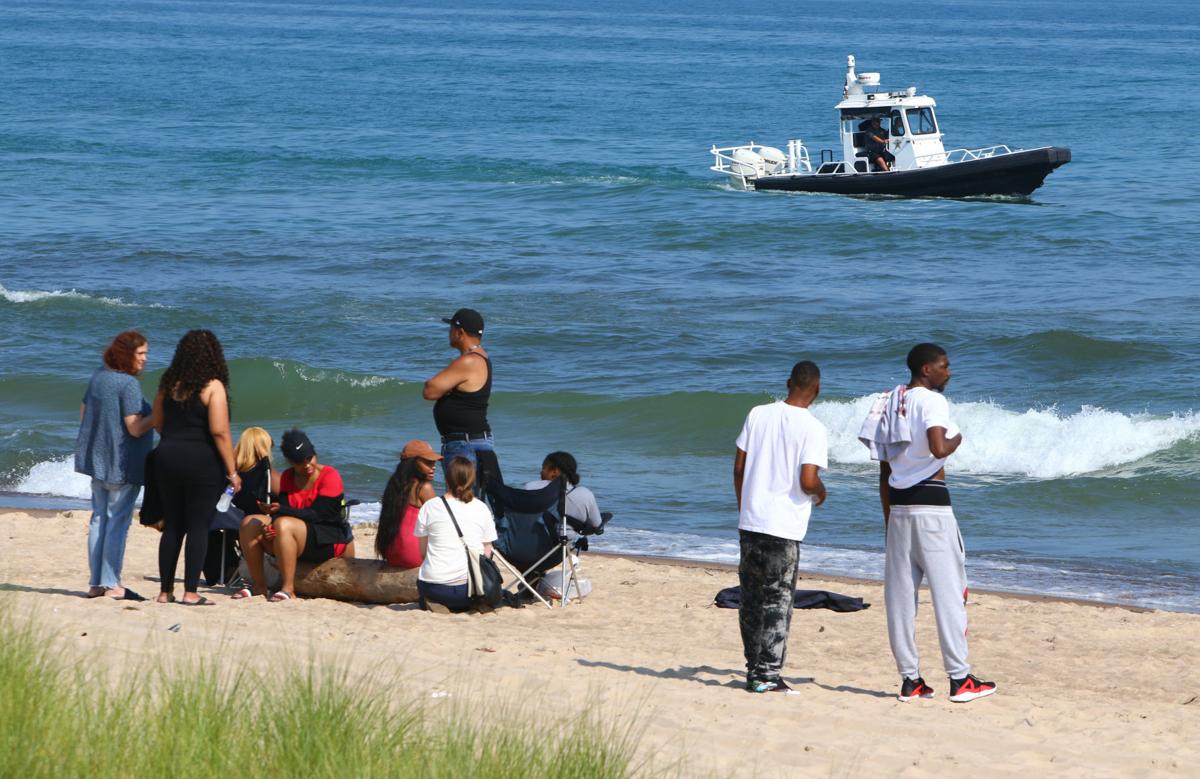 Family and friends of Tiara Hardy sit along the shoreline at Marquette Park Beach while a Lake County police patrol boat searches in the water Tuesday in Gary for Hardy. Hardy disappeared underwater Monday while swimming with two friends. 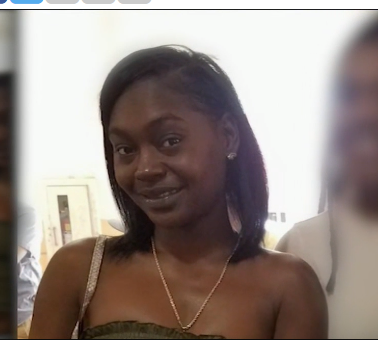 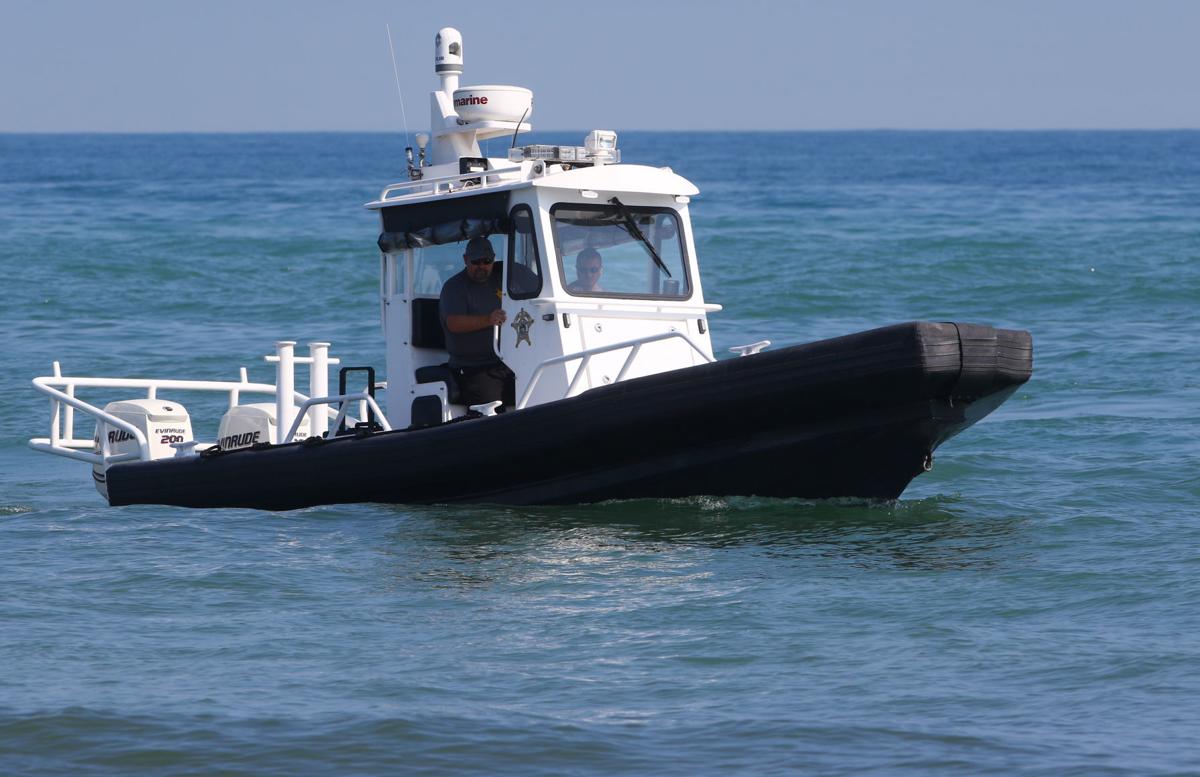 A Lake County police patrol boat searches along the shoreline at Marquette Park Beach on Tuesday in Gary for Tiara Hardy, 24, of Merrillville. 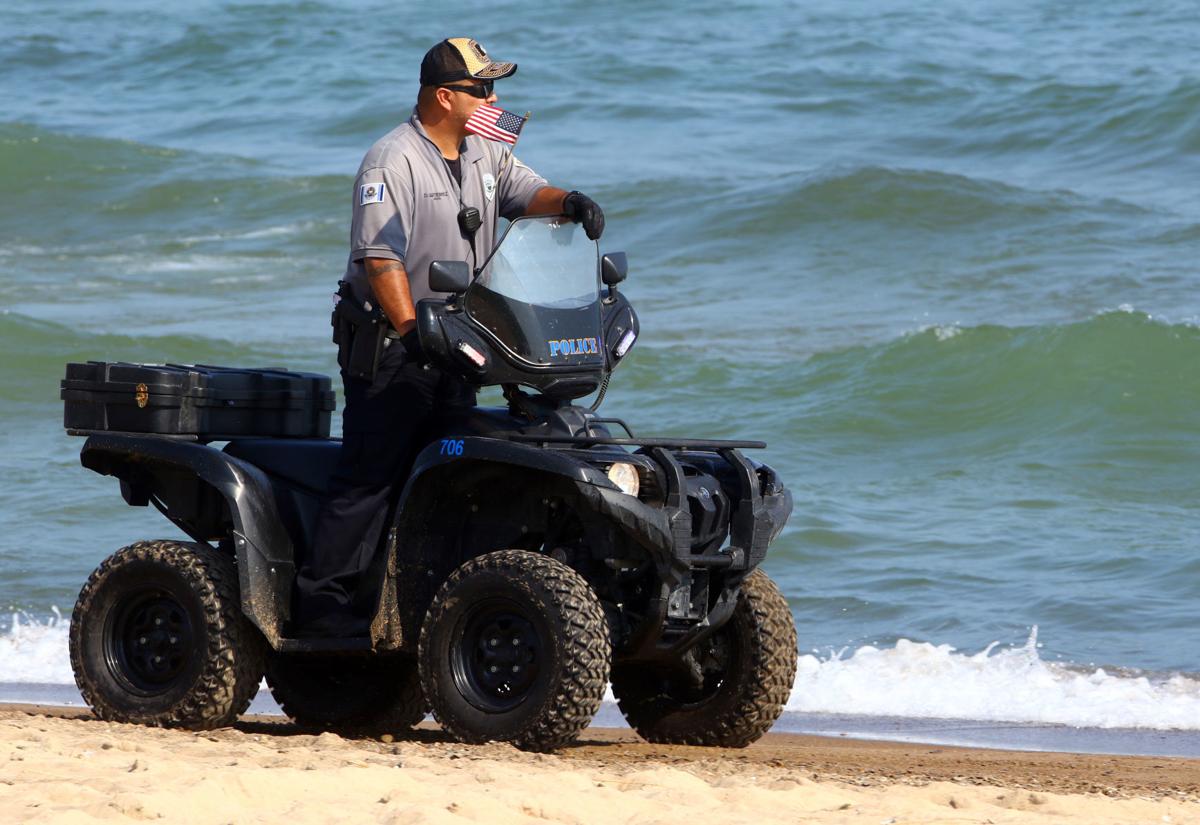 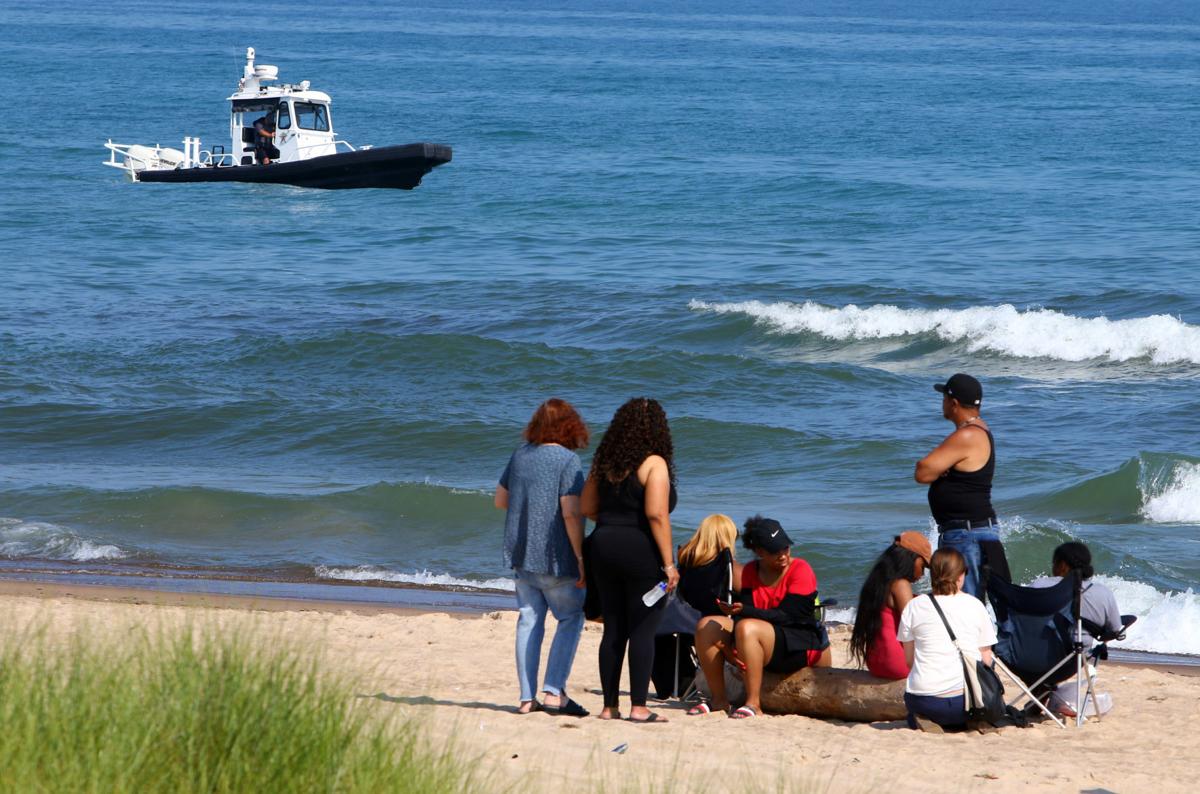 Family and friends of Tiara Hardy sit along the shoreline at Marquette Park Beach while a Lake County police patrol boat searches in the water Tuesday in Gary. 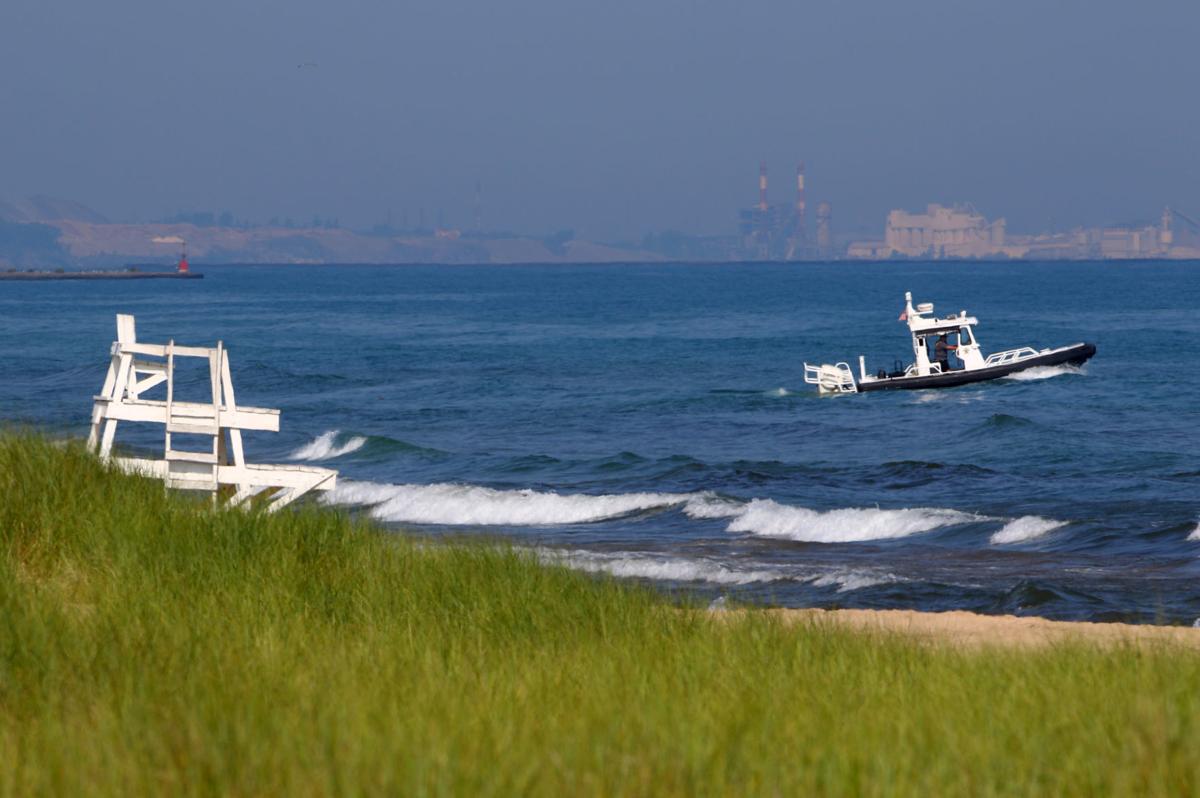 A Lake County police patrol boat searches along the shoreline at Marquette Park Beach on Tuesday in Gary. 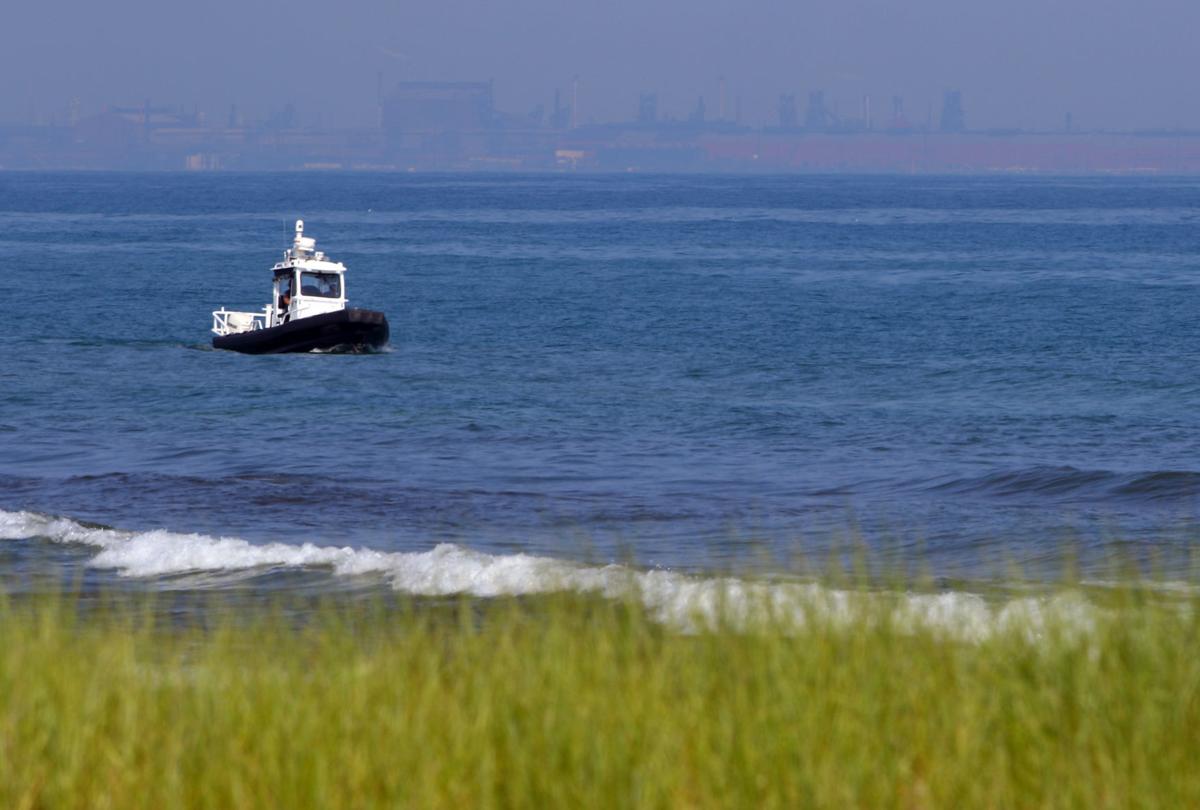 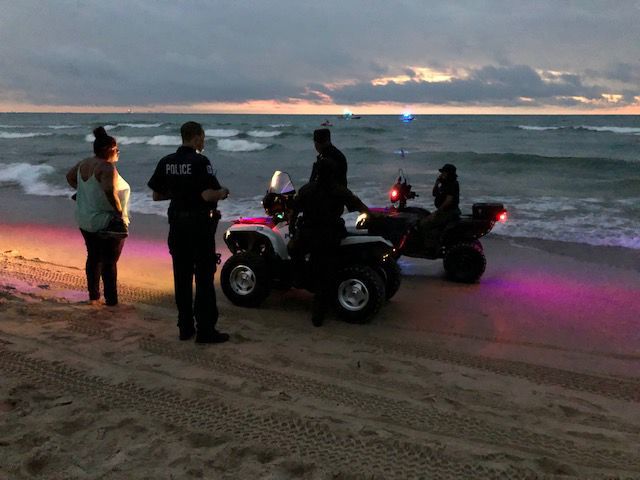 Officials conduct a search late Monday for a 24-year-old woman who disappeared in the water off Marquette Beach in Gary.

GARY — A search was called off Tuesday evening for a swimmer who went missing Monday in the water off Marquette Beach after the body of Tiara Hardy was recovered in the lake.

Gary Police Department Cmdr. Jack Hamady said a female body was found at about 5:30 p.m. Tuesday about a quarter mile west of Marquette Park and about 150 yards from shore in Lake Michigan. A Hobart Fire Department diver recovered the body the Lake County Marine Unit found with sonar.

"The search efforts have been halted at this time," Hamady said. "The Gary Police Department and the city of Gary are sadden for the family and our condolences go out to the friends and family of this young woman. The Gary Police Department would like to thank all the agencies that assisted in the rescue and search efforts in the last 24 hours. Also thank you to the public and the business owners who helped in the search and donated refreshments to the search teams."

The body was taken to the East Chicago Marina and then turned over to the Lake County coroner's office for identification by the family. The Indiana Department of Natural Resources confirmed it was Hardy Tuesday evening.

The Lake County coroner's office said the cause and manner of death are pending.

Hardy was swimming with two friends when all three attempted to return to the shore because of high waves and strong currents, he said.

A good Samaritan was able to help Hardy's companions back to shore, police said. Witnesses said they saw Hardy struggling in the water before she went under and disappeared.

Gary police were dispatched to the beach at 1 N. Grand Blvd. at 7:28 p.m. Monday for a report of a woman in gray shorts and a red top who disappeared in the waves.

After searching for several hours, authorities called off their efforts Monday night because of darkness and water conditions.

Conditions in the lake were dangerous Monday. The National Weather Service had issued a beach hazards statement warning beachgoers to stay out of the lake because of "life-threatening" waves and currents.

However, beachgoers Monday night at Marquette Park told The Times they didn't see any warning signs or flags.

The city says when conditions are dangerous it has beach patrol and lifeguards warn beachgoers from the stands and by walking along the shoreline, and posts warning signs at the ticket booth and warning flags at lifeguard stands, said LaLosa Burns, a spokeswoman for the city of Gary.

"Reports indicate Tiara Hardy and two friends went into the water on Monday despite warning signs posted at the beach," Gary said in a news release late Tuesday night. "The three friends reportedly entered water after lifeguards were off duty."

In an email to The Times earlier Tuesday, Burns said the warning flags are removed from the lifeguard stands after the evening shift.

In addition to Hardy's disappearance, the city has had about a half dozen near-drownings so far this summer season.

"Citizens and visitors to the beach are reminded that while Gary Beach Patrol monitors the beach until 10:00 p.m. during beach season, lifeguards are on duty at Gary beaches from 10:00 a.m. - 6:00 p.m.," Gary said in a news release. "The city utilizes the national weather service and beach testing to determine when swimmers should not enter the water. Signs will be posted at beach entrances, red flags will be erected and lifeguards will walk the beach to warn patrons of dangerous water."

The conditions had been dangerous in the week leading up to Monday. The Hammond Port Authority closed its beach one day, and another day opened the beach but disallowed swimming. In Hammond, beachgoers have to pass through a guard station, and the beach has 24-7 security.

"We have to help protect people from themselves when it comes to water safety," said Milan Kruszynski, the Port Authority's director. "Our utmost concern is safety on that beach."

At Washington Park beach in Michigan City, when lifeguards are on duty and rip current conditions are present, the city closes its designated swim area, flies a red flag at the park entrance and the lifeguard tower, posts "Danger" signs along the lakeshore, conducts walking patrols to notify people outside the swim area of the dangerous conditions, and posts information on its Facebook page and website, said parks superintendent Jeremy Kienitz.

Still, people often ignore the warnings, Kienitz said. In a recent one-week period, two girls and a 40-year-old man had to be rescued.

In Chesterton, the Indiana Dunes State Park beach is guarded and only open when lifeguards are on duty. If there are high waves and rip tide activity, the park doesn't allow anyone into the water, as it did during some of the recent poor lake conditions, said Brandt Baughman, north region manager for Indiana State Parks.

"We haven't had a drowning on our beach during authorized swimming hours in a few decades," he said.

Instead, he said the National Lakeshore posts warning signs at all access points to the lake, as well as beach hazard warnings on its Twitter feed and Facebook page.

The U.S. Coast Guard assisted in the search Monday night. Coast Guard officers also have been assisting in a search for a sailor who fell overboard Saturday near Chicago and went missing during the Race to Mackinac, said Matthew James, chief warrant officer at Calumet Harbor. The Chicago Fire Department is still searching for the man in the area where he went missing, which is about 4 miles east of Navy Pier.

On Monday night at Marquette Beach, Daniel Harman, of Portage, told The Times the story of how he helped rescue the two people who were with Hardy.

He said he watched from the beach as three people, including Hardy, drifted farther and farther out from shore before they started yelling for help.

He estimated they were about 100 feet from shore, among the high, choppy waves.

He said he swam out and grabbed the man, and a woman was able to pull herself to the shore. But Hardy, who was the farthest out, disappeared when a wave crashed over her.

The other woman and the man made it back to shore and are fine, police said.

1. Check the conditions ahead of time.

4. If you're caught in a rip current, swim parallel to the shore.

6. If you see someone struggling in the water, get them something that floats.

7. Stay away from rock walls, piers and other structures.

Before you go to the beach, you can check the swimming risk levels and whether there are beach hazard statements in effect by visiting the National Weather Service's Great Lakes Beach Hazards site at weather.gov/greatlakes/beachhazards.

5 important stories you need to know from yesterday: Swimmer who went missing at Gary's Marquette Beach found dead in lake

This upcoming weekend, when many visitors will be in town for the Great Lakes Grand Prix speedboat races, the Taste of Michigan City will brin…

Public safety measures, which were supposed to be in place but weren’t, likely wouldn't have kept a Merrillville woman from drowning to death …

WEST LAFAYETTE, Ind. — Indiana farmers will have to change the types of crops they sow, the timing of plantings and adapt in other ways to the…

Gary administration eyes changes to warning signage at its beaches

BRIDGEPORT, N.Y. — Two new exotic zooplankton species have crept into the Great Lakes, according to researchers.

Get in the mood for the holiday season at a French Christmas Concert at the Indiana Dunes Visitor Center next weekend.

Drones have been taking flight over Northwest Indiana's industrial lakeshore.

Police officers in Lake County will be out in full force on the roads next month to look for drunken and distracted driving.

GARY — Conservation police have called off a search at 9:16 p.m. Monday for a 24-year-old woman missing in Lake Michigan at Marquette Park Beach.

Three people have had to be rescued from a Lake Michigan beach in the past week, as life-threatening waves and currents ripple through Northwe…

Every week in Northwest Indiana, it seems, we hear another story of a person drowning in Lake Michigan.

If a boat gets stranded on Lake Michigan or a hiker breaks a leg while hiking deep in the woods of the Indiana Dunes, the closest helicopter c…

Family and friends of Tiara Hardy sit along the shoreline at Marquette Park Beach while a Lake County police patrol boat searches in the water Tuesday in Gary for Hardy. Hardy disappeared underwater Monday while swimming with two friends.

A Lake County police patrol boat searches along the shoreline at Marquette Park Beach on Tuesday in Gary for Tiara Hardy, 24, of Merrillville.

Family and friends of Tiara Hardy sit along the shoreline at Marquette Park Beach while a Lake County police patrol boat searches in the water Tuesday in Gary.

A Lake County police patrol boat searches along the shoreline at Marquette Park Beach on Tuesday in Gary.

Officials conduct a search late Monday for a 24-year-old woman who disappeared in the water off Marquette Beach in Gary.