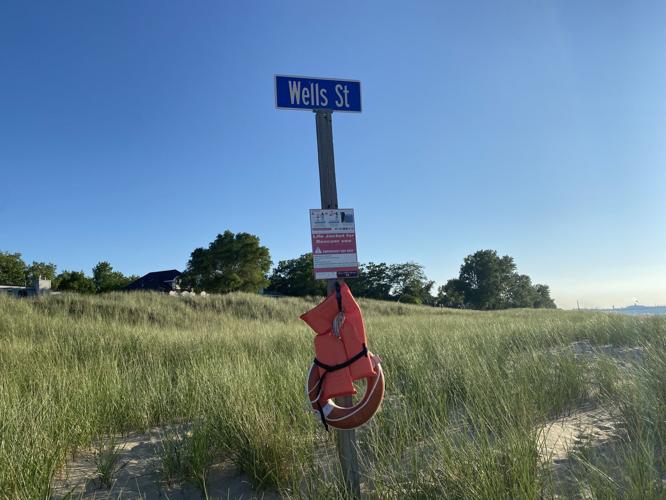 A safety station at Wells Street Beach is shown. 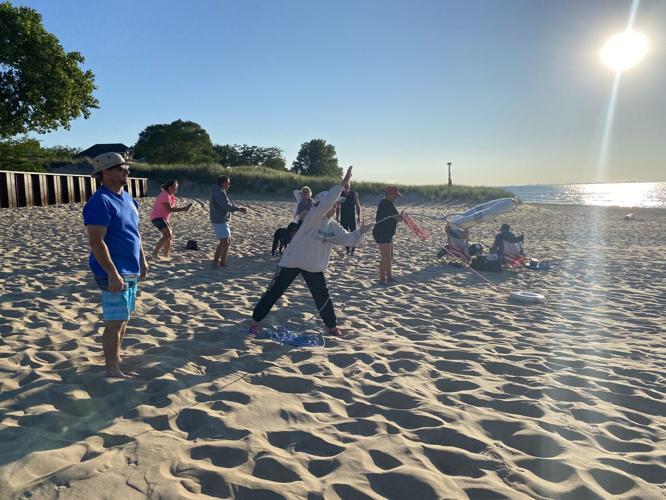 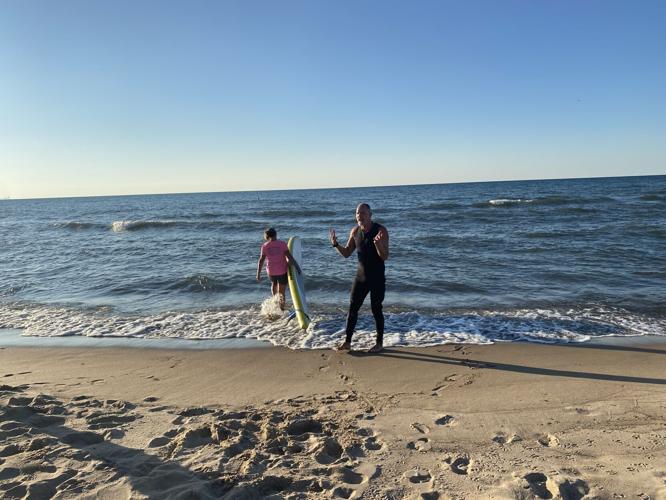 Bob Pratt, co-founder of the Great Lakes Surf Rescue Project, preparing to show attendees how to assist a drowning victim with a surf board. 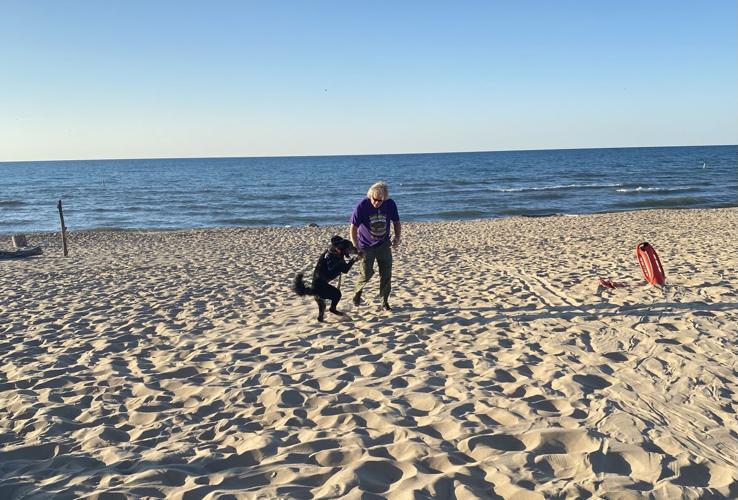 Lee Sczepanski plays with his dog, Wilber, while at the Surf Rescue Clinic.

GARY — The recent Lake Michigan drowning death at Porter Beach should serve as a deadly reminder to beachgoers that the powerful riptide waves can swallow any swimmer if they’re not properly prepared.

In 2022, there have been 20 drowning deaths in Lake Michigan with the most recent incident occurring at Porter Beach Monday morning. Thomas Kenning, 38, drowned after entering the water to save a teen who was struggling to stay afloat.

Dave Benjamin, co-founder and executive director of the Great Lakes Surf Rescue Project, said if Kenning had taken something that floated with him when entering the water, it’s possible he would have survived.

“No matter how good or strong of a swimmer you are, you can have a drowning incident,” he said Monday evening at Wells Street Beach in the Miller section of Gary. “It’s not common sense to know panic is the first stage of drowning, or an active drowning victim can submerge within the first minute.”

Since 2010, there have been 503 drowning deaths in Lake Michigan which accounts for almost half of all drowning deaths in the Great Lakes, Benjamin said. Drowning incidents commonly occur because people aren’t aware of the active signs of drowning nor the preventative steps to take.

“We don’t play in fire and still know fire strategy,” he said. “Everyone plays in water and few very people know the drowning strategy.”

Benjamin said after submersion, the heart will begin to stop after three minutes, followed by the start of irreversible brain injury after four minutes. He said there’s only a 14% chance a person will survive if rescued after 10 minutes of submersion.

The GLSRP promotes the “flip, float and follow” method to survive a drowning incident. Begin by flipping over on your back, floating to get your breathing under control and calming yourself down to conserve energy.

“One time I was just reading and I looked up noticing everyone in the water was gone,” she said while sitting in a lawn chair next to her husband, Scott. “There were helicopters and boats everywhere. It was very frightening and very sad.”

Hammond resident Michelle Castillo brings her three sons to Wells Street Beach once or twice every summer. Castillo said she restricts how far out she lets her children go into the water due to high waves.

“These waves can be dangerous, it can pull them under,” she said as her three children were playing with a ball in the sand. “They should have a lifeguard here, or put restrictions out for the younger kids that parents have to be with them instead of sitting in a chair.”

Benjamin said a small child with zero swimming ability can immediately submerge without having the opportunity to show signs of panic.

Someone with limited swimming ability who is in water over their head may struggle for 15-20 seconds before final submersion. He said even adults with Olympic-quality swimming abilities can submerge within one minute once panic and exhaustion set in.

On Monday evening, his organization hosted a Surf Rescue Clinic at Wells Street Beach, informing a dozen attendees to be aware of safety stations at local beaches that include a life jacket and rescue ring. (For more information on water safety education visit https://glsrp.org/).

If a person appears to be in distress in the water, always ensure the rescuer uses the life jacket for themselves and the rescue ring for the victim, Benjamin said. It’s also important to notify an on-duty lifeguard.

Beachgoers should also be aware that buoys are generally placed for the purposes of boats, not swimmers. Although buoys are aligned, there may be different sandbar formations around them causing one buoy to be in a more shallow area compared to another.

“We just want everyone’s family fun-day at the beach not to turn into some horrific tragedy they’ll have to live with for the rest of their lives,” Benjamin said.

"She made it out with the assistance of lifeguards from (Indiana) Dunes State Park, but he got sucked under," an official said.

Around 6:30 p.m. a jet ski with a man and a woman riding it began to sing a half-mile from the shore at Marquette Beach in Gary.

Two teen brothers have been pronounced dead after being pulled from Lake Michigan Sunday night.

The 12/20 landscape of Dunes Highway and the largely parallel U.S. 20 highway in Gary's Miller neighborhood have been undergoing a major transformation as many decrepit old buildings get demolished.

Two females were struggling in the water in an unguarded portion of the beach. Visitors were able to pull a 14-year-old female from the water, but a 9-year-old was not visible.

Jacqueline Frabotta was the first patient to ring the new bell added at the Franciscan Health Infusion Center in Munster after six months of chemotherapy treatment.

Evelyn Hernandez survived a near death drowning experience in 2012 and now advocates the importance of water safety skills among other community members.

This Day in History: The Washington Monument is completed

The Bordeaux region, in crisis, calls for help to pull out vines

The Bordeaux region, in crisis, calls for help to pull out vines

Shocking royal family interviews that changed the course of ‘The Firm’

Shocking royal family interviews that changed the course of ‘The Firm’

A safety station at Wells Street Beach is shown.

Bob Pratt, co-founder of the Great Lakes Surf Rescue Project, preparing to show attendees how to assist a drowning victim with a surf board.

Lee Sczepanski plays with his dog, Wilber, while at the Surf Rescue Clinic.