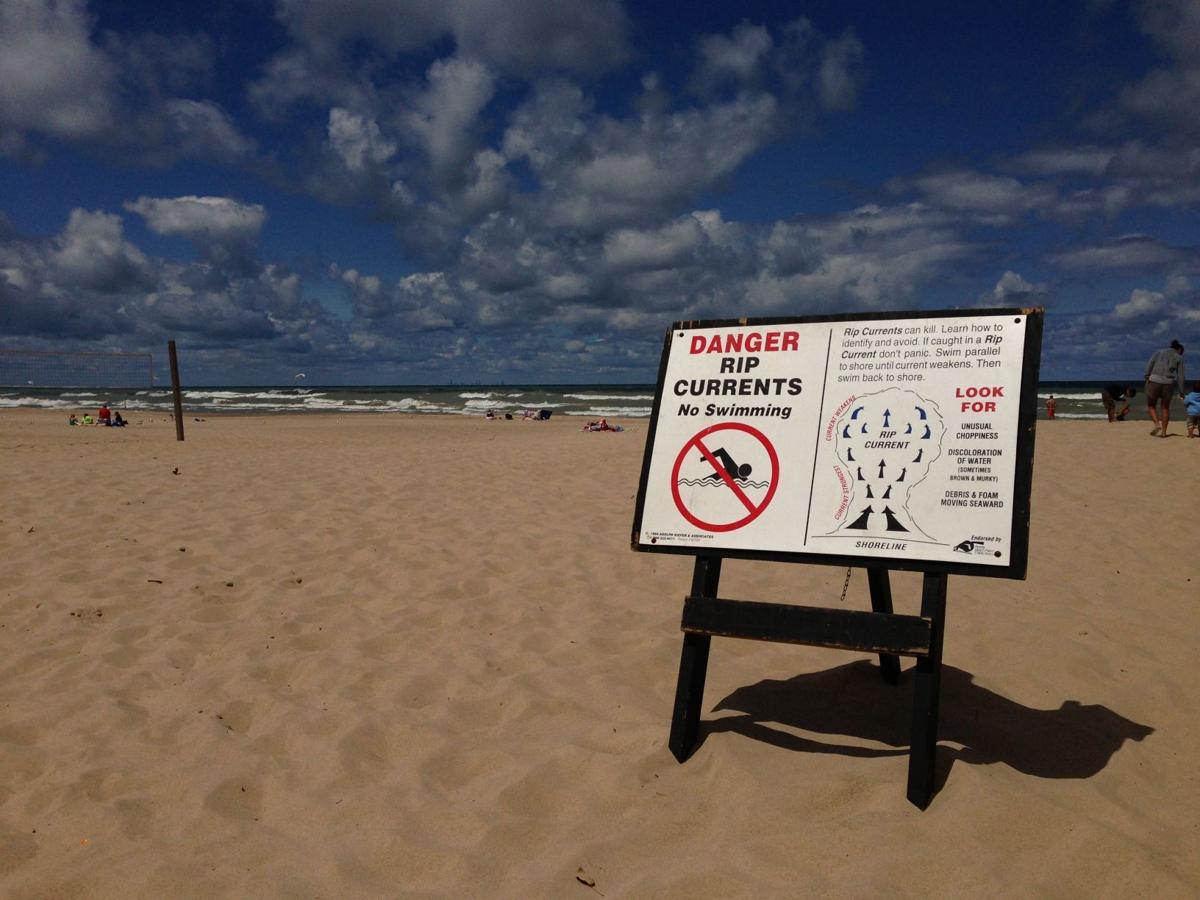 A sign posted Tuesday, Aug. 13, 2013, at the Indiana Dunes State Park warns visitors that swimming is not allowed because of the potential for rip currents. 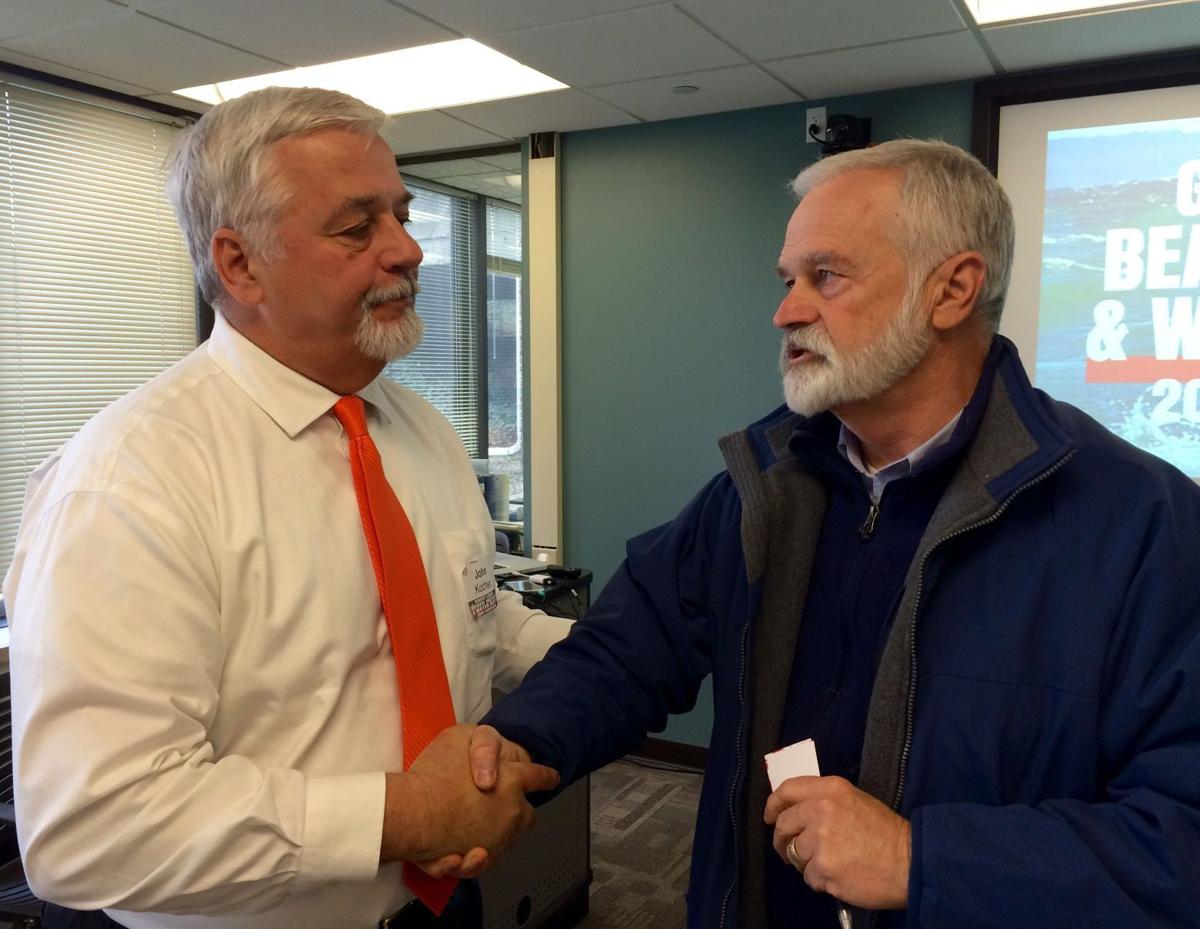 John Kocher, left, shakes hands with Craig Dunham, advocacy coordinator for the state of Michigan and the National Association of Emergency Medical Technicians. Kocher's 15-year-old son, Matt, of Tinley Park, Ill., drowned in Lake Michigan off of a New Buffalo, Mich. beach in 2013. 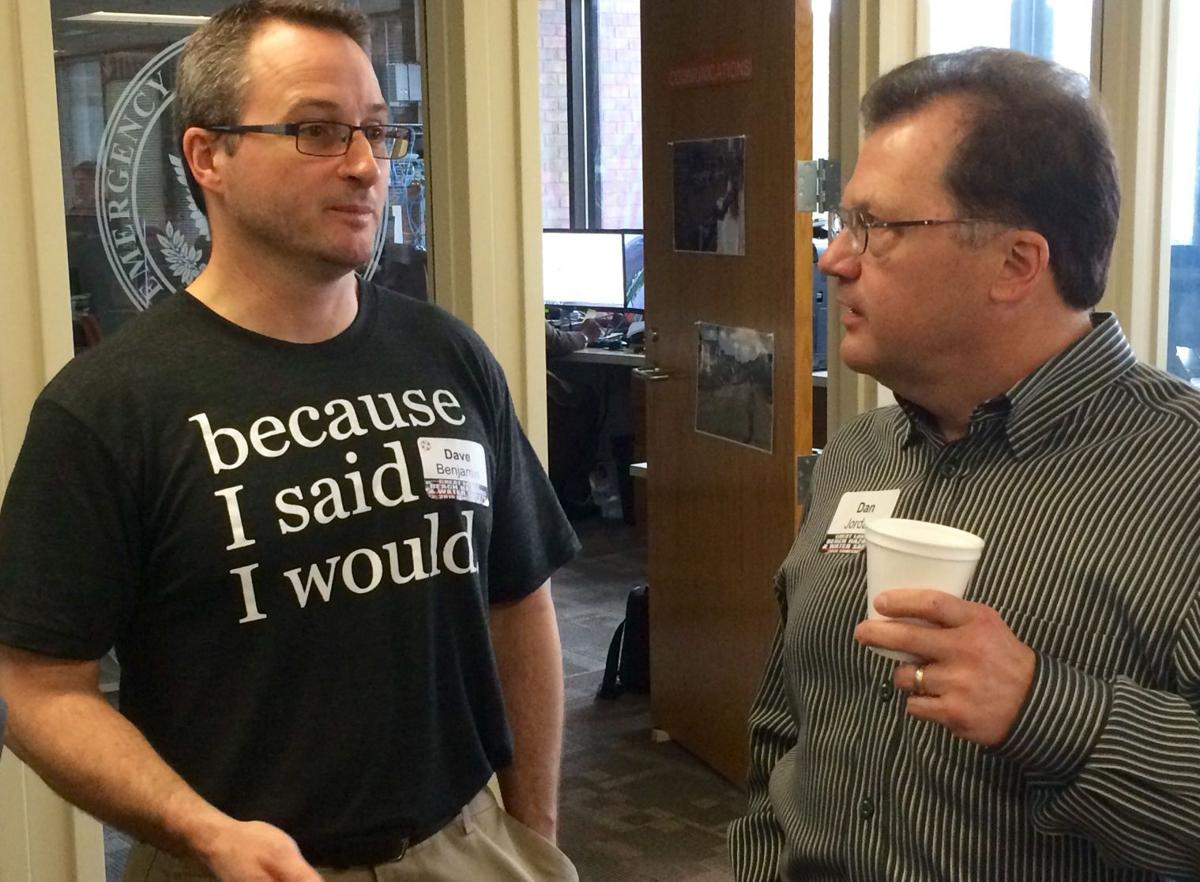 MICHIGAN CITY | Dave Benjamin lived to tell the story hundreds of drowning victims in Lake Michigan can not.

Benjamin nearly drowned in Lake Michigan while surfing off the Portage shoreline on Dec. 26, 2010.

"I was choking on water and being pushed under the water," Benjamin said. "I'm in instant panic. I can hear my surf board getting knocked into the wall."

Benjamin was trying to signal to his buddies, but couldn't catch his breath. As he was being held underwater, he remembered an article he read that saved his life.

"I got on my back and I floated and thought great, I got my air back," he said. "The waves were pushing me toward the wall and there's a structural current pulling me out."

Benjamin floated on his back in the swirling currents for about 40 minutes before the waves pushed him into open water and he made it to shore.

Benjamin decided that day to dedicate himself to water safety education, which led to the creation of the Great Lakes Surf Rescue Project. The group teaches water safety classes and works with families to advocate for water safety.

His group led a Great Lakes Beach Hazards and Water Safety Conference Tuesday at Michigan City Hall. The event aimed to bring educators, first responders, property managers, National Weather Service meteorologists and members of the press together to address the issue of safety in the waters.

Benjamin said 384 people drowned in the Great Lakes since 2010, with half of those occurring in Lake Michigan. Half of the Lake Michigan drownings, he said, occurred in the southern portion of the lake.

One of those victims was Matt Kocher, 15, of Tinley Park, Ill., who drowned in rip currents in Lake Michigan off the New Buffalo shoreline in 2013.

"Matt was not educated about the dangers in Lake Michigan and he died," said his father, John Kocher on Tuesday.

Kocher said Matt was 6 feet 4 inches tall and weighed 233 pounds. He took his son for his football physical the day before he died.

"He still was no match for the power of a rip current," Kocher said.

Kocher said most people learn to swim in the controlled environment of a swimming pool, with still waters and clearly defined depths. He said increased attention needs to be directed at open water training and closing beaches to swimmers on days when waves and rip currents present dangers.

Many beaches post warnings, but allow swimmers to enter the water at their own risk. The day his son died, a red flag warning was issued advising against swimming.

Benjamin said there is a stigma to drowning, with the public tending to blame the victims, parents or caregivers.

"It leads people to believe, 'It can't happen to me,'" Benjamin said.

Benjamin's Great Lakes Surf Rescue Project advocates the three F method for surviving a water accident: Flip over on your back, float and follow the safest path out of the water.

"As long as you're floating, you're alive," he said.

Benjamin said since 2009, $800 million has been spent in Illinois, Indiana and Michigan on efforts to lure people to water-based activities.

"What percentage of that could have funded water safety school curriculum?" Benjamin said.

Kocher said he believes planners may be worried about "a 'Jaws' effect," fearing too many warnings would keep beachgoers -- and the money they spend in surrounding businesses -- away.

"Is the safety of the visitors to our lakeside communities our No. 1 priority?" Kocher said.

"We have the curriculum," he said. "We're looking for funding to launch in the Great Lakes region and then launch it nationally."

"People need to hear the same message being repeated multiple times from multiple resources so it becomes common sense, just like wearing a seatbelt," Dodson said.

"He still was no match for the power of a rip current," John Kocher said of his son, Matt, who stood 6 foot 4 inches tall and weighed 233 pounds.

In all kinds of weather ...

ROMEOVILLE, ILL. — In a tiny, nondescript building just north of Joliet sits a federal agency with more influence over the actions of Chicago-…

CHICAGO — A suburban Milwaukee city won a hard-fought battle Tuesday to draw its drinking water from Lake Michigan, a key test of a regional c…

"Winter surfing in Lake Michigan." - A promise story from because I said I would.

Dave Benjamin, executive director of Great Lakes Surf Rescue Project, shares the story of his near drowning in Lake Michigan off the Portage shore.

"Gentle giant." - A promise story from because I said I would.

The Kochers tell the story of their 15-year-old only child Matt's drowning in Lake Michigan.

A sign posted Tuesday, Aug. 13, 2013, at the Indiana Dunes State Park warns visitors that swimming is not allowed because of the potential for rip currents.

John Kocher, left, shakes hands with Craig Dunham, advocacy coordinator for the state of Michigan and the National Association of Emergency Medical Technicians. Kocher's 15-year-old son, Matt, of Tinley Park, Ill., drowned in Lake Michigan off of a New Buffalo, Mich. beach in 2013.