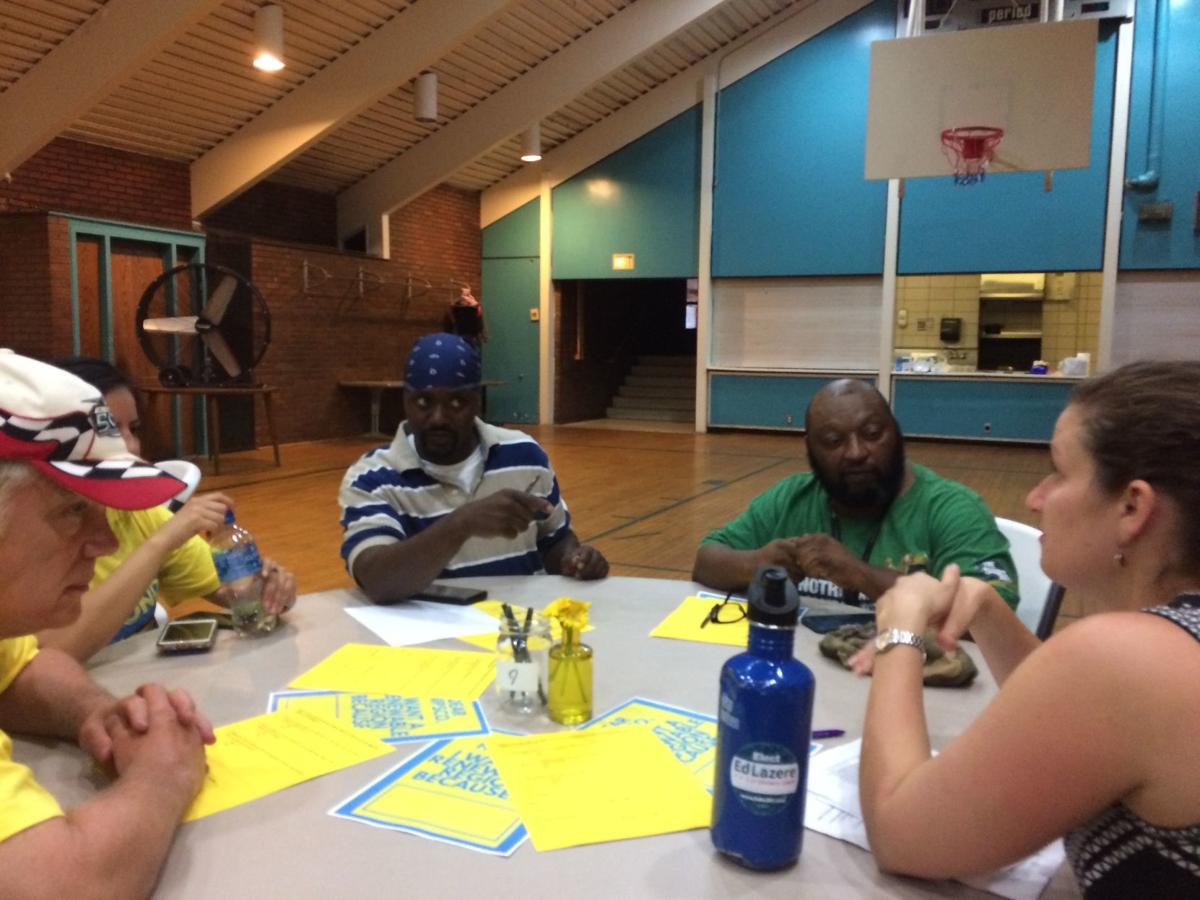 Alonzo Rupert, center, and Bruce Wren, center right, speak to organizers with the Sierra Club's Northwest Indiana Beyond Coal Campaign on Thursday during a meeting at the HOPE Community Center on Michigan City's West Side. 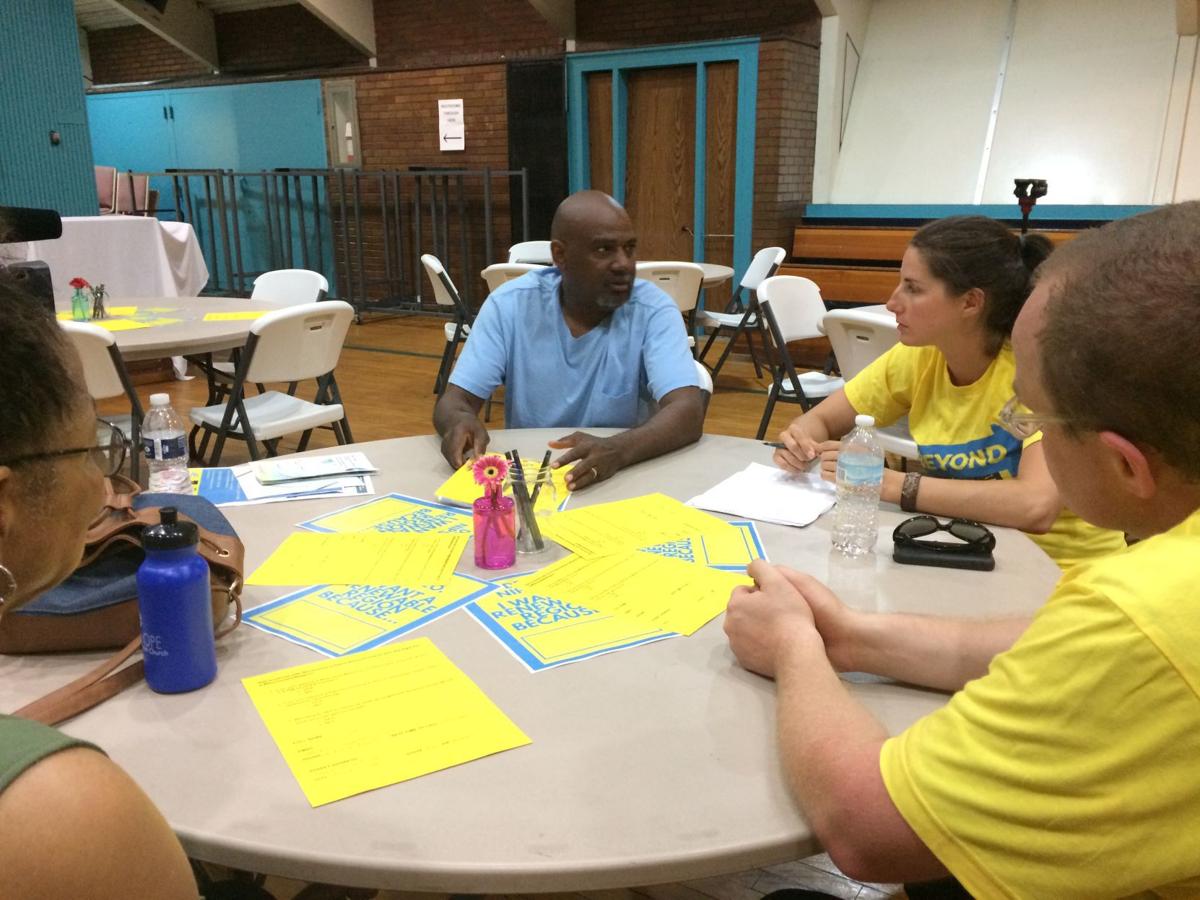 Albert Seay, center, speaks with other residents and organizers from the Sierra Club's Northwest Indiana Beyond Coal Campaign during a meeting Thursday on Michigan City's West Side.

MICHIGAN CITY — A small group of West Side residents gathered Thursday in the shadow of NIPSCO's power plant to discuss what a future without coal might look like for them.

Several of the 10 to 15 residents said they've lost an unusually large number of people to cancer, and they described a black dust that sometimes blankets their neighborhood and blows in their windows.

Members of the Sierra Club's Northwest Indiana Beyond Coal Campaign said the utility needs to do more to speed the transition to renewable energy sources.

Campaign organizers planned the meeting in Michigan City's West Side neighborhood, because they say NIPSCO is not doing enough to gather input from residents in neighborhoods most affected by its operations.

The utility is not holding meetings in the neighborhoods and has scheduled them midday, when working people can't attend, said Ashley Williams, a Sierra Club organizer with the Northwest Indiana Beyond Coal Campaign.

Organizers plan to announce more events in Gary and East Chicago and eventually take the information gathered directly to NIPSCO executives, she said.

NIPSCO is currently in the process of updating its 2016 Integrated Resource Plan, which calls for a 50 percent reduction in the utility's coal fleet by 2023. It held a meeting last spring in Merrillville, has a webinar set for July 24 and two more meetings planned this fall in Fair Oaks.

A NIPSCO spokesman said the Sierra Club and others are directly involved with its long-term planning process.

"Protecting the environment and human health is vital," spokesman Nick Meyer said. "Our goal is to identify a balanced path for affordable, reliable and environmentally sustainable energy for our customers."

NIPSCO meets state and federal regulations established by current and previous administrations, he said. The company has improved air and water quality by diversifying its energy portfolio, retiring some of its coal-fired generators, focusing on energy efficiency and upgrading its environmental controls, he said.

Albert Seay said he has had many friends from West Side who died from lung cancer, even though they never smoked cigarettes.

If residents really want to see change, they will need to stay committed and not back away as time passes, he said. One of the first changes he'd like to see is a reduction in the black dust that sometimes covers the neighborhood.

Bruce Wren said he goes fishing in the waters behind the Michigan City Yacht Club and once had to persuade his children not to swim when they arrived at the beach and found it littered with dead fish.

Still, Wren wondered what would happen if NIPSCO went away. Sierra Club members said NIPSCO won't go away, but it can make the shift to renewable energy sources faster than it's currently planning.

Alonzo Rupert said not many people talk about asthma, but the cancer rate in the community is "unreal."

"I got grandkids coming up," he said. "I want them to have a long, clean life. A healthy life."

Residents acknowledged any decommissioning of the coal-fired plant might cost the city jobs, but they said they were willing to accept the loss if it meant a healthier environment for the people in their neighborhood.

La'Tonya Troutman, of the LaPorte County NAACP, asked those gathered if they remembered the laser shows NIPSCO used to project on the side of its cooling tower in Michigan City.

All of the neighborhood kids used to look forward to the shows, which featured cartoons, she said. However, many still don't fully understand the real purpose of the cooling tower, or "cloud maker," as several residents referred to it.

Troutman said she now thinks the laser shows were a way to mask the plant's true effects on the community. Many residents think NIPSCO is a friend to the community, but Troutman takes a different view, she said.

"The negative is outweighing the positive," she said.

PORTAGE — Gasps could be heard Friday as a group touring the dunes with U.S. Rep. Mike Quigley, D-Illinois, looked down on the ruins of the ob…

CHICAGO — The Chicago River is getting closer to having a stretch of floating plants, wetlands, kayak piers and public walkways.

NIPSCO: Fourth of July emissions nearly all cleaned up

NIPSCO invites residents to weigh in on its 20-year plan

MERRILLVILLE — NIPSCO has submitted a long-range plan to state regulators that calls for shutting down Bailly Generating Station, in Chestert…

Alonzo Rupert, center, and Bruce Wren, center right, speak to organizers with the Sierra Club's Northwest Indiana Beyond Coal Campaign on Thursday during a meeting at the HOPE Community Center on Michigan City's West Side.

Albert Seay, center, speaks with other residents and organizers from the Sierra Club's Northwest Indiana Beyond Coal Campaign during a meeting Thursday on Michigan City's West Side.