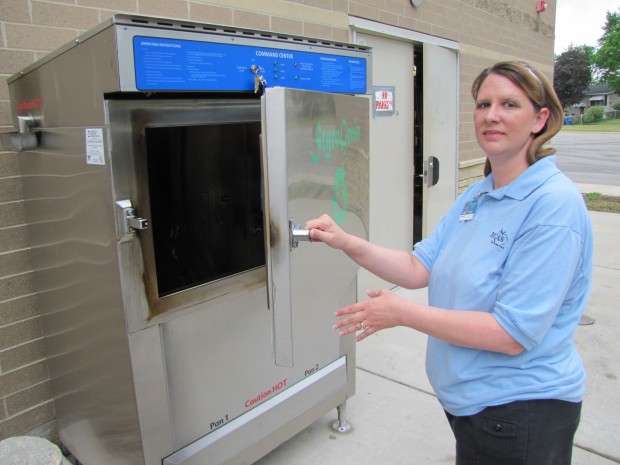 Pat Davids-Mockus, chef at Lake Hills Elementary School in Michigan City, shows off the StyroGenie, which is located outside the building. The StyroGenie turns foam lunch trays into paving bricks. 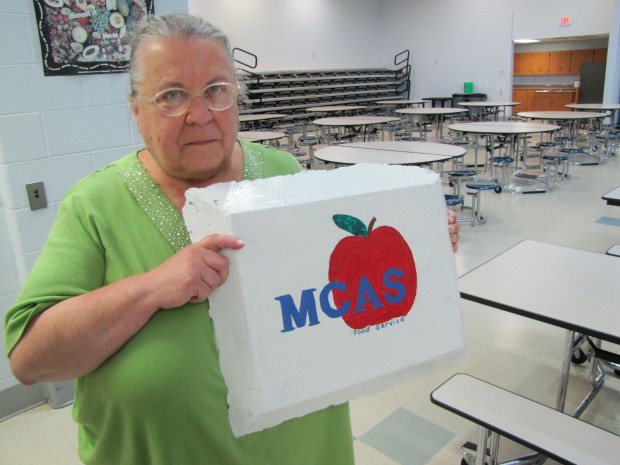 Lake Hills Elementary School teacher Shelley Deutscher poses in the lunchroom with a recently painted paving brick made from used Styrofoam lunch trays, and produced in the school's StyroGenie.

MICHIGAN CITY | Instead of sitting in a landfill for centuries, used Styrofoam school lunch trays are now being converted to paving bricks.

It's happening in Michigan City, home to one of just a few of the newly invented StyroGenies.

The 700 pound stainless steel StyroGenie is loaded every day or two with 600 Styrofoam lunch trays straight out of the trash at Lake Hills Elementary School.

Ten hours later, after undergoing a process called densification, the trays are converted into a single square brick that feels like glass or tile but is solid as a rock.

"I love it. It's a great learning tool for the kids," said Rebecca Reid, food services manager for the school nestled near the city's lakefront.

Densification involves removing air from Styrofoam and using heat to melt it into a liquid resin that, when cooled, forms two bricks from every 1,200 lunch trays.

The StryoGenie has been used for about a month and a second one is going to be placed at Pine Elementary School in the fall, said Kathy Kane, food services director for the Michigan City Area Schools.

The school's trash output in the cafeteria has gone down from 52 to 15 bags a day, she said.

Kane said the cost of the StyroGenie was $12,000 but it should pay for itself in two years from refuse disposal savings.

Shelley Deutscher, STEM coordinator at the school, said some of the bricks have been painted and placed in a small garden at the school for decorative purposes.

Other bricks are going to be used to make a walkway through the garden.

The city's street department also has been contacted to see if they can find some use for the bricks, said Reid.

In addition to promoting a safe environment, Deutscher said the Styro-Genie shows students what is possible if they open up their minds.

"We're looking at how we can prepare kids to be problem solvers and creative thinkers to solve some of the problems the world might have in the future," said Deutscher.

The monthslong debate over attendance at Washington Park seems to be heading to a conclusion.

Firefighters encountering smoke and flames showing from the second floor entered the front and back of the vacant structure at 1103 Franklin St.

Pat Davids-Mockus, chef at Lake Hills Elementary School in Michigan City, shows off the StyroGenie, which is located outside the building. The StyroGenie turns foam lunch trays into paving bricks.

Lake Hills Elementary School teacher Shelley Deutscher poses in the lunchroom with a recently painted paving brick made from used Styrofoam lunch trays, and produced in the school's StyroGenie.