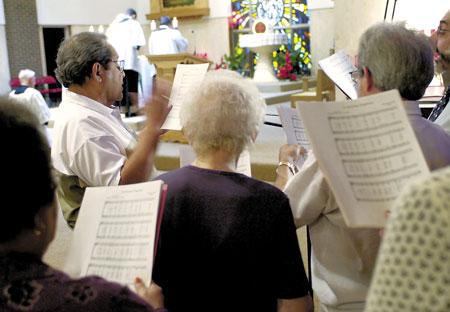 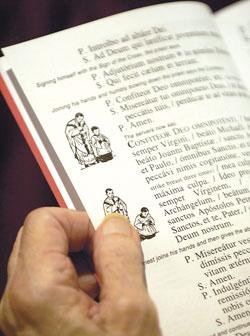 MUNSTER | Catholics who fondly recall the Latin Tridentine Mass can dust off their St. Joseph Daily Missals and use them again at the Carmelite Monastery in Munster.

This Mass, always said in Latin, was established as the official Mass by the Council of Trent in the mid 1500s. It remained so until the modern day Mass, the Novus Ordo (new order), was established by the Second Vatican Council in the late 1960s.

In 1988, Pope John Paul II decreed that parishes can hold Tridentine Masses if allowed by the local bishop.

"The Tridentine Mass was pretty much out of practice for about 20 years until it was restored" by the Pope, monastery spokesman Michael Gibson said.

Back then, a group of Catholics in the Gary Diocese asked the Bishop, the late Norbert Gaughan, to bring it back. So in the early 1990s, he asked the monastery to have a Tridentine Mass for the diocese.

The monastery's prior, or leader, at that time, the Rev. Thomas Balys, agreed and the Tridentine Mass made its local comeback.

The monastery, now led by a new prior, the Rev. Jacek Palica, also celebrates the Masses in English and Polish every Sunday.

The Tridentine and Novus Ordo Masses contain the basic elements established by Christ on Holy Thursday, the Rev. Michael Veneklase said. "The essence is the same. It's the holy sacrifice of Christ."

Ironically, Latin remains the official language of the Catholic Church.

"Every document of the church is not official until it is established in the Latin language," Veneklase said.

The Mass draws a strong weekly flock at 5 p.m. each Saturday at the monastery, 1628 Ridge Road.

Joseph and Antoinette Figarelli regularly make the trip from St. Joseph, Mich. to the monastery.

"The Munster monastery had the only one in a 75 mile range, said Antoinette Figarelli."

Has the popularity of the Tridentine Mass set a trend?

"Not at all," said the Rev. Brian Chadwick, communications director for the Gary Diocese. "I'm not aware in our diocese of any hungering or craving for more than that's been generally expressed."

Very few Tridentine Masses are said in Indiana, he said. "Indianapolis or Lafayette may have one, too." On a national level, there are signs of interest. "You do see it in certain places," he said.

Veneklase noted that some Catholics prefer Latin, but not the older form of the Mass. Some like the Latin and the Gregorian Chant, but are uncomfortable with the Tridentine rite.

"I contacted the pastor of one parish" and arranged for a Novus Ordo Mass in Latin every Sunday, Veneklase said.

The post goes on to announce there will be no 2021 season and, "due to the continued lack of volunteer participation we have made the decision to disband Portage Little League in its entirety."

A 43-year-old Valparaiso man is accused of repeatedly exposing himself to a neighboring child, including one instance of using a laser pointer to direct the girl's attention to his genitals, according to newly-filed charging documents.

Jessika Lile broke down in tears as she sat on the stand listening to the hysterical 911 call she made in the moments after her husband, 42-year-old Nicholas Lile, was shot to death Jan. 3 in their home.

"What brings you to the center of this corn field?" the officer asked.

When the man attempted to remove the intruder, the young man exited the vehicle and pulled a gun, police said.

An adult and juvenile were trapped inside the car and first responders extricated them from the wreck.

Members of the Lake County Council are suing the state of Indiana, claiming its vehicle emissions testing requirement that applies only to Lake and Porter counties is unconstitutional.

1 dead after crashing into ditch in Dyer, police say

The crash involved a single-vehicle that wrecked off of Sheffield Avenue.

"East Porter (School Corp.) is sincerely apologetic that this incident has taken place," Superintendent Aaron Case said in an email to The Times. The child was found safe in a relative's car.

THE TIMES Choir leader Peter Ayala, top left, sings with the Carmelite Monastery Chapel choir during the Tridentine Mass. The traditional Latin Mass is celebrated at 5 p.m. Saturdays at the Carmelite Monastery off Ridge Road in Munster.
© Copyright 2021 NWI Times, 601 W. 45th Ave. Munster, IN | Terms of Use | Privacy Policy
Powered by BLOX Content Management System from TownNews.com.
You don't have any notifications.