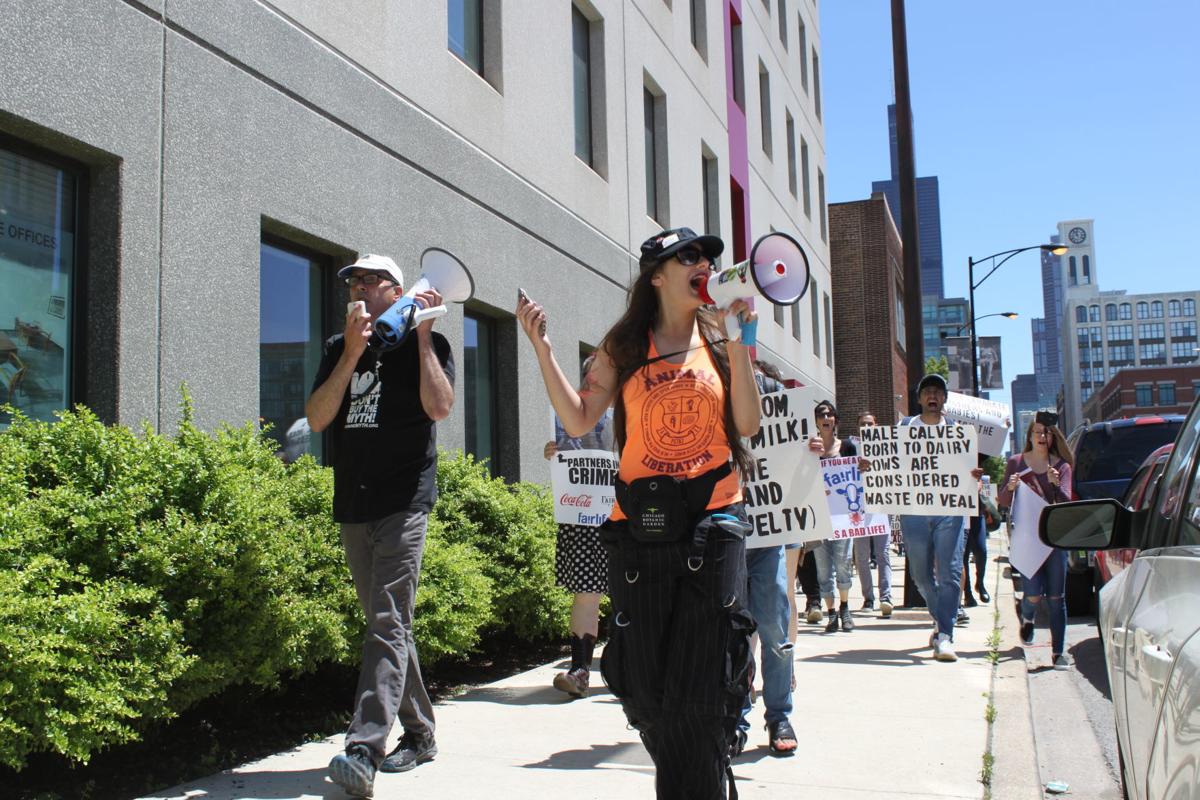 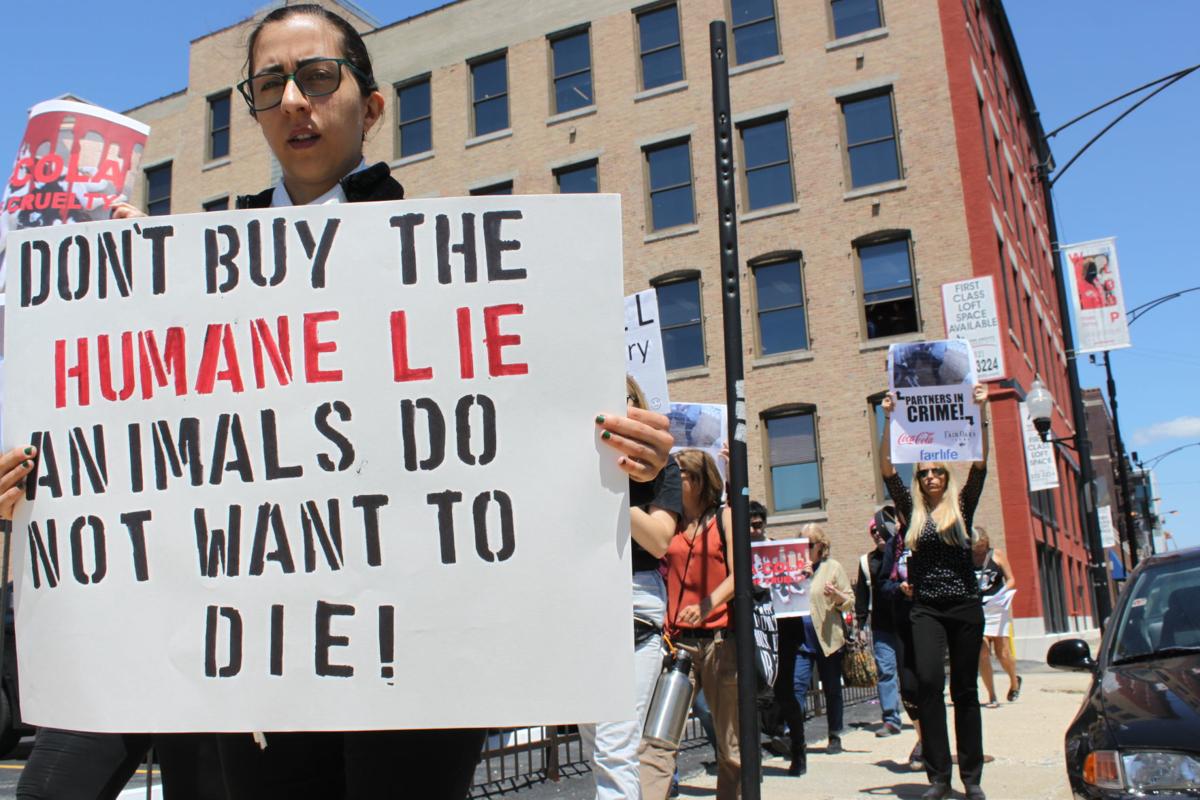 A protester marches June 10 with other activists near the Fairlife corporate offices in Chicago. 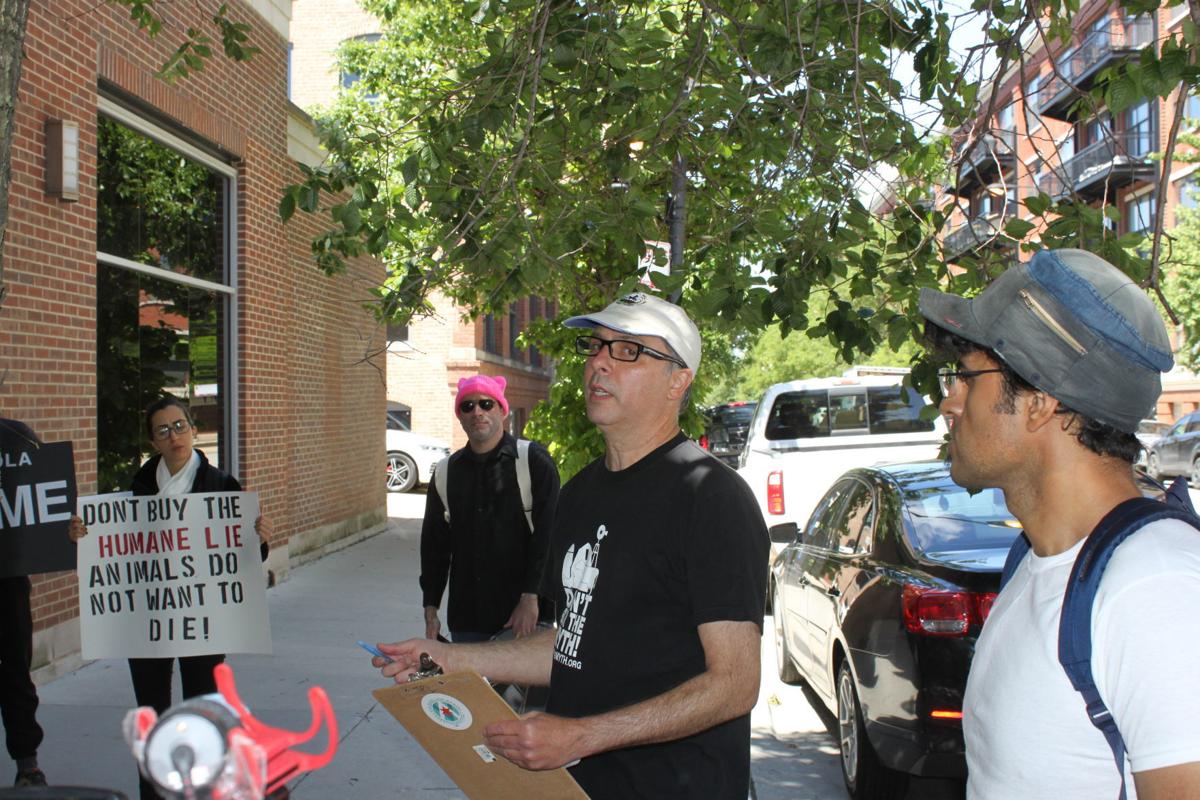 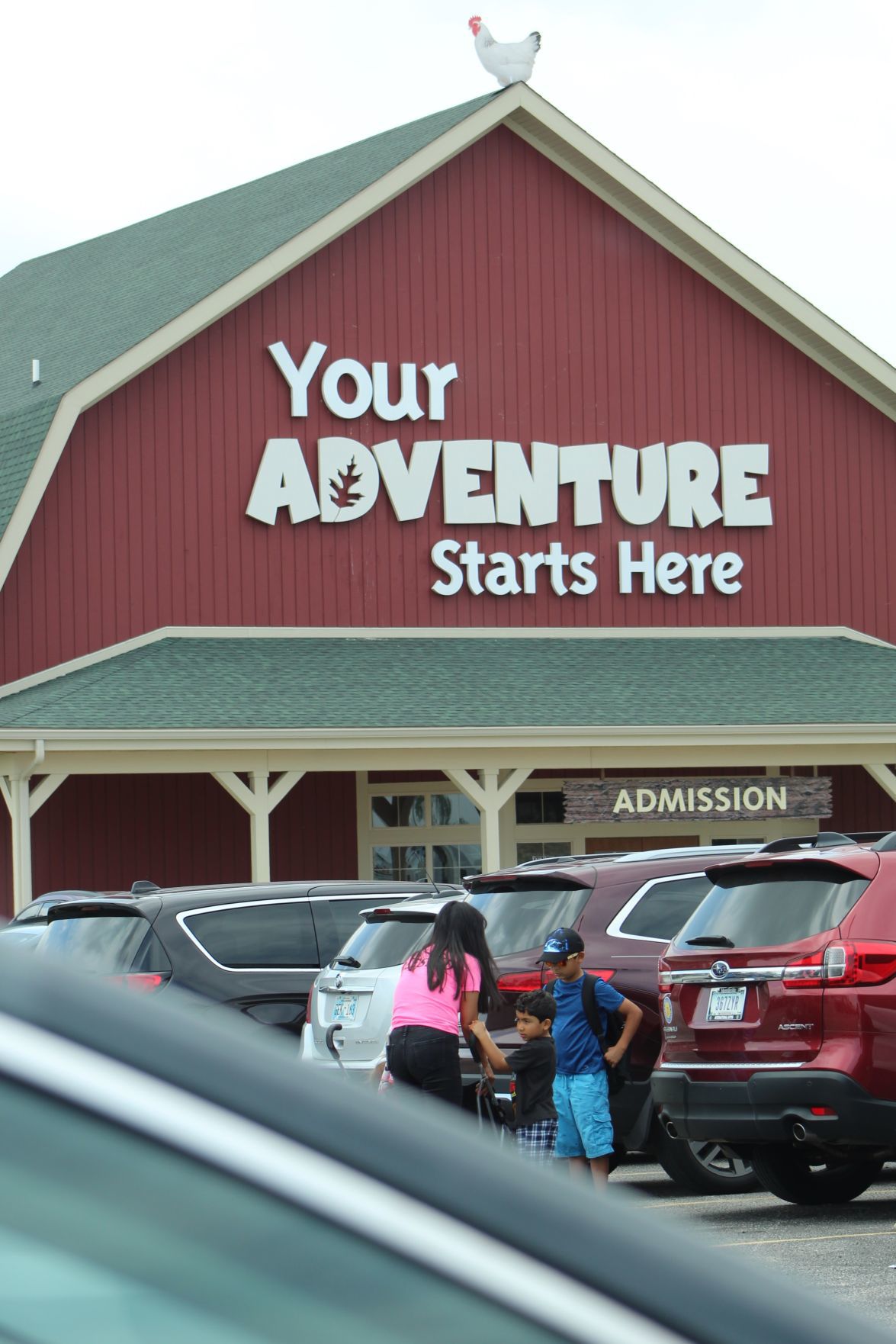 Three individuals are being charged in connection with the investigation of multiple videos appearing to document animal cruelty at Fair Oaks Farms, the Newton County Sheriff's Department announced Monday.

The charges being brought are for the beating of a vertebrate animal, a class A misdemeanor, according to the news release from the Newton County sheriff's office.

The office plans to release the names of the three individuals within 24 hours, according to the release.

Further details of the case are not being released while the investigation is active.

Also on Monday, animal rights activists converged on Fairlife’s Chicago headquarters to protest the treatment of cows at Fair Oaks Farms and draw attention to what they called “systemic” abuse in the dairy industry.

Organized by Chicago-based nonprofit Free From Harm, the demonstration drew about 40 protesters to the Fairlife offices in the West Loop.

In multiple statements since the release of ARM’s investigation, Fair Oaks founder Mike McCloskey has denied knowing that calves were being mistreated on the farm. He described the abuse as coming from only four rogue employees who were acting in violation of Fair Oaks' policies regarding animal welfare.

Free From Harm director Robert Grillo dismissed McCloskey’s explanation, calling it an attempt to “save face” by painting a “handful of workers as scapegoats.” Animal abuse is pervasive in the dairy industry, at farms large and small, he said.

Fair Oaks Farms is the largest in a co-op of more than 30 dairy farms that supply Fairlife, a national brand of high-protein, high-calcium milk. The Newton County farm is also a popular tourist and school destination, complete with an on-site hotel and Dairy Adventure exhibit.

Fairlife said in a recent statement that in light of the footage made public last week, the company will conduct audits of other dairy sources. Dairy production featured in the initial ARM video makes up less than 5% of Fairlife's milk supply, the company said.

"Approximately 30 dairies support Fairlife; therefore, we are visiting all supplying dairies in person and conducting independent third-party audits within the next 30 days to verify all animal husbandry practices at the farms, including all training management and auditing practices," Fairlife said in a statement. "We will also continue to work with Fair Oaks Farms to ensure specific actions are taken to address this situation and uphold our high standards for animal care."

Both Fair Oaks and Fairlife have received significant blowback since ARM released its videos and an accompanying report of investigation.

Last week, a number of local grocers, including Jewel-Osco, Tony’s Fresh Market, Pete’s Fresh Market, Strack & Van Til and Family Express pulled Fairlife products from their shelves. Another domino fell over the weekend, with Midwest grocery chain Fresh Thyme Farmers Market announcing it would no longer sell Fairlife at any of its 75 stores.

The corporate boycott of Fairlife products could lead to wider public awareness of animal cruelty in the dairy industry, Grillo said.

“The public is either going to support this industry, or they will find alternatives like we have,” he said, pointing to the growing popularity of vegan dairy substitutes and meat replacements such as Impossible Foods and Beyond Meat.

As Grillo led fellow protesters in warm-up chants during Monday's protest, Jodie Wiederkehr stood on a nearby street corner passing out flyers calling for a boycott of Coca-Cola, which markets and distributes Fairlife nationally. Wiederkehr, the campaign director for the Chicago Alliance for Animals, doubted the abuse uncovered at Fair Oaks was an isolated case.

“It happens every time we can get an undercover investigator inside,” she said. “It doesn’t matter if its an educational farm, a family farm — if there’s animals, there’s abuse.

“We’re just trying to educate the public about the extreme violence that happens (on these farms)."

Free From Harm plans to hold a second rally June 17 at the Fairlife offices in Chicago.

FAIR OAKS — One of the men accused of abusing animals at Fair Oaks Farms was arrested Wednesday, while the other two are still being sought by…

A protester marches June 10 with other activists near the Fairlife corporate offices in Chicago.