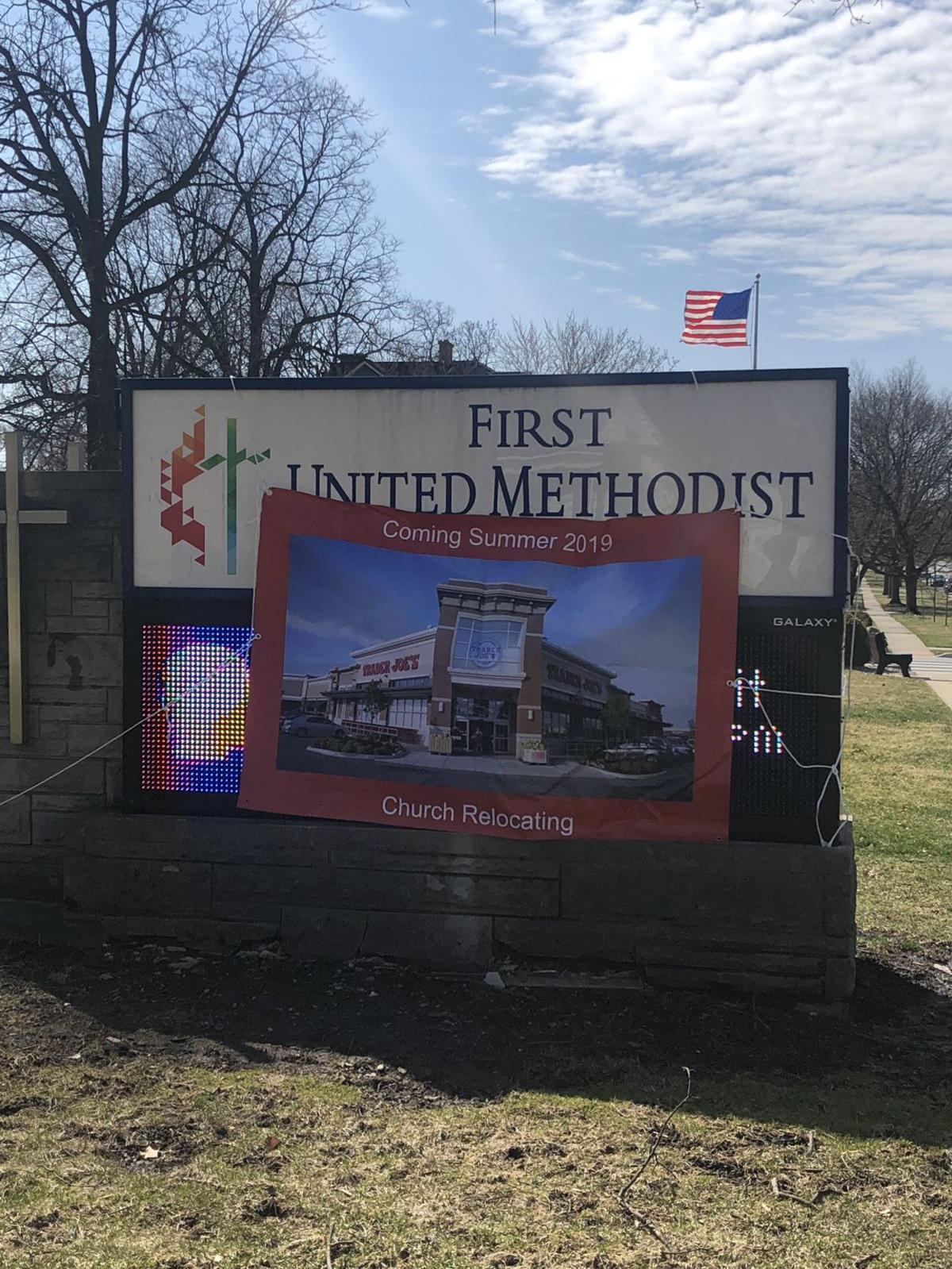 A sign claiming The First United Methodist Church of Crown Point was moving to make room for a Trader Joe's was an April Fool's Day prank. 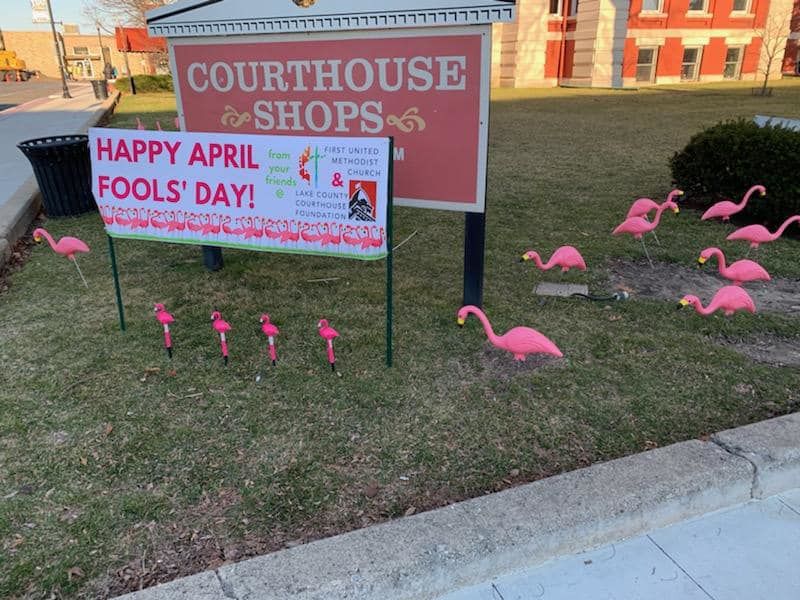 A sign posted outside The First United Methodist Church of Crown Point Sunday night caused a stir and got people talking by claiming the downtown church was relocating and a Trader Joe's was coming in the summer of 2019.

It was of course an April Fool's Day prank, part of a prank war between the church and the Lake Court House Foundation Inc.

First United Methodist Church placed 55 pink flamingos outside Old Lake Court House in downtown Crown Point for April Fool's Day, prompting the foundation to retaliate with a practical joke of its own.

"As I was driving past the courthouse, I decided that what they really need is flamingos," Senior Pastor Mark Wilkins said. "We did flamingos because rubber chickens don't stick up well in a lawn. It's silly and fun and meant to bring a smile to people's faces. A little bit of mirth is a good thing."

Volunteers with First United Methodist Church stood around the courthouse Monday morning handing out free coffee and doughnuts "to balance it out."

Wilkins hails from a family of pranksters and has been doing practical jokes since he was a kid, once tricking a church administrator into thinking he would miss a funeral he was supposed to preside over while the family was outside waiting.

"My poor sainted parents were the victims of many practical jokes," he said. "But if you live by the practical joke you must die by the practical joke, which is why I appreciate what the Court House Foundation did. It's great to be part of a church and community that has a sense of humor and some whimsy. Everything is often so serious in life, and it's a great day when you can be silly."

The Lake Court House Foundation preemptively put the Trader Joe's sign outside the church two blocks away under the cover of dark Sunday night.

"We got wind of what the church was planning and decided to surprise them back," Court House Managing Director Carrie Napoleon said. "It's gotten a lot of attention because I think everybody would like to see a Trader Joe's in Crown Point though not in that particular spot."

Napoleon said they hoped people got a kick out of it

"The flamingos cracked us up," she said. "It was fun. I haven't done something like this since college. It was really meant to fool anybody, but it's more fun that it did. I would be highly surprised if Mark let this slide next year."

The church has gotten Facebook comments and calls about whether it's really moving, including from a city council member who had been contacted by several concerned parishioners.

"We could not be more delighted by what they did and are telling people to check their calendars," Wilkins said. "It was hilarious. They did a great job on us. I can neither confirm nor deny that we might be planning something for next year."

Hammond also tried to get in on the April Fool's Day fun with a press release about making the Lakefront Park Beach on Lake Michigan clothing-optional. The city billed as an "ingenious and forward-thinking strategy" to draw tourists by giving city beaches a more "European feel."

“It is a perfectly mature form of sunbathing and promotes increased self-esteem while also encouraging healthy living for all those who come to our beaches,” Hammond Mayor Thomas McDermott Jr. said in the press release. “We plan to start our 'clothes optional' beach program on May 25th to coincide with the annual opening of city beaches.”

McDermott said many people fell for the ruse.

"We got a lot of calls from constituents," he said. "People wanted to know how we had the balls to do it."

Dig the Dunes in Porter County posted that its founder Eve Wierzbicki stumbled upon a glass necklace thought to have belonged to Diana of the Dunes, ending the post with "how many of you did we get… maybe just for a second?"

A German manufacturer plans to make tools and dies at a new Michigan City operation.

Michigan City named one of the best small cities for business

Michigan City was named one of the top 100 small cities for business in the ChamberofCommerce.org's 2019 Best Cities for Small Business rankings.

The Firefly Ball at the Michigan City lakefront Saturday will benefit the city's Washington Park Zoo.

Little splashes, big-time fun: An inside look at the new $34 million Southlake YMCA

CROWN POINT — With its grand opening roughly a week away, the final touches are being added to the new Dean and Barbara White Southlake YMCA i…

First Midwest Bank to buy back $180 million of stock

First Midwest Banking is buying back $180 million of its stock.

A panel discussion and free networking event later this month will focus on how women can be successful in today's workplace.

First Midwest Bank has secured federal approval to buy Bridgeview Bank, a Bridgeview, Illinois-based bank with 13 locations across the greater…

Northwest Indiana has long pined for a Trader Joe's, a trendy supermarket chain known for selling international, gourmet and specialty food for low prices that has several locations in Chicago but none here.

The sign outside of the Dean & Barbara White Southlake YMCA was the latest April Fools' Day prank pulled by two members of the Lake Court House Foundation, Inc.

A sign claiming The First United Methodist Church of Crown Point was moving to make room for a Trader Joe's was an April Fool's Day prank.