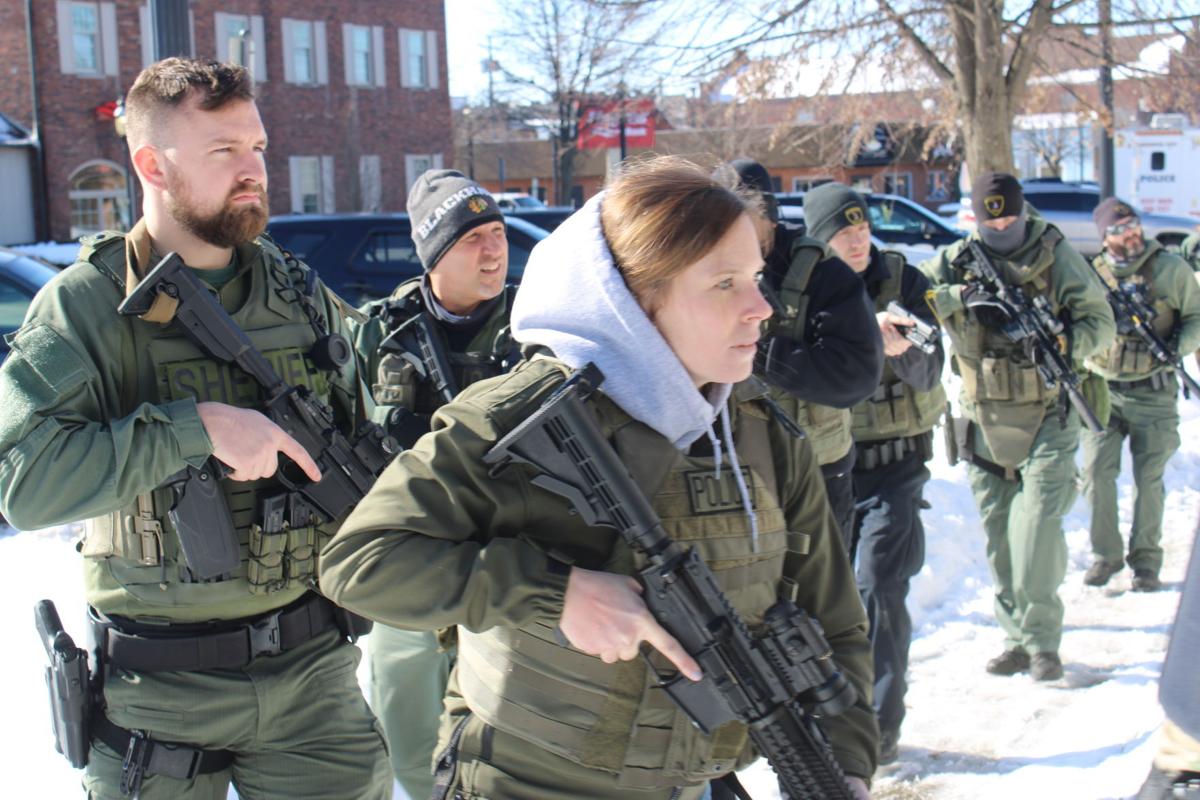 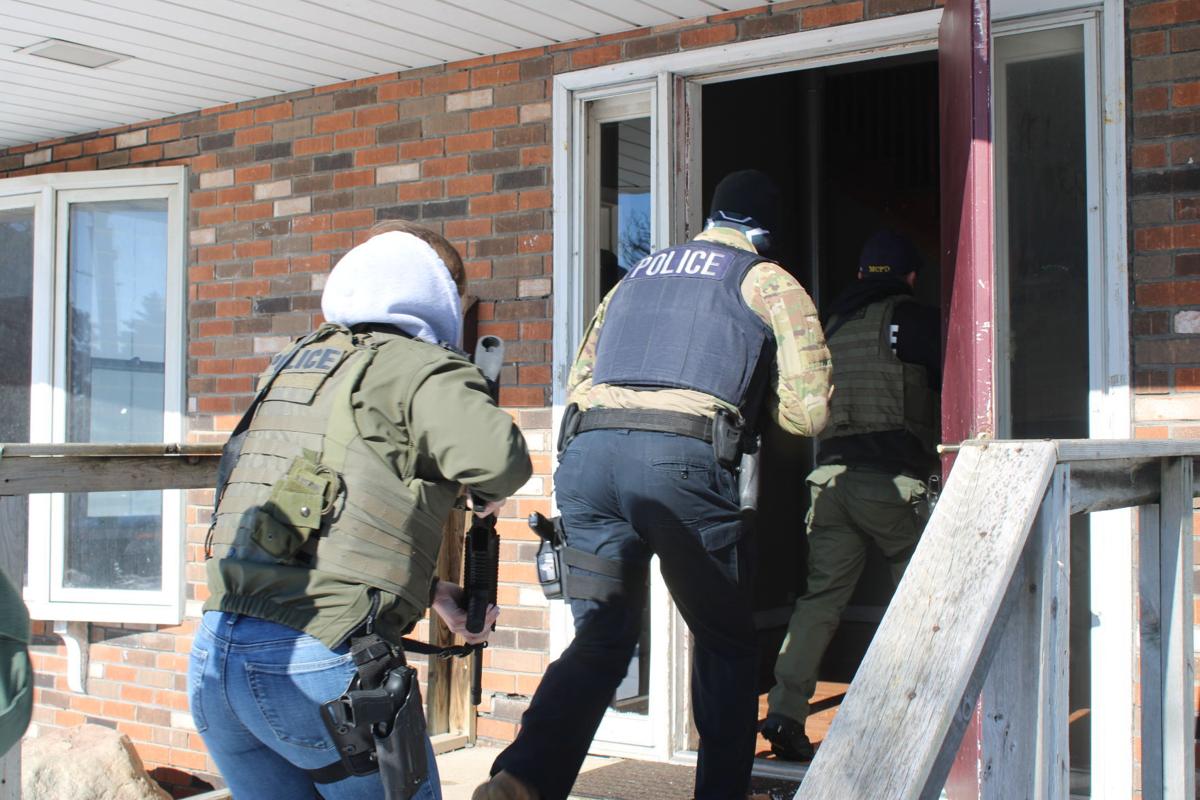 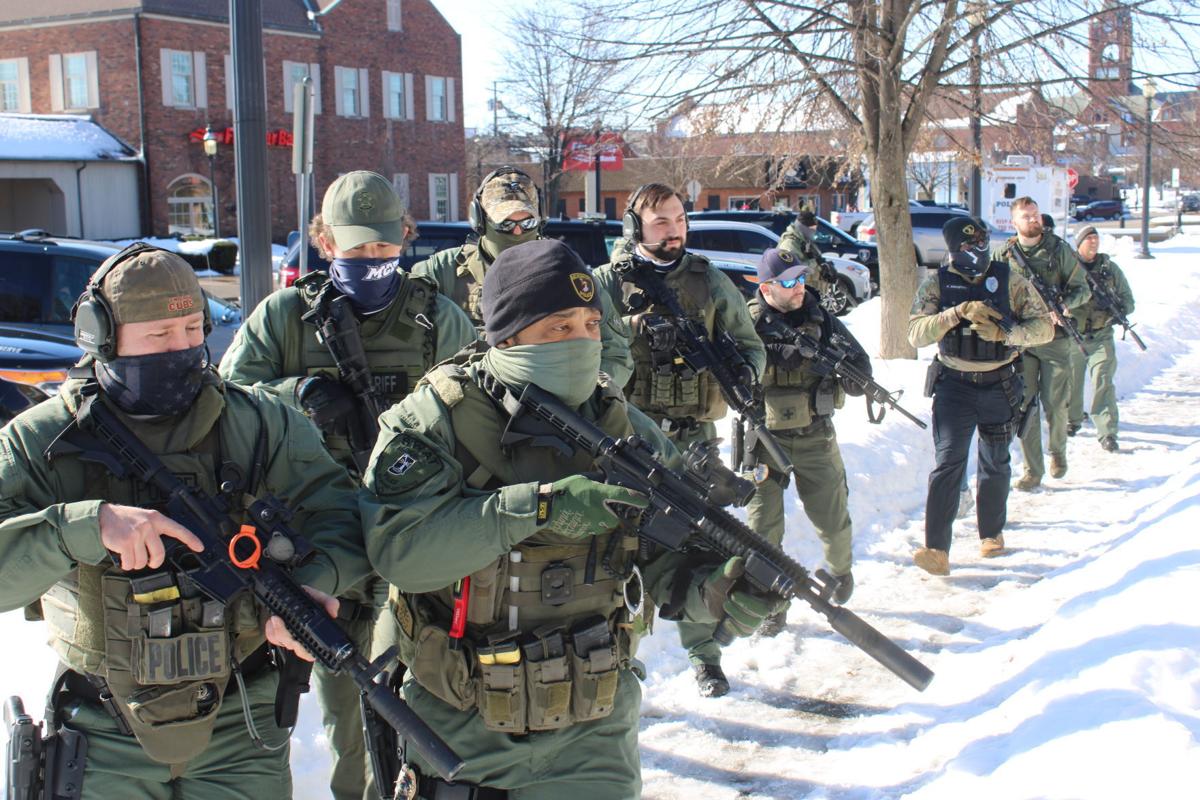 SWAT team members prepare to enter a vacant house in LaPorte for training to stay sharp on their emergency response skills. 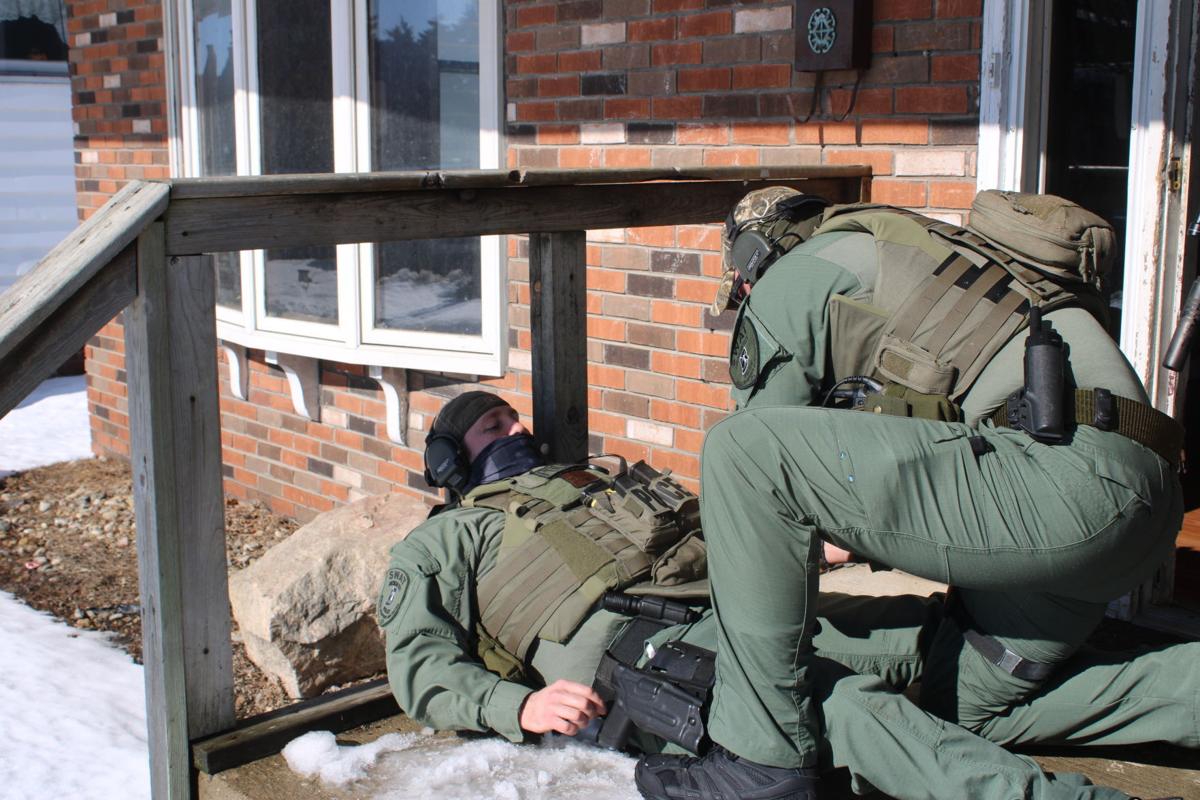 Michigan City Police Officer Mike King pretends to be shot while tended to by a fellow SWAT team member during a Tuesday training session.

LAPORTE — Police officers with semi-automatic weapons shouted “get your hands up.”

They also responded to reports of fellow officers being shot.

All of the activity occurring Tuesday inside vacant homes was strictly for training by members of the Special Weapons and Tactics, or SWAT, Unit from the Michigan City Police Department and the Emergency Response Team at the LaPorte County Sheriff’s Office.

For about four hours, officers in full response gear practiced drug raids and other high-risk situations at four empty dwellings on State Street, Park Street and John Street in LaPorte.

More than a dozen officers discussed strategy before marching inside to sharpen their skills.

Their mission, as in real life, was making apprehensions without anyone getting hurt, and reacting properly when there was an injury.

Their weapons were not loaded.

“It’s as realistic as we can make it in a training scenario without actually having live fire,” said Cpl. Mike King, a SWAT training coordinator for Michigan City Police.

The joint practice sessions are held twice a month, with sites rotating between Michigan City and LaPorte.

Michigan City Police Cpl. Nick Krause said drills include officers locating suspects wanted for major felonies hiding inside a residence, reacting to someone with a gun, and freeing hostages.

“We do every circumstance you can possibly come up with,” he said.

Krause said SWAT members respond to actual situations a dozen or more times a year, and rehearsals help with whatever they might encounter next in real life.

“You just never know what you’re going to walk into in a house,” he said.

No doors were forced open, as they are sometimes in drug raids. Officers were also careful not to disrupt or damage anything on the inside.

The owner of the properties gave permission for the training before allowing new tenants to move in.

King said the conditions were still excellent for practicing strategies designed for the safety of everyone involved when it truly counts.

“We want to get in and get out as quick as possible,” he said.

Keri Devries, remembers her husband, Nicholas Devries, as a loving husband and dedicated father of four. It has been two years since his death on U.S. 41.

A jury awarded a Valparaiso woman $43.5 million after she was rear-ended by a semi-truck five years ago while waiting at a traffic light on Ind. 49 at Gateway Boulevard, according to her attorney Kenneth J. Allen.

Hotel employee charged after tipping off guest that police were there to nab him, officers said

"The search warrant for his room was subsequently executed, wherein narcotics, U.S. currency and paraphernalia associated to the sale/distribution of illicit drugs were located," police said.

The Porter County Sheriff's Office announced Friday it opened a missing persons investigation for a 22-year-old mother and her 4-year-old daughter from Valparaiso.

SWAT team members prepare to enter a vacant house in LaPorte for training to stay sharp on their emergency response skills.

Michigan City Police Officer Mike King pretends to be shot while tended to by a fellow SWAT team member during a Tuesday training session.