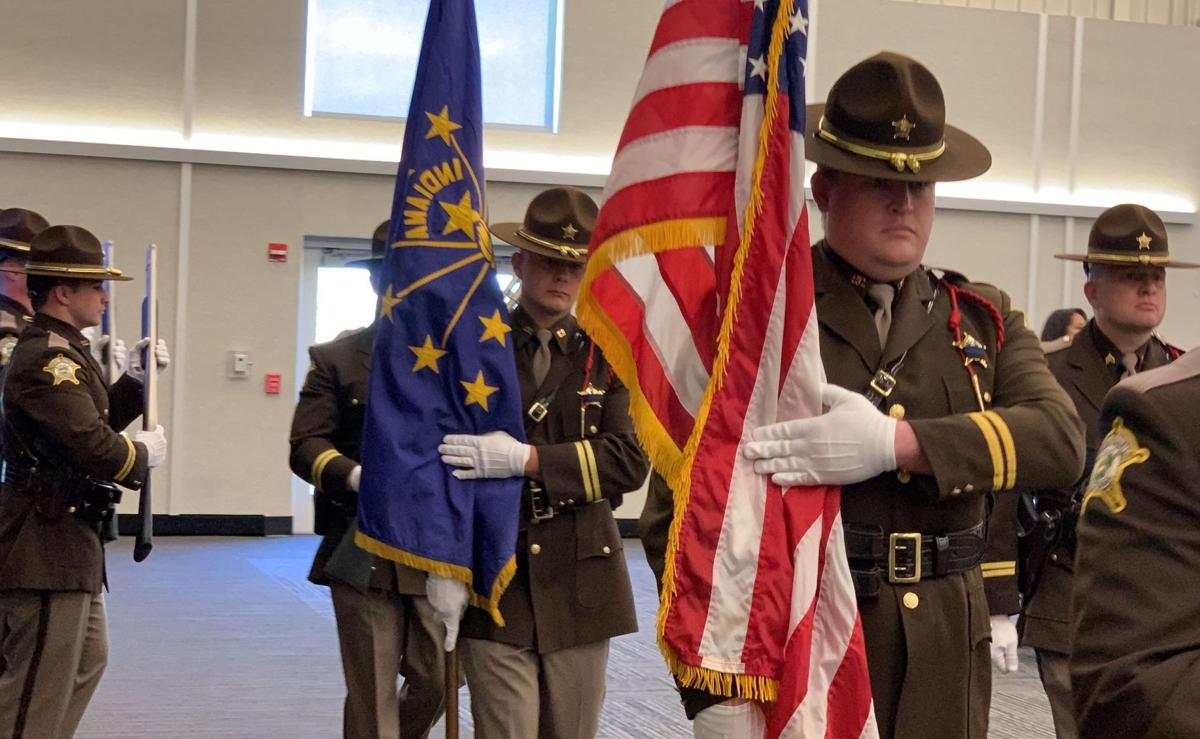 Members of the Porter County Sheriff's Department honor guard retire the colors after a memorial service for fallen officers Wednesday at the Porter County Expo Center. The U.S. flag is carried by Michael Kurz, the Indiana flag by Michael Steege. Sgt. Brian Dziedzinski is shown at right. 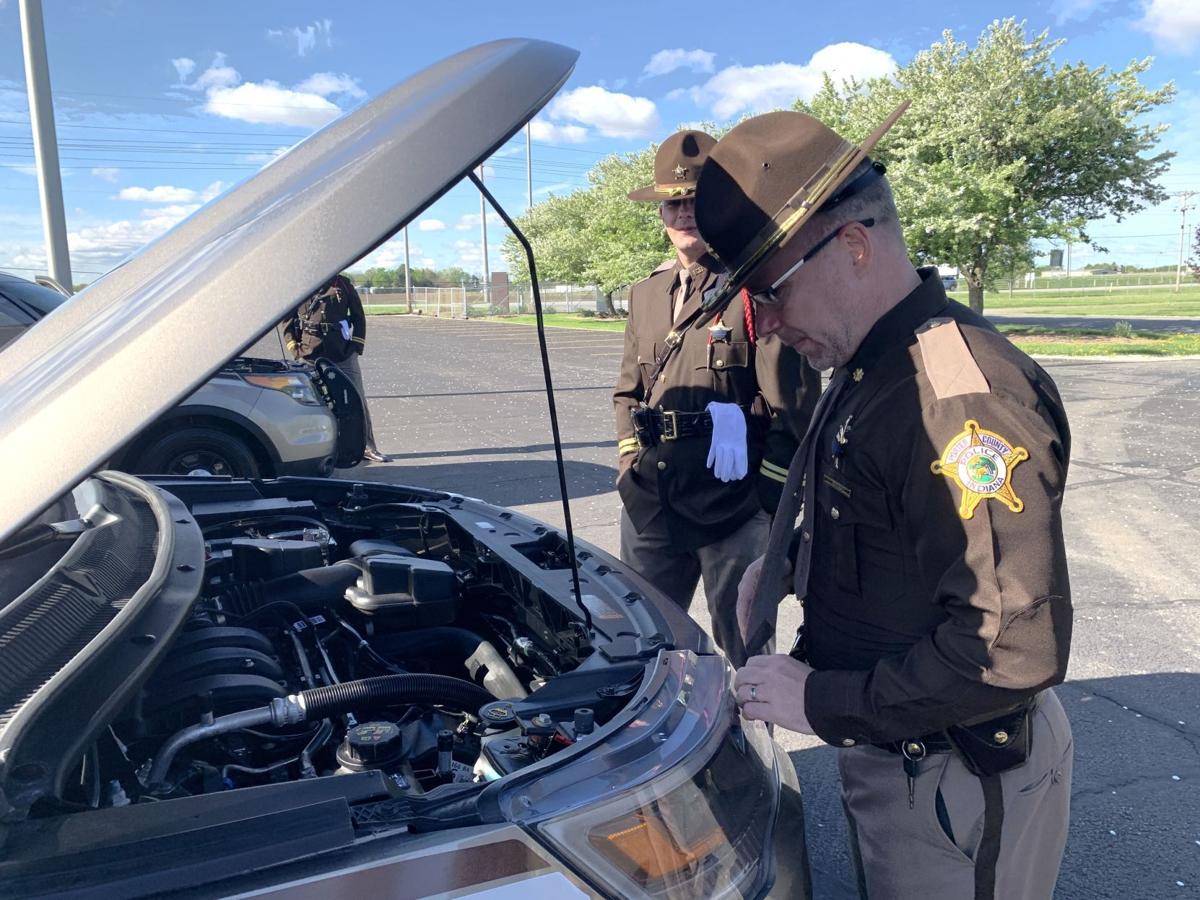 Maj. Gary Gear inspects an officer's car during the Porter County Sheriff's Department's annual inspection Wednesday. Officers make sure even the engine shines for the annual inspection. Some of the vehicles have as much as 200,000 miles on the odometer.

VALPARAISO — The Porter County Sheriff’s Department paid tribute to the department’s four officers who have died in the line of duty, and one who died while off duty.

“2020 was a tough year for everyone, and law enforcement was no exception,” Sheriff David Reynolds said.

In addition to having to deal with COVID-19 exposure like other first responders, police officers were sharply criticized by civil rights activists. Some called for defunding the police. “There are questions about the very need for law enforcement,” Reynolds noted.

“Take time to remember those who have lost their lives to serve those they have sworn to protect,” Reynolds said.

“It’s imperative for our new officers to see who is in this room because we work with everyone on a daily basis,” Reynolds said.

In the past two years, since the last memorial service was held, the department has hired 12 new police officers and 22 new correctional officers.

“Nobody went through more than our people in the jails and prisons,” Reynolds said.

Capt. Ryan Taylor was named 2020 Correctional Officer of the Year by the Indiana Sheriff’s Association after he created a safer booking process because of COVID-19. New inmates are subject to a 14-day quarantine as well. Taylor’s procedures have been adapted elsewhere.

On Feb. 21, Lt. Eugene Lasco, a correctional officer at Indiana State Prison in Michigan City, died after he was fatally stabbed by an inmate.

“The day of the funeral, I remember seeing uniform after uniform with a Porter County patch on it,” Carter said. “It still gets me choked up even thinking about it.”

It was the first time Carter had lost an officer in the line of duty.

“You’re doing it right here. This is the best county in the state for criminal justice,” he said.

County Council President Jeremy Rivas promised to provide officers with the training and tools they need.

“We’re going to fund a safe work environment,” he said.

“No one goes into police work for the money, nor do they put on a uniform expecting a life of ease,” Monteuffel said.

Chaplain Jay Birky reminded officers that their family makes that sacrifice with them.

Carter urged the officers to not neglect their mental health.

• Officer Edward Blakely, 47, was ambushed and killed Nov. 28, 1961, while investigating a suspicious vehicle.

• Robert Hardesty, former commander of the Porter County Sheriff’s SWAT team and a member of the FBI SWAT team, suffered a fatal spinal injury June 2, 2005, from a fall during a training exercise at FBI headquarters.

• Officer Phillip Pratt, 24, suffered fatal injuries from a motorcycle crash while off-duty on May 16, 2012.

• Robert “Bob” Ransom, a retiree from the Porter County Sheriff’s Department, wa a jail officer in Gregg County, Texas, when he lost his life Sept. 30, 2016, while assisting other officers in saving an inmate.

This was the first time the entire fest had an evacuation, said Pierogi Fest chairman and co-founder Tom Dabertin.

After much of Valparaiso as under a boil advisory, the order was lifted Saturday afternoon.

Authorities found the man, who was cooperative with officers and was found to be legally carrying his firearm. No threats of any kind were made.

Members of the Porter County Sheriff's Department honor guard retire the colors after a memorial service for fallen officers Wednesday at the Porter County Expo Center. The U.S. flag is carried by Michael Kurz, the Indiana flag by Michael Steege. Sgt. Brian Dziedzinski is shown at right.

Maj. Gary Gear inspects an officer's car during the Porter County Sheriff's Department's annual inspection Wednesday. Officers make sure even the engine shines for the annual inspection. Some of the vehicles have as much as 200,000 miles on the odometer.