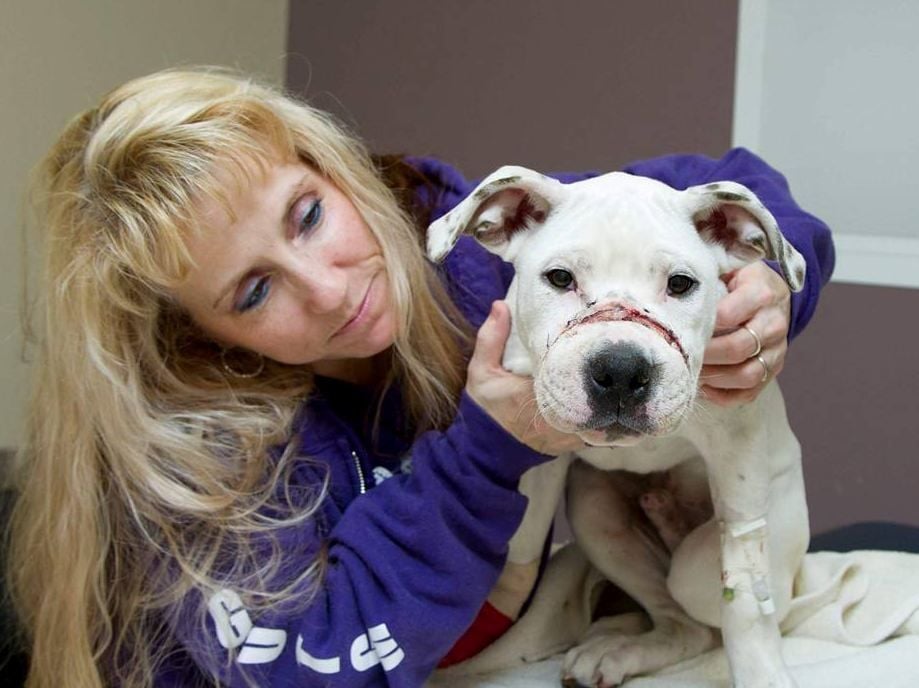 Christmas Chance, a 4-month-old pit bull, was discovered Christmas evening in Michigan City with his muzzle bound by electrical tape and both legs broken. He was taken to the North Central Emergency Veterinary Clinic in Westville for treatment. 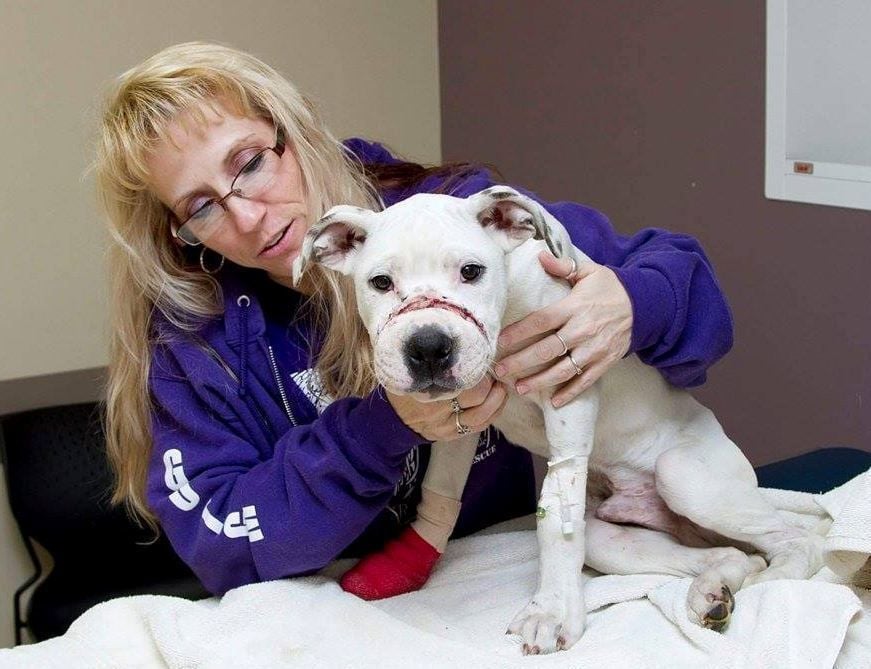 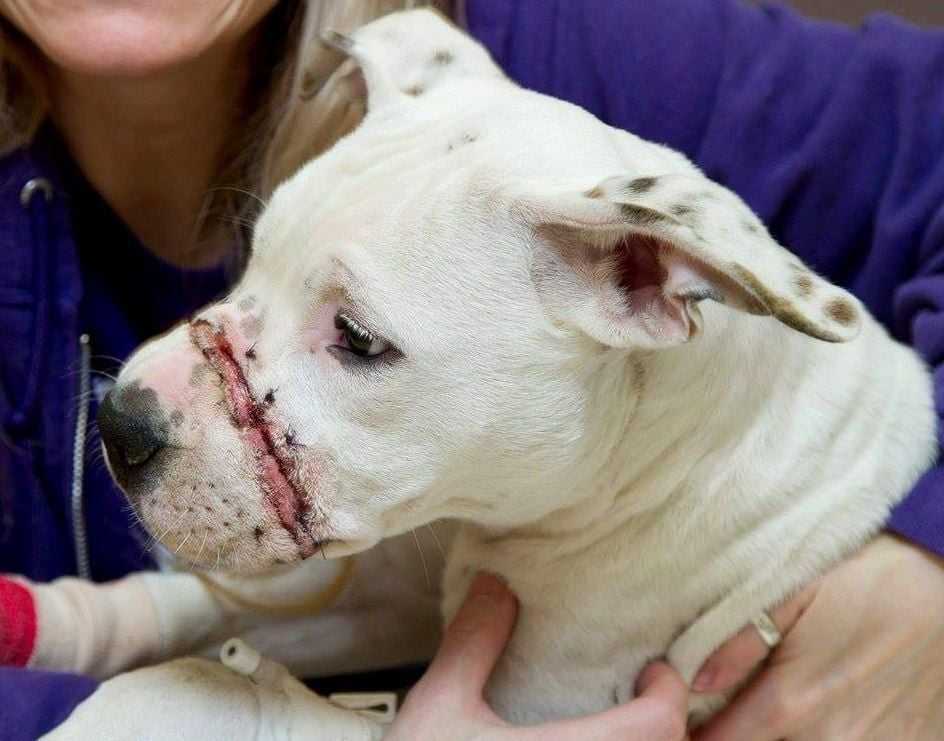 Michigan City Police are investigating the alleged mistreatment of a 4-month-old pit bull puppy rescued Christmas evening. Someone had taped shut his muzzle and two of his legs are broken. 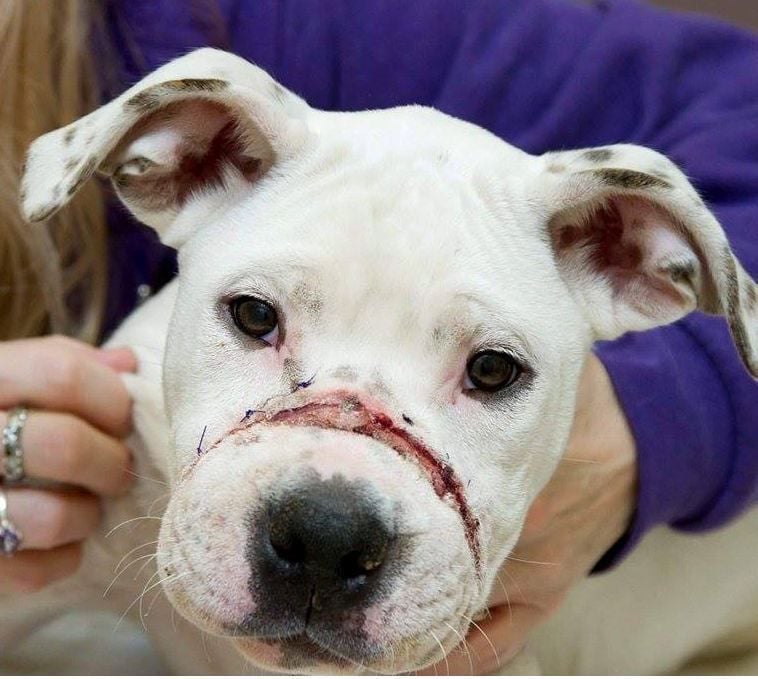 Chance Christmas, a pit bull puppy, was badly abused in December 2015. He was found Christmas evening with his muzzle taped shut and two broken legs.

Through the open gate walked a sight they never expected to see.

Germain said they heard “wheezing” behind them, and when they turned around, they saw a white pit bull puppy — its mouth strapped shut with black electrical tape — stumbling up to them.

“He couldn’t breathe through his mouth,” said Germain, of Michigan City. “But we didn’t want to hurt him trying to take off the tape.”

Germain and her friends immediately took the dog to the North Central Emergency Veterinary Clinic in Westville. Staff there filed a report with the Michigan City Police Department, which is investigating the case.

“He smelled like rotting flesh, and we could see all his bones” Germain said. “But he just wanted love — he was really sweet. We didn’t want him to die, so we got help as quickly as possible.”

At the clinic veterinarian Maggie Sharpe started intravenous pain medications and carefully unwrapped the dog’s taped muzzle. Cut, swollen and infected lips and gums oozed green discharge, indicating his mouth had been taped shut for about two days. The dog’s X-rays showed both his back legs had been broken.

Sharpe, who aged the puppy at about four months, has no doubt about the cause.

“It’s not a typical fracture from being hit by a car,” Sharpe said. “It’s abuse of some sort.”

Despite the injuries, Sharpe felt the dog could be saved.

“He was a good boy the whole time,” Sharpe said. “He was wagging his tail when we tried to take his temperature and being a puppy still. That’s why we wanted to give him a chance.”

She contacted the Guardians of the Green Mile, a Portage-based dog rescue, to help. Since Sherri Christopher founded GOTGM in April 2013, the group has rescued hundreds of stray and abused dogs and found them homes.

When she heard about the puppy, Christopher didn’t hesitate to accept financial responsibility.

“He’s a little baby, how can somebody do that?” asked Christopher, of Portage. “His injuries are consistent with someone stomping on him. I’m sure he was booted or something. Someone with blunt force tried to break his spine.”

Sharpe stitched up the puppy’s muzzle, and in a few weeks, he will undergo surgery to repair his fractured bones. Even after repairs, it’s likely the dog will have arthritis, Sharpe said.

Meanwhile, Christopher will find a foster parent for the dog who can administer wound care.

Germain and her friends asked that the puppy be called Chance.

“We were giving him a second chance at life, and he came to us by chance,” Germain said.

GOTGM added Christmas to his name in honor of the day he was rescued.

Since Christopher posted the pup’s plight on Facebook, more than $6,500 in donations have poured in from around the world. She estimates the dog’s treatment and rehabilitation will be upwards of $10,000. Christopher is also overwhelmed with offers to foster and adopt the puppy.

“There is only one Chance Christmas, but a few hundred at shelters that need to be rescued,” Christopher said. “If they are willing to do this, they can do that, and help save more lives because of one little puppy.”

The veterinary center reported the case to the Michigan City Police Department, and Monday animal control supervisor Royce Williams said a “possible person of interest who might be the owner of the dog” has been identified. A detective has been assigned to the case, and although it is still in the early stages of investigation, “the matter will definitely not go unlooked at,” Williams said.

“It’s pretty horrible,” Williams said. “I have three dogs myself and am an animal lover. Nobody wants to see animals put through this.”

Donations for the puppy’s care can be sent to Guardians of the Green Mile (GOTGM}, P.O. Box 182, Portage, IN or the group’s PayPal page, https://www.paypal.me/GOTGM.

Chance Christmas’ progress will be posted on the GOTGM Facebook page and Michigan City police Officer Royce Williams said the Police Department will post updates to the investigation on its Facebook page.

Thousands remained without power Tuesday after Monday's ice storm, and NIPSCO said some may have to wait until Wednesday to have it restored.

Police: Man was within legal rights to shoot dogs

DEMOTTE — Dana Drew said she cannot get the image out of her head of her three dogs' lifeless bodies lying in the back of a pickup truck.

PORTAGE — He’s not going to let two broken hips stand in his way.

MICHIGAN CITY — Charges were filed Monday in connection with a puppy found with its mouth taped shut and two broken hips in Michigan City.

MICHIGAN CITY — A man wanted by LaPorte County authorities for the alleged abuse of a pit bull was arrested late Sunday in El Paso, Texas, aut…

Suspect in dog abuse case heading back to LaPorte County

MICHIGAN CITY — The man charged with injuring a dog found by neighbors on Christmas Day will be returned to LaPorte County after his arrest in Texas.

Two men were arrested Tuesday after police said they helped a friend who was charged with severely injuring a puppy to run from authorities.

PORTAGE — When you celebrate St. Patrick’s Day this year, you can also bring a little luck into the lives of homeless animals.

Of the eight finalists in the American Humane Association's 2015 American Hero Dog contest, Harley is the oldest, smallest and most unlikely o…

Christmas Chance, a 4-month-old pit bull, was discovered Christmas evening in Michigan City with his muzzle bound by electrical tape and both legs broken. He was taken to the North Central Emergency Veterinary Clinic in Westville for treatment.

Michigan City Police are investigating the alleged mistreatment of a 4-month-old pit bull puppy rescued Christmas evening. Someone had taped shut his muzzle and two of his legs are broken.

Chance Christmas, a pit bull puppy, was badly abused in December 2015. He was found Christmas evening with his muzzle taped shut and two broken legs.