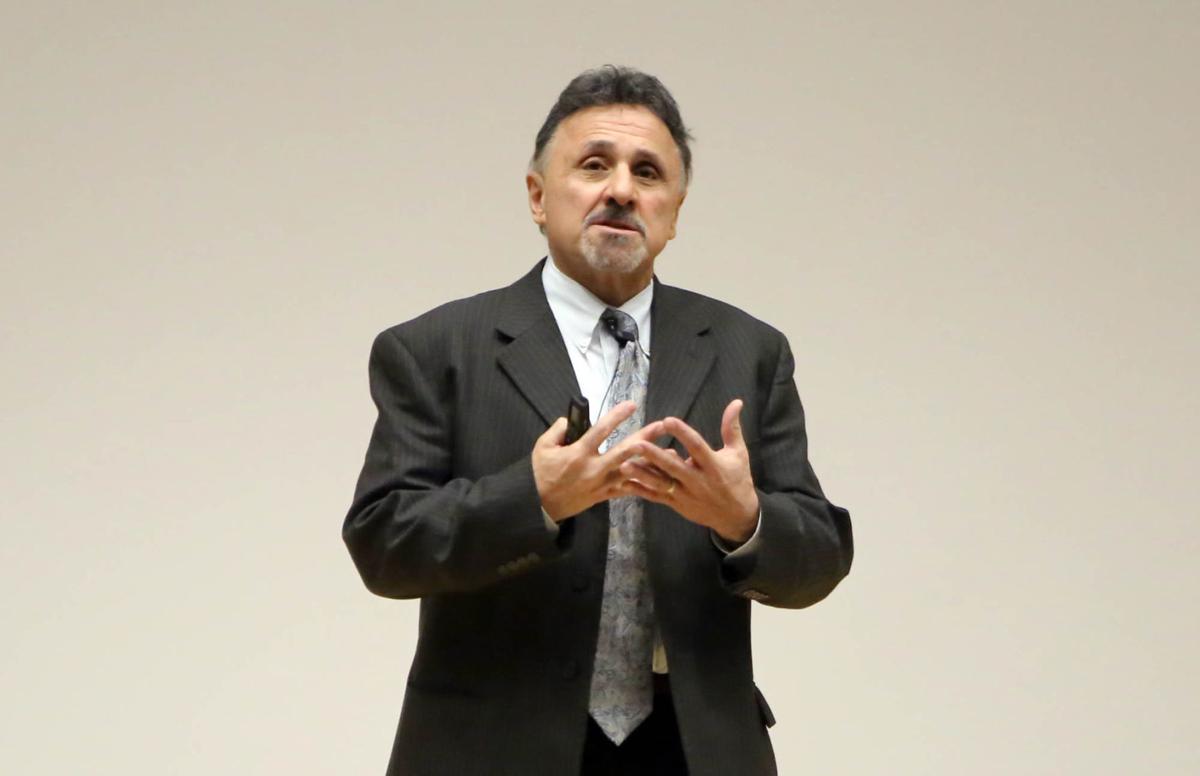 Frank DeAngelis, former principal at Columbine High School in Littleton, Colorado, speaks Monday at Ivy Tech in Valparaiso. DeAngelis spoke of what was learned after the mass shooting at the school on April 20, 1999. 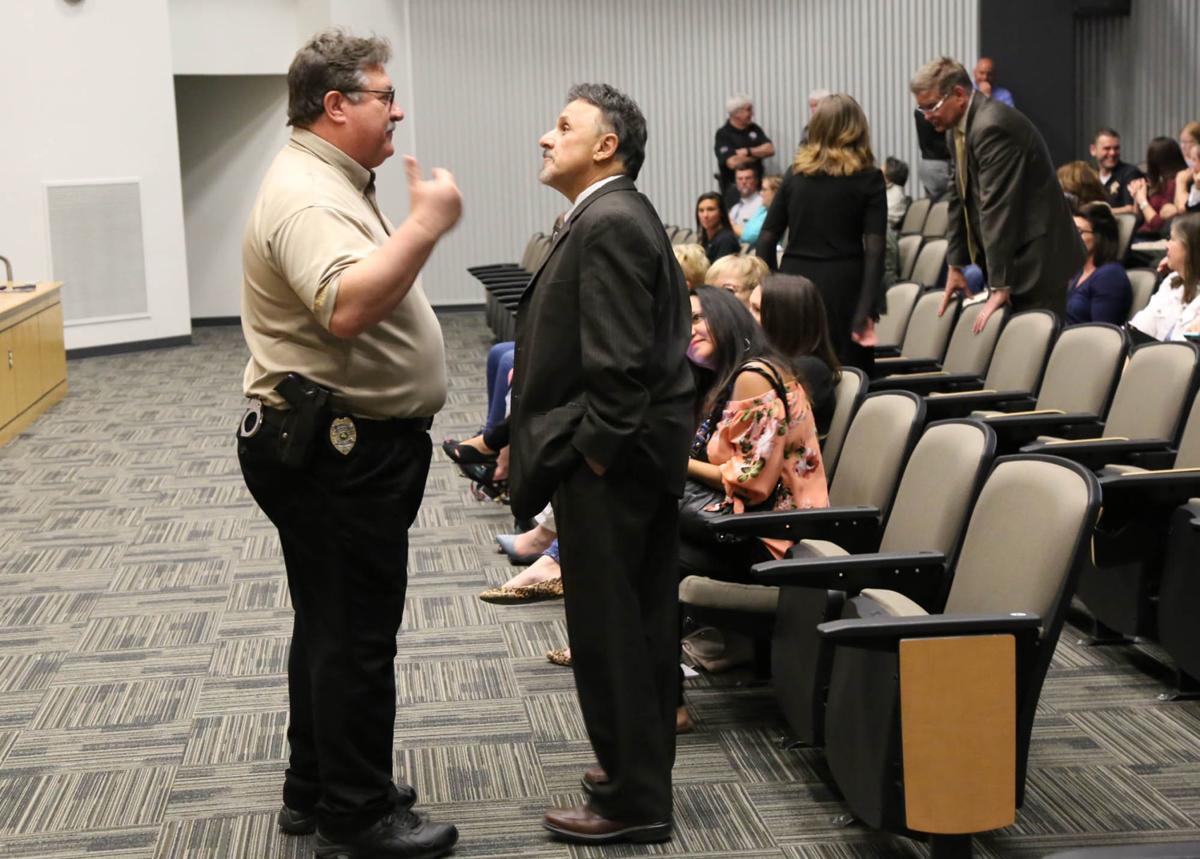 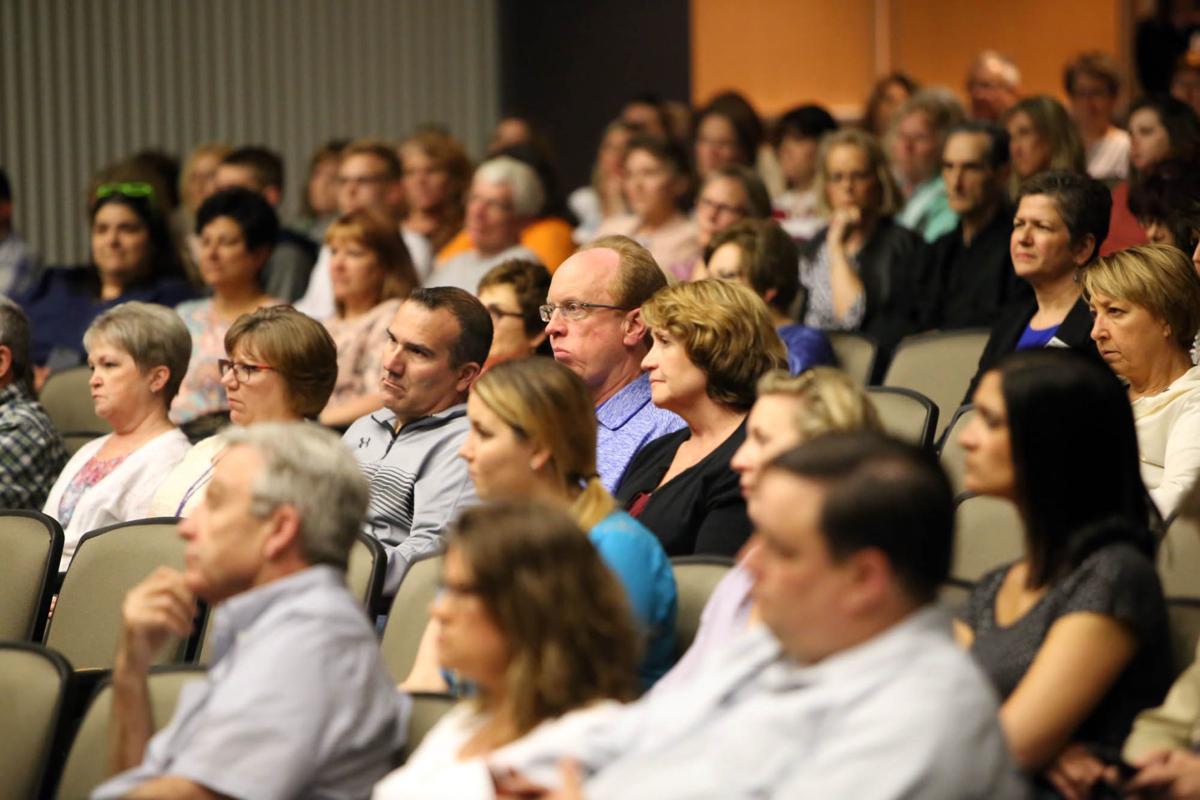 People listen to former Columbine High School principal Frank DeAngelis to speak Monday about his experience during the mass shooting at the school on April 20, 1999, in Littleton Colorado, at Ivy Tech in Valparaiso.

VALPARAISO — On April 20, 1999, Frank DeAngelis was meeting with a young teacher.

His secretary came to his office door at Columbine High School in Littleton, Colorado, and told him what he never thought he'd hear — there's gunfire in the school.

"If you would have asked me 19 years ago at Columbine High School, could a Columbine happen here, I would have said no," he told a group Monday night at Ivy Tech Community College. Phil Chalmers, a crime author, also addressed the group.

DeAngelis spoke to an auditorium full of educators, law enforcement personnel and others in a program sponsored by the Porter County Sheriff's Department and Porter County Safe Schools Commission on that fateful day in Colorado and the aftermath.

"There were 13 killed by two of my students. I asked is there something I missed, something we missed," said DeAngelis, who had been principal at Columbine for three years and continued as principal for another 15.

DeAngelis also said another 26 were injured that day. There were more, however, harmed in the deadly rampage, as he told stories of both a student's suicide and the high rate of substance abuse of former students. Most of the staff stayed until 2002 when those who were freshman during the attack graduated. Then, there was about a 50 percent turnover in staff.

"We didn't know how deeply they were impacted," he said, adding that was one of the lessons learned from Columbine.

DeAngelis said he had to learn to forgive the two killers because he had "so much hatred in his heart" that he couldn't move forward without learning to forgive, which meant going through counseling and leaning on his faith.

He said he also lost his marriage and was estranged from his daughter because he put everything above his family after the tragedy.

DeAngelis also told the group that there was hope as he told of students who were critically ill and spent months in the hospital with traumatic injuries. Those students didn't lose their spirits or determination. One, he said, who they didn't believe would walk again, walked from his wheelchair to get his diploma from DeAngelis.

DeAngelis, who retired three years ago, said he still gets calls from administrators at other schools who have suffered mass shootings, asking how he did it and how the school survived.

The answer to stopping the shootings, he said, is a puzzle.

"Tougher gun laws is just one piece of the puzzle," said DeAngelis, adding that mental health issues, social media and parental involvement are other pieces.

PORTAGE — The City Council this week approved a tax abatement that may lead to 160 to 200 new jobs in the city.

The National Weather Service has issued a severe thunderstorm warning for Lake and Porter counties until 9 p.m.

PORTAGE — Simon Quiroz wants to be the voice of students at Portage High School — all the students.

THE PINES — A local man is facing felony charges of arson and criminal mischief after he allegedly set a garage on fire Saturday morning.

MICHIGAN CITY — Police are investigating a Sunday evening shooting in which a 21-year-old man was wounded.

'What would you do if?': Teachers, school and office workers, others flocking to active shooter trainings

Teachers, school staff, office workers and others have been flocking to recent active shooter survival workshops in the Region.

ST. JOHN — The identification tags Lake Central High School students have been required to carry with them for several years will have an addi…

Frank DeAngelis, former principal at Columbine High School in Littleton, Colorado, speaks Monday at Ivy Tech in Valparaiso. DeAngelis spoke of what was learned after the mass shooting at the school on April 20, 1999.

People listen to former Columbine High School principal Frank DeAngelis to speak Monday about his experience during the mass shooting at the school on April 20, 1999, in Littleton Colorado, at Ivy Tech in Valparaiso.