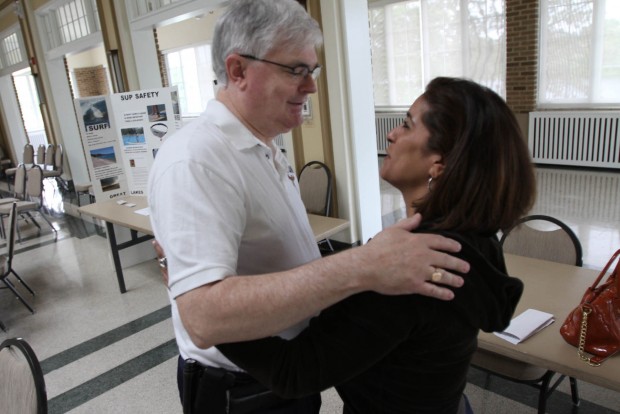 Evelyn Hernandez, of Beverly Shores, greets the Rev. Lowell Black, chaplain for Chesterton Fire Department on Saturday at the Marquette Park Pavilion during a water safety presentation by Hernandez. Hernandez, 43, nearly drowned a year ago. Her boyfriend, Leonel Dominguez, 31, who was visiting from New York did drown. Black waited onshore with Hernandez comforting her while rescuers searched for her boyfriend. 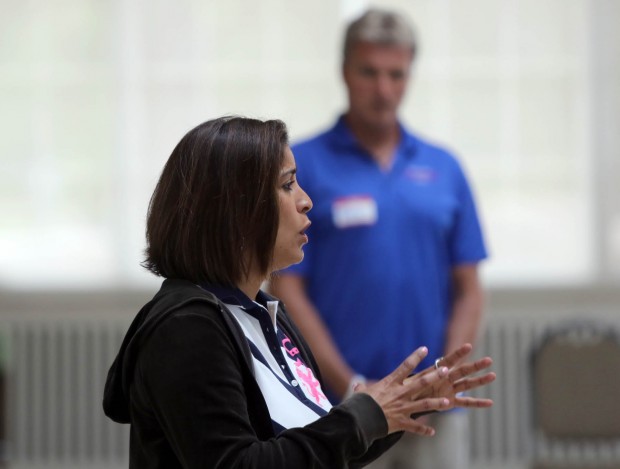 GARY | Evelyn Hernandez said her boyfriend, Leonel Dominguez, made a last-minute decision to buy an inflatable raft before they headed off last summer to a Beverly Shores beach near her home to spend time in the water and watch the sunset.

The decision proved disastrous when the couple, who were good swimmers, were unknowingly blown a quarter mile offshore and wound up separated from the raft in waves and strong winds.

"I had a very personal moment (with God)," Hernandez told a group gathered Saturday at the Marquette Park Pavilion. "I realized I was drowning."

She was rescued by a passerby, but 31-year-old Dominguez, of New York, slipped under the water. His body was not retrieved for six days.

With the one-year anniversary of the tragedy approaching June 18, Hernandez sought out the help of the nonprofit Great Lakes Surf Rescue Project in sponsoring a water safety class in conjunction with the Gary Department of Public Parks.

The class was part of an effort by Hernandez to fuel action among Great Lakes states for water safety.

While a lot of attention is given to rip currents, which pull swimmers away from shore, Pratt said it is an uncommon occurrence on the lake and the terminology is being widened to dangerous currents. A more common phenomenon are currents flowing along the shoreline, he said.

Pratt told Saturday's class that 65 percent of drownings and rescues occur around structures in the water, such as piers, and that the most problems occur during times of moderate conditions with 3- to 4-foot waves.

Hoping to mimic the success of the stop, drop and roll instructions given for fire safety, Pratt said swimmers in distress should remember flip, float and follow. Flip on your back for greater ease in breathing and floating, float to see where the current takes you and follow the safest course to safety, he said.

Pratt encouraged swimmers to know their limits and for parents to both put life jackets on small children and remain near them in the water. He also said contrary to the perception that drowning people wave their arms and yell for help, they actually appear with their heads tilted back at the water's surface while doing a ladder climbing motion below.

Anyone attempting to assist a swimmer in distress should take a flotation device, such as toy or cooler, into the water with them and keep it between them and the other person.

Hernandez was reunited Saturday with the Rev. Lowell Black, a chaplain with the Chesterton Fire Department, who aided her as rescuers searched for her boyfriend.

Before heading out to the beach, download (http://glin.net/beachcast/) a free Android-based application providing real-time information on water quality advisories, weather and water conditions for 1,900 beaches in the Great Lakes region.

Evelyn Hernandez, of Beverly Shores, greets the Rev. Lowell Black, chaplain for Chesterton Fire Department on Saturday at the Marquette Park Pavilion during a water safety presentation by Hernandez. Hernandez, 43, nearly drowned a year ago. Her boyfriend, Leonel Dominguez, 31, who was visiting from New York did drown. Black waited onshore with Hernandez comforting her while rescuers searched for her boyfriend.