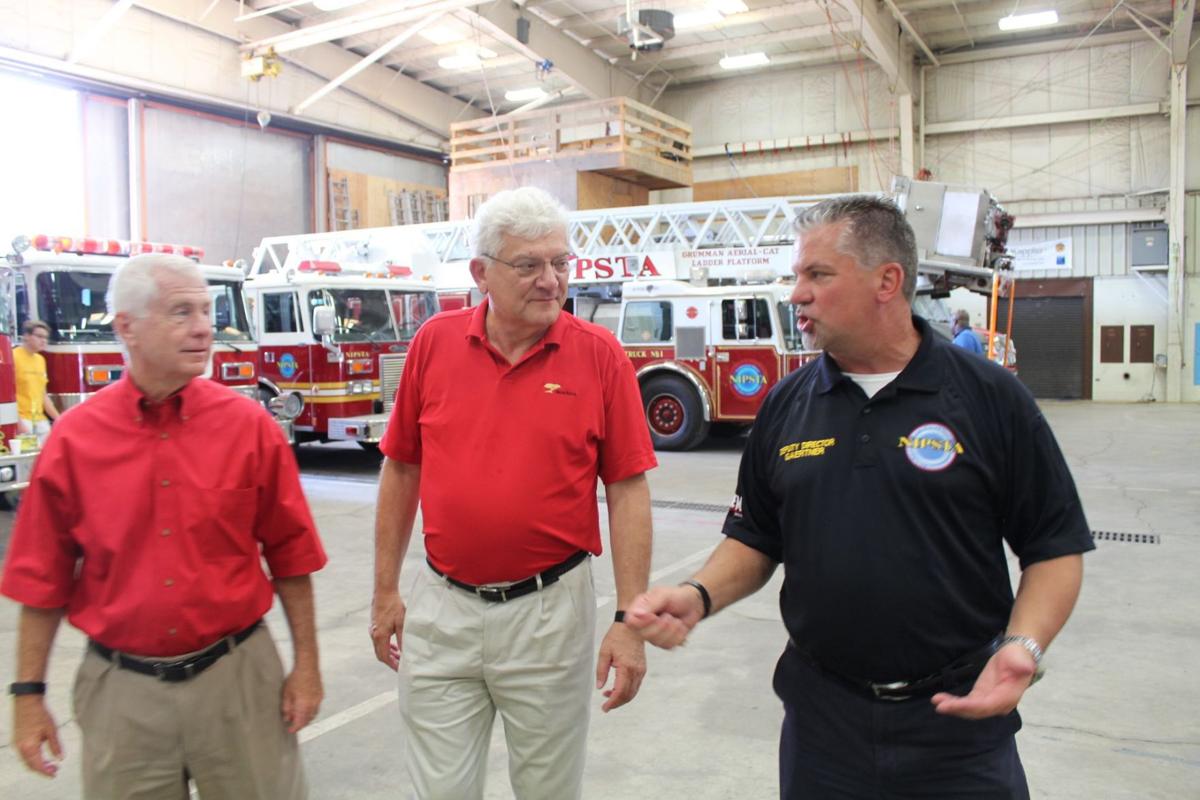 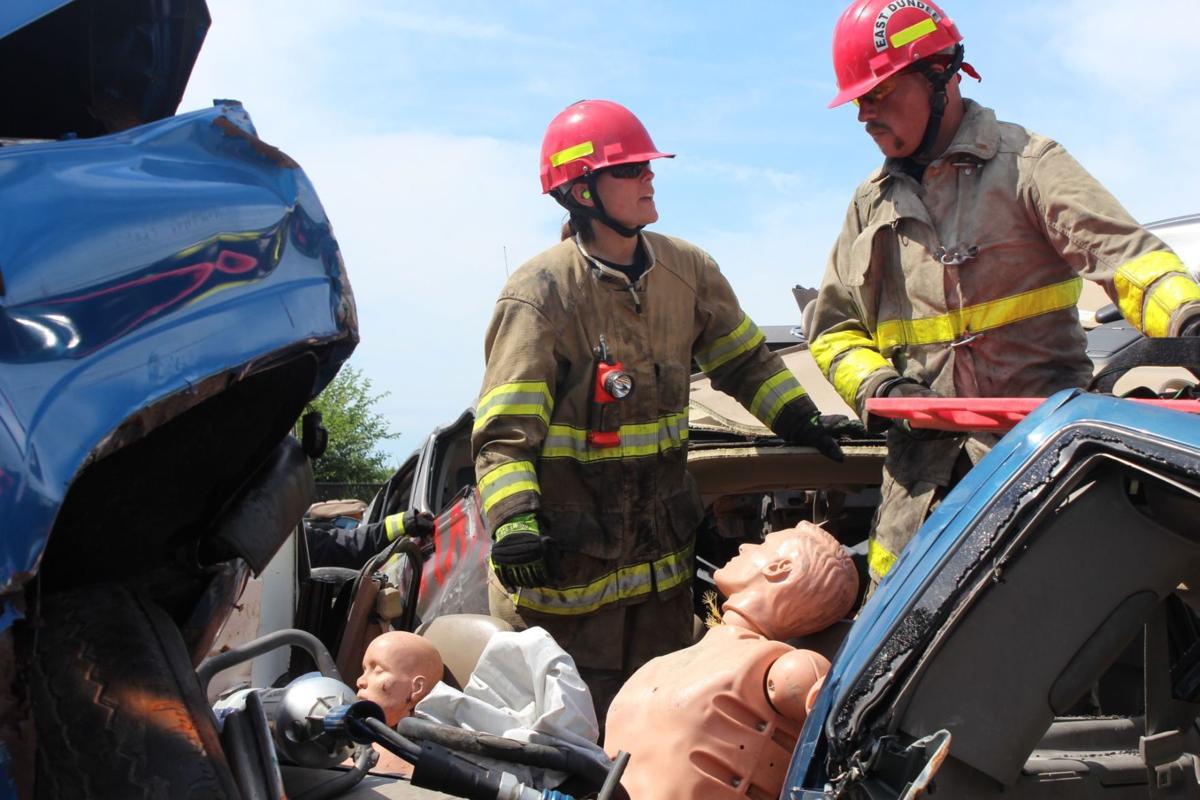 Firefighters train at the Northeastern Illinois Public Safety Training Academy in Glenview, Illinois. A plan is in the works to build a similar academy in Valparaiso.

VALPARAISO — A contingent led by Stewart McMillan, president and CEO of Task Force Tips, that included local legislators and fire officials recently toured the Northeastern Illinois Public Safety Academy in Glenview with hopes of creating a similar facility in Valparaiso.

NIPSTA is a 21-acre multidisciplinary facility created in 2001 at the site of the former Glenview Naval Air Station used to train local first responders.

Through his MAAC Foundation, McMillan plans to open a 4-acre version of the academy near his business in the Montdale Industrial Park on the city’s east side. Although it will consist of just a firefighter training academy, with plans to serve 80 departments and 2,000 firefighters, McMillan wants to eventually add to the campus a law enforcement and EMS component much like the one at NIPSTA.

“It gave me a better understanding of the educational opportunities that are available to fire departments,” Dutz said. “What was even more impactful was the possibility of different public safety agencies coming together to train side by side.”

The tour took the Region group to various props spread out on the grounds including burn towers, railway cars, a center for disease and emergency medicine and a confined space area that mimics Cook County’s sewer system.

They also saw firefighters do live training in a 32,000-square-foot military aircraft hangar that now accommodates a wide range of scenario-based training exercises.

One of the instructors at the academy called the site “a Disneyland for firefighters.”

One highlight on the tour was watching firefighters from East Dundee, Illinois, perform extraction training at a makeshift multiple vehicle crash site.

“We train until we can’t get it wrong,” said Dan Shilney, NIPSTA safety officer. “And the only way to do that is (to) set up real live situations like this. You have to have a facility to do this. You can’t get in neighborhoods to do it.”

Shilney said the academy also allows multiple fire departments to train at the same time, departments that may show up on call together.

“When they get to a big incident, they start to fall in,” he said. “They learned the exact same thing as the department five miles away or maybe 20 miles away. All have the same training.”

McMillan’s foundation is currently drawing up plans for the Valparaiso-based academy, which would be located in the same area as Task Force Tips and AMKUS Rescue Systems, which moved its production to Montdale in June after being purchased by Task Force Tips.

Charbonneau, while saying funding is “certainly going to be an issue,” said he is excited about the project.

“We’re blessed to have someone like Stewart McMillan leading the charge,” he said.

Soliday said they’re looking at a number of opportunities to help with some funding.

“It’s an excellent project,” he said. “Ed (Charbonneau) and I have a lot of people come in and say they have an idea, but Stewart puts the resources behind his ideas. I look forward to seeing what it could be.”

Officials at the Northeastern Illinois Public Safety Academy plan to share their safety policies and other advice with the project leaders behind the planned Valparaiso-based fire academy.

NIPSTA Deputy Director Thomas Gaertner told the Region contingent planning their own academy to have an administrative backbone in place from the beginning.

"NIPSTA didn't do that," he said. "We're still putting policies in place. There were no safety policies. We're playing catch-up with a lot of that so it's extremely difficult."

NIPSTA Executive Director Jill Benson Ramaker said it's important to create a financial plan for the academy that looks ahead to five to 10 years.

"And being able to provide the business acumen to that," she said. "It's more financially complex than you anticipate it being."

Gaertner said it can be rough to get an academy going.

"The way the world is going today, I don't think you can get enough of regional-type training and having a place to do that," he said. "The best thing is to be patient. It's taken a long time to get where we are today."

The foundation plans to develop a state-of-the-art campus that will serve as a leading provider of safety, emergency preparedness and response training.

CROWN POINT — The Fire and Rescue Department received new CPR training equipment thanks to a $6,000 grant from NIPSCO.

Law enforcement and EMS component will be added to academy

Celina Weatherwax, project lead for the proposed Valparaiso-based fire academy, said the long-term plan is to include police and EMS training.

The firefighter training academy planned for Valparaiso is a welcome development.

Firefighter training academy could be built in Valpo

VALPARAISO — A firefighter training academy that would serve 2,000 firefighters in five counties is being planned for the city's Montdale Indu…

AMKUS Rescue Systems has begun manufacturing its rescue tools in Indiana, after being bought earlier this year by Task Force Tips and moving p…

Firefighters train at the Northeastern Illinois Public Safety Training Academy in Glenview, Illinois. A plan is in the works to build a similar academy in Valparaiso.