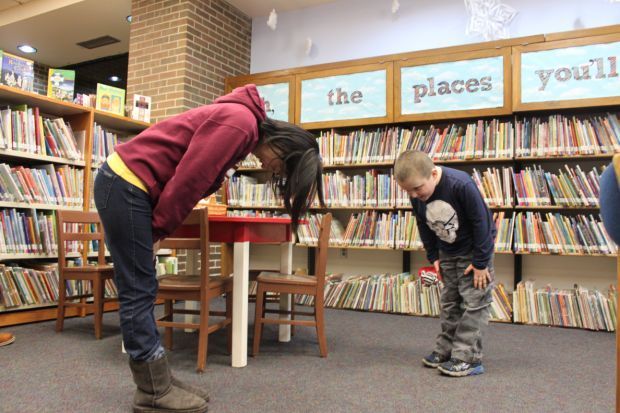 Akiko Tsugawa, Japanese instructor at Chesterton Middle School and Chesterton High School, shows 6-year-old Max Claussen, of Valparaiso, how to greet one another in Japan during Friday night's Mind Your Manners! program at the Westchester Public Library.

Brothers Max Claussen, 6, left, and Stephen Claussen, 7, both of Valparaiso, learn to greet each other and say "hola" as part of Friday night's Mind Your Manners! program at the Westchester Public Library.

CHESTERTON | Candies and treats from Germany, France, Mexico and Japan appeared on the center of individual tables in the children’s area at the Westchester Public Library on Friday night as kids practiced saying please and thank you in each language.

The “Mind Your Manners!” program was the idea of Karyn Witt, library clerk, who has brought in local foreign language speakers to share culture and a few words with area children for the past three years, but Witt says this year is the first year with a manners theme.

“I think a lot of kids have lost or don’t know about manners so I thought it might be nice to compare and contrast manners from other countries. I wanted to get younger kids hooked earlier so they will want to take foreign languages when they get older,” Witt said.

She began by asking the dozen children aged 6 through 12 how they would greet a stranger in France, Mexico, Germany and Japan, and each attempted their greeting.

“You would say ‘hola’ and you would touch cheeks and make a kiss sound,” said Kris Livovich of Chesterton, who grew up in Mexico.

Kathrin Rhinehart, from Osnabrück, Germany, moved to the area one year ago and she shared her knowledge with the curious children.

“Germans love to shake hands, a really firm handshake like that, they love it. Good job!” she told 6-year-old Max Claussen of Valparaiso.

Rhinehart said that she hoped to share a little about her culture, and she brought cookies and books from her native country.

“Our manners in Germany aren’t very different from yours, but maybe I can teach you a couple of words, like bitte, danke, and guten appetit,” she said.

Jordan Nelson, French teacher at Chesterton Middle School and Chesterton High School, said he wanted to participate in the program to work with a younger group.

“I did this program last year and it was a lot of fun working with the younger kids. They are very inquisitive and they know more than I thought they would,” Nelson said.

He shared a greeting with 8-year-old Jackson Nidiffer of Chesterton.

“Bonjour! Did you see how many times we shook hands? Two times. And if you greet a person you know well, we do what is called ‘la bise.’ We touch cheeks and kiss on each side. How do we say thank you? Merci! How do we say please? S’il vous plait!” Nelson said.

Akiko Tsugawa, Japanese instructor at Chesterton Middle School and Chesterton High School, showed the children how to greet one another in Japan.

“We don’t shake hands, we don’t hug. We put our hands to our side and then bow. Do you know what business cards are, with your name and phone number? We exchange those and shake hands, that’s very official,” she said.

Tsugawa amazed Claussen and his 7-year-old brother Stephen Claussen with a revelation about Japanese culture.

“You play video games? You know Mario and Pokemon? Well those are Japanese!” she said as the brothers gasped in amazement.

VALPARAISO — City Council members offered their advice to the Valparaiso School Board while acknowledging the school board’s autonomy.

When Lee Lane saw the aircraft Sen. Tammy Duckworth flew in when she was shot down, it was horrifying.

The Aviation Flight course is the result of a Valparaiso Redevelopment Challenge Grant of around $400,000 and a taxpayer-approved boost to the school district’s property tax revenue.

Akiko Tsugawa, Japanese instructor at Chesterton Middle School and Chesterton High School, shows 6-year-old Max Claussen, of Valparaiso, how to greet one another in Japan during Friday night's Mind Your Manners! program at the Westchester Public Library.

Brothers Max Claussen, 6, left, and Stephen Claussen, 7, both of Valparaiso, learn to greet each other and say "hola" as part of Friday night's Mind Your Manners! program at the Westchester Public Library.