Region man ID'd in fatal crash was struck by semi as he rode a bike, police say 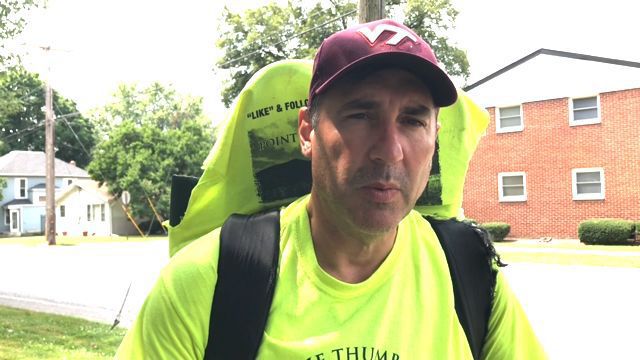 James Smith, 50, of Manchester, Pennsylvania, says he is on a cross-country journey to promote personal responsibility, optimism and civility. Here, he walks on Roosevelt Street in Valparaiso on Tuesday. 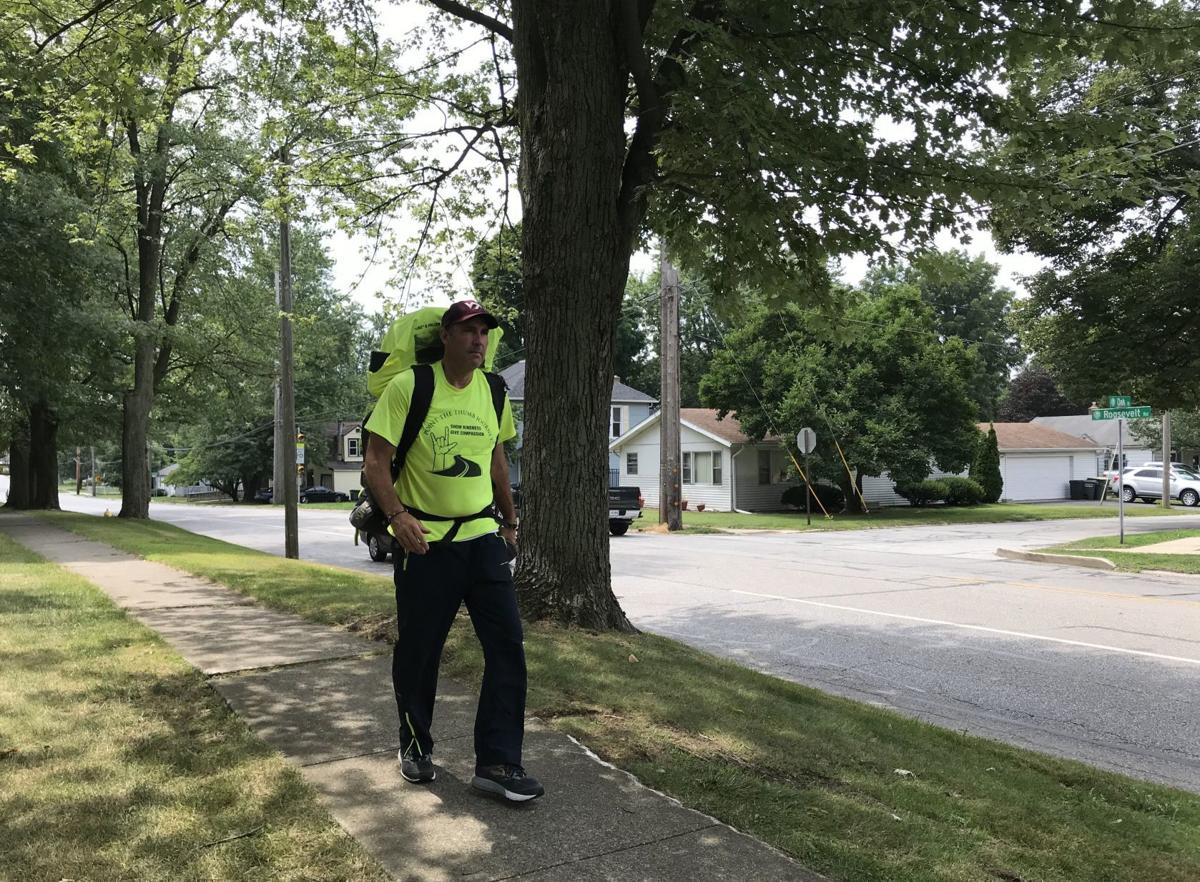 James Smith, 50, of Manchester, Pennsylvania, says he is walking across the country looking for civility in society. Here, he walks Tuesday on Roosevelt Street in Valparaiso.

VALPARAISO — James Smith is using his thumb as well as his feet on his cross-country journey west from his home in Manchester, Pennsylvania.

Pointing his thumb toward his chest, Smith said people should think before reacting to situations.

“All we do is point and yell, 'Fire!' and we don’t do anything to stop the fire,” Smith said. “Point the thumb at yourself first.”

Smith, 50, is blogging about the journey at www.pttjourney.com and writing a book he hopes to publish at the end of the journey.

Smith’s journey began with a jarring comment from his 11-year-old daughter, who got off the school bus in February and said, “Dad, you’re right. People do suck.”

That began some self-examination. Smith said he’s on this journey for his kids and himself.

Smith told of being frustrated when he was a distribution center manager and asked his bosses for $200 for an appreciation lunch for his employees who worked 12 to 16 hours a day for weeks to get the job done. Smith planned to cook the meal himself.

His bosses rejected his request. Smith spent the money out of his own pocket instead.

“When is enough enough?”

So, like Diogenes’ legendary search for an honest man, Smith is in search of good people who will restore faith in humanity. He’s met a number of them along the way in his journey of 660 miles, as of noon Tuesday.

That’s about 22 miles a day since he left home July 9.

“I’ve met so many amazing people,” he said.

“I don’t want to seem ignorant or rude,” he said, but his shoulders are already straining under the weight of his backpack.

“I’ve been kind of jettisoning things as I go,” he said.

Smith began preparing for the trek by first walking six miles a day, then 15, without a pack. Once he felt comfortable walking 15 miles a day, he knew he could go the distance.

He consulted a podiatrist, who helped him choose the right type of tennis shoe to wear. “It’s like walking on air,” Smith said.

He had to buy a new pair a few days ago.

His doctor checked him out and helped Smith assemble a kit with vitamins, antibiotics in case he needs them and other health aids. That’s about 3 pounds of weight Smith carries that he hopes he won’t need.

“I have some blisters, but nothing I can’t tolerate,” he said.

Other important items in his 30-pound backpack include changes of clothing. He tries to bathe once or twice a day, he said. The backpack, also soaked in sweat, isn’t as fortunate.

He also carries his cellphone and a battery pack good for about five charges per day. When he stops, he plugs in.

He misses his children, he said, but talks to them several times a day.

Smith tries to stop often to meet people, hear their stories, and spread his “point the thumb” message.

“Somehow my message is resonating with folks,” he said. “You’re planting seeds.”

Smith doesn’t have a planned itinerary, nor any set schedule to keep.

“The journey is about the folks I meet and the stories they tell,” he said.

He’s seeking out diversity — Republicans and Democrats, rich and poor, young and old, religious and not.

“I never imagined I’d be connecting with so many alpha males,” Smith said, but they’ve been welcoming to him.

Smith is relying on the kindness of strangers to help him along the way, including providing him shelter.

He’s bracing for bad weather. Light rain can be dealt with using a poncho, and he’s ducked under an awning or inside a business during worse storms. But the big empty areas in the Great Plains, with few places to stop, have him concerned.

So do the Rocky Mountains, which he’ll have to cross on his way to San Francisco.

The end of the journey

Even if he doesn’t make it to the Pacific Ocean, he’ll consider the journey a success, he said.

He’s hoping he’ll get a free ride home from an airline eager for publicity, he said, but others have offered to help him get home.

“The reality is I’m not walking home,” he said.

Whether he has a home to return to remains to be seen. While he’s walking, he has no income. That means he’s risking the loss of his home and car.

Once he gets back to central Pennsylvania, he’ll have to look for a new job.

Until then, “I’m just walking and meeting people.”

A 39-year-old motorcyclist died after striking a guardrail late Saturday on U.S. 20.

The city’s first Fourth of July parade in decades was “short and sweet,” spectators said.

James Smith, 50, of Manchester, Pennsylvania, says he is on a cross-country journey to promote personal responsibility, optimism and civility. Here, he walks on Roosevelt Street in Valparaiso on Tuesday.

James Smith, 50, of Manchester, Pennsylvania, says he is walking across the country looking for civility in society. Here, he walks Tuesday on Roosevelt Street in Valparaiso.