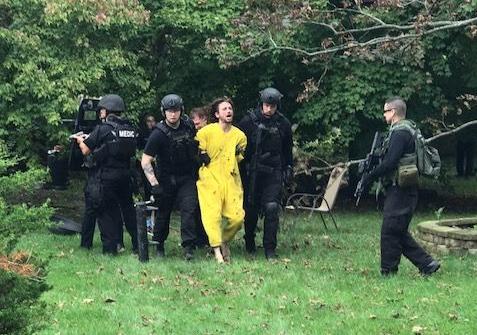 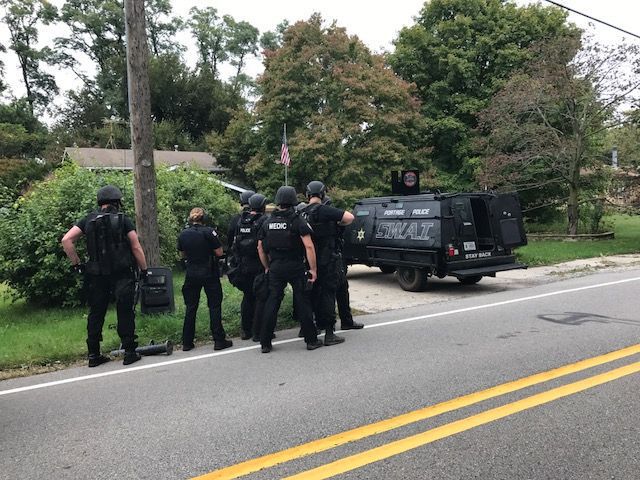 The Portage Police Department SWAT team was deployed to the 5500 block of Evergreen Avenue Thursday afternoon to serve an arrest warrant. The incident resulted in the arrest of Ryan S. Crum, 24.

PORTAGE — A 24-year-old man was arrested Thursday afternoon following a brief standoff at his home.

Ryan S. Crum, of the 5500 block of Evergreen Avenue, was wanted on Porter County charges of battery to law enforcement, resisting arrest, criminal confinement, intimidation and disorderly conduct when police arrived at his home about 1 p.m. Thursday to serve a warrant.

A negotiator made several attempts to reach Crum by telephone to get him to peacefully surrender, Police Chief Troy Williams said.

When there was no response, a police negotiator attempted to reach Crum using a loud speaker without success, Williams said, adding that a large dog was released from the home at the same time.

A SWAT team member behind the home spotted Crum run from the house and hide under some tarps and junk wood in the back yard. The SWAT team positioned themselves outside the fence to the backyard and again attempted to contact Crum without success, Williams said.

A flash bang was used as a distraction technique prior to entering the backyard. The SWAT team then entered the backyard and began removing the tarps and wood to discover a disabled vehicle with Crum hiding inside. Crum refused to come out, and his active resistance led to him being shot with a bean bag round, Williams said.

Crum continued to fight with officers, but was ultimately subdued and placed into handcuffs, according to police. A large knife was found next to where Crum was in the back seat.

While he was checked for injuries, he continued to yell and scream and refused to get into the police car, Williams said. Crum was eventually transported to the hospital to get medically cleared. While there he again allegedly attempted to fight with officers.

Once released, he was transported to the Porter County Jail, where he faces additional charges of resisting arrest and disorderly conduct.

PORTAGE — A Portage man was arrested early Sunday morning after he allegedly punched a police dog as officers attempted to gain control of him.

The Portage Police Department SWAT team was deployed to the 5500 block of Evergreen Avenue Thursday afternoon to serve an arrest warrant. The incident resulted in the arrest of Ryan S. Crum, 24.