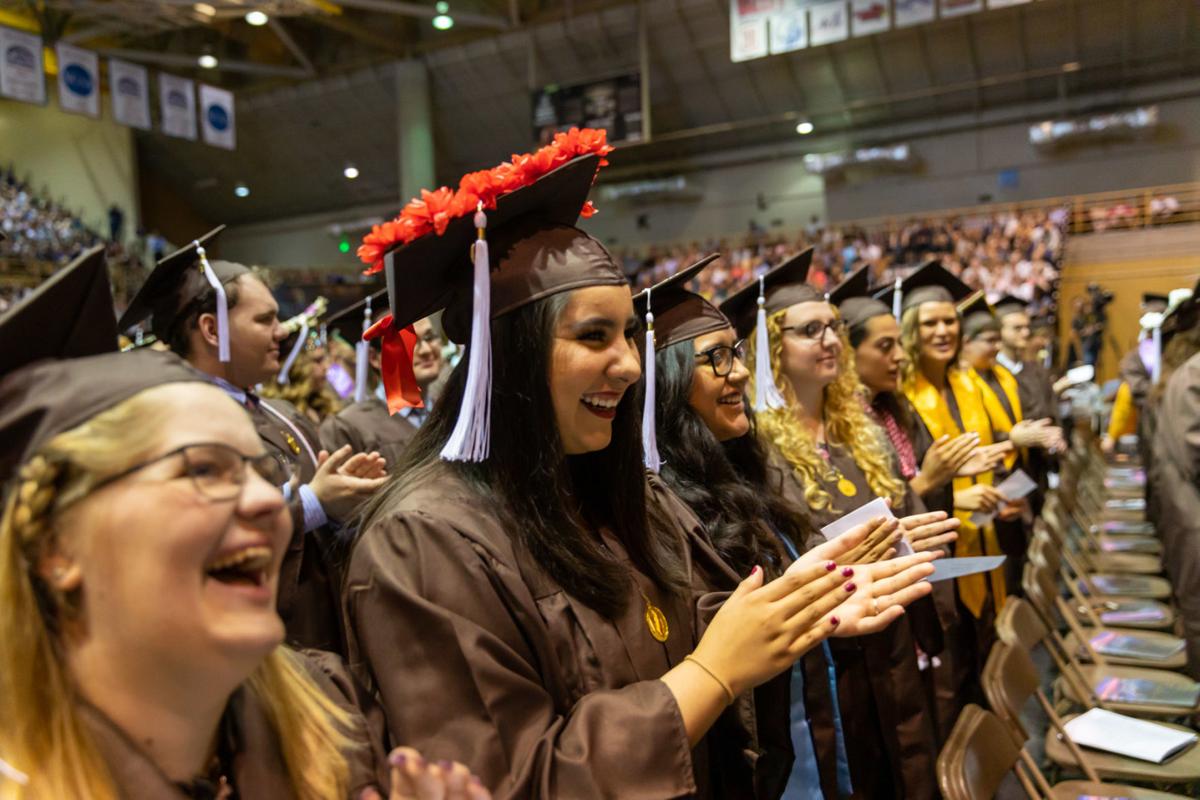 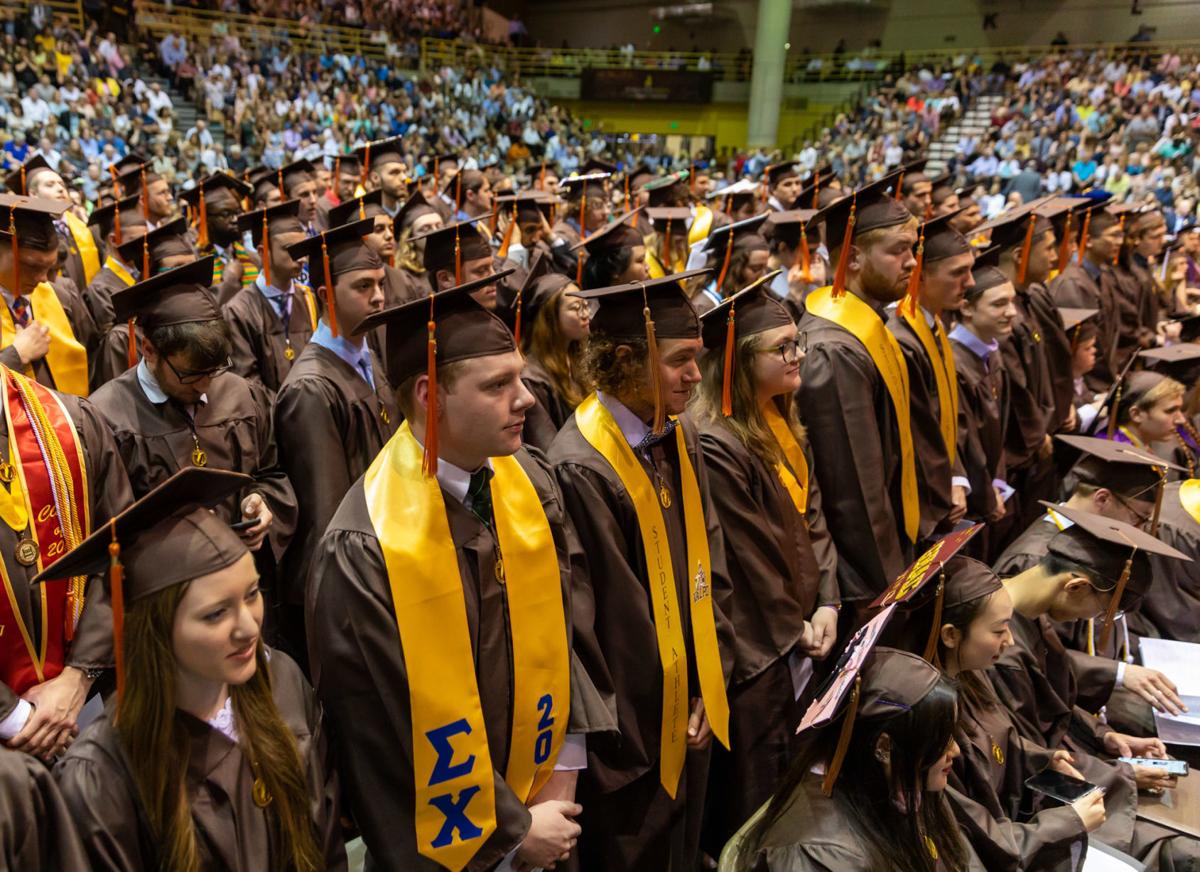 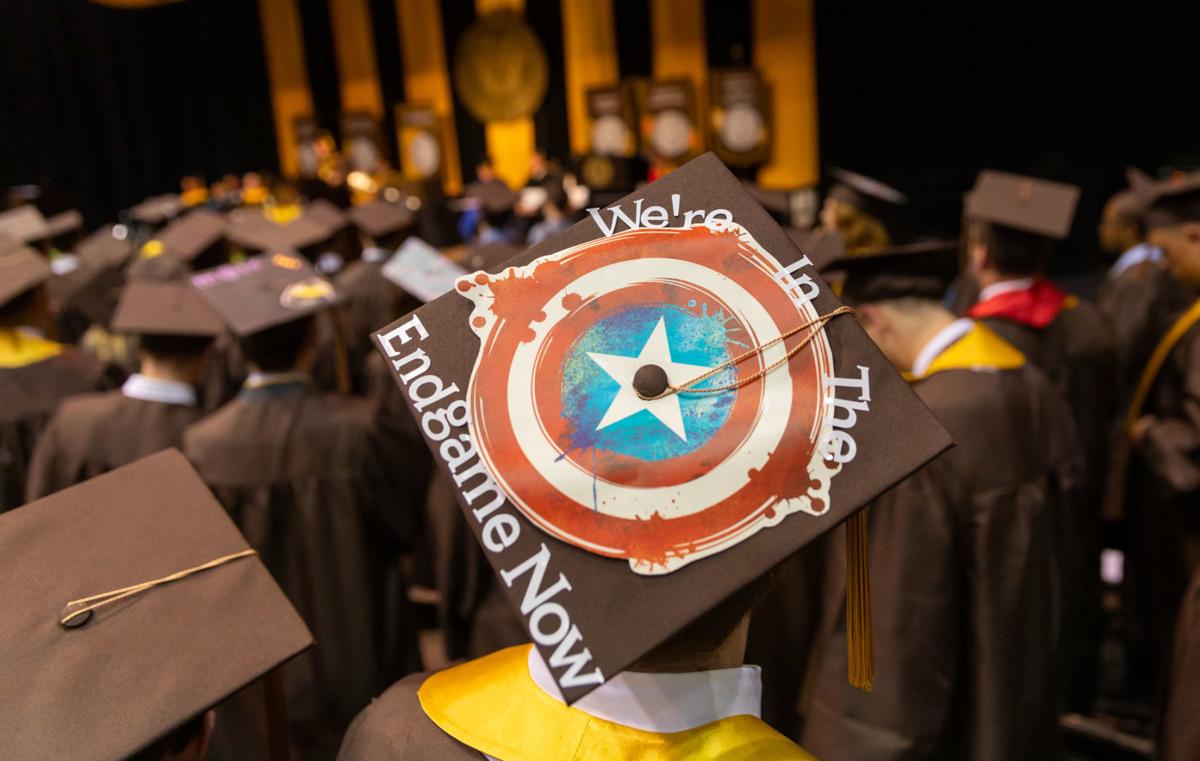 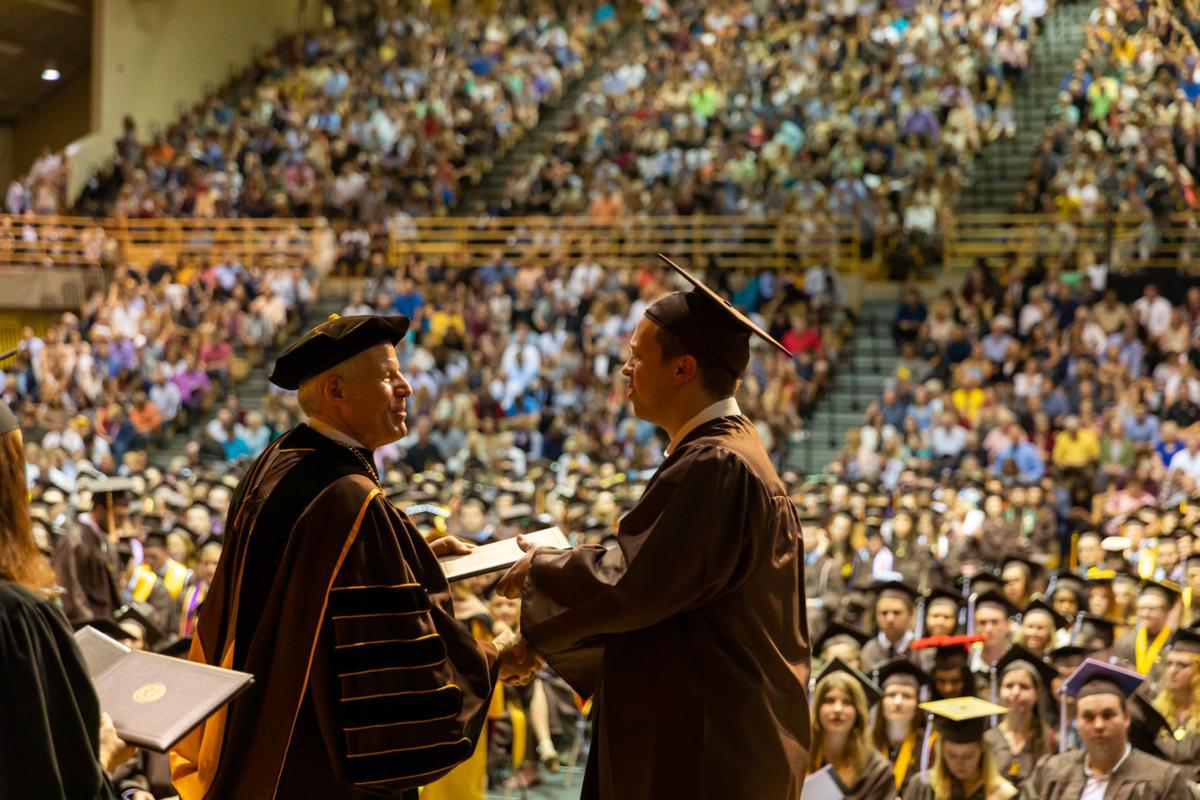 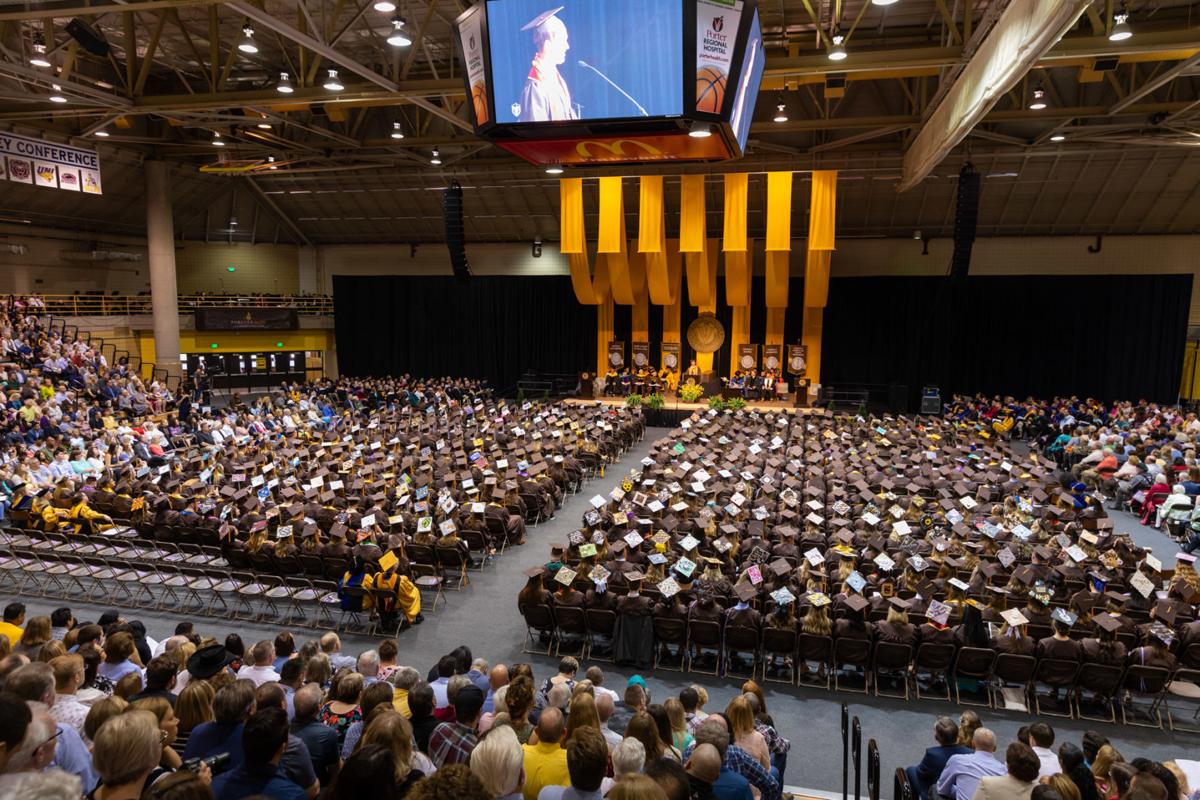 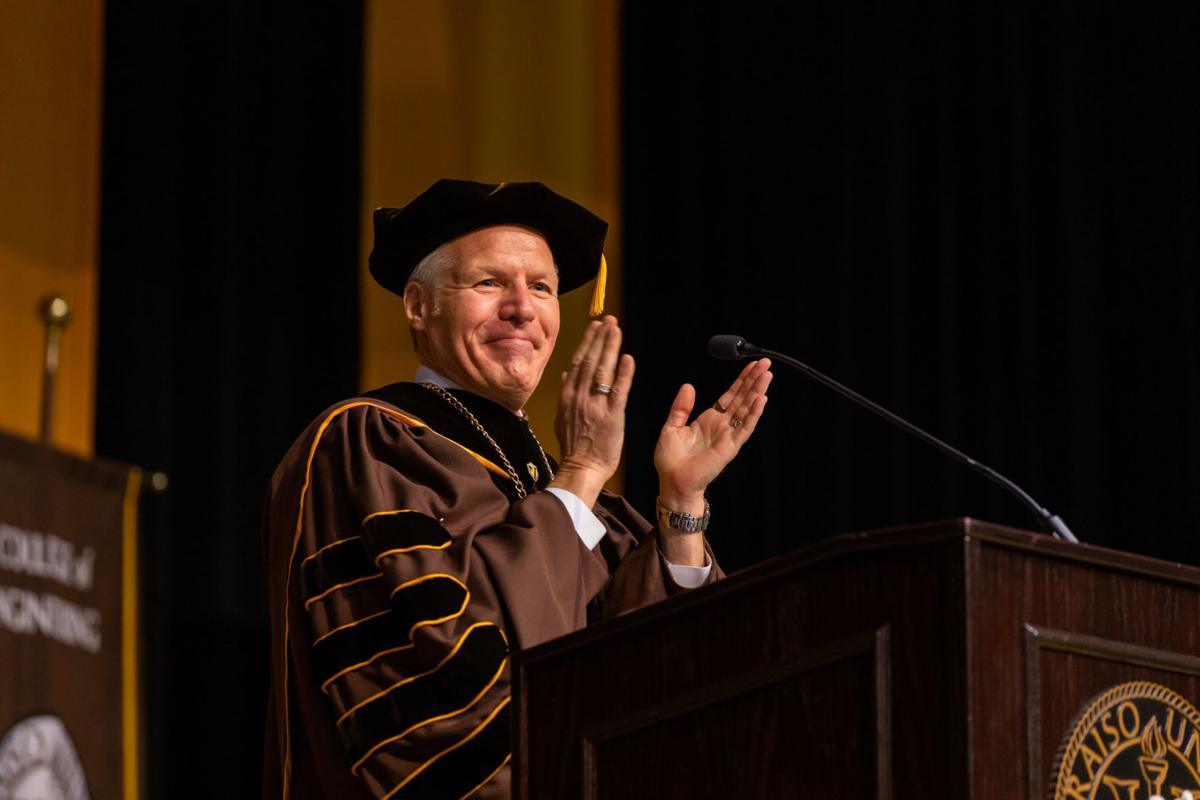 VALPARAISO - Coming from a country where opportunities are limited for women, earning a degree at Valparaiso University meant a lot for Sara Haddadin.

Haddadin wore a hatta, a native headpiece, on her shoulders over her graduation gown.

A general communication major, Haddadin said, “I have a lot of relatives coming from Jordan. I want to show other women there are opportunities for them, that they can overcome limitations.”

Haddadin advises Jordanian women “not to be scared to go outside the box and be open to all options and opportunities. Be comfortable in your own skin and don’t be afraid.”

For Abdullah Alghaith, a management major from Saudi Arabia, commencement “means a lot. It means I’m living my dream.”

Alghaith hopes to pursue a master’s degree in business administration.

Ashley Millette, who earned degrees in secondary education and English, has an interview scheduled for a local teaching job.

As the St. John woman said, graduation means “I’m about to do what I wanted since I was in first grade and be an English teacher. Hopefully I’ll spark a love of English in boys and girls in my classroom.”

Gazing upon the VU Athletics-Recreation Center floor filled with graduates, President Mark Heckler called it a day to “celebrate the light that shines in each of you.”

In his commencement address, Bradley L. Hewitt offered graduates three pieces of advice: be hopeful about the future, listen for God’s prompting in their life journeys and choose the ethics of sacrifice and love.

“Power is useful,” said Hewitt, who recently retired as CEO of Thrivent Financial, “but authority and power will not catch people’s hearts and minds.”

Senior class representative Jacob Harrison, a computer engineering major from Dixon, Ill., called upon his classmates to have a sense of purpose, be passionate, bold, and courageous, and “build relationships with amazing people.”

Also, Harrison said, “Never count yourself out of anything.”

Chidimma Umezinwa, a nursing major from South Milwaukee, Wis., said graduation is “like a milestone I’ve overcome, another change in my life.”

For Eric Rentschler, a computer engineering major from Highland, leaving college means an end to organized sports. A starting left guard on the VU football team, Rentchler is headed for a job with Raytheon in Indianapolis.

“It’ll be interesting not to be playing athletics,” he said.

A graduate who chose to decorate her mortarboard, Lauren Kovacic, posted this message: “It always seems impossible until it’s done.”

“College was pretty tough, but I made it through,” said the Griffith resident and health science major, who will pursue a physician assistant degree at VU.

To those entering college, Kovacic said, “Find your passion and follow it.”