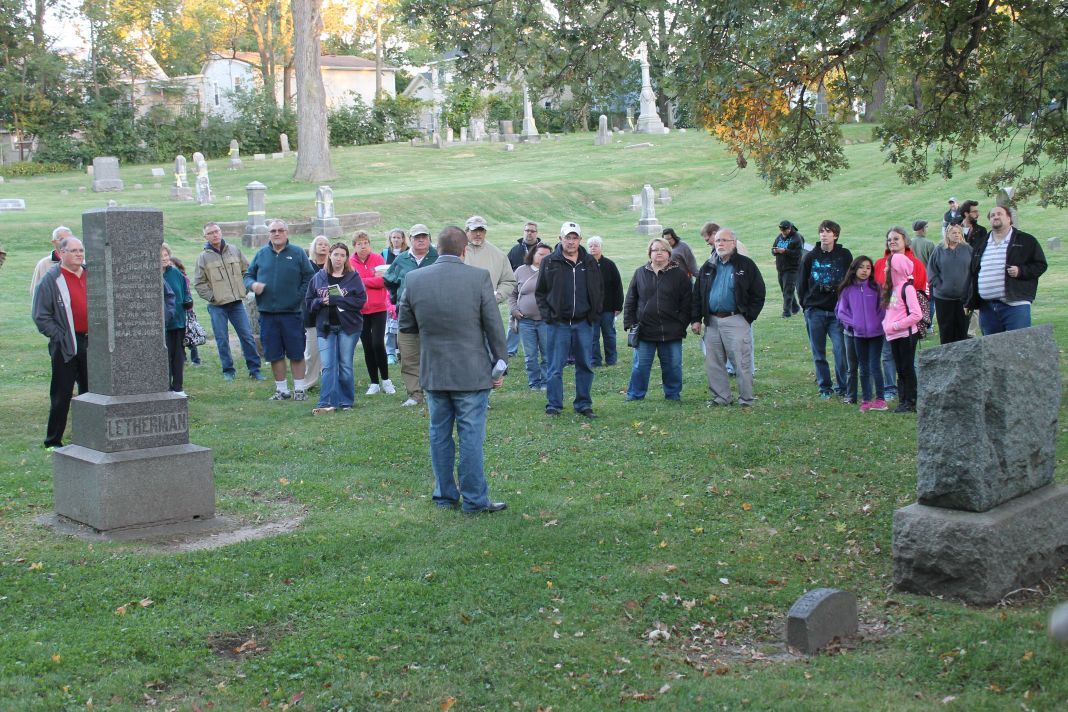 About 50 people learned the history of Union Cemetery Street at a tour provided by the Porter County Museum Thursday. 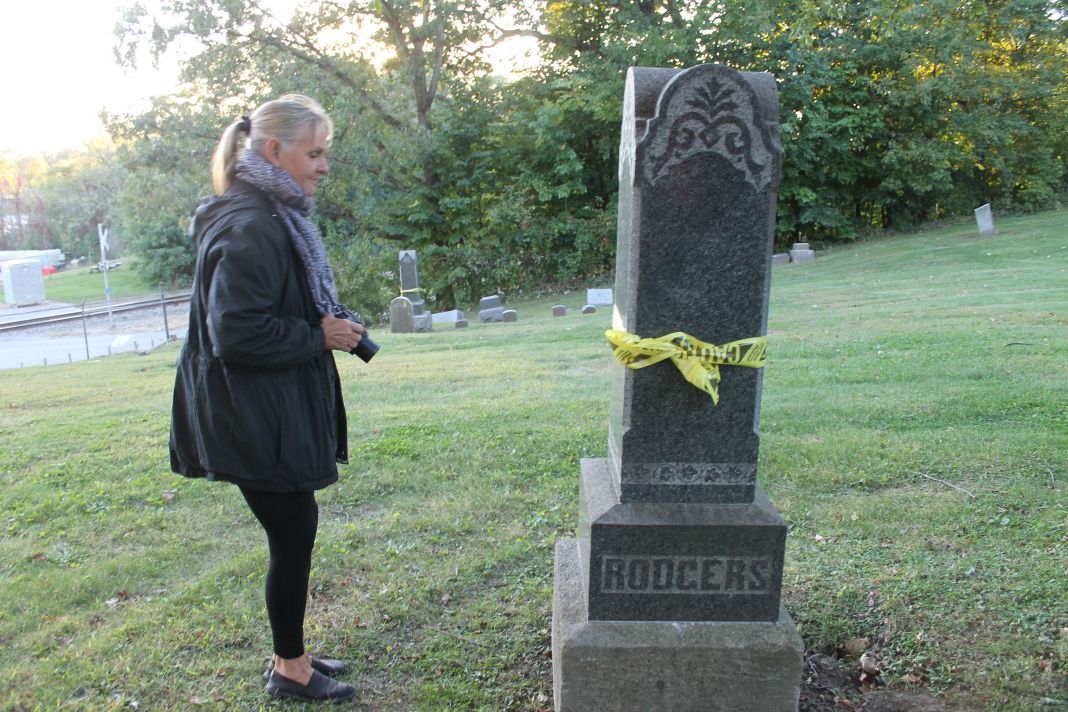 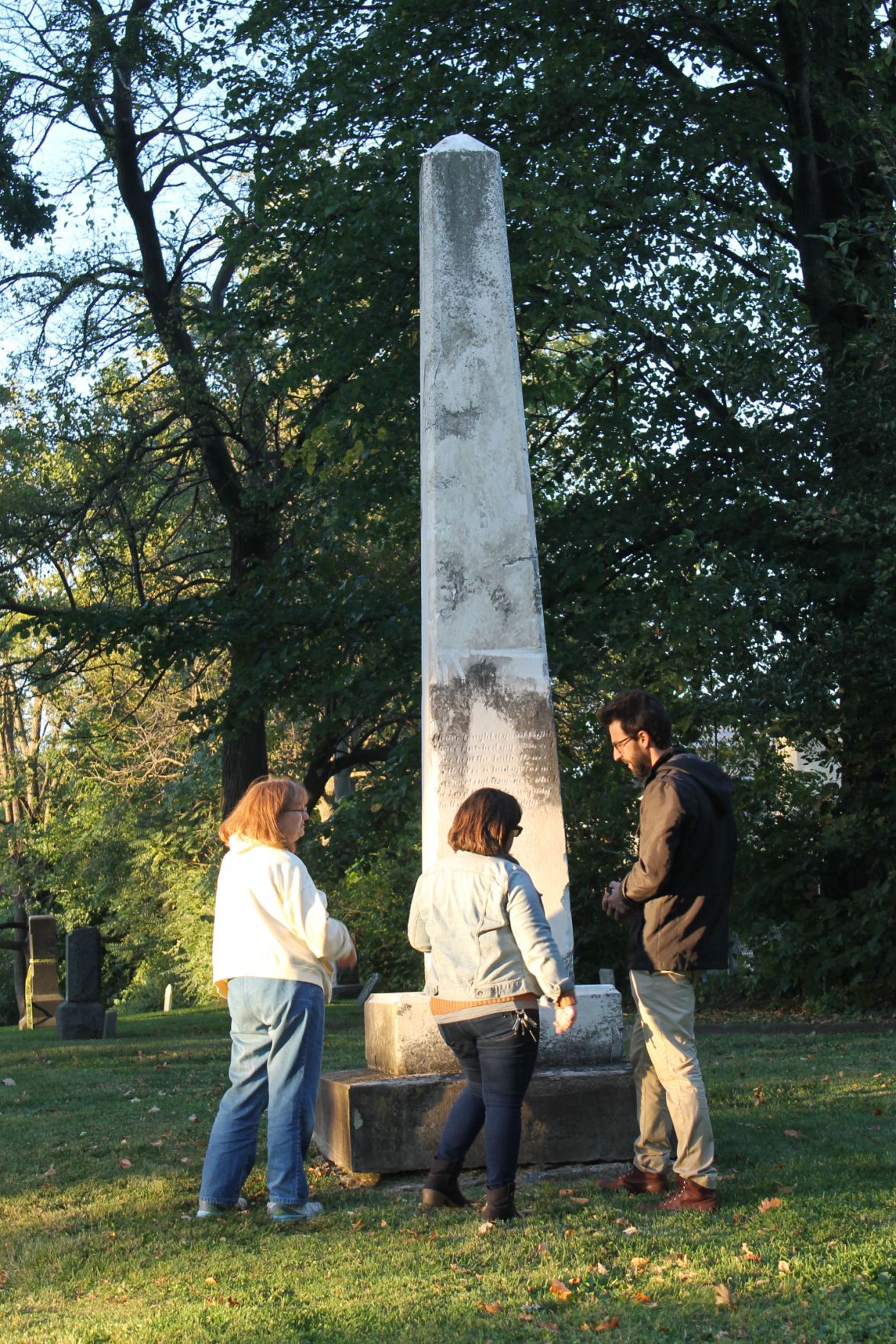 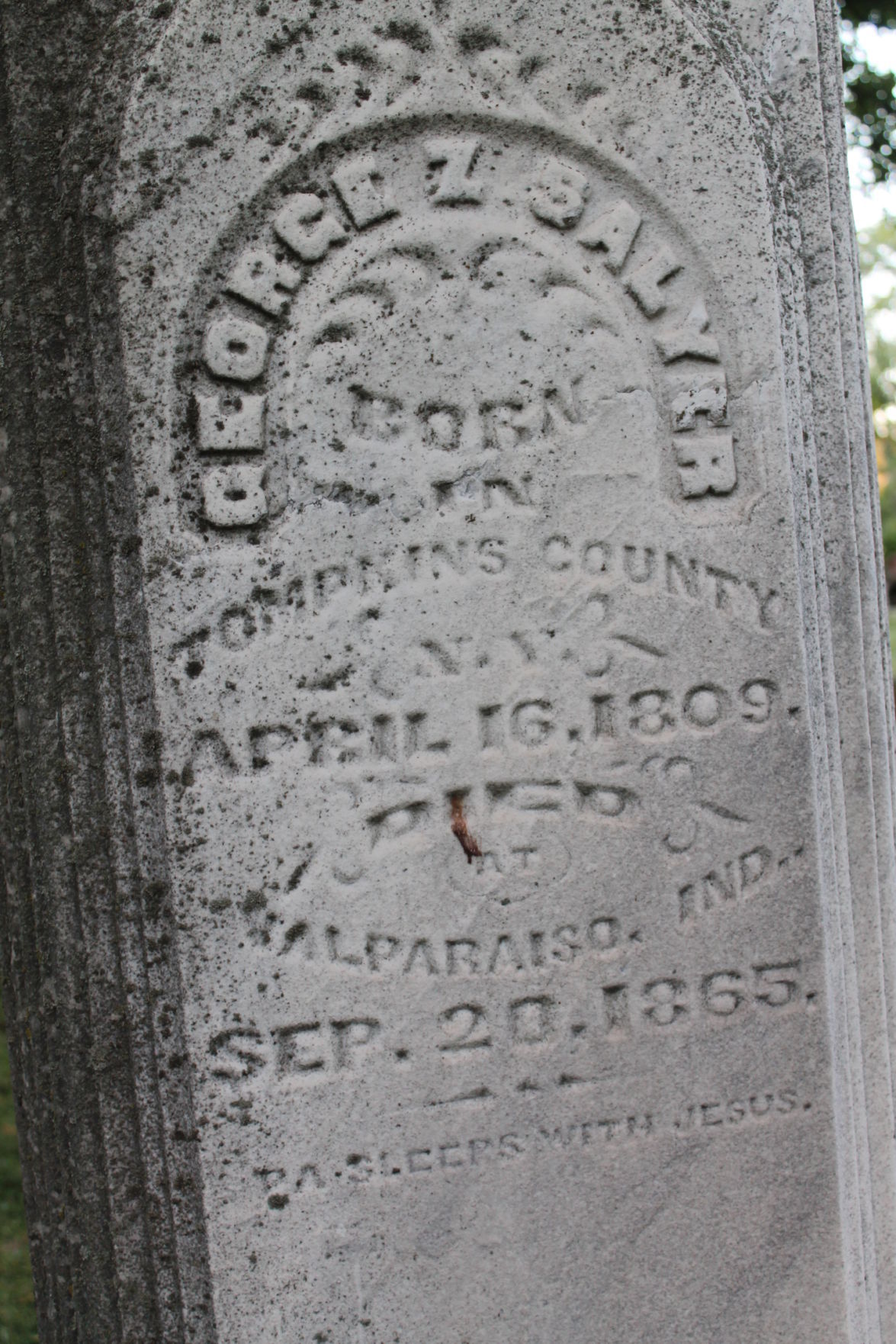 The grave marker for George Salyer contains the inscription "Pa sleeps in Jesus." 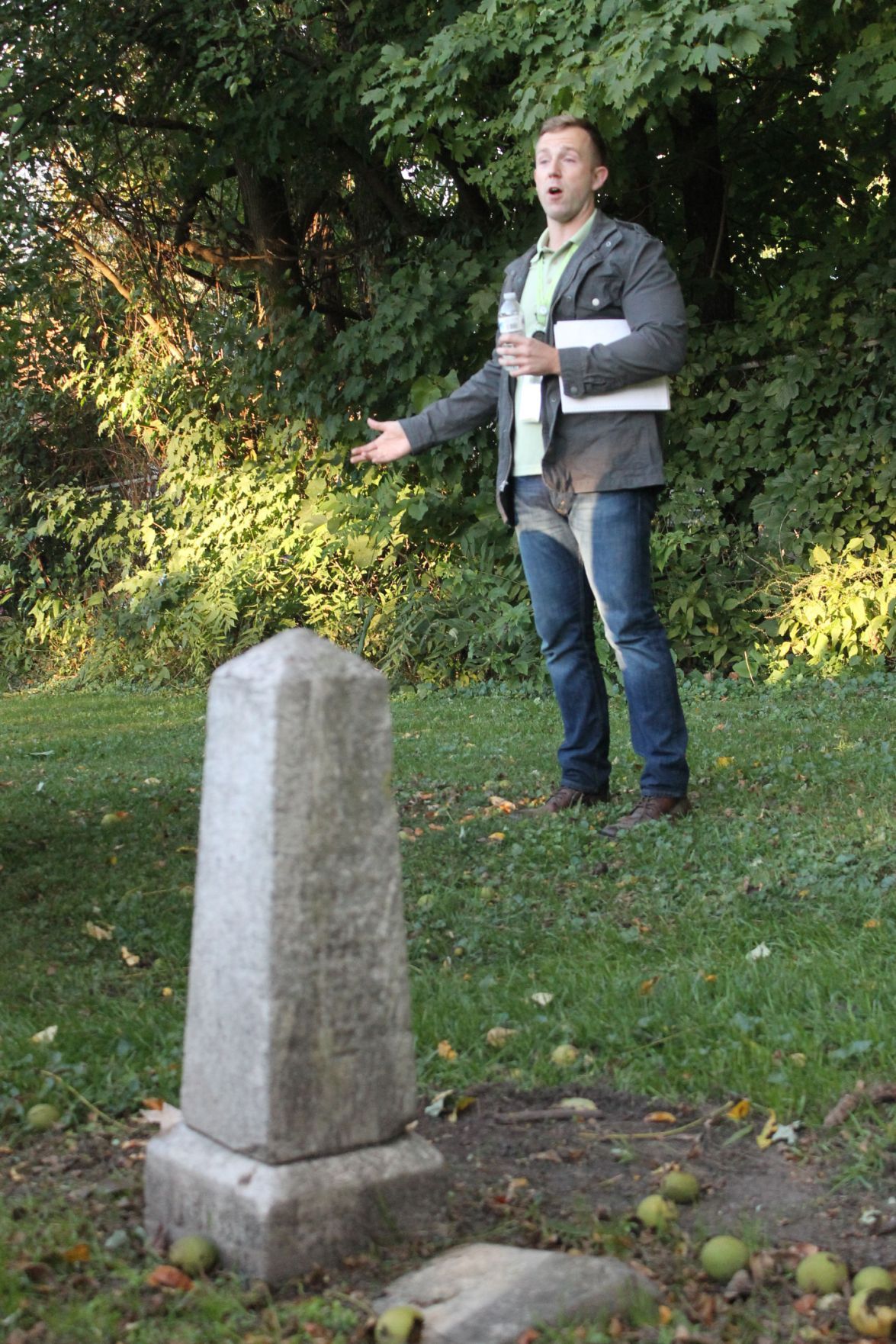 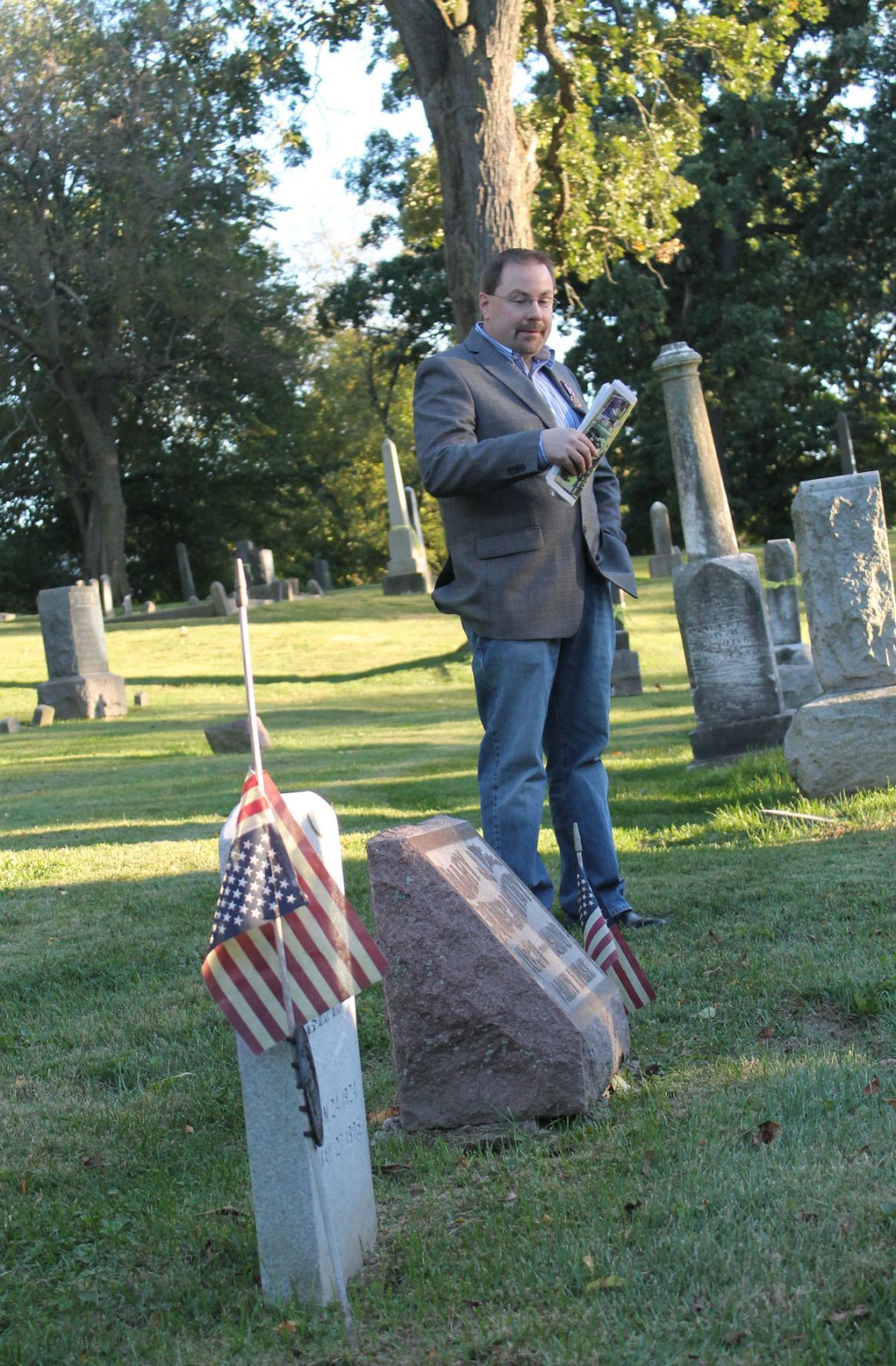 Steve Mockler, of the David E. Porter Camp of the Sons of Union Veterans, talks about the gravestone of former Valparaiso resident Mary McCarthy at the tour of Union Street Cemetery Thursday.

VALPARAISO | Some curious souls had an early start to Halloween Thursday.

Porter County Museum Director Kevin Pazour led about 50 people on a tour of Union Street Cemetery, as one of the museum’s regular Thursday evening programs.

Trying to beat the setting sun, Pazour and Steve Mockler, of the David E. Porter Camp of the Sons of Union Veterans, visited about 10 grave sites and related the stories of the people buried there.

Now owned and maintained by the city, Union Street Cemetery was acquired by land grant between 1835 and 1836 by early Valparaiso resident David Cheney, said Pazour.

The cemetery includes a historical “who’s who of the community,” Pazour said, as among the 900 people are buried there are three mayors, county sheriffs, war veterans and some of the city’s former prominent businessmen and their families.

However, Pazour said, all the graves cannot be located because many were left unmarked and several headstones are now gone.

The city is embarking on a project to restore the old headstones, Pazour said, many of which have been pushed over by vandals over the years. Such headstones are encircled with yellow ribbon.

“The city is meticulous about resetting the stones and preserving them as much as possible,” Pazour said.

Pazour and Mockler told stories about the many characters within, including “Uncle Joe Marks,” who engaged the neighborhood children to collect scraps for his foundry.

“He was crazy, to say the least,” said Pazour.

Ruel Starr, who has “one of the nicest stones in the cemetery,” lived from 1804 to 1875 and was one of two veterans in the cemetery in the Blackhawk War of 1832, Pazour said.

Sue Laatsch, who attended with her husband, Mark, said the couple is “into history.”

Debbie Oelling, who has lived in Valparaiso nearly all her life, said her best friend in elementary school lived just down the block. She hasn’t been in the cemetery since that time.

“We used to play here,” said Oelling. “We would sneak over here because we weren’t supposed to be here. We would pretend and create stories – that was fun.”

The last burial on the grounds was in 1973 and it is now considered a closed cemetery, said Pazour.

That makes the cemetery a museum in itself, Pazour said.

“We need to continue to tell these stories … so these people are not forgotten,” said Pazour.

The museum will conduct a repeat tour of Union Street Cemetery at 2 p.m. Oct. 17.

The Union Street Cemetery in Valparaiso dates back to 1839, when David Cheney's son Solomon died and he knew others would need to be buried, too.

CHICAGO | It reveals the details of a storied Crown Point colonel's final moments, spinning in his saddle at the Civil War's Battle of Gettysb…

One Hundred Fifty Years Ago: The War is Over, Now What?

Historical and genealogical groups across the country have been commemorating the sesquicentennial of the Civil War. The last four years have …

They're lively folks ... for corpses

HAMMOND | Visitors to Oak Hill Cemetery got to meet soldiers, freedom fighters, educators and immigrants during the Hammond Historical Society…

About 50 people learned the history of Union Cemetery Street at a tour provided by the Porter County Museum Thursday.

The grave marker for George Salyer contains the inscription "Pa sleeps in Jesus."

Steve Mockler, of the David E. Porter Camp of the Sons of Union Veterans, talks about the gravestone of former Valparaiso resident Mary McCarthy at the tour of Union Street Cemetery Thursday.