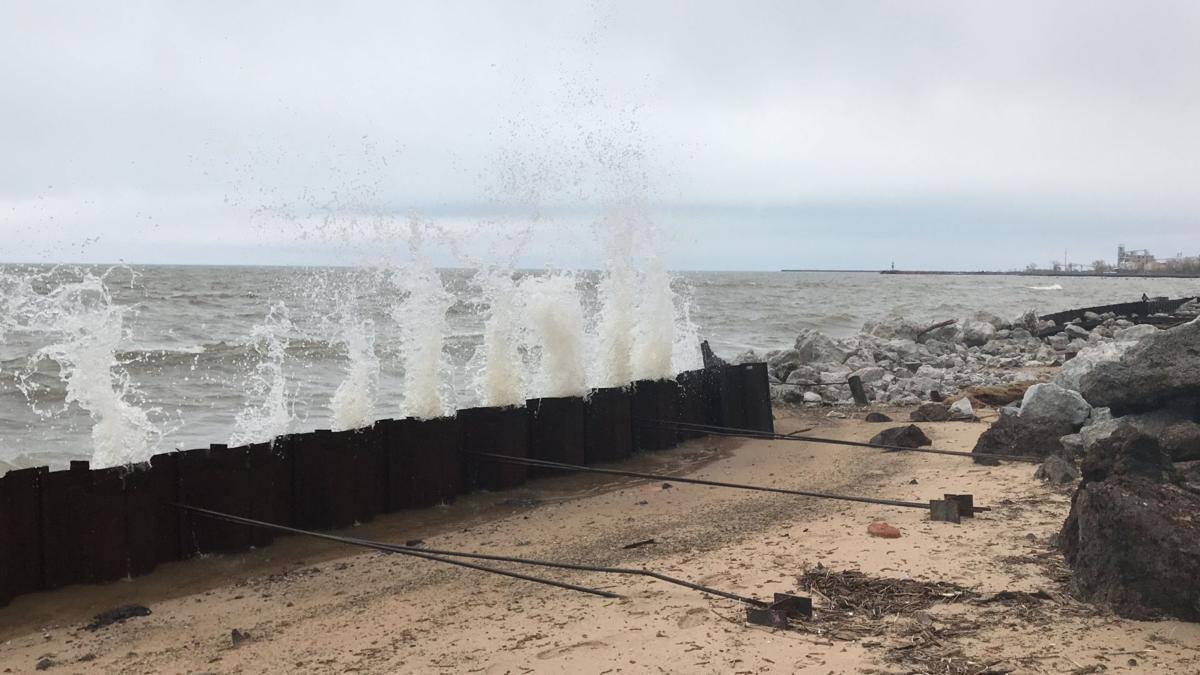 Waves pound an intact seawall just west of a section in Ogden Dunes that collapsed in a storm earlier this year. 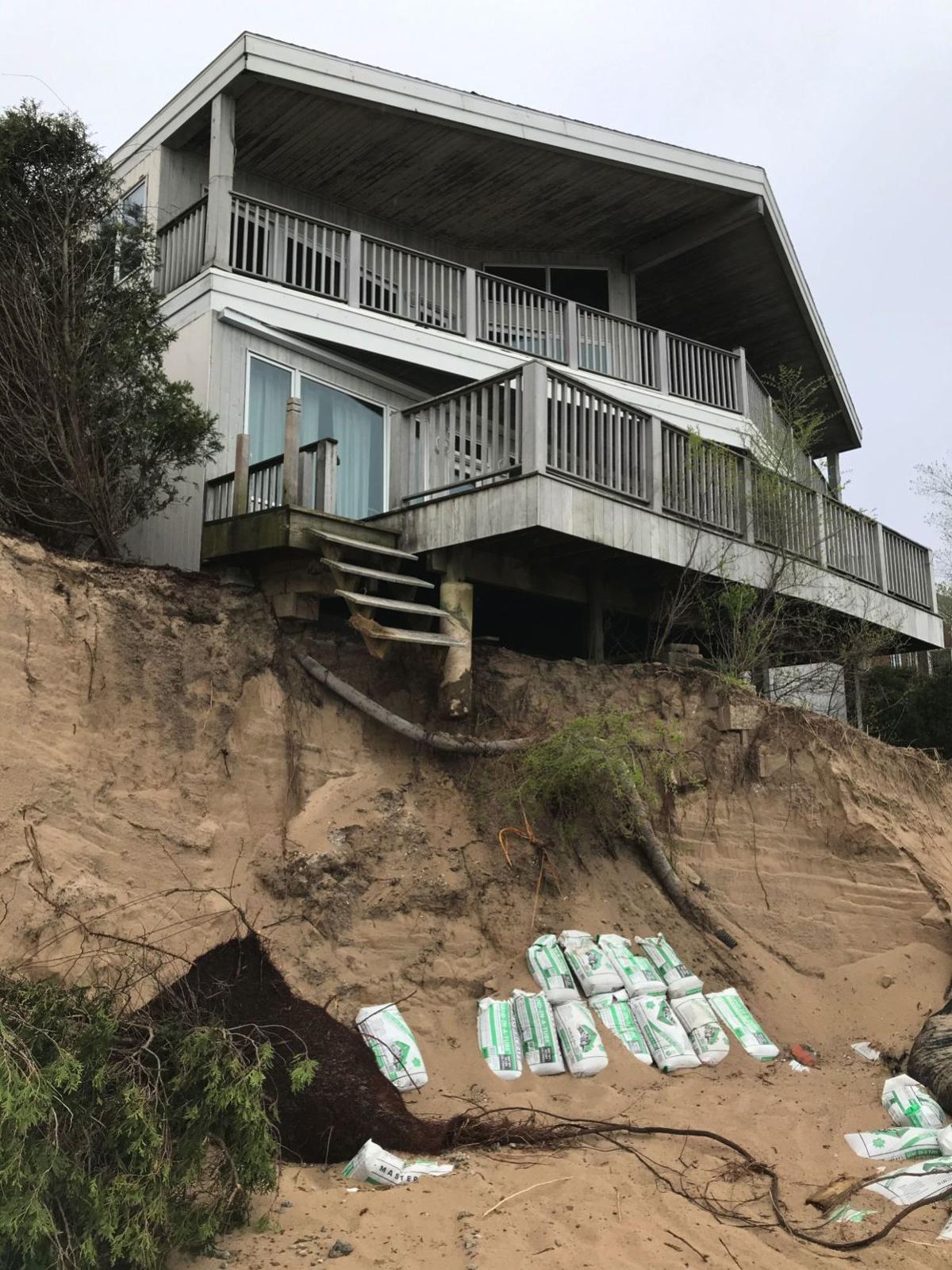 Steps from this Ogden Dunes home once led to the beach, but erosion has eaten away at the beach. Emergency repairs to seawalls along the Lake Michigan shoreline were stopped Sunday by National Park Service rangers. 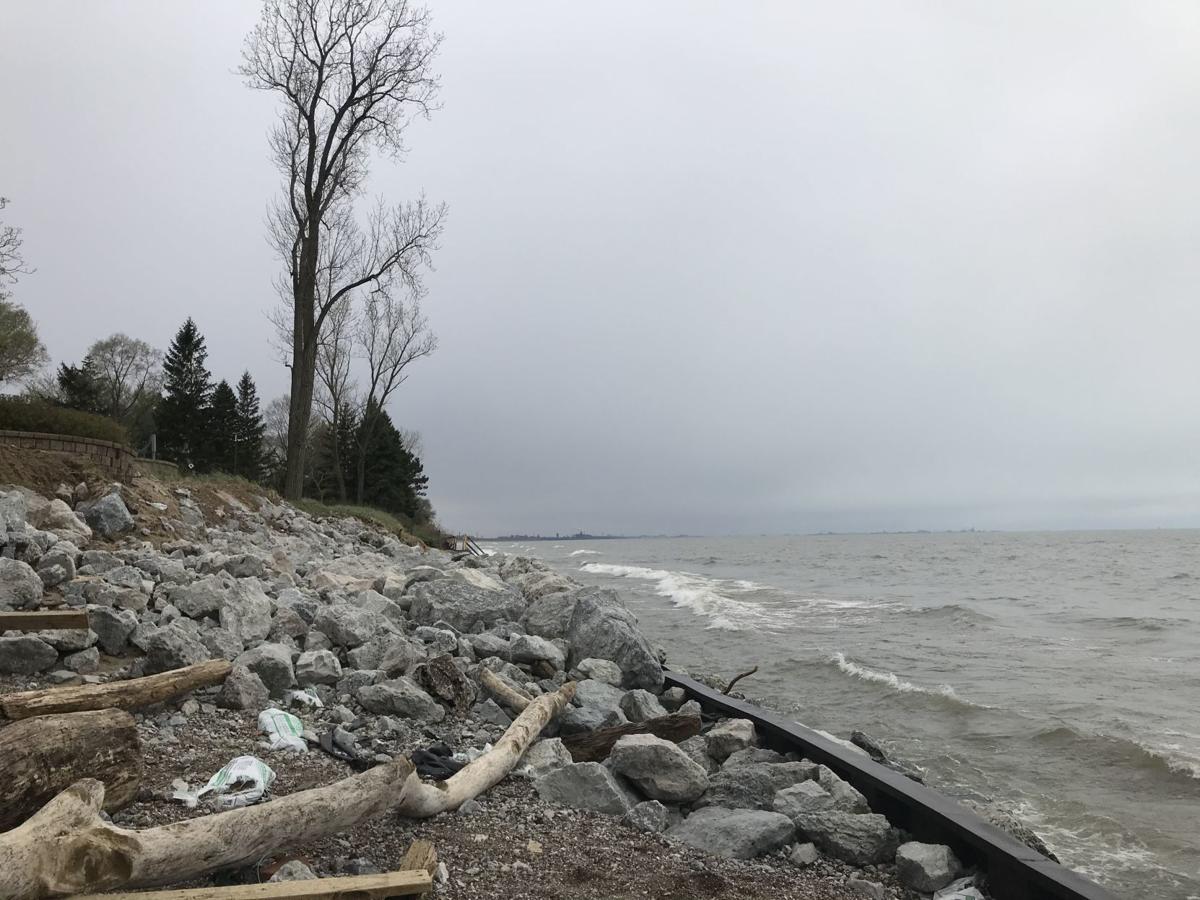 Large boulders are being added both in front of and behind seawalls in Ogden Dunes to protect homes from erosion.

“We asked them to stop Saturday, and they said they would, but didn’t, so we issued citations on Sunday,” Indiana Dunes National Park Superintendent Paul Labovitz said Tuesday.

The town had an emergency permit from the U.S. Army Corps of Engineers for the repairs, but that was contingent on getting permits from other state and federal agencies, including the National Park Service, Labovitz said.

“We thought we were completely honoring the Corps permit,” said Rodger Howell, chair of the town’s Beach Nourishment and Protection Committee.

The U.S. Department of Justice agreed to the plan for emergency repairs, and a federal judge gave his blessing, Howell said.

The town is locked in a battle with the National Park Service and other agencies in a federal lawsuit filed on behalf of the town earlier this year.

Labovitz said the citations were issued as a way to bring a decision on the question of whether the repairs should be permitted.

“A rogue agency is violating an agreement that the federal government has made with the town,” he said.

The dune protecting homes along Shore Drive is being eaten away by Lake Michigan’s relentless pounding. Lake levels are at a record high.

“Homes and foundations are at risk,” Howell said.

“This area has the highest erosion rate in Indiana,” Howell said, because construction of the Port of Indiana/Burns Waterway disrupted the natural flow of sand along the shoreline and has starved the beaches in Portage and Ogden Dunes, Howell said, which is backed up by the Coastal Zone Management Act.

A sliver of beach is all that’s left on the west side of Ogden Dunes, and there is no beach left on the east side.

“We have very deep water along a seawall” as a result, Howell said.

“At the same time, we are fighting weather and harassment from the National Park Service,” Howell said. “We thought we were going to make some progress over the weekend.”

The repairs damaged the dune along the lakeshore, Labovitz said.

“The dune in front of the town is gone,” Howell said.

The contractors were cited for failure to obtain a permit, operating off a designated route with resource damage (the dune) and violating a lawful order — the order issued Saturday.

The town has sought to put boulders north of the seawalls, on the lake side, to absorb some of the impact from waves and reinforce the walls. Boulders absorb wave energy, while seawalls reflect it, Howell said.

For work on the south side of the seawalls, on town property, no state or federal permits would be needed, Labovitz said.

“We’ve been providing recommendations to those folks for the six years I’ve been here,” Labovitz said, but the residents don’t want to heed them because it would encroach on their private property.

“You’re taking out a town because of that? That’s essentially what he suggests doing,” Howell said.

Lake County Sheriff Oscar Martinez has seen a lot in his 27 years in the force. Working to intercept drug trafficking on Lake County interstates, he shares the most bizarre hiding spots for contraband.

"United States law enforcement Park Rangers will be patrolling the area, and those found violating this order can be charged criminally."

Waves pound an intact seawall just west of a section in Ogden Dunes that collapsed in a storm earlier this year.

Steps from this Ogden Dunes home once led to the beach, but erosion has eaten away at the beach. Emergency repairs to seawalls along the Lake Michigan shoreline were stopped Sunday by National Park Service rangers.

Large boulders are being added both in front of and behind seawalls in Ogden Dunes to protect homes from erosion.